Tuff Scramblers is a stationary course built in Rehobeth, MA. 2 times a year they hold races on the course, once in the Spring and once in the Fall. This particular race was part of the inaugural Grand Prix. #racelocal

Parking: They changed this up a bit for this race, but I believe it was for the better. Elites, Volunteers, VIP team tent (if you were responsible for bringing the tent) were all able to park in the lot located on site. Everyone else was asked to park at a lot about 1/2 mile away. It is an easy and quick walk to the other lot, but also a shuttle ran in a timely fashion. The reason for the change, was to allow the shuttle bus a better turn-around situation. 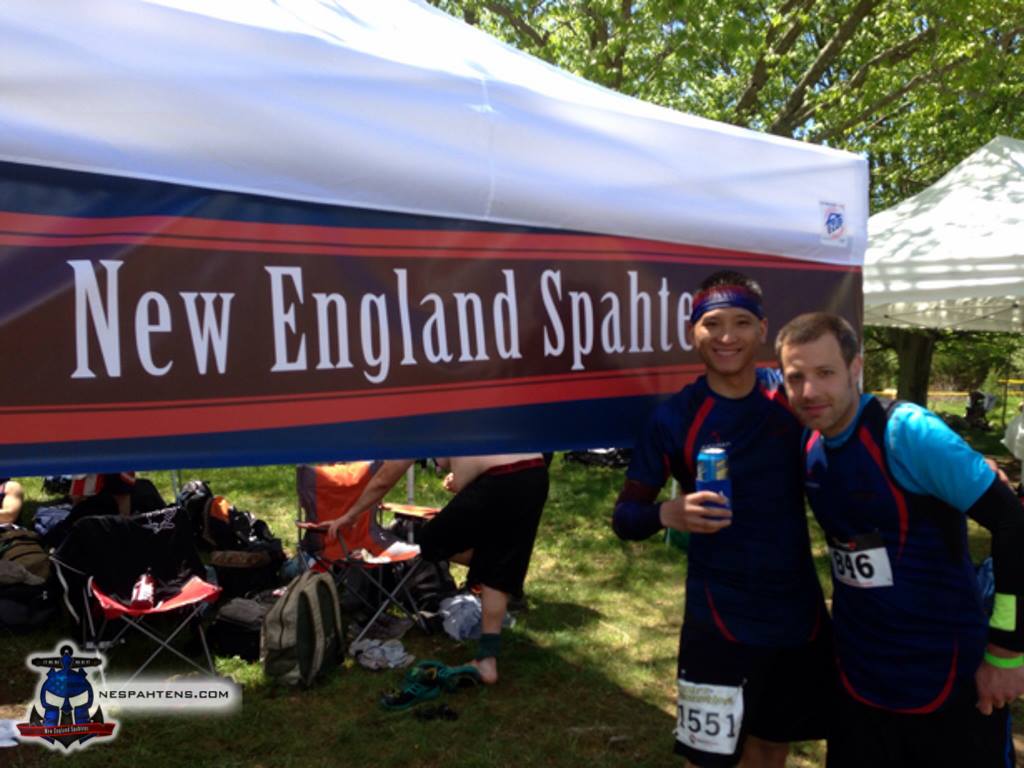 Registration: We arrived a little before 8, but at 8am registration was easy, organized, and uneventful. This isn’t a surprise, as I have never had an issue with registration. 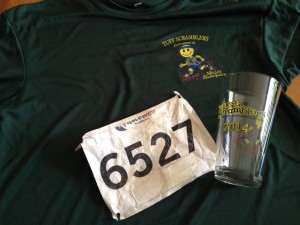 Bling: Tuff is one of the few races that doesn’t offer a medal. They do offer a pint glass to pair with your tech shirt. Both the glass and the shirt design changed this race.

Food: Included in registration was a free meal and a free beer. The food options were all tasty – pulled chicken, pulled pork, potato wedges, and a salad. The free beer was Naragansett. I’m not much of a fan of beer, but I did drink close to half of it.

Now, that we have all that out of the way, let’s talk about the course.

If you’ve never done a Scrambler before, Joe (the RD, and the mastermind behind this course) is really great about tweaking things for the next event. This was my 4th Scrambler, and while I generally know what to expect, I love that there is always a surprise!

Prior to everything kicking into high gear, Joe chatted with us to let us know he made the course longer and apologized for not making a lot of the changes he had planned due to the crazy winter weather.

From the starting line we took off into the woods and looped around to tackle a couple dirt mounds. Then it was back into the woods again, emerging to find another dirt pile, a mud pit bear crawl, and another dirt mound. The pit was new for the Spring 2013 race. It started off with just netting and no real supports to keep you from accidentally popping up between the netting strips. In the Fall race it had metal pipes holding the netting up, and many people earned some eggs on their noggins from smashing into them. This time around I was happy to see the pipes were swapped to PVC, but there were straps and rope used to keep the netting from sagging between the pipes. I saw a number of people struggle with having to duck under the ropes/straps and not eat mud in the process. I wonder if using some smaller PVC and tying the ends of the netting to it might be a better idea. I loved the challenge of ducking, and I enjoy the evolution of this obstacle. 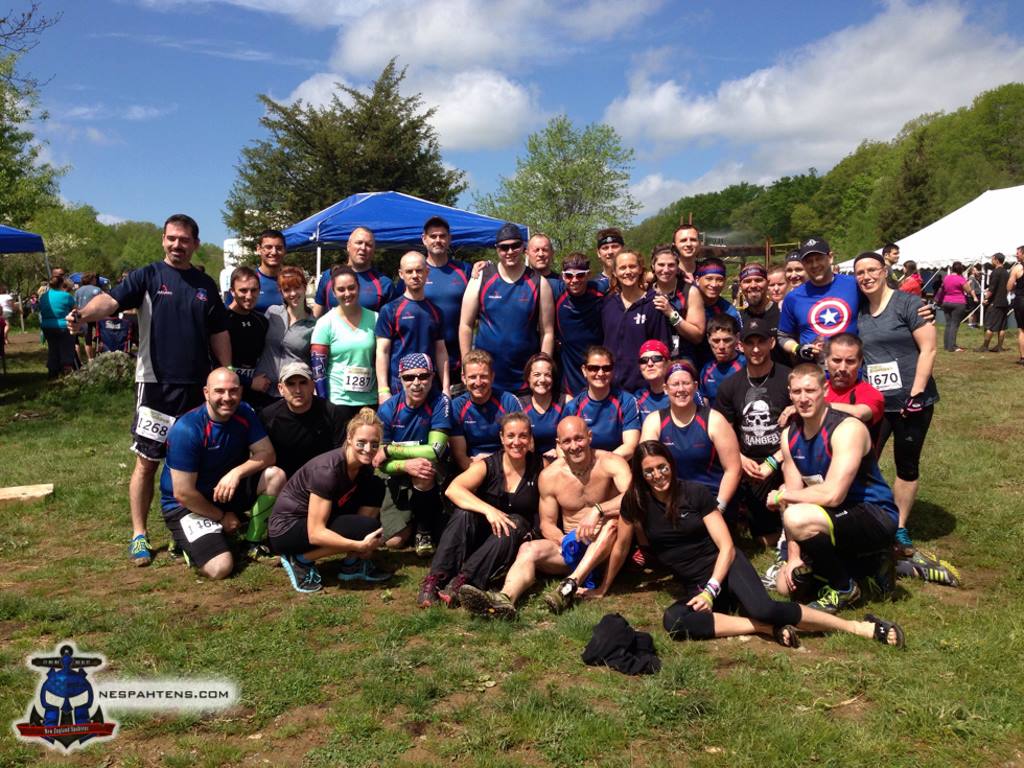 From this point it is a blur. I don’t ever remember a course, no matter how many times I run it. I know there was lots of mostly flat wooded trail, with rocky technical terrain (which is always fun and challenging). A few more mounds to climb, the wall of boulders to negotiate, the metal plate wall, the barrel hop, stone pillars, the log climb overs, balance beam, cargo net, vertical tubes, hay bale “marshmallow” tower, PVC a-frame, and monkey bars.

Newly added was a 6 ft PVC wall, with straps to help get you over. This was great! I had a couple of people in front of me so I used the time to figure out my plan of attack. Also, the newly added trail brought a new, and giant, boulder to get up and over. As I approached it I definitely said out loud, “Well, this is new!” as I negotiated a way up and over!

This course has always been fun and challenging, and I don’t believe this will ever get stale.

I ran with the team in the 11am heat, and I think toward the end of my race I bumped into the heat before. As a result there were some bottlenecks at the last major obstacles. Normally this wouldn’t be such a big deal, but this was my final Grand Prix race, so time mattered a little more. The cargo net had about 10 people climbing it with 3 deep waiting to tackle it. The vertical pipes were 2 people deep waiting, but while some people struggled others didn’t, so the wait wasn’t too long. The Marshmallows were easily 8 deep waiting, and there was also a line at the monkey bars. I blasted through all of these as fast as I could when it was my turn, but I easily burned 5 minutes waiting in lines at the end of my race. This race has definitely grown over the past 2 years, so it might be time to start looking into expanding obstacles to accommodate more racers. Granted, there were definitely other times where these bottlenecks weren’t present and therefore I may have just hit these obstacles at the peak time of the day.

Cleanup: Being that this race takes place on a farm, the changing rooms are horse trailers which always makes me giggle. They supply a couple shower stalls, and 6-8 free standing hoses. When I ventured over to the cleanup area it was a buzzing place. The ladies trailer had a line, as did the hose off area. I opted for an additional plunge in the pond and then changing my outer layers behind a tent, which I could have done anywhere since I decided not to strip completely.

Timing: For the first time ever, Tuff Scramblers used a timing company. Gone are the days of a volunteer at the end guessing your start time. The timing company used was Racewire, and as with anything new there were some issues. I checked the time sheet and didn’t find my name on the list. This was easily fixed by having a chat with the guys running the booth. I gave them my bib and my estimated finish time. They assured me that they were jotting down the bibs that didn’t beep, and hypothesized that the water crossing was killing the chips. No big deal. They will get the timing situation squared away I am certain. (UPDATE: Tuff Scramblers has already started handling this issue. They were not pleased with Racewire and are investigating their options going forward.)

It is evident this race is becoming more popular, and therefore more people are participating. We *officially* brought 40 people to this event, with many others running Elite or with another team. I am looking forward to seeing how this event continues to grow!

This was another great race put on by Tuff Scramblers and I can’t wait for the next one in the Fall! 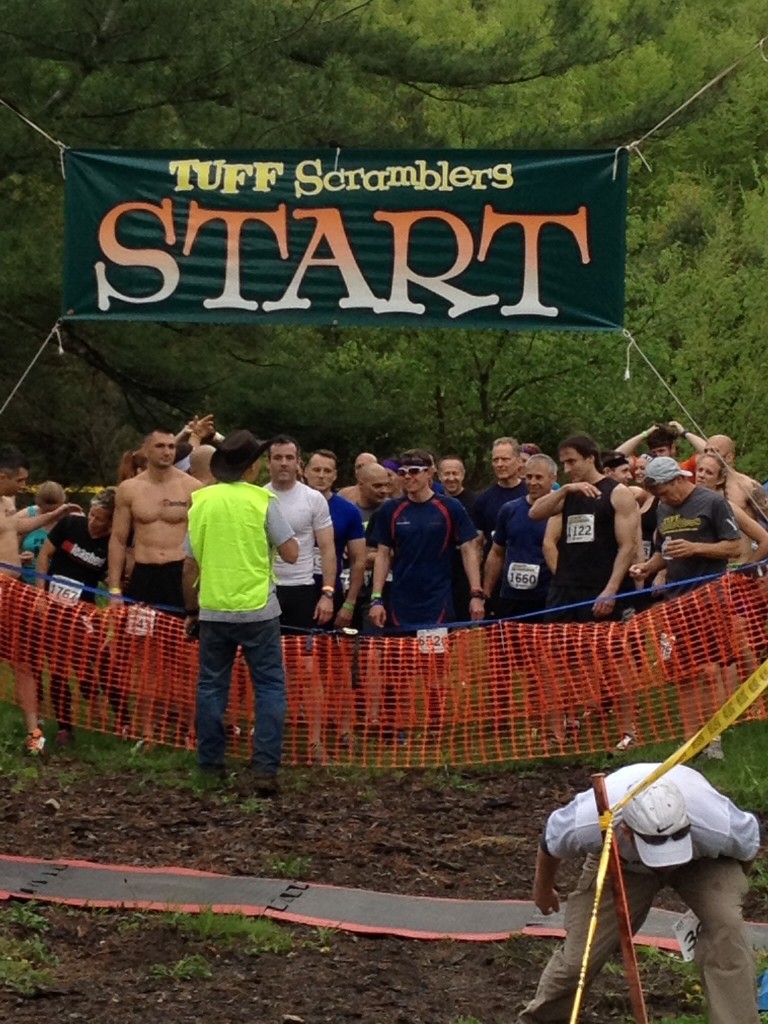