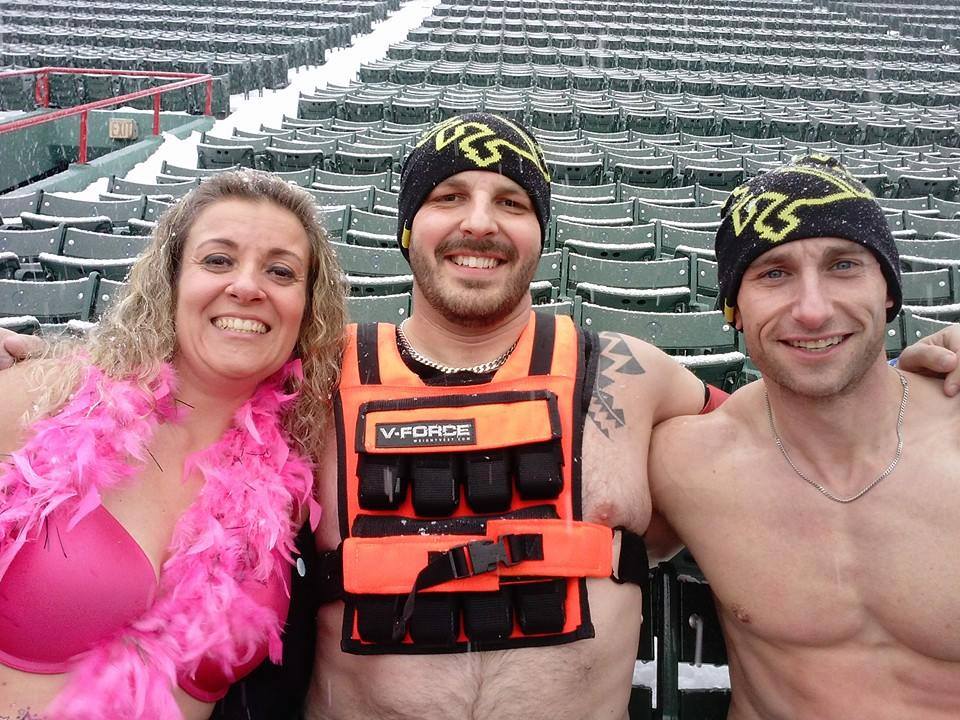 But, it’s some of the most fun you can have with your clothes off.

Seeing as the venue for Boston was Fenway Park, parking was entirely up to us – $10 for the day in the lot next to Boston Beer Works was super convenient, relatively inexpensive and close to the bar they had chosen as the base of operations.

As a VIP fundraiser (meaning I’d raised over $250), I received a really nice “I’m with Cupid” T Shirt, some awesome Me Undies boxers (women got some slightly more appropriate panties) and a silver wrist band giving me open bar until 4pm.

The bar we were based at was just over the street from Fenway, and we had taken over the entire place – as a self confessed grumpy stay at home old man, it’s been a long time since I’ve hung out in bars and clubs like this – the music was too loud for me and I couldn’t hear any of the announcers – while it was also very crowded, you can’t win them all 🙂

Communication from Melissa, the RD was excellent in the weeks prior to the event, and they were very supportive of our “5lbs for $25 donation” weight motivation – some people chose rucks, others sandbags, others (me) a weight vest – Fenway had zero issues with us bringing them in too, which was a minor concern prior to the event.

* Race Details
Cupids Undie Run isn’t a race. Sometimes listed as 1.5 miles, others 1 mile, I’d be surprised if we went that far, but I’ve never done a run with such a big grin on my face.

The festivities started in the bar – stripping off your jeans and tops to get to your under-roos in the middle of a bar in Boston is a novel experience for many of us, but once the ice had been broken, and you’d finally stopped staring at everyones boobs or butts or bulges, and started talking to their faces again (admit it, this happened to everyone!), it was pretty easy going.

Initially, we were a little upset with the venue – once the announcement had been made that Fenway was the venue, it was also announced that spectators wouldn’t be allowed in – for a spectator to join us for the two hours prior to the event, watch us run, and join us afterwards, they would also have to register to run – which by then was $50. This was a bit much, IMO.

The run itself started late – maybe 15mins – but once they opened the back door to the bar, and we saw the weather – big fat fluffy snow flakes were falling – oh yes, we were about to go run Fenway in our underwear, in the snow.

Surprisingly, we didn’t freeze! The warm bar, the running and the huge grins on our faces kept us toasty warm as we crossed the street, ran along the sidewalk outside Fenway, then turned into the concourse for a while. A short stretch in the bleacher stands gave us a view of the snowy field, then another lap of the concourse, before heading back to the bar and lining up for the bag check.

Most people likely hung out and went to the many bars in the area that were opening their doors and removing their dress code policy, but due to the snow, I had to bug out pretty quickly.

Cupids Undie Run surprised me. I thought it would be a quick fun blast through a one mile course, instead it turned out to be huge fun, lots of laughs, awesome photos and a great way to raise money for the Childrens Tumor Foundation (Boston raised more money than any other city!)

See you next year, in my underpants!