As a Spahten, we are privy to many races and OCRs that are going on in the New England area. We talk about who is going to which event and talk about how long the race will be. We chat a lot about training, techniques, times, scores, etc. All of us at some point made that choice to “get off the couch and get moving”.  NE Spahten Dennis Michaud had a unique opportunity to volunteer for the Biggest Loser Off-Road Challenge that took place during the Spartan Sprint at Amesbury. These are all people who made that choice to “get up and get moving”. Here is his experience as a volunteer. Take it away, Dennis… 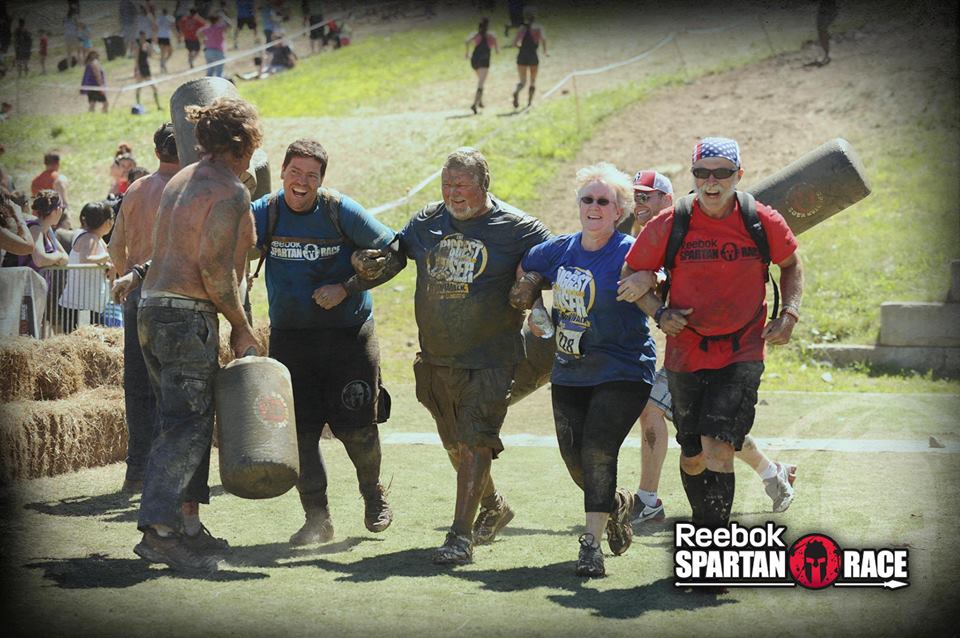 On Sunday August 11th during the second day of the Massachusetts Spartan Sprint another separate, yet equally impressive event was taking place: The Biggest Loser Off-Road Challenge as part of the Biggest Loser RunWalk Series. The Biggest Loser RunWalk is a non-intimidating race series designed to challenge America to get fit. You’ve been inspired by the hit reality show “The Biggest Loser,” now it’s time to get off the couch and hit the pavement and achieve your fitness goals. This race series will include a challenge for everyone. I should add right now that I have never seen more than an advertisement for the television show. I volunteered to be an on-course guide as a way to give back and pay forward something to the sport of OCR. It ended up being a bit more than I expected.

As a volunteer I was instructed to be there for 7am, no problem, checked in and was told I was told wasn’t needed till 8:30. Gave me a little time to actually check out the festival area and visit with a few early arriving NE Spahtens, make lemonade, right? I had an opportunity to observe the registration process and did appear a little disorganized, but considering the same folks were doing the children’s race, I was amazed at how smoothly it went. I should add that Hilary, another Spahten was a volunteer as well.

As 8:30 approached I made my way over to the area where the participants were told to congregate, a separate area off to the side. I understand the reasoning for the segregation, it was more to keep Spartan competitors out as than to keep the participants in, but some form of encouraging them to visit the festival area would have been nice. As well as a map of the festival area, nobody even knew where the porta-potties were. Finally, Dan Evans from Season 5 showed up, introduced himself a bit, and left to set up the course. Hilary and I helped hand out shirts and socialized a bit with some of the participants. Dan came back and made a few announcements, introduced Chris Davis who had a few encouraging words for the participants and finally it was time to make our way to the starting line. Hilary, Chris, myself and 1 other volunteer were going to be the on course guides. The group was divided into 2 waves with one guide leading and another doing sweep. Off we went.

The course was a shortened version of the regular course without all of the obstacles. The traverse wall, the slippery wall, the sand bag carry, and the “climb up and down” were not part of the course. I’m not going to talk about the course, that’s been done. I’m going to talk about the heart and the change I saw come over people I was fortunate enough to be with on the course. At the inverted wall it was “no way can I do that”. Well, then 1 person tried and with a little help from her friends, she made it. Then another person tried with the same result. Confidence was growing. The cheers and comments from Spartan competitors helped as well. There were a few who ended up not trying, and a couple who tried and just couldn’t quite get there. It was time to move on. I believe the next obstacle was the tractor drag. A little teamwork and everyone was successful, same at the Hercules hoist, they were starting to believe that hey, “I can do this stuff”. Now we came to the wall. Funny thing happened, it wasn’t “no way I can do that” it was “how do we get over that”, and most were able to get up and over, with a little help from their friends, and it was pretty awesome seeing their faces when they were on the other side. The monkey bars came into sight, everyone tried and with help everyone made it. Tire pull, everyone tried, some needed a little help, but some said I can do this, and did. Sadly, none of the group I was with stuck the spear throw, but not many Spartans did either. Onward to the barbed wire, crawl. You could not stop anyone from trying this one and all but one made it through, and the one was due to a knee injury suffered earlier on the course. Ok, it was time for the fun stuff now, jumping over fire and taking on the gladiators. Over the fire we went, down the hill and took on the gladiators as a team.

Before the challenge these folks sat around in their little corner of the festival, after they felt like they belonged and rocked the medals they earned. The support and positive comments made by people doing the Spartan race along the way really meant a lot to the group I was with. The change in that occurred in the around 2 hours it took was nothing short of remarkable. That I was able to witness this transformation made it one of the most rewarding days of life.

If you are reading this and are wondering if you can do this or if you know someone who wonders if they can all I can say is: Yes, you can.