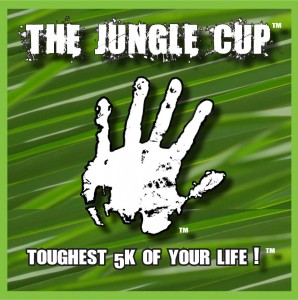 I used Jungle Cups picture only as an example.  I can’t condemn them because well they don’t have a race for us to run.  Which is the issue.  When and if they do, provided everyone got a fair refund or exchange for the cancelled race we will evaluate them specifically.  My choice for using their picture is that We as a team hung a lot of merit on this race.  It would have been our first large team event of 2013.  The first showing of Us en masse and generally a good time.  But not long ago Jungle Cup was the Tarzan Cup which did not fair altogether to well.  We heard reports of “its a different race, different owners, everything has changed.”  Well we have heard that from other races as well, and theses races seem to be closing up shop as soon as a few pre-sales come in.

You remember this garbage from last year?  Well there’s more like it popping up everyday.  If you must know it is currently $65 for the 5k and its Aug 17th.  I will not link this crap to the blog.  You’ll have to go see for yourself.  My point is, generally speaking, obstacle course racing really got going in 2010.  2011 saw great leaps in the big 3:  Tough Mudder, Spartan Race, and Warrior Dash.  2012 was a break out year for the sport to stretch its legs.  Thats also the same year that the fly-by nighters, beggars and hangers-on really started hanging out their shingles.  Or shit on a shingle more to the point.

It reminds me a little bit of the American Old West.  Somebody strikes gold and over night there’s a hotel, 2 general stores, 3 corrals, 20 saloons, 40 brothels and a Church.  Provided they build the church out of the city limits.  Everybody rides the strike, staking claims and gouging the hell out of everyone till the whole thing is nickel and dimmed out, and there’s nothing left but holes in the ground and the dilapidated facades and hulking shells of past glories.

It seems like everybody’s race is the best, the toughest, the hardest, the most extreme and every other superlative adjective they can think of to try and market their brand of Snake Oil.  There aren’t any Rainmakers folks. There are however some good solid races out there.  Everyone deserves a chance but reputations are fickle.  I don’t want to hear that the course was designed by a SEAL.  Oh really will we be conducting long, arduous, clandestine, nightime operations?  A course designed by former Green Berets.  Cool will we be training rebel militias to over throw totalitarian governments?  How about a course designed by trail runners and playground architects with degrees in engineering from MIT and WPI.

To these upstart races.  Don’t be the next Tough Mudder.  Don’t say your going to be bigger than Spartan Race.  Tell me I’m going to have a good time.  Show me that you spent enough of an investment in your race, i.e. the obstacles, to warrant the price you are charging for registration.  I like Spartan Race and Hero Rush and Tough Mudder.  I run their races because I get exactly what I expect from each one individually.  If your a local race or a regional race.  Be that. Be the best of that in your area.  Bring in local vendors.  Exploit the positives of your venue.  Chose a venue in an area that can stimulate the local economy.  Do your research!  I have run local obstacle races.  They are fun or can be.  Even if its just to have a beer afterwards.  I understand sometimes obstacles are built and installed the night before.  They aren’t going to win awards; but they don’t have too.   If thats what you do, fine.  But don’t tell me its tougher than Tough Mudder and charge $100.  Tell me its a challenge and I’ll get a tech tee-shirt and a pint glass.

So buyer beware.  Do some research.  Heres the way I look at it.  If its a choice between an established race and an upstart, and they’re both charging on the same scale, somebody has delusions of grandeur. Support new races and local mud runs but don’t throw away your money or your time.