There have been moans of pain about entering in your races for the #racelocal events the last few years…and mostly groans and moans of pain from Paul Jones. If you think entering the races has been difficult for you, tracking and tracing of runners, what they’ve accomplished, what gear they’ve earned, and how many points they’ve won is painstakingly difficult. 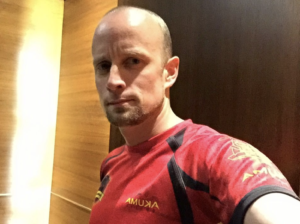 My name is Ben Norman, you may have seen me at races here and there, I typically wear Team Mike McNiel drill shirt with “Ninja Ben” on the back. My favorite color is orange. I am a software developer and technology educator in an industry called the “internet of things” or “IoT”. If you’re not familiar with the “internet of things” take a look around and look at all of the devices and gadgets connected to the internet. Those devices have software running on them, they have a pathway to the internet so they can transmit data, and there typically is some application, either mobile or web (or both) that displays the data. An example of an “IoT” device is a Nest Thermostat. You won’t see me too much this year because I have my eyes on only a few races, and instead I’ll be devoting my time to building out a ridiculously crazy application that makes life for everyone in #racelocal easy.

The application development started back in October, I got a really good understanding from Paul what was needed for him, and for our racers. Thought long and hard about the user experience, and I’ve been working behind the scenes the last few months. This week, we’re very close to launching our MVP (minimal viable product). I’ll be posting updates about the application going forward under this category. The posts will include release notes and updates. Feel free to comment and leave feedback, as well as, post any software bugs you encounter along the way.