Tuff Scramblers are a well liked, local operation – and we brought a group of Spahtens to their event in May, 2013. Sandy write us a fantastic review, and you can bet we’ll be back!
http://www.tuffscramblers.com/
If you also attended, we’d love to get your feedback too – it only takes a few minutes – https://www.newenglandspahtens.com/submit-a-race-review/

Tuff Scramblers has held four events prior to Saturday. Unfortunately, timing did not allow me to run either of the two in 2012 and I had never heard of them in 2011. After running on Saturday, this makes me very sad. They put together a great event!

We arrived fairly early in the day and managed to get one of the last two parking spots in the on-site lot. This was very convenient for us, but after talking with other team members, the remote parking would have been almost as easy. The remote lot was a mere half mile from the venue, which made for a fast and easy walk. If you didn’t feel like walking, they ran a shuttle bus back and forth on a really quick and convenient schedule. Most that I spoke to took the bus if it happened to be there and walked if it wasn’t. Either way, parking was easy. There was a $5 fee per car, which seems to have become the standard. I’m fairly certain, this was to offset the cost of running the bus all day.

Check in was in a very small area, but since this isn’t an outrageously large event and the starting heats weren’t overcrowded, it went very quickly and smoothly. You turned over your id and they handed you your bag, your drink/over 21 wrist bands, a pint glass, and your t-shirt (a nice tech tee in whatever size you requested when you signed up). It took less than a minute to be all set to go. They also had a bin full of samples to hand out where you could take what you wanted. This would be easy to abuse, but I only saw people taking one of each available sample and leaving what they didn’t want. Personally, I like this because I was able to leave behind the things I know I didn’t want which kept them from being wasted.

Spectator check in was equally as easy. Passes were $5 each unless you brought two food items to donate to the local food pantry. I love this! I will gladly bring a bag of food if given the option and Vince said there was already a bit of food in the truck when he brought his to the check in table.

There were a few tents set up for vendors and I remember seeing the Army, the Air Force, B-low the Waist (apparently a game that has been going on since 1929 that involves secret hand signs and slug-bug like punching that I simply can’t fathom being fun at all (but then again, I don’t think I’m their target audience!)), and Muscle Milk were all there. Muscle Milk had free samples available for everyone which was nice. There were also a few physical challenges that people could choose to participate in – a salmon ladder (if you don’t know what this is, check it out on YouTube – http://youtu.be/T0Vd74et8ss ) and a push up station where you had to put your feet on a suspended board while you used suspended rings as handholds. This one looked like a great challenge and I meant to do it. Unfortunately, I remembered about 10 minutes after we left. 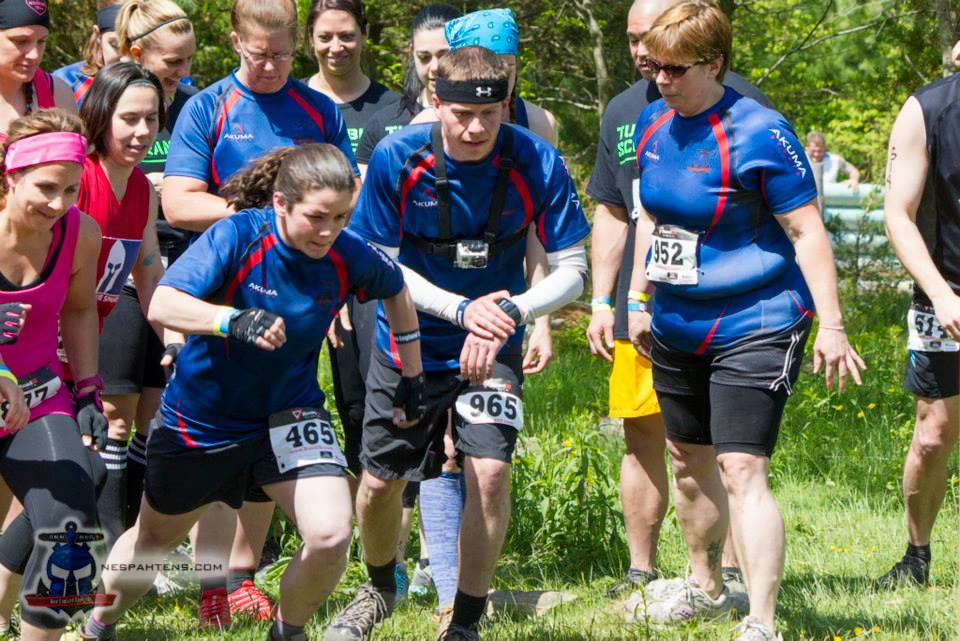 There was a DJ running music throughout the day and someone would periodically come on the loud speaker to warn you what wave was coming up soon and tell you when to start lining up. The DJ lowered the music a few minutes before each scheduled wave so that the announcer could thank everyone and remind us why we were there (donations were made to the Gloria Gemma Breast Cancer Resource Foundation) and about the expected teamwork on the course (if you see someone in need, be sure to help). A quick 5, 4, 3, 2, 1, GO and we were off!

The course was great! We looped around in open grass fields and went across the festival area several times. This was great because it brought spectators right up to the action. They had the course well marked off, and even though spectators were able to cross the path of the runners, I didn’t see or hear of anyone getting in a runner’s way. They had a cattle gate very close to the start of the race that actually held the people back until the last runner passed at the beginning of each wave. I thought it was fun to see them all packed up behind the gate as we went out. The trails through the woods had a good mix of small hills, small stream crossings, and mud. They also had a lot of rocks. I mean A. LOT. OF. ROCKS. For seasoned trail runners, I’m sure this was pretty easy stuff. For those used to only running on well groomed and obstacle free trails, this was a bit of a challenge. I pushed myself to go pretty fast until the second time I almost rolled an ankle – and after that, I took the really rocky areas a bit more slowly. This served to reward those who train in those terrains while punishing those who don’t. Again, I think this is a good thing.

The obstacles were more varied than I have seen in any other race. They had some standards such as a low crawl through mud, over/unders, a cargo net, pipes used as balance beams, and monkey bars. They had good use of natural and man-made terrain such as tall dirt/mud/rock hills, some boulder hills, a slippery mud wall with a rope assist, and a short swim. Then, on top of all that, they had some really unique obstacles as well. First, there were giant concrete filled barrels spread across a small pond where you had to jump from one barrel to the next frogger style. Then, there was a second, similar obstacle with concrete pillars of varying heights to jump across. There were two “walls” made up of large PVC pipes stacked on top of each other that were a little tricky because they were so slippery. And, finally, there were large tubes  positioned at about a 45 degree angle that had water cascading down inside that you had to crawl up through to the top of a hill. To make this possible, there was a rope hanging down through each tube to help pull yourself up, but there was not much room to maneuver inside! I definitely give them an A+ for creativity on their obstacles!

Our photographers were able to capture just about every obstacle on the course as they were mostly very centrally located around the festival area. The runners did the trail portions in loops away from the center in order to get the distance in. This made it extremely spectator friendly and added to the enjoyment of everyone. I give them an A+ for this as well. In addition, each wave was sent off 45 minutes after the previous one. This allowed the fastest runners in each heat a fairly free course through most of it. They would catch the slowest runners of the previous heat, but not until pretty close to the end. There was virtually no wait at any obstacle which is impressive!

I only had a couple of negatives to point out for the day. First, the water at the finish line was not obvious and we had to search for it a while before finding it. Turns out it was close, but not well marked and easy to miss with people standing around unintentionally blocking it. They also ran out of water before the last heat even started. If they restocked again later in the afternoon, I missed it as each time I walked by it was still empty. Second, there were no recycling bins for all the beer cans and plastic bottles that were consumed in the festival area. It is possible that they contract with a trash company who will sort it all out off site, but if that is the case, it wasn’t made known. And finally, they had four semi-private shower stations available (which was not a negative at all!) but there were no changing tents anywhere. This meant that if you were needing to change, you were taking up a shower area and keeping others from using it all the while. I would love to see the same shower area with two small changing tents nearby for men and women. As it was, we made due holding towels for each other as we hid behind a tractor on site.

These are very minor negatives for what was a great day! Overall, I have to give this event an Excellent rating. They have announced a fall event for October 19 and I am very excited to participate again this year. I hope we will have a large contingency there!