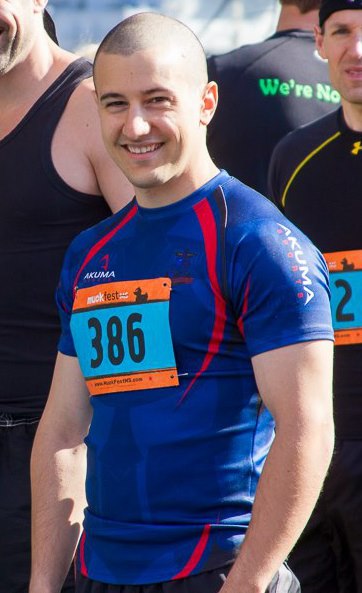 * What is your day job, and do you have other hobbies?:
Warehouse packing and shipping. Other hobbies include gaming, art, and various fun physical activities such as swimming, mountain biking, hiking, kayaking, skateboarding and more.

* When did you start obstacle course racing? Tell us about your first race
I started obstacle racing in June 2012. Although my first obstacle course was the Tough Mudder in May of 2012, that’s not considered a race but a challenge. Although I had just started running sometime around the winter months in preparation for Tough Mudder I found my first competitive obstacle race, Xtreme Urban 5k, to be very exhausting. I remember walking for a little bit at one point because I ran too fast in the beginning. It was a really fun race though. I really want to crush my time this year.

* What attracts you to obstacle course races? Why do you keep coming back?
Being able to run and do various fun and interesting obstacles in between makes it a lot more exciting than just racing in a regular running race. I keep coming back because they’re fun and I always want to get faster and that much closer to the elite level.

* What are your training and/or diet routines? Do you have other athletic pursuits?
My training and diet have varied a lot lately. Its been a little tough working my schedule around different events that happen throughout each week like the D5K, SWONEC (a Navy Special Forces training group), and Sunday mornings at Lynn Woods. I think I’m getting into a set schedule though finally. My workouts currently: Sunday mornings anywhere from 5:30/6am to somewhere between 8-10am which involve carry heavy weight up hill, some running, and various exercises. Monday’s I’ll do an LSD swim and maybe a push-up, sit-up, pull-up workout. Tuesday’s are track intervals. The past couple Wednesdays I’ve been waking up early in the morning before work to get some swimming in to work on technique for about 20-30 minutes. After work I go to the Danvers 5k, but I usually do the 15k instead and hangout after. Thursdays I go to SWONEC around 4pm after work. SWONEC stands for Special Warfare/Operations New England Candidates. It’s training for the Navy’s Special Ops. Because of work I c
an’t get there for the first hour which usually involves a run. I usually do a lot of swim training there. Friday’s are either active recovery days where I can work on my swim technique for a little bit or just rest. Saturday’s are usually race days or something Challenging I can come up with to do for the day, usually involving tempo/race pace running.

My other athletic pursuit which is partially described in what I do on Thursdays is to train to get into Air Rescue in the Navy. I first looked into the Coast Guard but I’m basically at the age cut off so I decided on the Navy. I wanted to get into something physically challenging with minimal combat. It seems to me like an excellent career path. I could go into more detail about it but I don’t want to overload the question.

* Were you always athletic? If not, what athletic changes have you made to keep up the obstacle course race lifestyle?
For a long period of time I wasn’t. When I was young I liked to run but it wasn’t a training or scheduled thing, just a fun activity I would do for a short period of time. I also played baseball in the little league for a while and quit before moving up. I played video games frequently and got into skateboarding from middle school into high school. I got very serious into competitive gaming in high school. In a local competition I won a computer processor valued at $1000 that I still have in my computer today. Long story short I started working out in 2010 with a friend and got hooked quickly. I was able to get very lean, bigger, and stronger. Around 2012 when I started to hear about obstacle races I got intrigued and switched over to running alongside working out.

The biggest changes I’ve made for obstacle course racing are running and trying to mimic some of the obstacles from the races in my training.

* Who, alive or dead, would you invite to run an obstacle course race with you?
I would love to run with Dean Karnazes. That guy is very inspiring and has extreme aerobic capacity. It would be interesting to see how he does on obstacles.

* Tell us a fun fact about yourself that we may not know!
I played Call of Duty: Modern Warfare for 24 hours straight once. I planned it out and it was sort of a self experiment.

* What are your goals? Next race, next season … what’s in your future?
My goals are to improve my PST scores for the Navy and become a faster runner and swimmer. For a while I wanted to become an elite obstacle racer and still would like to. If my training for Air Rescue allows me to get to that elite level that’s great, if it doesn’t I’m not too worried about it. My main focus is the Navy because it’s the career path I’ve decided on and the training for it is more important than obstacle racing.

My main goal is to get the Air Rescue contract before next year. If I don’t I will just join the regular Navy.