This post is contributed by Aaron Farb, who ran the multi-lap BFX.

Battlefrog returned to New England for its second year Saturday once again using Carter and Stevens Farm in Barre. Battlefrog has had a bit of a tumultuous year with spending large amounts of money on a College Bowl Game yet laying off many staff members, so it was not without some slightly lessened expectations that I approached the race. Last year saw Battlefrog bring a ‘fun’ race, but for many, not very challenging obstacles outside of a Platinum Rig with a very high failure rate. As some had experience with Battlefrog 2 years previous in New Jersey where the race had massive builds and amazing obstacles, this was a severe disappointment, and how they bounced back this year was yet to be seen.

Battlefrog has 3 different race options – Elite, with mandatory completion of obstacles, regular racing and Xtreme, which has racers attempting as many laps of the ~ 8k course as they can, having to start a last lap by 2:45pm. I had signed up for Battlefrog Xtreme, so I arrived at the venue by 645, parking in one of the private home lots across from the venue entrance, so I did not have to wait on any buses. I did not hear of any giant lines for the buses and the biggest team perk of some free parking was taken advantage of by multiple members, so a nice perk if arriving early. The check in process was super easy, a big board with bib numbers on it and walk up to the reg desk, showed my ID and that fast was thru. The merch tent was directly behind the registration and to go into the fest area, racers had to go thru merch – a smart idea on the race’s part – make your merch visible to every person coming in, spectator and racer alike. It wasn’t a big interest for me, but liked the idea. 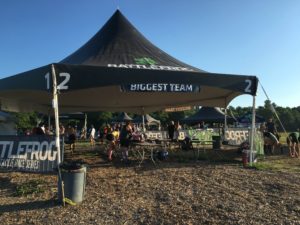 As the biggest team, Spahtens had a team tent in the very center of the festival area – great location and ability to see everyone start and finish. I set up camp in the BFX area, just to the side of the Delta Cargo and finish area, a bit out of the fest area, but a great location for racers as we peeled off to refuel for each lap. While the terrain isn’t always the greatest challenge at Carter and Stevens, the food is a refreshing change from many venues. As usual, the farm had multiple options – wood fired pizza, Boar’s Head deli sandwiches/wraps, pulled pork, burgers and their great ice cream. I did hear they ran out of burgers, but the pizza was still cooking and I enjoyed a spicy turkey sandwich once finished – very tasty.

There were ample porta-potties and amazingly, there was even staff that was routinely visiting them and making sure they were cleanish (it is a OCR after all) and full of toilet paper. 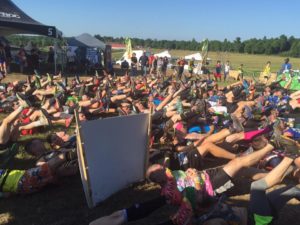 7:45 was the mandatory BFX orientation and Coach Pain lived up to his name. Previously, BFX orientations consisted of a briefing, getting your bands and pumped up; this year Coach Pain led us in almost a half hour of planks, drops, push ups, flutter kicks and leg lifters. A short break, and a great start line speech/motivation by Coach and we were off. (Side note – now that Sean hasn’t been seen at Tough Mudder in awhile, Coach Pain may be the best start line motivator in the biz now.)

And now, the part we all hate at Carter and Stevens – the course and terrain. The good news is, this is the best course that I, and everyone polled, have seen at Carter and Stevens! It still has many portions of cow holes that make ankle turning an every step hazard, but compared to previous courses here, there wasn’t near as much. On a venue that has had now 4 large races at it in the past year, BF even managed to find new terrain – a great stream bed with tons of rock hopping for almost ⅓ of a mile, all the while on a slow climb. Yes, I did say climb at C&S Farm! It’s not huge when compared to Killington or such, but have to like progress. Total length was right under 5.5 miles by my watch (sorry, I kept my watch running for the whole BFX, so total of 22.1, divided by 4 =5.5) 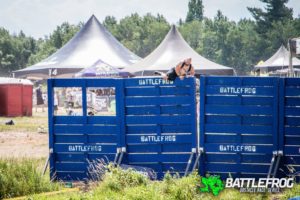 This year, Battlefrog had tiered obstacles – many obstacles had 3 lanes/options for Novice, Intermediate and Elite. These included most walls, traverse wall, rope climb, Platinum Rig and carries with different lengths. The tiers were things like extra steps on walls, lower rope climb bells, Platinum Rig with different difficulties/spacings and lines. This was a great innovation for the race – talked to multiple people who loved the option to push themselves and if they failed, to attempt an easier choice. All obstacles were able to to be attempted multiple times, and some included a penalty loop for failure, which was a short loop having to carry a 50lb wreck back and a jerry can of water. Obstacles were all very well built, even after 4 laps and late in the afternoon 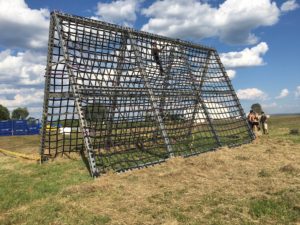 I didn’t see anything broken or issues other than paint chips. As a general, many obstacles were very similar to last year: 60 degrees (steel bar open invert wall), 12’ rope walls, Platinum Rig, Hooyah (wall climb up to a water slide that actually was a water slide this year). They did remove the much maligned and not very sturdy sternum check this year. The course did have 4 water stations while running and throughout the day I never saw an issue with water supplies, cups or volunteers to staff the stations or any obstacles, so kudos on getting some very important details right!

Some highlights – Platinum Rig – having multiple difficulties made this normally super difficult obstacle possible for many more people. Having shoulder issues recently, I made use of the novice lane on this one and made it each lap. Monkey bars were great – nice sized pipes with a bit of spin, but not much on a slight pitch up, then back down, all over a deep pool. Hooyah was great fun – a difficult wall climb on the elite side to a slide into a pool – great way to wash off with only half a mile left in the course. I never experienced a back up of more than 2 or 3 people in line at an obstacle, so not sure if the tiered obstacles helped more on this or if racer numbers were a bit down. 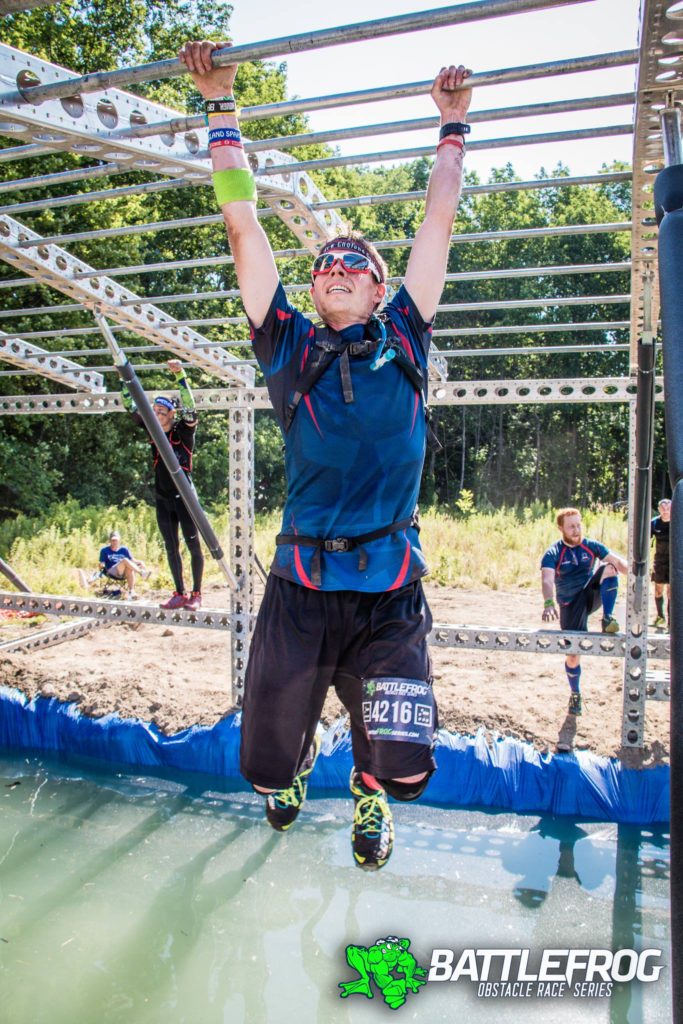 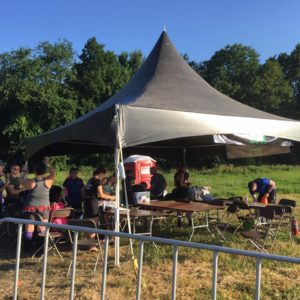 For BFX, we finished the Delta Cargo Net and moved to the staging area to recharge – this was done right for sure – easy access to course and restart, giant tent, cooler with water and ice refilled throughout the day, tons of bananas, Kill Cliff (only coffee flavor…) and our own porta-pottie. Before we started, the RD did come over to the area and make sure we knew that we could get water as needed and that the food and beer was to be available until the last person left, not shut down once many had left. For me, this was a great plus – doing multiple laps at many races, often I finish and find that food vendors and beer are either closed up or only selling what has been hanging around for hours.

My negatives on the course – 3 carries in a 5.5 mile course – they all were different things – bucket of gravel, wreck bag and jerry cans – variety is good, but when your course has ‘28’ obstacles with 6 of them being ‘Over, Under, Through’ counted as 3 separate obstacles and the riverbed, hill at the end of it and a gravel ledge with a 2’ drop also counted as obstacles, that leaves 22 obstacles in a over 5 mile course. And 3 of them were simple carries. Perhaps I’m being a bit harsh, but lots of open space in this course, from a national race that has a budget much greater than some local races that manage more obstacles. I know I had hoped that Battlefrog would have more obstacles and last year was an aberration and that the real Battlefrog was going to be more like the 2014 version I had heard so much about. In no way am I saying it wasn’t a great course and I didn’t have a good time with a great challenge, just a hope for a bit more as well. I did love the riverbed, and not sure of a solution, but it was hard to be much more than single track as there isn’t a very defined line, so did have some slow parts here simply from people in front – just a difficult passing area. I can’t say I minded too much as it was such a great addition though. 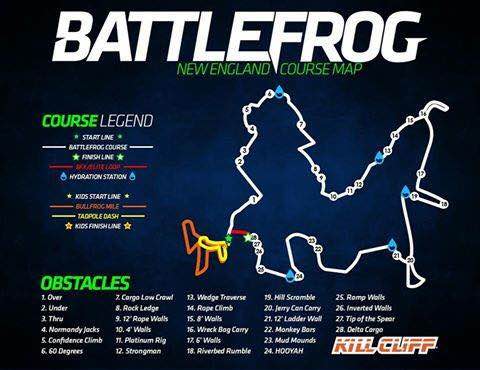 I had made a goal a few weeks previous to attempt 5 laps in the day, but as the day drew near and I saw the temps predicted, I wisely adjusted my goal to 4 laps knowing that the heat would slow me down. I completed the 4 laps of BFX and finished to a festival area still functioning and selling food and allowing us to enjoy the new brewery at the farm – yes, the farm now has a functioning microbrewery (growlers and to go selections available at the brewhouse next to the bus stop)- the beer selection was limited to their summer ale, which was quite tasty! So happy to not have to worry about showing up for a race to finish with nothing but Coors available – another plus for C&S. When I finished, I did have to go search for a water bottle and the only flavor of Kill Cliff, a Battlefrog sponsor, was coffee – an issue all day from what I heard. Medals were right there, and the medals all look very good in my opinion, with the BFX being huge, along with stars to signify number of laps completed. Also right in the finish area were the t-shirts, a nice blend – quite soft and sizing seems pretty right, typical fare for the races now.

Battlefrog advances in some good ways and makes a great showing at Carter and Stevens. There are still issues with the race that haven’t been solved from last year, but a nice improvement over last year showing they listened to feedback and leaving me hopeful that Battlefrog will solve its internal issues and move even further back to its 2014 showing.

Got your own opinion? Leave your review here – https://www.newenglandspahtens.com/community-reviews/