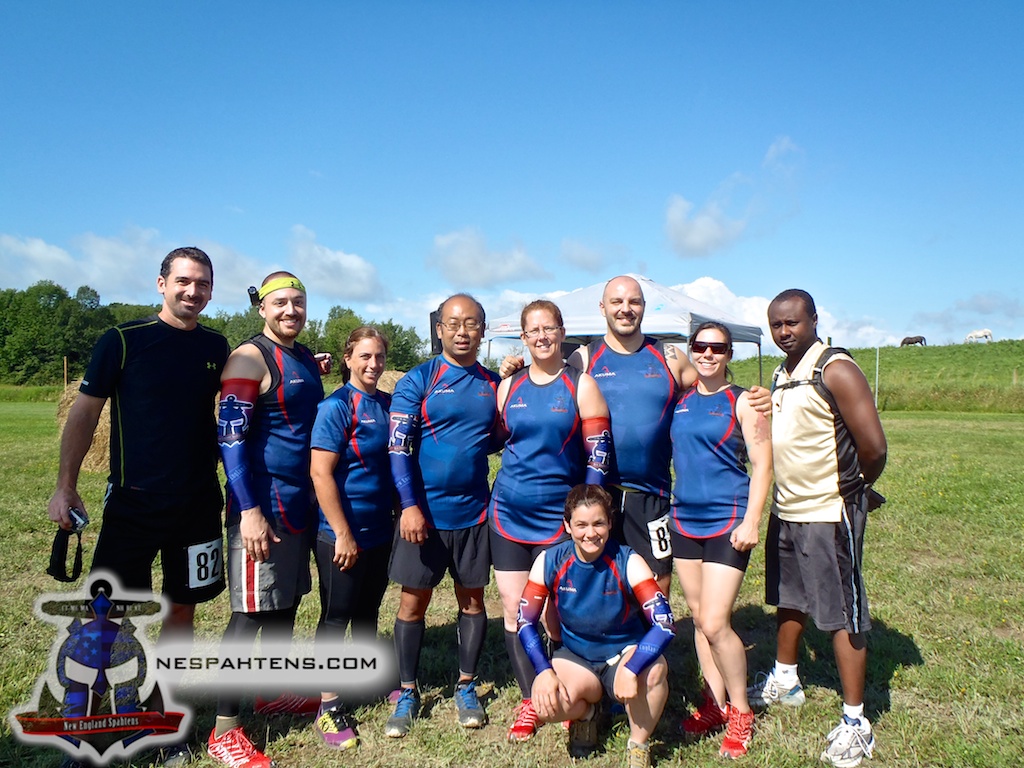 If you’re new to the community, you may not be aware of Shale Hill Adventure Farms in Benson,VT. Owned by Rob Butler, Shale Hill is a permanently installed, approximately 5 mile course – featuring a heavy base of obstacles and rough terrain, it’s a fantastic training ground thats open for private runs, training – and for 2013, the four race Benson Bear Challenge.

For those who are not new to the community, you’ll be aware that we LOVE Shale Hill. For good reason. It’s a gem in the New England OCR crown, and if it wasn’t for it’s slightly out of the way location, we’d be up there way more frequently than we are.

As it is, we brought a small (but mighty) team back for the third running of the Benson Bear Challenge – and, again, it was epic.

This time, we stayed at the very convenient, and very nice Falkenbury Farm guest house – less than three miles from Shale Hill, it was $150 between 7 of us, and Vince put on a fantastic cooked breakfast on the morning – really, it doesn’t get better than this! Driving up on Friday night and staying somewhere so close with your fellow team mates makes this a really easy, convenient night out.

If you aren’t too familiar with how things run at Shale Hill – this is grass roots racing. There are very few theatrics or big budget bells and whistles – the focus is on the amazing course and obstacles.

Parking is easy, with a very short stroll over to the area of the field with the registration tent. Here, you’ll be greeted by name if you’re a regular and handed your bib number, race T and some other schwag. Shale Hill is using sticky bibs – but after the last race, where lots of them came off somewhere on the course, they now also provide pins. I don’t know that anyone has perfected the bib system yet – but having options is good. Being grassroots and low volume, Shale Hill doesn’t use timing chips yet, so it’s not the end of the world if you lose the bib!

Waves went out on the 1/2 hour, with maybe 20 or 30 people per wave – Rob giving his safety and course briefing before each one. The penalty system was explained (spiderman pushups for failed obstacles), and some quick tips on some of the more challenging obstacles.

One thing it’s worth pointing out to people who have never had the Shale Hill experience – Rob is evil. Rob is a genius. Rob puts up obstacles that make you approach them, and go “huh? who the hell thought of *that*?” – quickly followed by “and how the hell am I doing it?!” – but here’s the thing. For all the intimidation of big, scary, complex obstacles – or obstacles that require massive upper body strength – there is so much emphasis put on technique, and instruction and encouragement, that it doesn’t matter if you try it three, four or ten times. The volunteers on the course are always amazingly encouraging, and Rob is omnipresent on his four wheeler – always ready to hop off and teach you.

As a result, after three trips around the course through the year, I completed some obstacles that I’ve never done before – or have better idea’s on how to approach them when I hit similar obstacles at other events. If you can train and race and learn on a course like Shale Hill, anything you hit at a Spartan Race or Tough Mudder will be relatively straight forward. Sloping walls, rope climbs, walls – and more – Rob installs his bigger and tougher and harder, then puts an inordinate amount of effort into teaching and encouraging people who simply don’t think they can do it – and getting them over it anyway.

The course map for this run was much the same as previous races – but of course they had installed a few new things.

The pond, instead of being a simple rope to pull yourself across is now a tyrollean traverse – and the opportunity to play on one of these was pretty neat.

We now had a new wall obstacle – a 10′ or so wall, with a step, that transitioned into an overhanging ledge – and some ropes to help you make that transition. Something that sounds scary – but with the right technique and with seeing others do it ahead of you – it was amazing how many people managed it!

Of course, there are also the old favorites – the lincoln logs and abacus ladder, the 130′ of traverse walls and three separate weighted carries varying between 1/4 and 1/2 mile in distance – some of the old not-so-favorites, like the tarzan ropes 🙂

Basically, Shale Hill is pretty much the best venue to visit if you are interested in trying some challenging obstacles in a very supportive environment. It’s welcoming, challenging – and when you cross the finish line, you will be chilling out with tens of your best friends, eating amazing food from a local VT restaurant, drinking locally sourced chocolate milk – and rock your heavy weight race T, and spinning race medal with a pride you don’t get from an easy, not so challenging 5k OCR – you know you really earned this one.

Rob had also brought in a couple of vendors this time – Another Best Day shirts who’s gear looked great – but I didn’t get time to check them out – mainly because I was spending lots of time with the Icebug vendor – and there will be more to come from them in the near future.

I know my featured reviews usually cover more obstacle and race specifics – but we’ve been over those with the Polar Bear Challenge and the Benson Bear #2 review. What I really want to get across for folks here is that Shale Hill is a welcoming, challenging OCR venue, with few distractions – their job is to simply make you a better OCR competitor – whatever level you are at.