Recently, we had a busy weekend, with 7 OCRs going on – one of those was held at our favorite outdoor OCR venue, Shale Hill Adventure Farms, and was the last in their Benson Bear race series. Stephen was there, and sent me in a review (and I was lax in getting this out on time!). 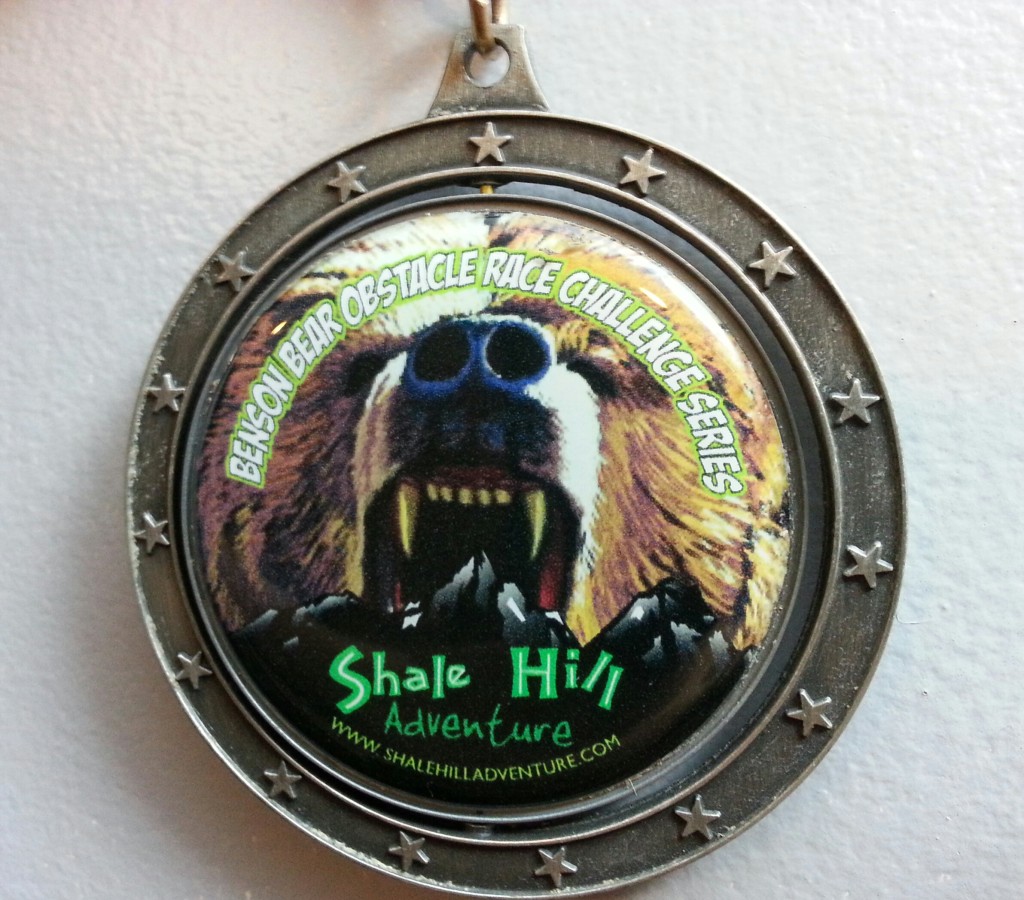 The Benson Bear 4 was the last race in a point-based series located at Shale Hill Adventure Farm in Benson, VT. Owners Rob and Jill Butler promote Shale Hill as a grass roots obstacle course and they have certainly achieved that. The majority of the competitors were locals familiar with the course and each other, which gave the day a fun and friendly atmosphere. Both owners were very hands on and available to all, with Jill working the registration, while obstacle mastermind Rob drove around the course checking in on racers and volunteers on his 4-wheeler. Both were very friendly and stayed and chatted with everyone post-race. 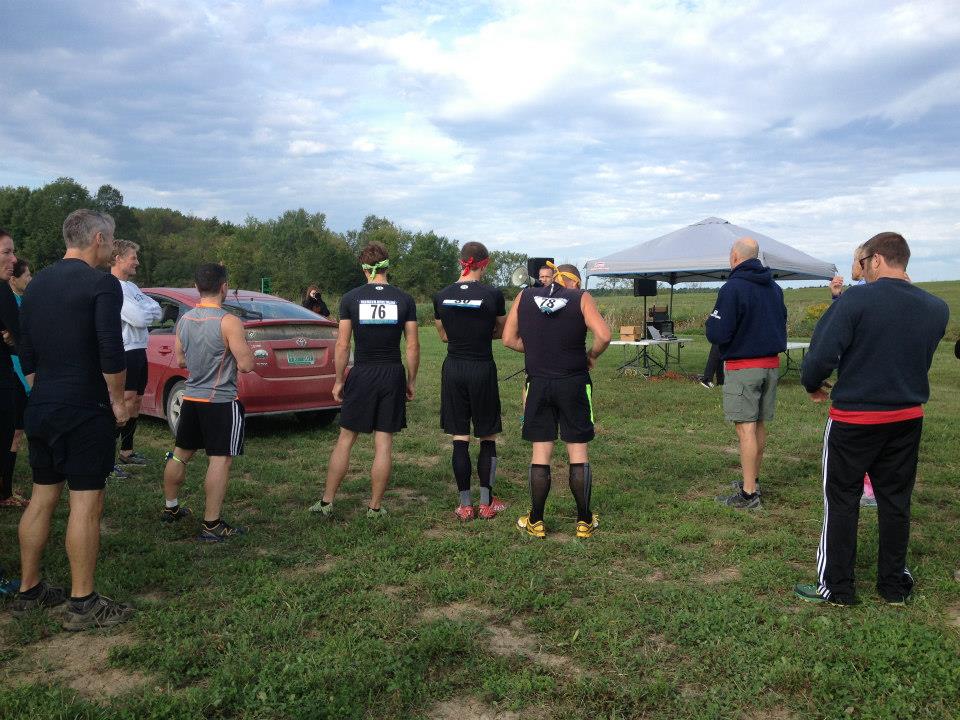 Shale Hill is located about 4 hours northwest of Boston, in the middle of rural Vermont farm country.  Beautiful landscapes and scenery made the long drive pass by rather quickly, and the empty 4am roads certainly helped too! The free parking was more than adequate for the turnout, and was just a short walk to registration. Two port-a-potties were provided, as were three (warm water!) hoses for cleaning off after. Registration took less than a minute, and the packet included a racing bib and a bag of goodies with a t-shirt, dog tag, and car sticker.

About half an hour before the elite heat started, Rob got on the bullhorn and gave a welcome speech that included need-to-knows like penalties, new obstacles, safety guidelines, etc. The DJ then turned up the music and promptly at nine o’clock the elite heat began, with a few more heats following every half an hour. 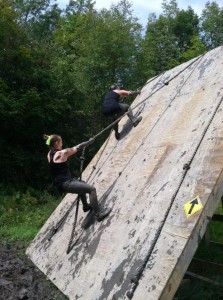 The fixed course does a great job utilizing all aspects of the local landscape, including hilly fields, a pond, muddy forest trails, and slippery shale-covered slopes. There are around 50 obstacles spread throughout the 5 miles, so I won’t go through each one specifically. Just know that as a builder by trade, Rob’s primary focus for Shale Hill is creative, innovative, and just plain nasty obstacles. Included in Benson Bear are the usual obstacles that can be found at the Spartan and Tough Mudder races, but specifically designed to be harder and more challenging. The monkey bars span 140 feet and include an incline section and spinning bars. The three (3) different weighted carries are all for significant distances and require climbing over more obstacles while never letting the objects touch the ground. The 90lb rope pull requires not one, but six repetitions (five for the ladies at a lighter weight). The tyrolean traverse seemed to go on forever, the rope climb requires you to pull yourself up onto a platform at the end of the rope, and the 130 foot traverse wall is broken up into four sections connected by beams that must be crossed going hand over hand while hanging… talk about evil and twisted!

There are also several out of the norm obstacles that really display Rob’s creativity. One obstacle combines wall and rope climbs, another called the Abacus looks like a cargo net made by giants, and the Anaconda can be brutal at the end of the race.

Of special interest to those who have raced at Shale Hill before is the addition of two new obstacles. The first was a standard tire drag out to a certain point and back. It was shorter and easier than the three carries, which leads me to believe that by the next race there will be some new twist to it. The second one is called The Loom, and is strategically placed about three-quarters of the way through the race. I won’t spoil the surprise by going into too much detail, just know that it requires a lot of full body strength, dexterity, and flexibility… all at a time when exhaustion is setting in and those things are severely lacking!  But in the end that’s why Shale Hill is regarded as one of the best and most difficult ever created.  A few racers who attended the Benson Bear 4 said that though the Tough Mudder and Super Spartan are longer in distance, the Bear was more difficult hands down. I consider myself in good shape, and the Benson Bear 4 was the most physically demanding challenge I have yet to encounter. 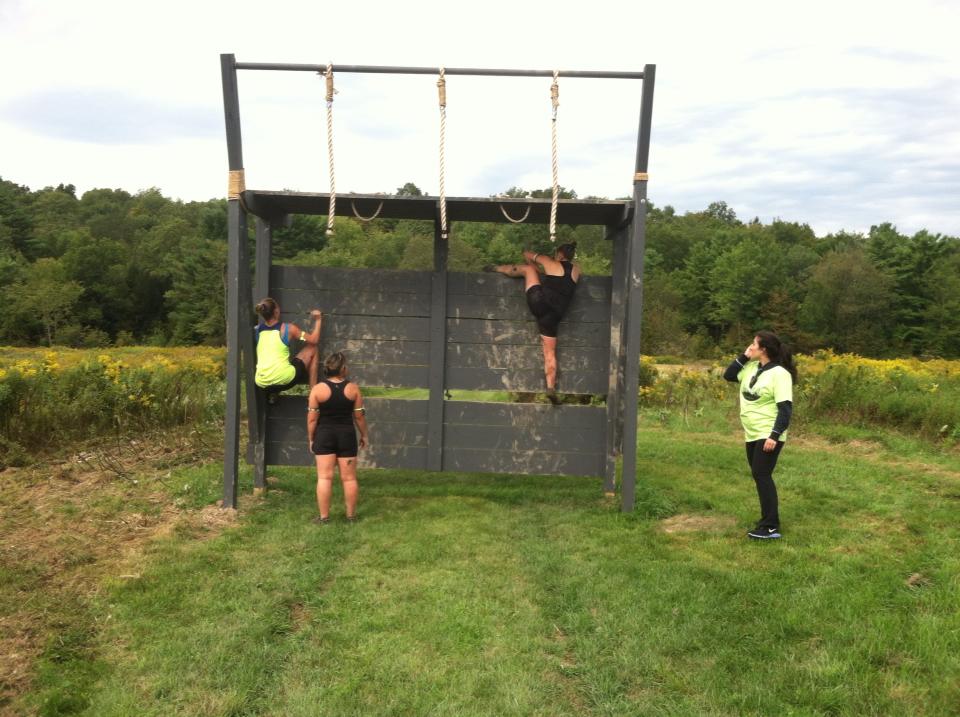 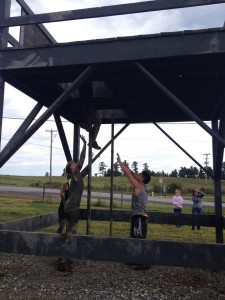 At the finish line there was a crowd cheering racers on for the last obstacle, and bananas and chocolate milk were a welcome prize at the end. The race bling was a cool looking piece featuring a roaring bear on a spinning medal with green ribbon. Homestyle burgers and grilled cheese were some of the great grub supplied by local restaurant The Wheel Inn. Also on hand was Gary Richter, a representative from Icebug, a Swedish shoe company specializing in trail and orienteering shoes. Gary was extremely knowledgeable about both shoes and feet, and even taught me how to lace up and tie my new Spirit3’s in four different steps to make sure they fit my feet correctly. Gary was also very generous, giving the most enthusiastic and motivating volunteer a free pair of Icebug hiking shoes. What got me most excited was his talk about Shale Hill and Icebug collaborating on a shoe specifically designed for obstacle course racing! The post-race party was small and quiet, and highlighted the only downside of the day… the small turnout. There were only a few dozen people who took part in the race, and most were locals. While this made for quick registration and minimal waiting at obstacles, it really was a shame to see such a great race and event get such few participants. Hopefully it was just a case of bad timing, as that weekend was packed with races, including the only nearby Super Spartan in New Jersey.

Two other things to note, the group I went with consisted of three other racers and three volunteers. The volunteers had an extremely enjoyable time, and said that Rob, Jill, and the other workers made their experience very easy and comfortable… and were given either two free training sessions or a free race for their time! All three said they’d definitely volunteer again. Also, for those racers making the trip to Shale Hill from a distance and want to spend the night, I highly recommend Falkenberry Farm. Only a five minute drive from Shale Hill, it was just $150 for an entire guest house that sleeps seven, and owners Bob and Jacki Ambrozaitis were very friendly and accommodating.

In all it was a great trip, and an amazing and difficult race that really pushed our limits. We are all looking forward to the first Benson Bear race for 2014! 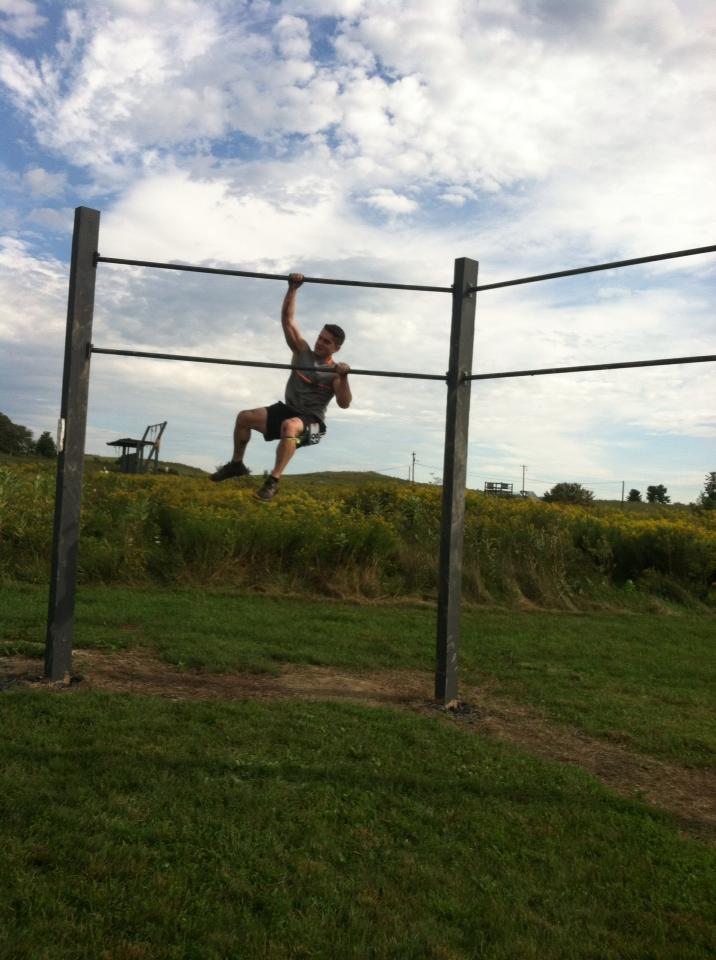