Who is up for a Racecation?  The Bermuda Triple Challenge is 3 days of OCR spread across the beautiful Island of Bermuda.  You get to experience the real flavor of Bermuda while racing though the original capital of the island, across one of its most beautiful beaches, and around the updated dockyard.  All as part of a charity event for a variety of Bermuda programs.

The Challenge is made up of 3 different races run over three days including an OCR Worlds qualifier.  Each race has its own feel with very almost no obstacle repeat.  There were a lot of familiar obstacles like wall climbs, barb wire crawls, and under/overs but also some unique obstacles I hadn’t seen before. 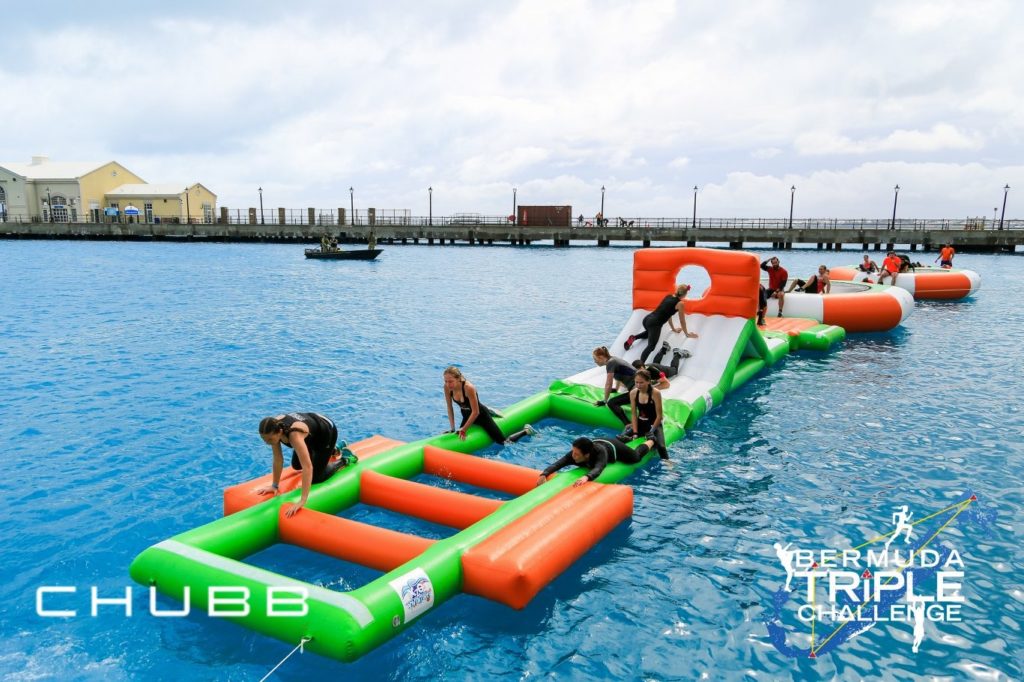 Here is some general info before I break down the races.  Starting with Swag, all competitors got a pretty nice tech shirt.  They made an effort to ensure that all overseas entrants were ensured a shirt by emailing a few days in advanced and asking your size.  Completing each race earned you a medal piece that all fit together into a nice medal.  There was also sponsor swag handed out at the first two races and food at the last two. 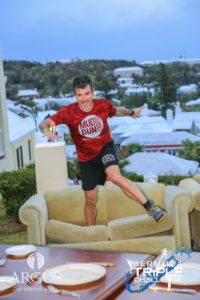 You could enter as an individual or as part of a team.  There were different rules for each as there was a winner for each type of competition.  Individuals ran alone, had a timing chip, and had to complete obstacles or pay a penalty.  For an individual to remain in contention for the podium, they had to complete all three races including 2 laps on Saturday.

Teams ran together and could share obstacle work i.e. one person had to do the weighted carry and they could switch off.  Also, only one person on a team wore a chip and the team had to cross the finish line together.  Teams also had a fund raising component and earned points for the championship based on how much money they raised ($1 = 1 point)

The official hotel for the race is the Fairmount Southampton where they had a special rate for athletes.  This is a beautiful high end hotel located centrally on the island about 2 miles from Saturday’s race.  It was also really close to the Thursday night welcome party ($60 ea) for racers.  A free shuttle bus to all the races is provided from the Fairmount but you are on your own to get back.  I didn’t stay here choosing another hotel that my wife and I liked.  We used the very easy to use Bus/Ferry system to get to the races on Friday and Sunday and took a cab on Saturday.  Speaking to some others, many people had really good luck with AirBnB to save some money. 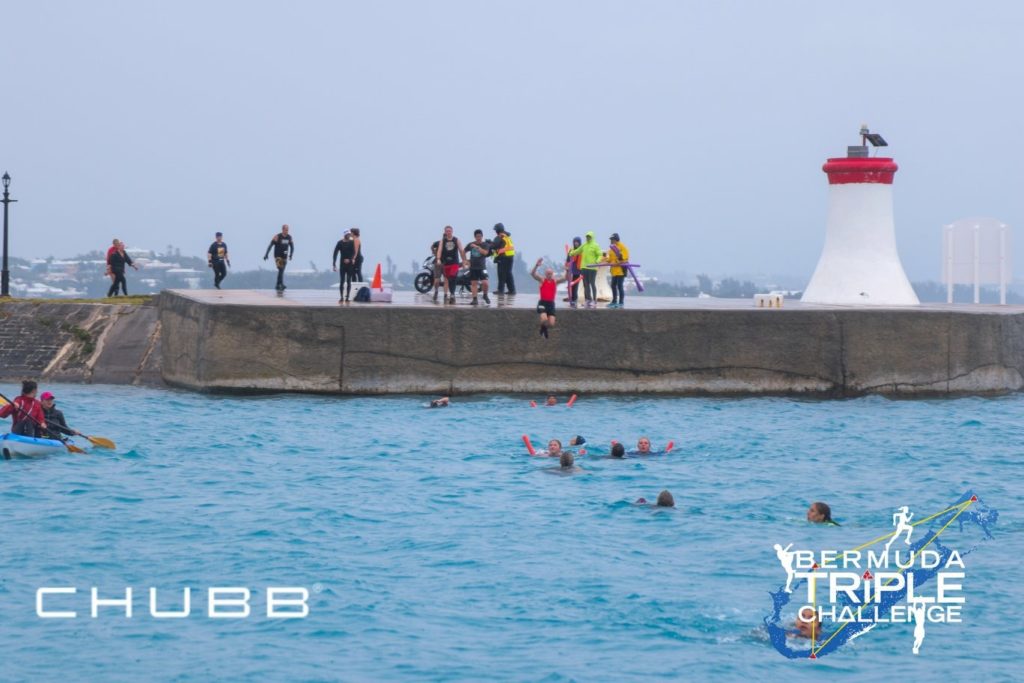 In addition to the Welcome Party, there was an Island tour on Friday and a Sunset Boat Cruise on Sunday available for racers for an extra fee.

This is a 3k race through St. George held on Friday night (started about 7:30) so it was dark by the time you finished.  St. George is one of the oldest parts of Bermuda so you ran through windy narrow streets surrounded by old architecture.  It was really nice. 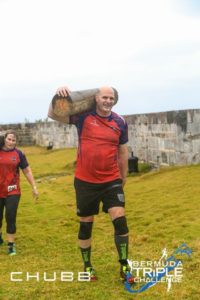 There were a lot of familiar obstacles on the race including a version of the Destroyer (Larry Cooper and his wife were there running) but there were also a fair amount of CrossFit style stations.   Over the course of the race we had to do a tire drag, tire flips, superman burpees, and a long downhill bear crawl.  There was also a bouncy castle to climb through and a cargo net thrown over a bus.  In total there were about 20 obstacles over the short course.

This race was fast and fun as it ran up and down the main street full of bar.  So there were a lot of spectators cheering you on.  After the race, there was DJ in the square and all the bars stayed open.

This race was Saturday morning and began at Warwick Camp home to the Bermuda Regiment and across the street from Bermuda’s best beaches (Horseshoe Bay).  The course was advertised as a 5k loop but it’s probably a little longer.  Teams ran one lap.  For Individuals, You earned your medal piece after one lap but to run for the podium or to try and qualify for the OCRWC, you had to run 2 laps.  For reference I was told that most people only did one lap. 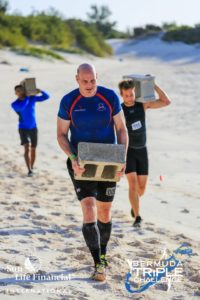 The terrain played a large part in this race. You spent a lot of time running and doing obstacles in soft sand.  The obstacles were pretty familiar with a couple of standouts.  There were 3 weighted carries, one was along the beach, one went down the beach and up the bluff and back down, and the third went up the steepest part of the bluff to the top and you got to drop the weight there and run back down.  All the carries were long.  The big standouts were running into the surf up to your waist and “running” parallel to the shore for a couple hundred yards, a really long and fast slip and slide, and after you leave the beach to head back to the camp, you take detour to run through the Bermuda Regiment’s permanent Challenge course.  This was really fun and included a 40ft slat wall climb, some crawls, balance beams, and a rope swing.  After that you ran to the finish line.

After the race, there was a BBQ on the parade grounds and racers got their first burger free.  There was also Ice Cream Available. 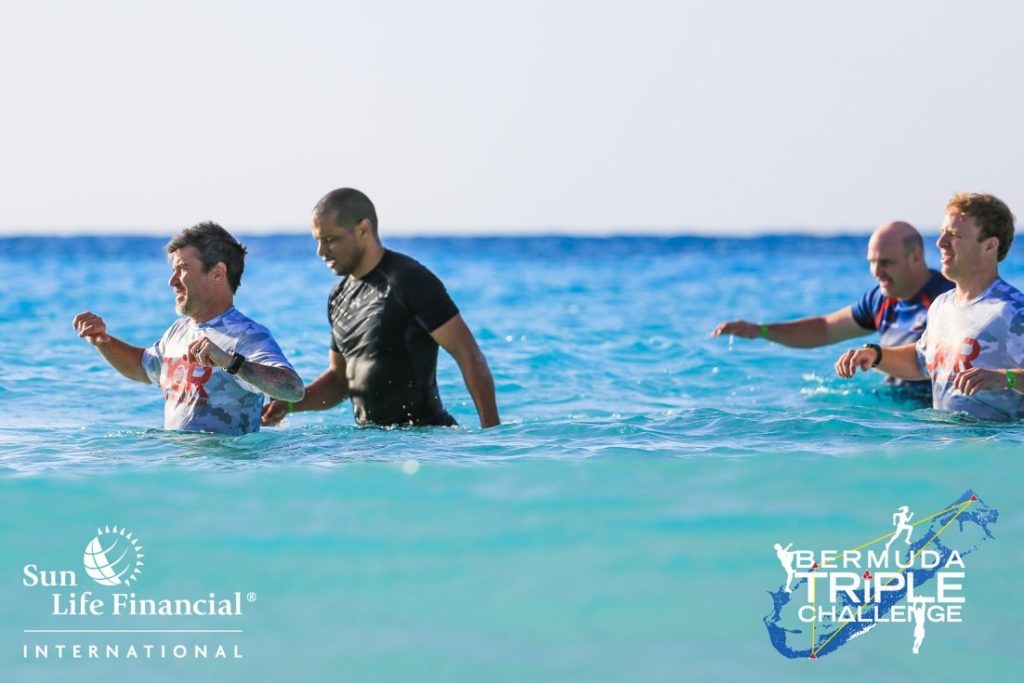 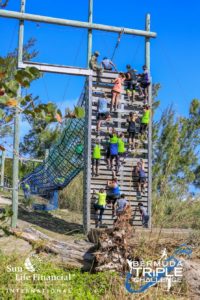 This was a 5k race though the Royal Naval Dockyard.  The dockyard has been redeveloped to be a Cruise port so there are shops and restaurants but there is an old fort and prison that you get to know pretty well.

This race included swimming and they were very clear that if you weren’t a good swimmer don’t get in the water.  The did offer pool noodles to swim with if you wished but there were opt out penalties for all the swims, 15-30 burpees and some extra running.

2)      A rope swing off a pier then swim to a ladder.  If you swung well, you entered the water near the ladder.

3)      A rope traverse between two piers.  Until last year, no one had ever made it the whole way so you went as far as you could and swam the rest of the way.

4)      A jump into the water with a swim to a bunch of inflatable obstacles.  I was told this was supposed to be a zip line but the cargo container used as the start point was put in the wrong place.  I was promised it would be a zip line next year.

Other obstacle highlights include a putting challenge (make the putt or do burpees), a pop quiz (get the right answer to a multiplication question or do burpees), and a spear throw.  The spear throw was different than Spartan.  You had to land the spear in a circle sticking in the ground.  Sounds easy but with the wind it was a challenge.

The course itself was a lot of fun.  Besides running along the piers, you run around the old prison and climbed to the roof.  There was long log carry around the entire top of one of the fortifications by all the cannons, the view was amazing.

After finishing the race in the Victualing Yard of the fort, they had a really great buffet for all the races including eggs and bacon, fruit, and roast beef.  The Yard became a big BBQ and party as tons of racers and spectators gathered to watch people finish.

Overall this event was awesome. The four guys in charge were friendly and checked in with us before during and after the races to make sure we were having fun or to see if we had any problems.  Bermudians are known to be friendly anyway but the race volunteers including members of the Regiment were awesome.  Everyone one of them from the young kids to the base commander were cheering us on and offering words of encouragement. 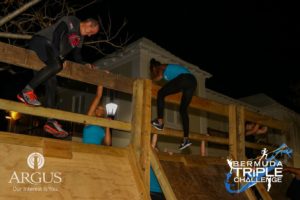 Prizes were given to both individuals and teams (although team winners were announced later due to the fund raising component).  For Individuals, awards were given to the top 3 Masters (40 and over) Men and Women, and top 3 overall Men and Women.  Prizes were Bermudian Rum and Cash.  There was some strong competition among the winners and a strong representation on the podium (and overall) from the Spartan 4-0 team.  While it was fun hanging out with them on the tour and after races, I’m hoping to see more Spahtens next year because it’s more fun with family. Plus I think some of you could hang with the podium crowd especially some of our awesome women.  If it helps convince you, the woman who came in 3rd overall claims to have never run OCR before this, she was a road racer and her husband convinced her to run.

We had the best time running these races.  The different feel for each race, the challenge of the terrain, and the varied obstacle made this a great event.  The flight home was full of racers and we were all talking about making reservations for next year.  I would highly recommend that you add this to your racing bucket list.