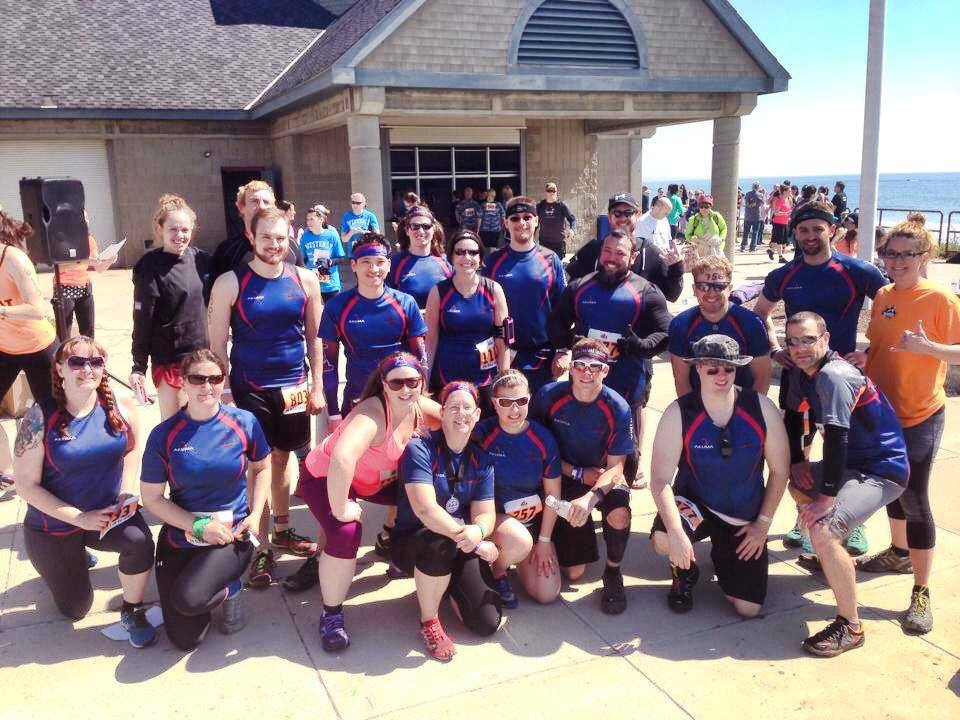 Bold r Dash returns to the beach in 2014 – this year part of the New England Spahtens Race Local Series. This year located at the fantastic Scarborough Beach in Narragansett, Rhode Island. If you ever wanted a taste as to why Rhode Island is an awesome place to live, just spend a beautiful Saturday morning here.

Here is an overall review and some positives and negatives which i will get into more in depth below:

Scarborough is a State Beach – which made for ample space, free parking and being right at the venue. This was a step up to the more difficult and spread out parking at last years Beach race in Misquamicut.  Registration and check in went smoothly for those that did not hit up REI during the week to pick up their packet. Runners each were given a timing chip, bib and colored bracelet which designated the heat they were assigned too.  There was some disorganization when it came to starting off the first wave of the day, runners had to be checked for their color band before getting into the chute. Bold r Dash was strictly enforcing their No Wave jumping policy. Unfortunately that’s about when they stopped enforcing it. We also had to exit the chute to get a rock and get back in. We had to stall a bit before the start so a volunteer could run a cone out for us to run too and back before hitting the beach.

The Race started with the staple of Bold r Dash which is doing the first sprint of the wave with a softball or slightly larger rock in hand, about 200 meters out and back to drop the rock off at the start and then onto a trail and out onto the beach. We had a good half mile run up the beach before we hit the sack hop (personally hate this obstacle) and then onto the the bucket run. You had to grab a bucket, run it down to the water and back up the beach to dump it in a large bucket 3 times. For the Elite wave they immediately ran out of buckets. I assume the thinking is the run up the beach would thin out the wave enough to not cause a bottleneck, however the elite wave ran out of buckets right away and caused a lot of waiting if you were not one of the first 25 there.  This clearly could have been avoided.

After the buckets you continued up the beach into the technical rocky terrain. This is where your first and second place finishers of the wave went astray (accidental or not, misdirection by volunteers we have not confirmed).  This again comes down to course markings and Volunteer direction. The technical rock terrain was pretty awesome… however their needed to be more course markings here and several runners started to 2nd guess if they had missed a turn and caused some confusion for us in the 9am. After scaling up the side of a huge rock slab we were turned around and headed back up the beach where we started to hit the larger walls and A-frame scaling obstacles. There was a little concern here for me as we scaled the A frame with chain steps as i watched a chain break from is support and a guy fell strait through the obstacle ( He appeared to be ok ) But i didn’t have the warm and fuzziness knowing we were the first ones to use the obstacle and it was already breaking.

Back up running over some tires, tire hopes and chain supported balance beams (which made them wobble intentionally ) we were up onto the Beach paved walkways which caused again some more confusion for runners, as spectators were scattered all over the course here. There was no markings preventing Spectators and runners from getting all mixed up with each other here.  Again, another area easily avoided.  However after this section was on to one of Bold r Dashes best beach obstacles. The Buoy walls. It always feels like there is a 1000 walls to go over and under and is my personal favorite at this race.

Further up the beach we cut back into the large open fields for some more of Bold r’s bigger a-frame obstacles Tire walls, A-frame ladder walls etc. the Course was marked with buckets, However you did have to think twice about where you were going… they did correct this later in the day with more volunteers in the area to direct runners. Again this could have been easily corrected with some caution tape or something to that effect. There were some big, fun obstacles here for the first waves of the day. As the day went on however these obstacles turned into huge bottleneck for runners.

Runners were told they would not be allowed to run multiple waves without paying $15 and picking up another bib and chip – no exceptions and would be strictly enforced to prevent bottlenecks, overloaded waves and safety to ensure all runners on the course were accounted for. Unfortunately this did not not prevent huge back ups. I can also speak personally that I watched 4-5 waves go after I had finished from the 10am wave on… and “strictly enforced” was no longer the case as there were no longer volunteers checking bracelets and it was very easy for a runner to hop into another wave or any wave they wanted after the 9am.

Also T-shirts had to be purchased if you registered past a certain date. an additional $5 if you were a late register. So you paid more and got less if you were a couple week register.

Overall is was a great location with many issues that could have been avoided. Bold r Dash did make adjustments throughout the day with volunteer placement – some sections became so overloaded with spectators by 11am several runners were lost in the mix – at one point while taking pictures i had to start directing runners in the confusion.

1 thought on “Featured Review: Bold R Dash on the Beach”