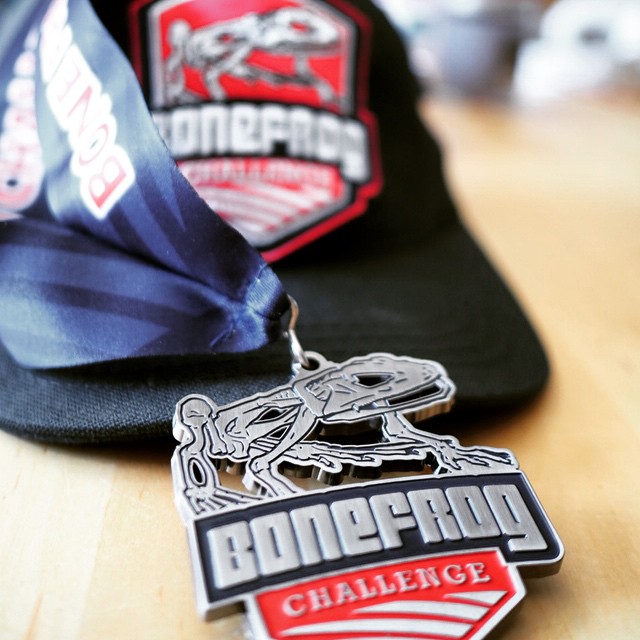 Bone Frog Challenge bills itself as an event you’ll never forget, with a minimum of 40 Seal style’d obstacles. They even warn you, right on the front page, that you must be functionally fit to succeed, and you will get beat up – but, you will finish.

They aren’t lying. Bone Frog Challenge is not your fun 5k foam electric glow fest of an OCR. This will push you, and will challenge even the most veteran OCR enthusiast or participant. You earn your medal here.

I’m lucky in that this was relatively local for me. About an hour from my house, the drive is an easy shoot down Route 2, enjoying the beautiful central MA scenery on the way. This also meant I could be there early, park close by, and figure out the team tent situation before too many others got into town.

Berkshire East Ski Resort was hosting Bone Frog Challenge for the third year in a row, and it’s a fantastic venue for an event of this caliber. I happen to know that other events have been asking after this venue, but they’re close to the Bone Frog crew, and we’ll likely get to enjoy many more Bone Frog’s here in the future. The venue had plenty of parking (and a satellite lot with shuttle buses for people who were late arrivals). The $10 parking fee was pretty standard, and assuming you were in the main lot, got you a parking spot an easy walking distance from the festival.

Facilities were relatively good. Onsite waivers were plentiful and easy to fill out – I would have liked to skip this step and fill it out at home, but when I arrived, this was painless, as was the registration process. Bag check was also pretty straight forward, and they had a large indoor seating and eating area, with a restaurant to one side. They had a fail with the indoor bathrooms early in the day, and they were pretty gross later on – and three porta potties didn’t provide an adequate backup – but there was an ample supply of bushes to duck behind 🙂 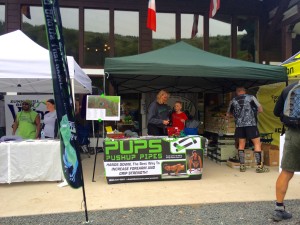 They had a nice selection of vendors – our friends from Shale Hill, Viking Challenge and Icebug were present, along with “the crazy pants people” who’s company name I didn’t catch. Bone Frog also had a very nice selection of gear for sale, from cheap stickers and patches to high end hoodies and flags. Beer was a local brew, and four varieties (one free with your finish) – I wasn’t a fan of the super sweet raspberry option though! They had food offered by the venue, and I think a hot dog truck out in the parking lot. I had the best pulled pork sandwich ever once I was done! Prices were event pricing, but not crazy.

None of that tells you about Bone Frog though – and why it was such a challenge.

Bone Frog isn’t a beginner race – and they grow organically, by word of mouth and reputation. From 250 participants in the first year, to over 2,000 this year. The people who come here are coming to be pushed, to be challenged and to leave it on the mountain – don’t underestimate the challenge.

Every single obstacle is significant. There’s no throw away, easy speed bump style obstacles. Big walls, climbs, crawls and carries – they have a fantastic blend of of them, and they’re close together. While there were some single track trail area’s to let the runners open up, this wasn’t a large portion of the course, and didn’t feel superfluous.

Every obstacle was also well built – I saw no obstacle failures, no tarps ripped up, no wood coming to pieces – some of the taller obstacles had some give to them, but nothing to concern me. 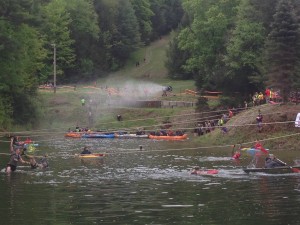 There were problems – given that this event had over double the number of participants of last year, there were a couple of choke points that caused backlogs – frustrating backlogs too. The signature lake obstacle of climbing over rafts got backed up early and quickly, and some of the taller cargo net climbs were significantly backed up as I came through. This can break a course, but with the long and challenging nature of Bone Frog, they were able to recover, and while it was a frustrating experience, it didn’t break the event, and we still had a great time.

There were 6 water stops on course – the early ones unmanned and looking pretty short on supplies and messy when I got to them, the later ones being manned and much smoother. My understanding is this was a problem last year also – so I brought my own pack, and was happy for it when the day turned out to be considerably warmer than expected! 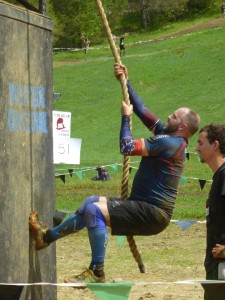 Volunteers are another place a race can find themselves failing fast, but not here. All the volunteers were encouraging and supportive. Many were retired Seals, and they added a significant amount of legitimacy to the Seal theme.

In fact, many obstacles were dedicated to fallen Seals – with their names attached, and many obstacles themed after Seal events or history. A very well executed theme throughout.

I’m not going to even try and detail every obstacle – there’s too many, and they will change year on year – but some highlights for me included the huge blacked out cavern, with three walls you had to go through holes of differing heights – this was a hot, sweaty, blind mess and a ton of fun. Totally unique! The “death march” hill was rivaling Killington in steepness, even if it didn’t go as long (and to the people I told “there’s a dunks at the top!”, I apologize. 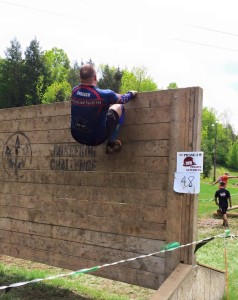 obstacle flow coming – along with a few crawls and some carries – while the carries were never as heavy as some other series are getting, they were still on some tough terrain. I would recommend replacing the sandbags for something more sturdy (Wreck Bags, for example), as they were splitting – as sandbags do.

One of the most unique, and signature obstacles – and one that hit a lot of people right in the feels – was the mandatory Seal memorial obstacle – 31 fallen Seals are listed on a large banner, and 35lb Wreck Bags – you were required to pick a bag up, strict press it overhead as you read a name, then drop and burpee. Repeat until you had listed everyone. This was a space where no one minded waiting for the bags to be open – and a reminder of how lucky we are to be there, and able to do this stuff. Coupled with a quick quiz from some military folks at the solar farm, one I failed, the other I passed – we were definitely at a military, and Seal themed event, without it ever being over the top. 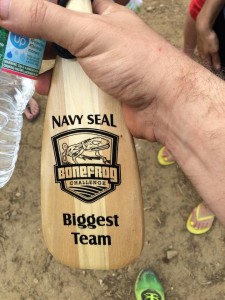 On a personal level, I was thrilled with how I was able to make up time and push on the trails – catching up to earlier waves – it was overshadows a bit, as I’d let the backups get to me, and done my penalties at a couple of spots (the water obstacles and the large cargo net at the top) – i’d also failed every single grip obstacle, my weight and lack of grip strength working against me on the monkey bars and similar obstacles. An ungraceful dismount on the triple gut check right at the finish took the wind out of me towards the finish too – but it is what it is, and I’ve only got to improve next year. 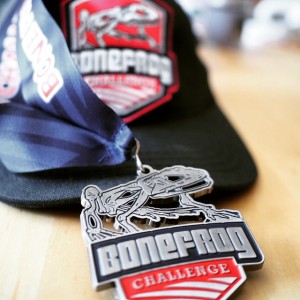 Because I’ll be back – Bone Frog have, I hope, a great path ahead of them. They do what they do VERY well – by focusing on putting on challenging course, with lots of good obstacles – there’s no gimmicks here – you get a well done, well organized and challenging course that will only improve as they grow and learn. This was a race I *REALLY* wanted to see in the #racelocal series this year, and I’m very happy we have them in New England.