This year, for the first time, Massachusetts native company, Bonefrog, took their obstacle race to Carter & Stevens Farm for the September Bonefrog Boston event. My last Bonefrog was at their home venue, Berkshire East in Charlemont, MA. However, I had taken a year off from Bonefrog, a mix of circumstances based on my schedule and personal course design preferences. When I saw that Bonefrog was coming to Barre I was pleased. I like racing at Carter & Stevens. Some folks state that it’s a bit of a ubiquitous venue at this point and has the minuses of being a working farm; however, I am never disappointed when I can tackle a course that involved more running than mountain climbing. Carter & Stevens fits the bill — it’s flat and fast.

Bonefrog offers many different ways of tackling their course. There is the Sprint (3 miles), the Challenge (6 miles), Tier 1 (the 6 mile course followed by the 3 mile course), and the Endurance option (the 6 mile course followed by as many laps of the 3 mile course as you can do before the time cut-off). The Challenge is more or less the “default” option and was what I signed up for. It would allow me to do the full course without pushing too hard, a good idea considering that I’m running a marathon at the end of the month.

I arrived in Barre in advance of my 9:00 a.m. wave start. Parking was offsite with folks getting bused in. I opted to park in non-official parking, walking distance to the venue. I know it’s hypocritical, but I don’t want to encourage what I did because races rely on parking funds. But the bus trip from the parking lot in Barre to the venue has always made me really motion sick, so I did what I did. Parking was $10 (both for the official parking and the non-official parking I selected). Reviews I heard of the official parking were mixed but overall fine. It seemed buses were running reliably. This is a long-established venue, and, as far as I can tell, parking is usually handled sufficiently.

When I arrived at the festival area things were a bit chaotic. I made it through registration in a snap, but the lines for bag check and the bathrooms were significant. There were only a few hundred people running Bonefrog (225 for the Challenge with me). With such a limited field, one would hope lines wouldn’t be an issue, but they were. I was pleased to see that during my wait in the bag check line, Bonefrog staff began to come down the queue to give people bag tags so we could pre-organize and just have to pay at the front. This speed things up a bit. From there, I moved to the bathroom line, where I waited another 10 minutes. Eight restrooms for 225 racers didn’t seem like quite enough. The entire festival area was somewhat minimal with limited vendors — basically just Stone Cow, which is Carter & Stevens owned, providing beer and not much else. The feel was super different than Savage Race, the last event I attended in Barre. Savage felt lively and hopping; Bonefrog seemed a little dead. I will give Bonefrog huge props though for not having annoyingly loud music. Thank you!

My 9:00 a.m. wave was the first general open wave of the day, after the elite waves and Tier 1 and Endurance waves. I went right from the restroom line to the starting line. I was super pleased by a few things: (1) no loud music, (2) no MC!!!, and (3) we started on time. There was zero fanfare, but that’s the way I like it. I hung out with fellow NE Spahten (and best Ragnar Captain ever!), Jess, and we were on our way before we knew it.

The Challenge course measured in at just under six miles with 31 obstacles. The course made up for some of less-than-ideal logistics pre-race. The obstacle placement was good — things were fairly evenly placed and there didn’t seem to be too much unnecessary running for running sake to pad the miles. It’s rare I can say that. Bonefrog made good use of Carter & Stevens. Regulars know what to expect there, but Bonefrog did a nice job of taking us on some routes less traveled, I think. (Though I should note I haven’t done a Spartan in Barre, so perhaps others found the paths more familiar.) Bonefrog has had some issues with course markings in the past — I got pretty lost during the fall 2016 event in Charlemont. The Barre course marking were not perfect either, and a group of us got slightly off course at one point. We zigged where we should have zagged but, fortunately, ended up in the same place — the error was slight and made no difference. As I mentioned before, the course was flat, and, with the exception of a few really muddy spots, I was able to run the entire way. There was some single track that got a little congested, but this was mitigated by the small number of participants. I love a flat and fast course, and appreciate that I can experience this in Barre. I also appreciated that we didn’t have to go through water on the course. I am more into obstacle racing than doing a mud run and with temperatures in the low 60s, I did not want to submerge myself into water. 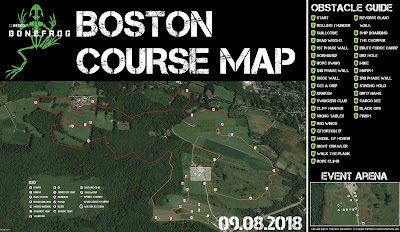 Bonefrog has some solid obstacles. They are interesting, fun, and challenging. The mix is good, though a bit heavy on the rigs, so if those aren’t your jam, take note. I enjoy rigs, so I tend to be a happy camper at Bonefrog. Fortunately, the open waves are penalty free, so you have the option of giving everything a solid attempt and moving on if it isn’t working out. Interestingly, some of the obstacles on course Saturday were beginning to show their age a bit, which was worrisome at first, until I noticed the care put into doing reinforcements — everything felt sturdy, so I was not concerned about safety.

The main minus of the course was back-ups. With such a small field, this shouldn’t have been an issue, but it was. The first obstacle, Rolling Thunder, had a back-up right away, and I pretty much had to wait a least a minute at a third to half of the obstacles. (Some waits were much more than that, some less.) That’s a bummer and had always been an issue for Bonefrog, perhaps because of the challenging nature of some of their obstacles. 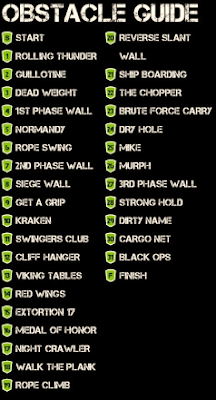 Here’s a bit more detail about the obstacles at the Barre event.

I finished the Bonefrog Challenge in 1:39, good enough for third place in my age group, making this race a North American OCR Championships qualifier for me, which is pretty exciting. My overall impression of the event was that it was solid — overall a middle of the pack experience. It was not overly outstanding, but it was decently good. Some of the logistics could use tightening up. I enjoyed the course while wishing some adjustments could be made for fewer back-ups. Bonefrog is a “sometimes race” for me. If it works well with my calendar that’s great; if not that’s okay too. Bonefrog, I am sure we will meet again at some point. I look forward to it.