Bonefrog Challenge is a smaller race series hosting events in the Eastern United States. This past weekend they held their New England event in their home venue of Berkshire East Mountain Resort in Charlemont, MA. With four race length events going on at the same time, there is something available for athletes of all levels. The Sprint course was about 4 miles, with about 22 obstacles; the Challenge was approximately 7 miles with 36 obstacles; Tier-1 is the Challenge course followed by the Sprint course; and finally for those gluttons for punishment the Endurance was Tier-1 followed by as many Sprint laps as possible in the time allotted. Being owned and operated by Navy SEALS, and run at a ski resort, the combination of military inspired obstacles and rugged terrain with significant elevation pushed many course runners to their limits.  As a smaller race series, and part of the #RaceLocal Grand Prix, it is clear that the race organizers had listened to criticism from past events and implemented changes in an attempt to improve the overall experience, which for the most part worked, although there are some things still to be ironed out. 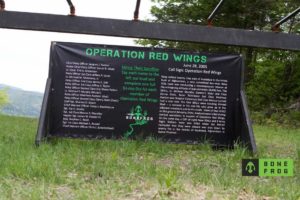 Upon race registration, the confirmation email included the selected wave time. The morning before the race, another email went out with a reminder of the overall preparation for race day. There was a scheduled early packet pick up as well as spaghetti dinner on Friday night, but due to the remote location, I’m not sure how well attended it was.  In the reminder email, it was recommended that we should arrive at least one hour and fifteen minutes before the starting wave time, and as it turns out it was definitely needed.

Parking for the event was on site for $10, and was within ¼ mile of the registration tents. Traffic flow entering the venue was smooth and guided well by volunteers. Upon arrival, there were tents outside for packet pick up. Due to the limited area and volunteers available, and the popularity of the race, the line quickly extended for packet pick up. For most people, filling out the waiver online beforehand helped the process a bit, but the check-in process could still be streamlined more. Next to packet pickup was the bag check area which was available for $5 per bag, but due to the close onsite parking, many people chose to forgo it. 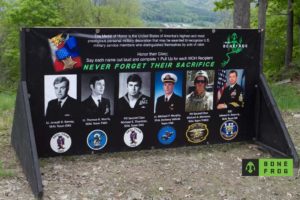 With inclement weather coming in, the two-floor lodge was open for racers and their families to use to stay warm and dry, as well as to mingle before and after the race. Music was pumping out via PA system to get the racers and spectators alike pumped up. With the festival area and lodge at the base of the mountain, several obstacles were visible, including their signature obstacle, Black Ops: a rope wall climb up to a platform to inclined monkey bars in front of a giant American flag. Food was available for sale from the outdoor grill, including hamburgers, sausages and hotdogs. 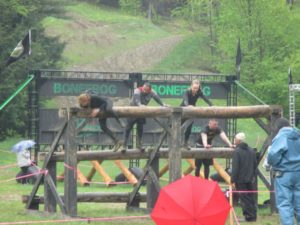 Each portion of the course provided a sufficient challenge for athletes of all types. Being on a ski resort, there was plenty of elevation gain, with technical trails through the woods, smooth grassy slopes, and some flat areas to really open it up. Strength based obstacles included heavy carries such as the Ammo Can (Challenge only) and the Brute Force sandbag carry, as well as a hoist obstacle called Dead Weight. Plenty of agility and grip strength obstacles were on the course as well, including some classics like “Get a Grip”, “Swinger’s Club”, and their signature final obstacle, “Black Ops”. 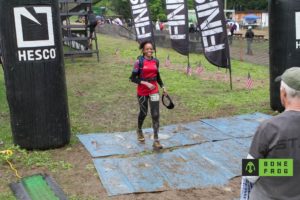 As a smaller race series, they seem to have more flexibility in innovating obstacles, and several newer ones were on the course. These included: Guillotine, an inclined log that one needed to balance on climbing up to a wall with a relatively narrow opening at the top, then back down an inclined balance log; Strong Hold (which was named Sway Bars at its debut in the 2017 event), a two sets of U-shaped monkey bars, with a ring transition in between and a mock grenade instead of a bell to complete the obstacle; and Ship Boarding, a set very narrow cable ladders that had to be climbed in order to reach a bell. With the addition of new obstacles, it often means that older favorites end up getting removed, sometimes for the benefit. The “Slide for Life” was removed, and while it is a difficult and fun one, it was notorious for causing bottlenecks so probably for the best that it was shelved. The “Drunken Monkey” was another that was not used on this course, but may be considered redundant because of the similar obstacles with “Strong Hold” and “Black Ops” filling the niche of monkey-bar type obstacles. Also along the lines of innovation, sometimes a new obstacle or feature does not work, and they were quick to adjust for it; for example, the Grenade Toss that was new last year became a logistics nightmare and lead to many backups, so it did not return for this event. 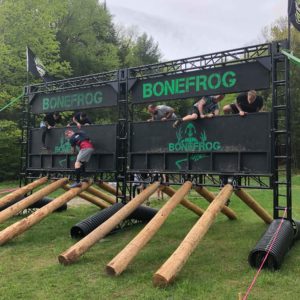 Another unique aspect of Bonefrog is that being a Navy SEAL owned and operated race, most of obstacles are military training inspired, and several pay homage to service members lost in the line of duty. “Mike” and “Murph” were simulated ship boarding obstacles named after Navy SEAL Medal of Honor recipients Michael A. Monsoor and Michael P. Murphy, respectively, who will have commissioned Navy guided missile destroyers carrying their namesakes. A set of three obstacles were set up to pay respects to lives lost in military operations, with one rep of an exercise done for each life lost in their respective operation: 20 reps of parallel bar dips for Red Wings (this operation was portrayed in the recent movie “Lone Survivor” starring Mark Wahlberg); 31 burpees for Extortion 17, for those lives lost when their helicopter was shot down in Afghanistan, the worst loss of US military lives in a single incident in the whole campaign (formerly the “31 Heroes obstacle from previous events); and 8 pull ups for Medal of Honor recipients. The unfortunate thing about this obstacle is that it was on the Challenge course only, so Sprint racers did not experience this; from a logistics standpoint though this would have caused significant backups if all racers went through them. 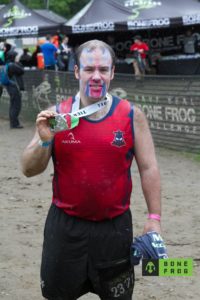 It seems that based on much of the negative feedback they had received from last year’s event, many things had changed in an attempt to correct issues. Course markings were much better than previous events, and there was less “bush whacking” through un-groomed trails, making it easier to follow the course correctly. The course was limited to one water crossing, and this was a welcome change as being on a mountain course, and with the late arrival of spring this year, the water was extremely cold. Lifeguards were stationed on each bank, and there was a diver in the water in a dry suit to ensure safety. As cold as the water was, many people struggled to catch their breath, leading to the divers and lifeguards assisting swimmers out of the water.

Penalties for failed obstacles were removed for non-elite racers (still mandatory completion for the elites) in an effort to reduce bottlenecks at obstacles. While this helped, there were still a number of backups at some of the obstacles, particularly later in the day as the Sprint and Tier-1 racers were on the course at the same time.

There were sections of climbing that were cut out, which also meant that one of the obstacles that had really been a challenge for many people but I thought was one of the highlights, Solar Walls, was not used.  Another big complaint from last year was that the trusses used for the rig type obstacles were too high for many racers; this year, different trusses to make the rigs more in reach, and boxes were placed to make it easier for shorter athletes to reach. 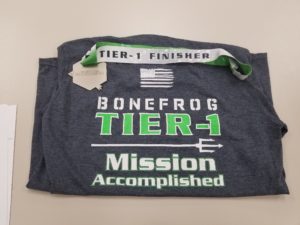 One of the disappointing things was that after the race, the free post-race refreshment was limited to water; even a banana after finishing would have been very welcome.

A big change for the race was that the shirts are now distinct for the different event that was completed (Sprint, Challenge, Tier-1, and Endurance); they are a soft poly-cotton blend that is very comfortable, but seem to run a bit small (I went up a size from medium to large anticipating a small amount of shrinking due to the cotton). The medals were redesigned instead of being a repeat from previous years’ medals (another common complaint). The Endurance medal, unlike last year’s debut event, is now larger than the Tier-1 medal.

For a post-race meal, the outdoor grill was open serving up hamburgers, cheeseburgers, sausages and hotdogs (veggie burgers for a meat-free option), with chips and a beverage for around $10.

Overall, this race was a very challenging event, due to the terrain and the numerous obstacles which tested many aspects of physical and mental fitness. The tribute to the fallen service members was a very important touch to the flavor of the event. While this year’s event did improve on a number of issues from previous years, there are a few minor changes that can still be made to improve the overall experience.