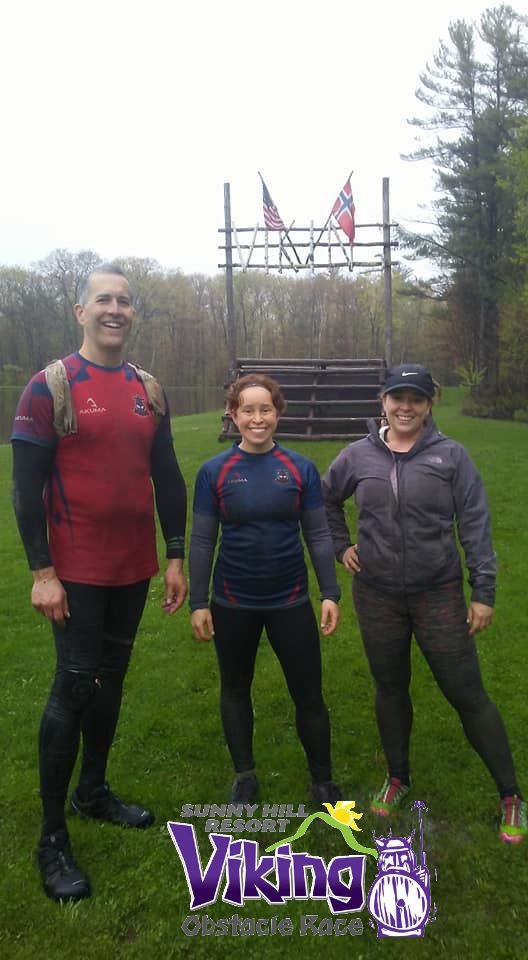 I’m a fan of Viking Obstacle Course, a fixed course of around six miles at Sunny Hill golf resort in Greenville, New York. I try to make it there every year for at least one of their several races. 2018 ended up being busy and the races just didn’t fit into my schedule. As a result, I was determined to make it to Viking in 2019. Enter their May 5 race, Cinco de Mjolnir Ultra Viking.

It actually turned out that the May 5 race wasn’t ideal for my schedule either — the date was the Sunday before Ragnar Cape Cod, where I’ll be running around 26 miles that Friday and Saturday. As a result, while I was signed up for the eight hour “ultra” race, I decided it made sense to do one fun lap to see how my obstacle fitness has overwintered and otherwise keep this an easy effort. There was an option for a charity 10K the same day as the Ultra Viking, but that race was at around 11:30 a.m., and the ultra started at 8:30 a.m., which would leave more time free in the afternoon for R&R.

My house is about two hours from Greenville, NY, so I got up early and made my way to the race the day-of. There are plenty of places to stay on-site for those who want them, so if you’re traveling from father away, keep that in mind. The race tends to have an intimate field of less than a hundred runners, so check-in in the club house on-site was a breeze. I was able to park my car footsteps from check-in and a very quick walk to the start line.

The day of Viking dawned wet and cool. We’ve had rain non-stop in New England for pretty much all of April and the start of May but the 50 degree temperatures have been on the colder side for this time of year, I think. Regardless, I layered up with long pants and a long sleeved t-shirt. The Viking course is wet in the best of times with muddy sections as well as a pond and a river that are all integrated into the course. I was hoping that race director, Asa, would have some pity and not send us through every water element on the course.

At about 15 minutes before our 8:30 a.m. race start, I headed out of the club house, where I’d been avoiding the weather, to the start line. I stashed my gear in the covered picnic area and checked in with some fellow Spahtens. It was a small but awesome group.

We braved the rain to line up and listen to pre-race announcements at the start from Asa. He explained the penalty system for the race. There were five obstacles that you got a penalty for not completing, which were to be completed at the end of your lap — the rope climb, the Dragon’s Tooth monkey bars (which included up and downhill bars), the five-part traverse wall, the Norse Poles (wood blocks hanging from ropes), and Asgard Skywalk (a balance obstacle with rope traverse). At each obstacle you passed, you’d receive a band to prove you’d completed it and, thus, avoid a penalty. All standard walls and carries were mandatory. Odin’s Tables, where racers climbed up a ramp and then climbed down the rope hanging off the other side, had an on-course penalty if you didn’t complete the obstacle.

At 8:40 a.m. we headed off to begin the race! I was planning just one fun lap but many people were serious about doing as many loops of the approximately six mile course in eight hours as they could. To that I say, “Props!” The weather was wet and the course even wetter. We waded through mud and traversed streams. I was completely submerged up to my shoulders after one river crossing. The weather stayed rainy, which meant that once you were wet — which was immediately — you weren’t getting dry. Plus the course put us through water again and again. The temperatures hovered in the low 50s, but as long as I kept moving I actually felt alright and the cold was less a problem than I thought it would be. Fortunately, the course did not have us doing a swim in the pond and completely submerging.

Viking has a wonderful and diverse set of obstacles, created by Rob Butler of Shale Hill. I have a detailed write-up from Viking with descriptions of all the obstacles on my blog from the past. Since that post, which I recommend reading for more content about the obstacles, the layout for how you tackle the obstacles has changed a bit. Racers now run the old course almost in reverse, though there’s a bit of meandering back and forth to add some miles. Regardless the course is fun, and I love the obstacles there. They are the perfect mix of challenging and achievable. The only obstacle I failed was the Dragon’s Tooth monkey bars, which I find hard always and the wet didn’t help.

Despite the weather, I actually had a blast at Viking. I took it fairly easy on Sunday, keeping a modest pace and focusing on enjoyment over performance. I’ve seen very serious about my athletic pursuits lately and have been training super super hard. In all of that, I have somewhat forgotten that this is play. Taking a step back at Viking and playing instead of beating myself up with lap after lap was a good move for me and great for my mental state. It also gave me the opportunity to bond with teammates, something I haven’t done in a while as I’ve been in a “run my own race” state of mind. I didn’t let the weather get me down and prevent me from having a good day.

Being relaxed definitely helped my performance in some ways too. Though I wasn’t at my fastest, I did well with only one failed obstacle. Winter training for me doesn’t involve a lot of grip work, and I tend to bulk up a little from lifting heavy, so I was glad to have solid results on the obstacles this early in the season. Over the next week or so, I will be switching up my training to work on grip and muscular endurance and should lean down a little going into August and my A-race for OCR, NorAm.

For those who are looking to hit up Viking this season, they have another race coming up on July 27 and have regular training throughout the summer. While I won’t be able to make the July race, I would love to go back to Greenville for training and for a fall race, if they do one for, say, Halloween (hint hint). Fellow, NE Spahtens, I’d love to have some friends to run with, so maybe I’ll see you all there?