Civilian Military Combine launched their 2014 season with a “Mountain Assault” event in the Camelbak mountains of PA this past weekend – and a small, but mighty team of New England Spahtens made the road trip, took on the pit, raced the mountain and came away with our dog tags – CMC put their best foot forward and launched what looks to be a fantastic year.

For those who’ve never come across CMC before – it’s a race of two parts. First, you take on the pit – and receive a points score. Then, you take on the race – and get a second points score. These are totaled and ranked. It’s a unique system that means a fast runner isn’t going to be able to “run away” with the the overall win – as the strength based pit will level the playing field, allowing for the stronger – but maybe slower guys to get a great shot at glory. 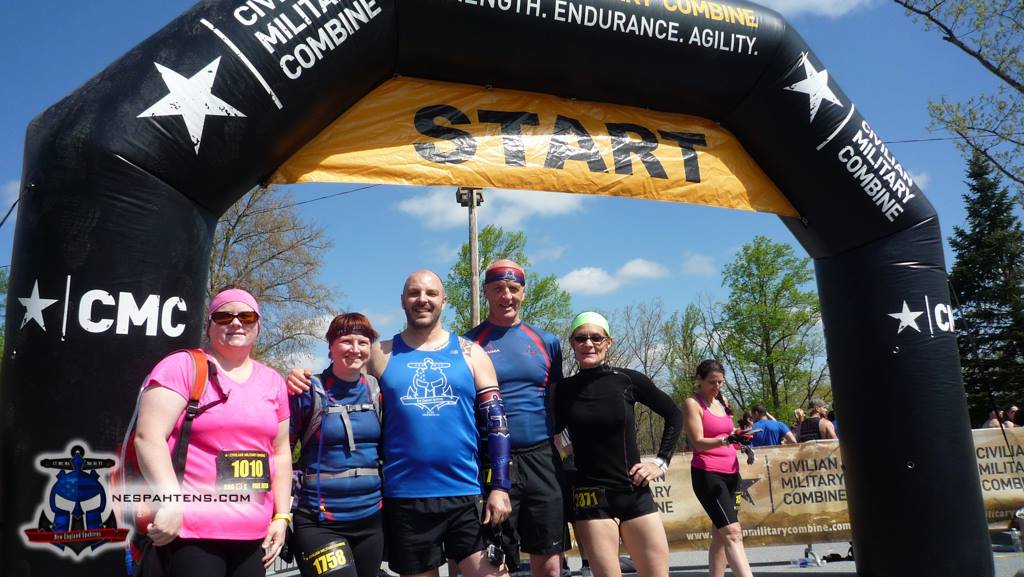 This is CMC’s home. They launched their first event ever here in 2011, and have had an event here ever since. Camelback Mountain Resort is a water park – and had plenty of accommodation for an event like CMC. From free, easy to access parking, to local hotels (we stayed at The Chateau Resort which was barely a minutes drive away), to plenty of open space for great vendors, onsite food, real bathrooms and lockers. CMC always put on a solid festival area – there were vendors of clothing, equipment, food and drink, army, national guard and marine booths – as well as some military charities, local chiropractors and CMCs own merchandise tent.

Of note was Wreck Bag – a New England company who hit the OCR scene only a few months ago – they make heavy sandbag alternatives for training and carrying, and we first saw them (and fell in love with the gear) at FIT Challenge II and BoldrDash – we’ll be seeing them at all CMC events in 2014, and it was fantastic to see that by the time we left in the afternoon his tent was almost cleared out of all the stock he brought with him. 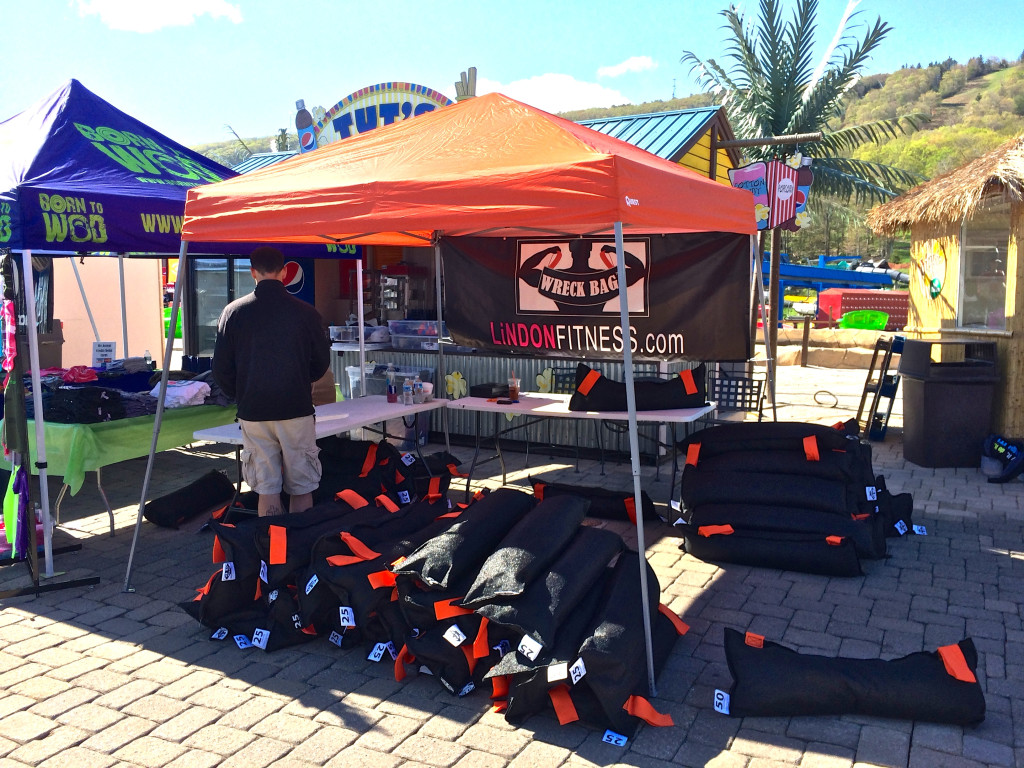 Being a water park, CMC made use of several of the onsite facilities to turn them into obstacles – more on those when we talk about the race. 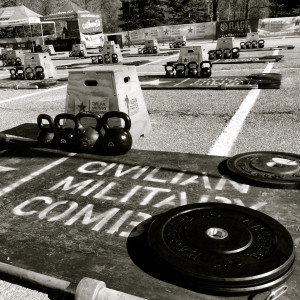 The pit is always evolving – and I think the 2014 pit is the most accessible yet. For 2014, the pit is a 5 minute long AMRAP (As Many Repetitions As Possible) – but you can pick from four different divisions. Beginners and folks who have trouble with heavy weights (due to injuries or simply lack of training) can opt for Alpha, which is 100% body weight movements and easy for anyone to pick up. Those athletes who have weight lifting or crossfit experience can try for the Delta, which throws serious load at you, and looked exhausting. You only ever get ranked against people in your own division, so there’s no benefit to scaling down.

Personally, I went for the Charlie pit – which is closest to the 2013 pit many people will be familiar with from last year. This involved five minutes of the following cycle: 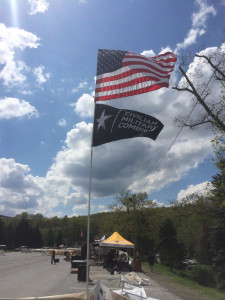 I came away with 76 repetitions, beating my training run by 4. My judge was friendly, loud enough I could hear him count and kept me on track when I forgot how to count to five … hey, it happens! As usual, the pit is a little cramped, but they had made improvements to how people flowed in, and you could see the judges had been trained to clean up their stations after each athlete, so equipment wasn’t scattered all over the place. I felt like I had more room to move than I did last year, and that was welcome.

It’s a common misconception that you need to be a Crossfit athlete to do this. My father – who hasn’t picked up a barbell, seen a kettlebell, set foot in a gym, let alone a Crossfit box in his 61 years came in first for his division (first responders) doing the Alpha pit – which meant sit ups, burpees and box step ups.

Once your five minutes is up and you’ve signed off your score, you file out to the start line for the course – with a water stop. You get a minute or two of rest, then off you go.

I had already been told ahead of time that the course was one of their best. CMC love this venue, and know the mountains well. Being a waterpark, the first thing they do is run you into a wave pool – at the deep end there was a cargo net to climb out, and a ton of lifeguards around the pool side, all holding long floats and watching the action closely – which was reassuring, as my short wife and her equally short battle buddy were struggling with the depth of the waves, and despite me being able to get them to the ladder (which was right next to the cargo net), when I looked at my video later, a lifeguard was right next to us the whole time and was ready, in case we got into trouble, i didn’t notice it much at the time though, and have to tip my hat to CMC, this was a fun/scary way to start the race 🙂 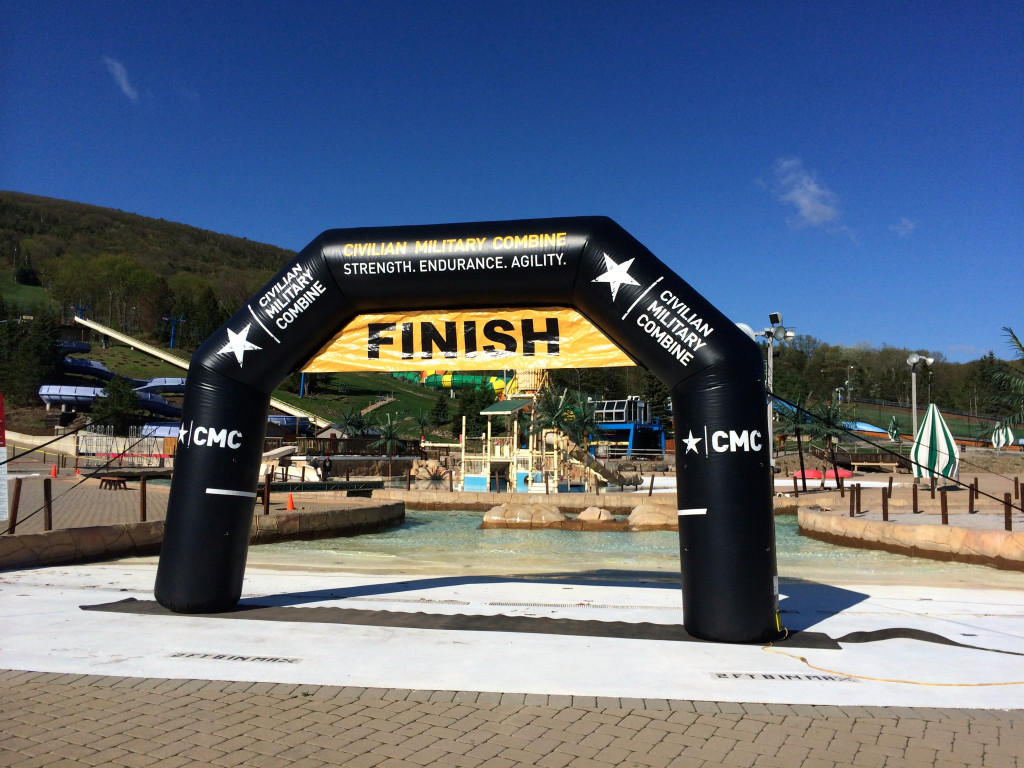 As usual, no blow by blow obstacle break down – watch the video for that – but what followed next was 5.5 miles and two hours of time on the mountains. We carried a 50lb wreck bag around some steep ski slopes, climbed the signature metal ladder walls, a unique rock climbing incline wall, culvert walk through, several 10′ walls back to back, with several reverse incline walls back to back following those. The signature metal 5′ walls were in abundance, and usually right next to deep ditches, meaning the 5′ wall was now a 6 or 7′ wall.

There were some really unique obstacles too – a man made mud crawl under wire, a great slip and slide – at one point we heard rumor of a “snow crawl” … in May? Sure enough, a mud crawl pit that was actually filled with real, honest to goodness snow. That was tough on the knees and hands, and led into a huge pile of snow to climb over.

There were some hanging cargo nets – another signature CMC obstacle with their Brooklyn Bridge cargo container setup – ending in hanging firemans poles, which I’ve never seen anywhere else, right at the end a very cold lake crossing (with a rope for us non-swimmers) – ending in the solid steel “Devils Dick” wobbly ladder, then a serious slog through an artificial river that smoked your thighs as you tried to “sprint” to the finish line, which was right at the edge of the water.

The terrain was fantastic too – very reminiscent of the NJ Spartan Super with it’s use of ski slope climbs, bushwhacking, single track trail, and even a period where we moved up a small river. I heard that last year they actually hit up the summit of the mountain, and while we didn’t do it last year, we did do a lot of climbing, and we kept at it right up until the last possible moment.

Considering the length of the race at 5.5 miles, this was very generously supported. Easily five, if not six water stops. Volunteers helping in areas the course markings may not have been so clear (but the markings were fantastic in general) and every water obstacle, from the slip and slide, lake crossing, wave pool and the final river had plenty of life guards who were actively monitoring the obstacle – by that, I mean they were walking the shores and sides, walking with an athlete until they left – and NOT sitting in a deck chair, working with their tan and waiting for someone to call out in trouble. Impressive and reassuring.

The Schwag and stuff

CMC has great schwag. Some of their events I’ve run have had location specific T’s as the give away, but that was not the case this weekend. It’s still a nice T, but I love event specific shirts 🙂 The dog tags though – these are high gloss, event specific tags. People who podium get gorgeous gold tags. These were picked up at a tent off to the side, and handed to us in a promotional drawstring bag to keep them clean. Free beer with the wrist band we picked up at check in, but sadly it was only Coors – even more tragic when we drove past a local brew pub on the drive in, just minutes down the street. I would have loved to see a local brew as an option, even if it wasn’t the free beer. 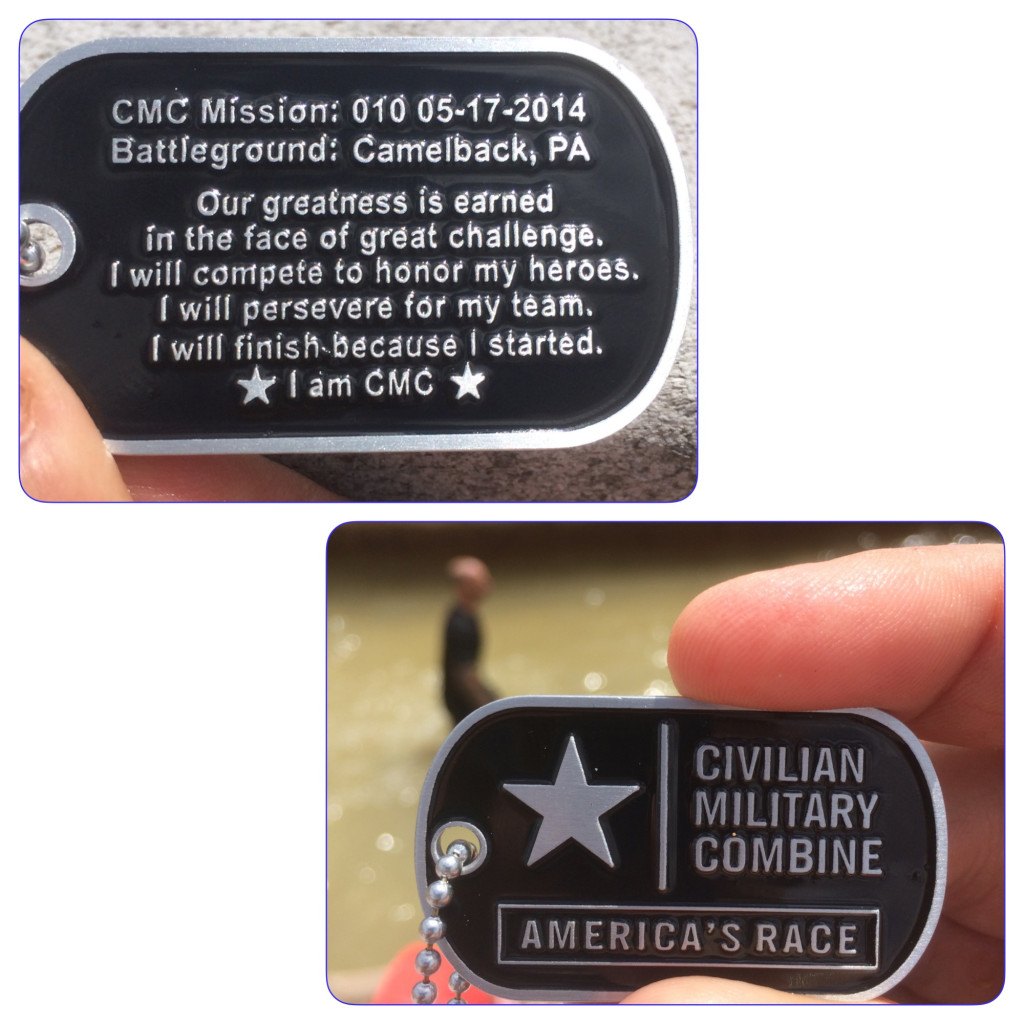 Food was being vended by the venue and was mostly your usual fried /grilled / reheated affair. They’ve had amazing food vendors in the past (Brooklyn’s event, with a paleo kitchen and hot meals was best), so we did miss those.

CMC puts on a great event. No other way to put it, really. The owners and staff are welcoming and friendly. They recognize and welcome their regulars – from Crossfit boxes to OCR communities. The judges in the pit and the volunteers on the course are well trained and enthusiastic, and their obstacles are well built, challenging and fun. The pit is unique in this world, and the way you are ranked and scored means it’s equally as important to your elite or podium folks as the course itself. No mountain goat trail runner domination here!

They also encourage and promote teams and community – and we have some amazing discounts available for New England Spahtens interested in trying CMC at the New England event – I strongly recommend people take advantage of those, and come try something fresh in the OCR world.