Any time you sign up for a new race, you immediately try and compare it to your previous races. Is it entry level like a Warrior Dash, or tougher like a Spartan, or will be it be as long as the Beast, or short, like a Sprint.

For the Civilian Military Combine on the USS Intrepid – none of that helped. In a sport that is rife with copycats and one up-manship, the CMC is something totally different, and as a result – nothing else out there today can compare to it. 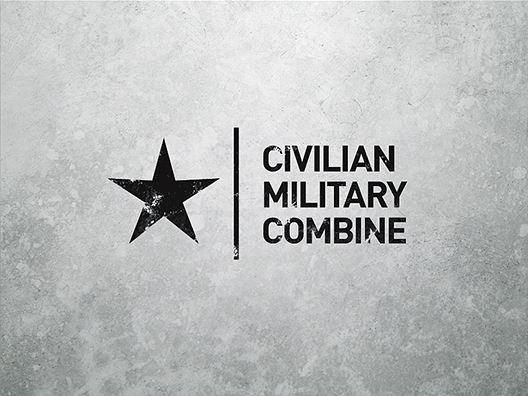 For those who aren’t familiar, I’ll recap – CMC is both a strength and an endurance test – designed to let each and every competitor push their own limits.  Costumes are explicitly banned. This isn’t a fun run – it’s designed for the kind of person who is genuinely interested in testing what they can do – the same kind of people who tend to find their way into our little community.

It’s a two stage event – The Pit, then The Course. 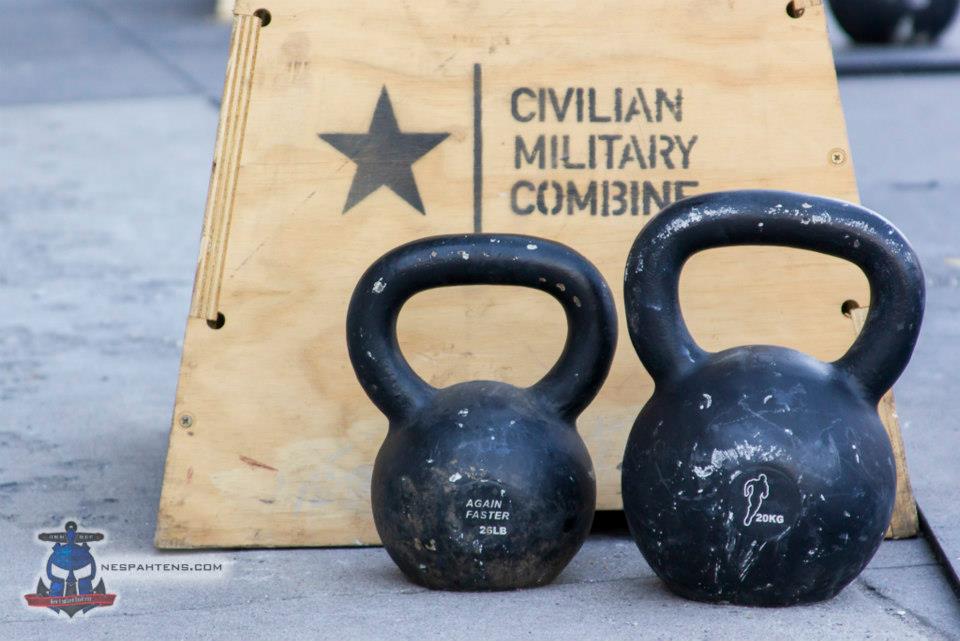 The Pit is a 7min AMRAP (As Many Repetitions As Possible) – which means for 7 minutes, you cycle through the following movements:

The weights are accessible, and regardless of your own physical abilities, this is designed to test your strength and leave you exhausted. It really works.

Almost immediately after, you hit The Course (which will differ at each event) – on the USS Intrepid, we had a short, sprint course of approximately 1/2 mile, looping around the pier in the shadow of the ship, and at one point, looping under the amazing wingspan of the British Airways Concord!

Of course, don’t think of this as a 1/2 mile run – in that distance, CMC had managed to cram 30+ obstacles! They had many many 5′ walls. Many many 10′ ladders, four or five cargo net climbs, a sandbag carry, a bucket carry, a tunnel, a horizontal cargo net, monkey bars, an amazing tilting ladder and a weighted prowler push. In Amesbury, we’re expecting a longer, muddier, hillier course 🙂

Those are the cold, hard facts – but was it any good?

Oh yes. The road trip down from central MA with Nele, Ben and Patrick was much quicker and easier than I expected, and we were at the venue before 10am. For the athletes, check-in was super smooth. We got an envelope with our timing chip, wrist strap and bib. For the spectators, and any time we had to work with venue staff , things were a little less organized – but the CMC side had their act together.

The venue was the entire pier in front of the ship – and they had brought in vendors from local Crossfit boxes, Crossfit suppliers (2pood!), Army and Navy and National Guard booths were onsite too, as well as a well stocked CMC schwag tent selling a range of T’s, hats and hoodies.

Everyone’s packet had a wave number on it – and as the day progressed, they call out your wave, and you have to line up to hit The Pit with the others in your wave. This process was new to me – and worked well – each wave had only four people in it – and the New England Spahtens made up wave 128, 129 and 1/4 of 130 – and it would turn out we’d be some of the last waves of the day, before the top 100 heat.

Lining up in a warm up area that had barbells, kettlebells and boxes to play with, when your wave was called, you would be moved out into a row in the Pit – introduced to your judge (all of who were sourced from local box, Crossfit Revenge – no bored teenage volunteers playing on their phones here!) – The day’s MC, Sean Rogers (who also happens to be one of the minds behind CMC) would count you down, and you’re off!

I finished my 7 minutes exhausted, with 105 reps, all told – and I know I can do better next time. Your “wave” was then moved to a water stop, and a start line, and you were lined up – then, with very little rest, we were released onto the course and immediately into the prowler pushes. I did pretty well here, and felt good coming off them, and into a sandbag carry – which went up a couple of flights of stairs, down and back a landing, then downstairs again – it was here that people started passing me :p

After dropping the bag, we hit the wobbly ladder – this was a tall ladder, on a hinge, tied down with a bungee cord – as you went up, and came down, it would move and bounce under you – so awesome. Oh, and monkey bars after this – I made those!

Then, the 5″ walls, cargo nets and 10″ ladders started. Really, they didn’t stop – a bit of a break for a bucket of water carry under the wings of a Concorde, and close to the finish line, a tunnel to crawl through – before the final obstacle, a horizontal cargo net to navigate.

A point to note – we’re used to seeing wooden obstacles. At best, made of scaffolding poles. The good races use heavy duty wood and bolts and everything feels sturdy and safe, the worst races use cheap wood and small fixtures, and you know they own’t last more than one event, if that. CMC used solid metal construction EVERYWHERE. The walls, solid metal, with smooth pipes at the top. the cargo nets, solid steel. The ladders the same. Everything was so incredibly high quality, the monkey bars (which were sourced from a well known Crossfit supplier and designed for super heavy duty gym use) looked right at home alongside them all.

Crossing the finish line was a rush – the course was short enough to get your adrenaline pumping, but not long enough to burn it off – without exception, we were all shaking and buzzing afterwards, and it took a while to settle down again!

The schwag was a neat drawstring bag, unique, high quality, CMC Intrepid race T, a silicon bracelet – which I immediately lost 🙁 – and a really nice, lacquered dogtag and chain, also unique to this event. 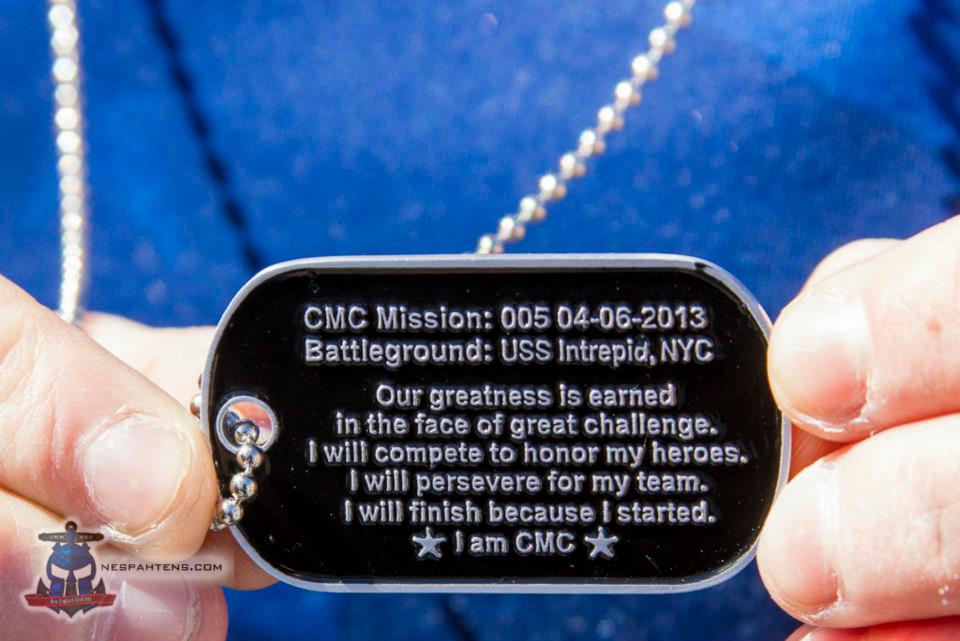 The other huge point to note – the coverage of this event was amazing. They had so many professional photographers from our friends at Nuvision, along with a huge number of people doing video. Access to take our own photos was second to none, and spectator viewing was incredible, thanks to the short nature of the venue and course.

We were excited (well, most of us were) when Spahten Steve DellaCroce qualified in the top 100, and was able to go on to run the course again – I’m not sure he was quite so excited … the end result, we got a Spahten in 49th place 🙂 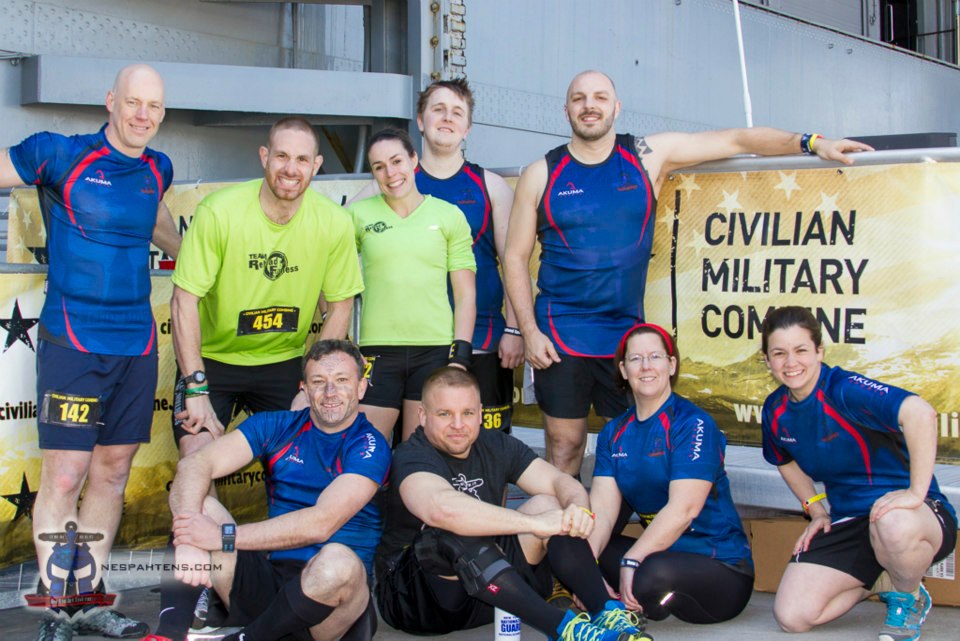 In conclusion – CMC Intrepid was a fantastic event. Well run. Super challenging and testing. Great memories and great schwag to let us relive those memories. I would easily rank this as one of my favorite events of all time, and I’m already signed up for Amesbury, MA on June 29th.

Code MA100410 for 10% off any event. Join team NE Spahtens if you register for the New England Mountain Assault!