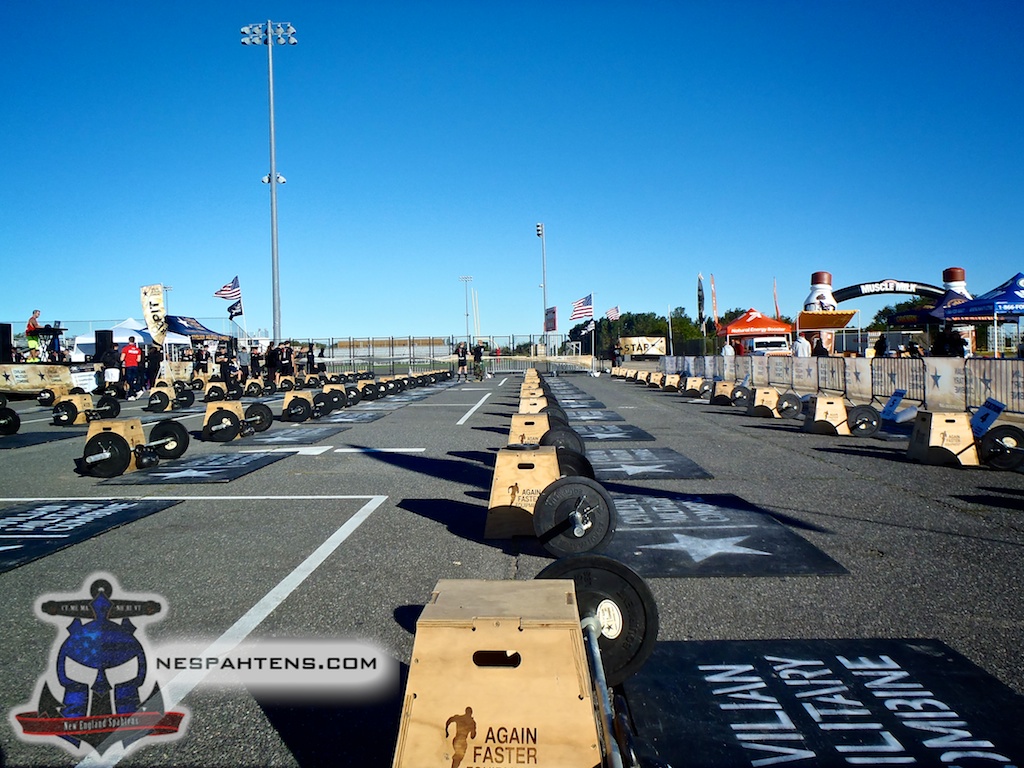 There is a good reason why Civilian Military Combine has become one of my favorite obstacle course race series – and despite their being several local options, and a great argument for a rest weekend – I still headed to Brooklyn, NY to take on the CMC Urban Assault Challenge this weekend.

CMC is a unique event. If you aren’t aware by now, you start your race in The Pit. This is where you complete a 7 minute long AMRAP (As Many Reps As Possible) of a three movement workout. Full details are in other reviews and on their website – http://www.civilianmilitarycombine.com/overview/

This is designed to test your strength in a way no other event I’ve ever participated can. It’s a full body workout, and if you do it right, you do it to exhaustion. Then you line up for the race itself, to test your endurance.

It can’t be overstated – this strength workout is fantastic, and everyone should do it. CMC recently offered a “race only” option that a few walking wounded take – and the Urban Assault was also the first time they offered a scaled option, for folks who struggle with the regular weights and movements.

Lets get into the meat of the review.

Aviator Sports Park was our venue – in Brooklyn, NY. Roughly a 3.5 to 4 hour drive for us, we stayed at a hotel the night before to make the morning a little less chaotic – so we only had a 10 minute drive there. The venue was super easy to find, and good signage brought us to the massive parking lot right next to the event grounds. Free parking is always welcome! The CMC event venue was spacious – easy to get to registration, best vendor village I’ve come across at an OCR, great spectating at the Pit and easy access to walk to major portions of the course if you needed.

The course itself was totally flat. My GPS reads a total of 42′ of elevation change, and much of that was on the obstacles themselves. A flat course meant the winds coming off the water was a bit chilly in places, and anywhere the course was open was totally a runners course – fast times were expected.

CMC did fantastic. Firstly, the vendor village was awesome. They had tons of great vendors – very few of them feeling out of place. There were vendors from Crossfit equipment manufacturers, food and drink and supplement vendors, clothing and apparel vendors, energy drink and even chocolate milk vendors.

My favorite piece though – the five biggest Crossfit boxes (the five biggest teams of the day) also had their own space, right there. Some of them used it to sell their box and box t shirts – some used it as nothing more than a place to gather and hang out – and one used it for inflatable jousting tournaments (for charity). Why doesn’t EVERY event out there promote and encourage their biggest teams like this? Such a simple thing – set aside a small piece of space and let your biggest fans and biggest promoters get some fun times in. Great move. 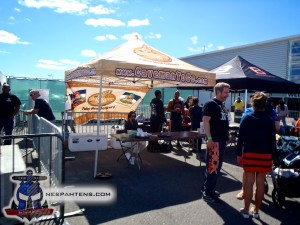 The food was fantastic. We’ve become so used to getting junk food after races – burgers, fries, hot dogs, pizza – that when something different is offered, it’s so welcome. CMC partnered with Caveman To Go – a New York based company offering paleo foods delivered. For CMC, we pre-ordered a hot meal, and at any time during the day we could go over and pick it up. Sitting down to warm chimichurri beef steak and parsnip puree after a race was absolutely fantastic. In our New England region, there are options with companies like B-Good who offer fantastic farm raised beef burgers, and more – yet we keep getting the same pizza, soggy burgers and fries. Time to step this game up, New England.

The beer, an equally important part of many people’s races, was not so good, with Bud or Bud Light. Worth the free beer ticket, and not much more. It looked very much like this was venue provided.

Music was pumping, crowds were mingling and it was very much possible to hang out here most of the day without getting too bored. We ultimately left around 2pm to hit the road.

The reason we’re all here. CMC is broken into two pieces – the Pit and the Race. Strength, then endurance. 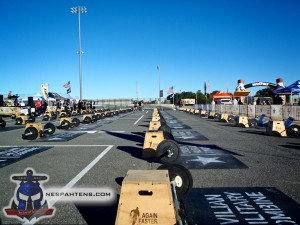 The Pit is a 7 minute AMRAP. This time, they mixed it up, and started us with the burpee box jump, then the kettle bell swing, then the push press. I did the standard Pit and scored my lowest score yet, with 96 on the record. Beth did the scaled division, due to a shoulder injury – the 45lb push press was subbed with a 26lb KB press, then a Russian KB swing, and box jump, with no burpee – she scored well into the 150’s! Our friend Chris also had an injury, and took the third option – sitting the Pit out entirely and waiting for us by the start line.

At the end of the Pit you line up, grab some hydration from the table – offering up both water, and some companies products – and 2 minutes later, you go off on your run. 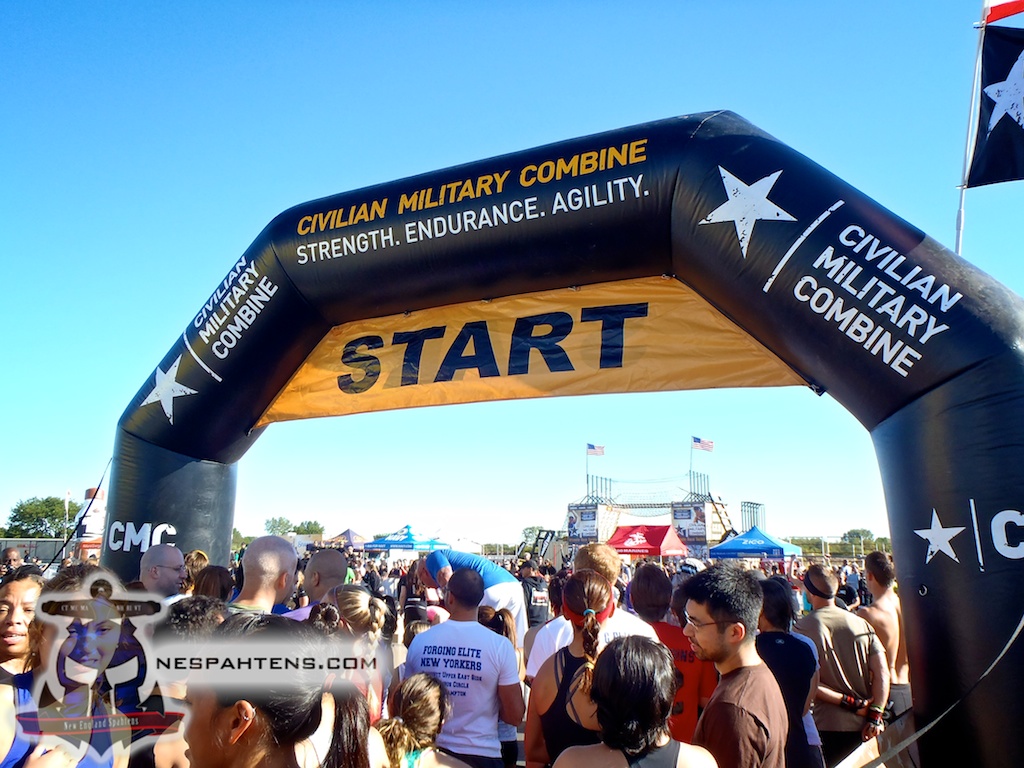 The Race was a flat, 5k course. Right from the gate you were running easy trails with some of CMCs signature all steel walls to break things up, before hitting a sandbag carry – just some tube sand, and they appeared to be breaking open just like any other time we get to tube sand carries. Without trying to remember every obstacle in order – and I didn’t run with my GoPro (which I regret) – it’s easy to say that the first mile and a half was fairly open, flat and mostly a runners course – but the obstacles were heavy and thick for the second half of the event.

And what obstacles! At previous CMC events, we’ve seen fantastic quality all steel constructed walls, ladder walls and wobble ladders – along with some great two story high cargo containers with balance ropes and hanging pole descents. All those guys were here – but they had brought out some really nice wooden obstacles too – as well as some new, and innovative challenges. 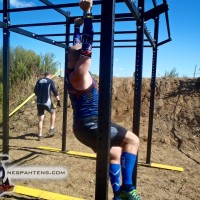 There were a few wooden high walls, with a step to get up for the ladies. There were several really steep A walls to climb up with a rope – with the same for the descent – these were quite tricky to get down again! There was an incline ladder wall that was super tough – I’ve only seen it’s like at a Spartan (and this was tougher). There were some ladders to the top of double stacked cargo containers, then climbing over some piping that the course ran through – on the top – super fun! Even some monkey bars right out of a cross fit box – which became only my second set of completed monkey bars at an OCR ever (yes, I have problems with monkey bars!).

We had a couple of prowler pushes that caught many people unfamiliar with them out, and a long, muddy wire crawl that looped around in a couple of circles, and through a water jammed pipe. We even had a really neat dumpster dive water obstacle to chill you off. The finale was a cargo net and rope climb, with the awesome horizontal net to finish.

As I said, the final mile and a half was *really* obstacle heavy, with somewhere in the region of 30 obstacles – if you wanted to make up time running, this wasn’t the place for it to happen.

Of course, these reviews aren’t here to blow sunshine up anyone’s ass – and no race is ever pulled off without a hitch. For as amazingly constructed as CMC obstacles are, there were a couple of spots things needed some work.

The wire crawl was WAY too loose, and the wires they used (not barbed) were laying in the mud by the time I got there – it became a bit dull simply lifting them up to put them over your head.

The dumpsters full of water wasn’t really clear if this was a spot to wade through, or a balance beam across – I saw both, had no one telling us which way to go. I ended up jumping in and wading.

Course markings were a little vague in spots. Right at the beginning, after the sandbag carry, we saw a couple back tracking having gone wrong somewhere, and when the wire crawl took a turn left to over a dirt mound, people were turning right and going back on the portion of the course they already did.

I heard some complaints about the A walls being too tough – especially on the way down again – this didn’t really bother me though.

The biggest problem, in my opinion, was with the second to last cargo net. A solid steel structure, with webbed netting to climb up, over the top and transition right into a knotted rope to come back down. The nature of the structure meant lots of people were getting their feet twisted in the structure at the top – and with no platform or place to move onto, getting onto that rope was a serious challenge that could go horrible wrong if you got it wrong. Fortunately, many people were coming down the support beams – using them like ladders – rather than trying for the ropes and falling 15′ or so. While I made the ropes – it was a hairy moment, and I think the entire obstacle should have been reversed (rope climb UP, them onto the cargo net DOWN).

Across the finish line, and picking up a pretty awesome race specific T that I’ll actually wear again and again, my Urban Assault CMC dogtags and some hydration. 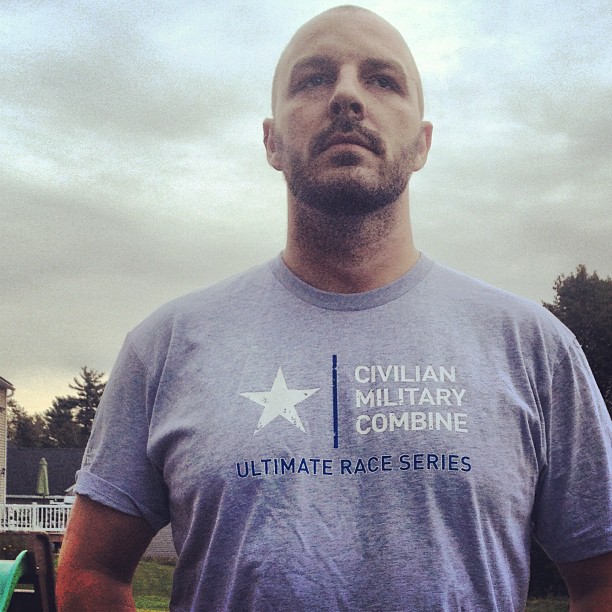 I said it before – CMC continues as one of my favorite race series. The challenge of the Pit is unique, and everyone interested in testing themselves and their limits should do it – then the courses themselves are always a great time, with some solid obstacles that continue to impress.This event was CMC’s biggest event yet, and while the Pit area had a constant crowd, the venue didn’t feel cramped, the music was pumping and motivating, but not over powering.

I know CMC is growing – and doing it organically, naturally and slowly – unlike many other OCR series who are running into their own problems. Hopefully, this means they will be around for the long haul, and I know I’ve got no hesitation in recommending them to the entire New England Spahten communtiy – I will certainly be actively seeking them out more and more in 2014.