Due to the fact traffic was worse than I thought it was going to be, something I should understand having lived on Cape Cod most of my life, I was unable to race. My wife Leah DID have the opportunity to race it so this review is from my perspective on what I could see and what she saw out on the course. I did speak with a couple other Spahtens as well, so this ought to be somewhat cohesive.

We got to the venue shortly before 11:00 am. Parking was simple. I spoke with a lot of people who took the shuttle in from Seabrook and it seems that past issues ASP had with buses were solved. It was as smooth as it could be and buses were on time without any wait. Big ups for that!!

First things first, there was a bag check… While I was en route to the venue, Amesbury Sportspark, I was seeing posts on FB about the bag check. Folks were a little upset with the fact their bags were being rifled through and items were being taken  out. I am not sure if ASP has done this in the past as I have never had my bag checked like that before there, or maybe it was the Dirty Dash folks? Either way, taking people’s water away and or snacks, food, energy gels, etc was pretty bogus. Certain things need to be taken into consideration, like people’s diets and nutrition needs. At most OCR races there are not many options for food. It’s your usual fare of burgers, hot-dogs and maybe a wrap or two. For others this is not ideal so they obviously bring what they can to supplement their nutrition while racing. Until races start offering more options I think they should not be checking people’s bags for food. I was adamant on bringing in what I brought in and explained that it was food my family eats on a day to day basis and fits with the dietary needs we choose. Rather than argue, we walked in with my bag intact and contents still inside. We did make purchases; we bought beer, got some slushees for the boys and Leah had a chicken ceasar wrap. 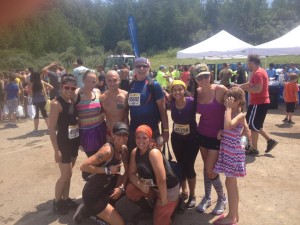 Registration was fluid, as long as you already had your waiver filled out before hand. The website said if you didn’t bring one they would charge you $1 for another. I did not see this happening and to be honest, thought it was silly at first. The more thought I put into it though it made sense. By having it done in advance it makes the process quick. Perhaps they should dole out burpees or something though, charging money is kind of cheesy.

Leah jumped into the next wave that was about to go off.

My boys and I walked around to check out what the vendor area and stuff was like. There were quite a few vendors, Honest Tea was passing out samples, Pure Protein was handing out bars by the fistful. It was a small vendor area though as they decided to keep it off to the left, not the center like most races seem to do there. Seems they really undervalued the space they had, or maybe they did it to make it seem busier by packing everyone in like sardines? Either way, no big rip on them for this but it could have been set up easier so it was more convenient to walk around.

Leading up to the race it was clear things could easily become a debacle here for Dirty Dash. I guess Dirty Girl was taking their time packing up and it was last minute setup for Dirty Dash. Quite a few of us actually thought they wouldn’t be able to pull this off in time. I’m pretty sure this had an effect on some of the obstacles listed on the map. There was no monkey bar rig and a few more were missing as well, I’m putting money on the fact it was in their haste to get up as much as they could in a short time. 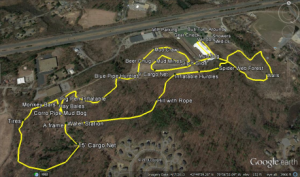 Leah did fully enjoy the course. Anyone who has been to Amesbury knows the terrain and THAT it is always the biggest obstacle. Dirty Dash made good use of the land, not as challenging of a course as some of the bigger national races but they still kicked people’s butts on the course. They had their staple inflatable obstacles as well as typical fare like walls, cargo nets, etc. Comparing it to others, Leah said this was just a decent fun run and that’s not a complaint. She had a blast! But, she was not super challenged by the obstacles. The pricing on the event was cheap enough, and most people got in early or got a deal of $30. I kept hearing people say that $30 is exactly what it was worth. There were quite a few bottle necks at some obstacles, that’s due to the fact they were only letting two or three people through at a time. I understand the safety aspect, but maybe break up the heat times a little more? Sending people out every 10 minutes is a huge no-no if you plan on things going smoothly on the course.

Here are couple major complaints I heard and witnessed, besides the bag check. There was only one water station. It was a hot day, they could have at a minimum used on more. There was no timing! Again, this was fun run so maybe it was of no concern for others. Most of us though like to be timed to see where we are at with our race fitness. Maybe it wasn’t a big deal for other’s and if so, to each their own right? I like timing chips, but that’s just me. 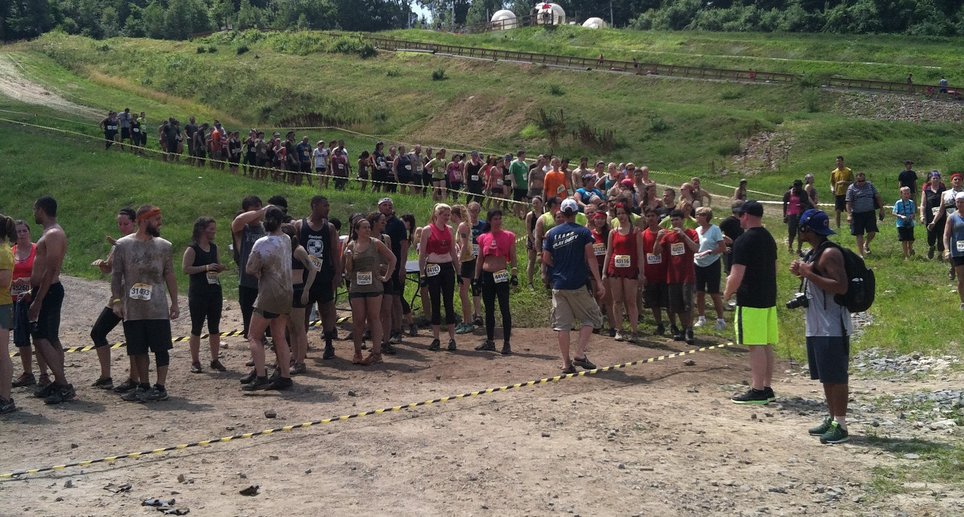 Here’s where Dirty Dash screwed up royally though. As you come down the front hill and turn right toward the finish you hit a huge, and I mean HUGE, line of people lined up at the finish line. This line grew and grew at points actually going up the hill and could easily be about 50-100 deep. What were they lining up for? The folks from Flo-Foto were taking pics. That should be cool right? Who doesn’t want a pic right at the end, covered and mud and feeling accomplished? The photographer was getting two, three and four poses out of people. For real? Take one and move on man, you got an enormous growing line, get things going! He looked at the line many times, paying no mind to it. I’m sure it was all about getting “the shot” though as Flo-Foto does not offer free photos, so they charge for them and what better way to get some loot than to get the right pic?! Needless to say, people started just skipping it and moving on to grab their t-shirt and Dirty Dash hanky! No medal! But, if you signed up they made no promises for it so you should have known. 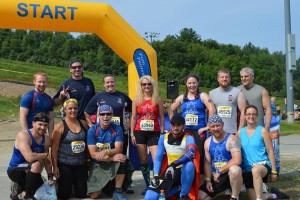 It was a great day for racing, and even though it sounds like I am really making this out to be a bad day, it wasn’t. I’m just saying it was what it was, a decent fun run at a decent price. If it were any more money than it was there could have been a lot of disapointed people, but they all had smiles on their faces from what I could tell!