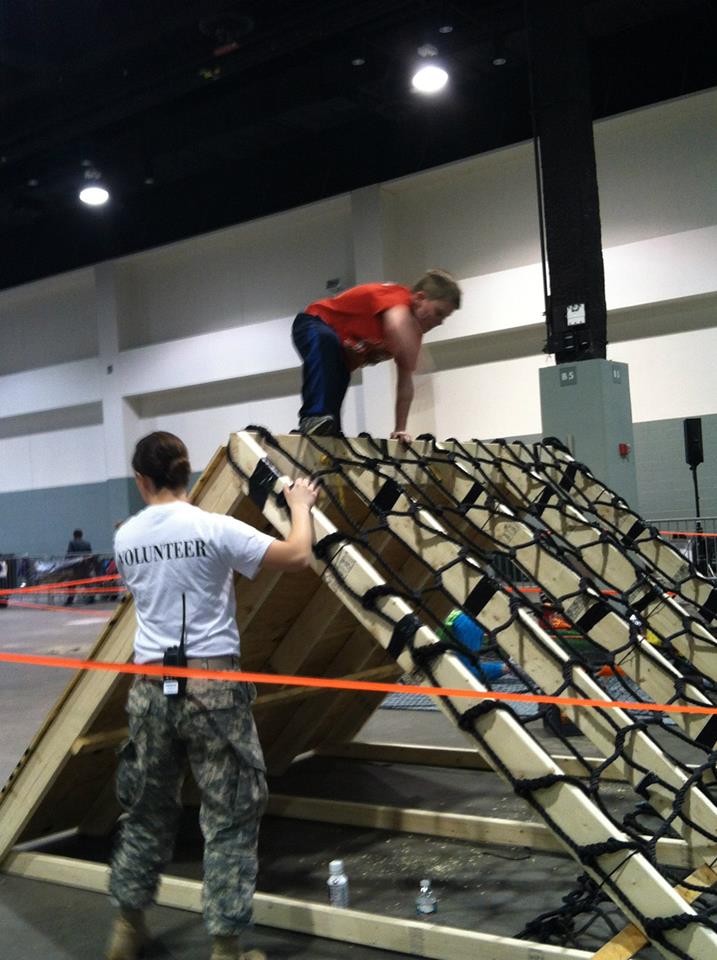 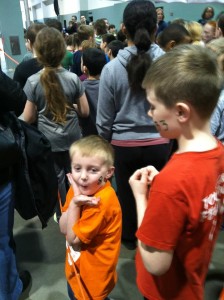 This was my first experience with Extreme Field Day, but have been following their growth since the inception. Having an experienced owner/ CEO, my interest was definitely piqued, so when the opportunity arose to have my boys run Extreme Field Day, we were all over it.

This winter version was not so much a race as it was a way for the kids  to hone their obstacle racing skill. They were not timed, the competition level was minimized because it was a training course.

We parked in the garage across from the DCU, it was pay for parking, but for the amount of time we were there the $4 didn’t break the bank. After getting out of the garage we crossed over to the DCU and tried door upon door but they all seemed to be locked. I may have missed the e-mail, but we were finally told to go down to door 2.

Upon entering, the registration table was just up ahead, and was easy to get through. Leah mentioned just how easy it was to get through. They just checked your kids name off from a master list and you were gestured into the area where the course was. It was very easy for folks to bypass the table and enter for free if they wanted. Ideally, they should have had something setup like wristbands or something. I am pretty sure they lost a bit of cash! 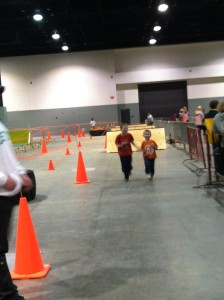 Anywhere you put a bunch of kids, with a bunch of over protective parents, there will be chaos. This was nothing short of that. I’m pretty sure the fact the city was about to get hit with ANOTHER snowstorm that people came out early to get their race in. Because of that heats were not the way they were supposed to go off. On paper it seemed like it was going to be so simple, but as we all know that stuff never happens the way it’s supposed.

Extreme Field Day explicitly offered heat times based on a child’s age. For instance, my 5 year old (Colin) should have run with the 4-5 year old group. My 10 year old (Alex) should have run with the 9-11 group. This was not the case. Each heat was intermingled, kids of all ages poured into the starting corral. The guy on the mic didn’t seem to worried about it, he set the heats off every 10 minutes or so in about 25 kids each heat. That was great, because everyone moved through the course quick enough. But, because it was not the way it was supposed to be, we sent Alex off with Colin to make sure he didn’t get trampled by the bigger kids. 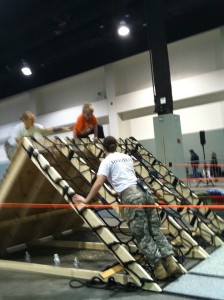 If you’re going to set aside times for age groups, than a quick recommendation would be colored wristbands. As each kid checks in to the registration area than can be put on, simple. That way if a 5 year old is supposed to go out for his 11am heat he goes out with others his age, not at 11:40 with kids double his/ her size. Again, I did appreciate that Alex stepped up, like the awesome big brother he is, and ran rabbit with Colin.

The course itself was cool, the boys really enjoyed it. They had sandbag carries, running through tires, cargo net climbs, over and under walls. There were spots where it got slippery, on some of the tight corners, but most kids were tough enough to shrug it off and keep moving.

The volunteers were extremely accommodating.  Colin was in awe because a good portion of the volunteers were National Guard, he’s got a thing for soldiers and looks up to them. While on the cargo net climb one of them even “raced” against him, and he “beat” them. This gave him a huge sense of accomplishment and Leah thanked her for it. 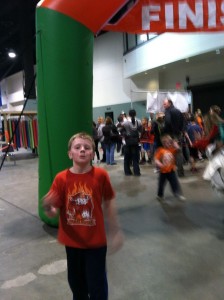 At the finish line they were given finisher shirts, and we didn’t see them, but certificates of accomplishment. My boys were psyched about the shirts, so the certificates were soon forgotten about.

There were a bunch of cool vendors from local karate dojos to CrossFit gyms that set up a couple of obstacle stations to a great chocolate booth, Pure Fuel Chocolate (which will be reviewed here soon).

All in all it was a great time. I wish we could have hung around longer and met up with fellow Spahtens that brought out their Spahtkins, but alas, it was snowing and my car does not like to make it up the hill to our house when there is but a measly dusting on the road. So, rather than get stuck AGAIN, we headed home early.

Thanks to Theresa, Heather and the rest of Extreme Field Day For Kids crew. You guys have something great going and I hope to see it grow and grow.