FIT Challenge has a special place in the history of the New England Spahtens.

It’s a local race, put on by one guy in his spare time. Just like so many others across the country.

But, FIT Challenge is special to us – because we consider Robb McCoy – the race director of FIT Challenge to be one of our own. I don’t mean that he joined the group and hands us flyers (although there’s nothing wrong with RDs doing that) – I mean he runs on team NE Spahten at races. He roads trips with us to events. He rocks one of our drill shirts (with FIT on the back, of course) at local, regional and national obstacle course races. He talks smack with the best of them in our Facebook group, and is ready to help anyone – from other RDs to athletes and participants at the drop of a hat. 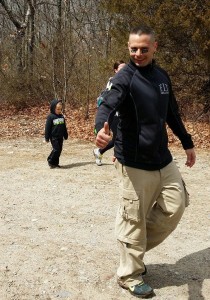 Because of this unique approach to interaction with the community, the community supports Robb and his event. This couldn’t be more apparant than this weekend when 191 registered New England Spahtens showed up at World War One Memorial Park in North Attleboro for the second FIT Challenge.

Thats a lot of people. Our second biggest showing outside of any event that wasn’t a Spartan Race. Having been on the team with us at Spartan, Robb knew exactly how to keep us happy, comfortable – and to ensure that 191 of us came away fans for life. Boy, he did that in spades!

Robb is smart. He knows that companies like Groupon and Living Social get the name out to a wider audience than a local race can afford on it’s own marketing budget – so he made sure to put them to work for him, and also avoided the trap of offering prices lower to these discount sites than you could get direct – a lesson many OCRs learned back in 2012 and 2013, but still goes on today. As a result, he gets a great bang for his marketing buck, and both races have pulled in considerably over 1000 participants (I believe total count for FITII was 1400+, including race day registrations). For an event that doesn’t have to transport it’s gear, or store much – those numbers are fantastic. 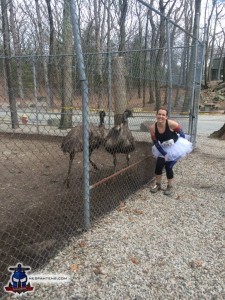 The venue – WW1 Memorial Park was really easy to get too from 495, and despite being a really early start for me, I got there in good time, and thanks to a team perk, was able to park right at the NES area – essential considering the amount of family and team gear we’d crammed into the little Scion. Robb had set aside a section of the field for the NES team, and we set up camp right next to the finish line – quickly, this turned into tent city, a small open fire was lit, and the team filled it up with hustle and bustle – tons of kids, spectators, custom team headbands and special NE Spahten red bracelets that gave us unlimited laps of the course. Oh, and our course ran right passed Emu’s, as the venue has a zoo onsite. Who the heck else runs through a zoo?

We also had many people from the team out on the course – both volunteering for a free race, or crewing for Robb on gators as aid stations, volunteer co-ordinators and various other jobs, and our own team wave dedicated to NES and Unleashed – again, you want to make fans for life? This is how you do it.

Robb had promised us a bigger and better course than his first FIT Challenge, and thats another thing that can be checked off as accomplished. Spanning almost exactly 3.2 miles, the course had plenty of trail running sections – including a full mile to get going with no obstacles at all, and plenty of challenging obstacles. We saw more than a few 8′ and 9′ walls, over/unders, a badass teeter-totter that was scaring more than a few people. 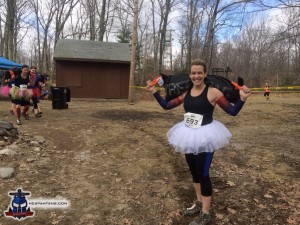 Making full use of the terrain – Wreck Back was there to give us 25lb and 50lb “sandbag” alternatives to hike up a 1/4 mile ski slope – but the real killer was the small ski lift hill after that – talk about a glute workout! That hill was short, but effective at slowing you down and making you ache in places you didn’t think you could ache.

Incorporating his local Crossfit box, Crossfit 508 was give an entire field to make a strength challenge – and these guys know their stuff. You immediately had to grab an Atlas stone – a big concrete ball. Pick your weight for the open devision, 35lb, 65lb and 115lb – then lug the thing around a field. I went with 65lb and did it unbroken, but my shoulders felt it the next day! They then took you to a section with 45lb barbells … 15 push presses, before picking up a 45lb plate and running to a cone and back. 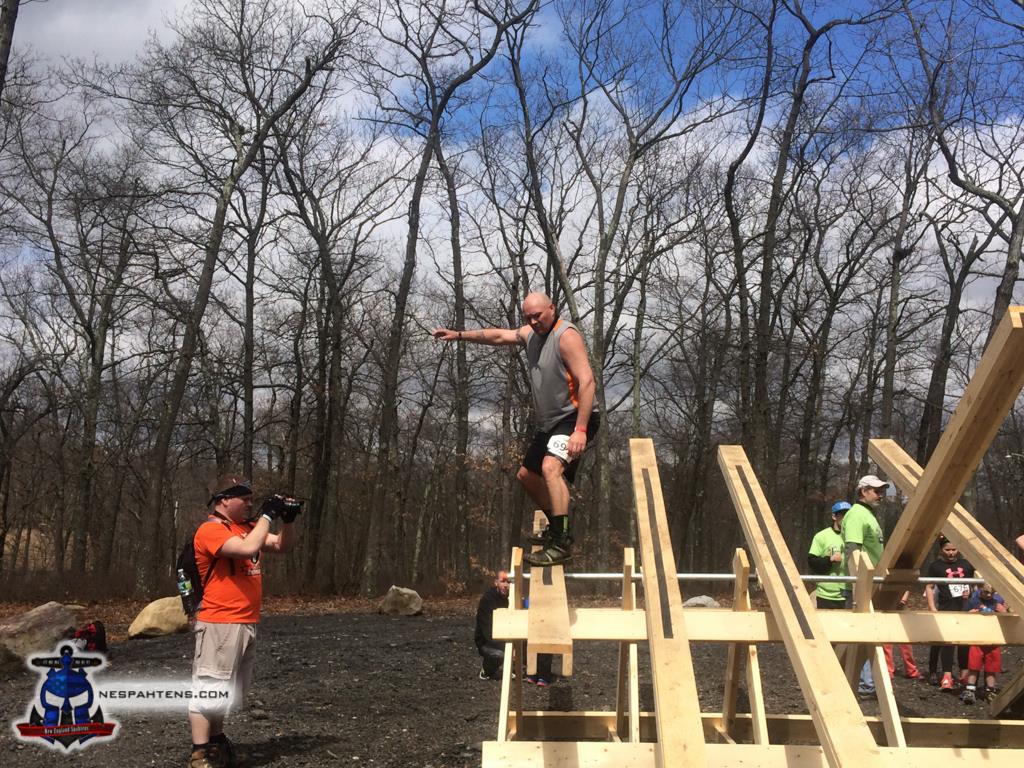 Then, the most fun obstacle I’ve seen – a tire push in a field that could only be described as “a mudbath” … my Icebugs prevented me from taking a faceplant in the mud, but many people around me were not so fortunate! This was brutal – I finished this gasping for breath and walked to the final finish of two 15′ ladder walls and a tire/hay filled dumpster. 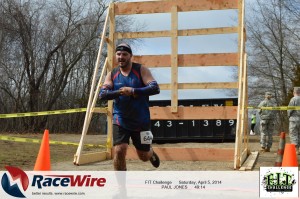 Of course, like any event, you will come away with feedback and issues you’d hope to see addressed for the next event – a full mile of trail running really thinned the pack out (which was a major issue at FIT 1), but the first obstacle being an 8′ wall caused backups in the team wave. The Wreck Bags (more on them shortly) were fantastic for this application – I am hopeful we’ll see way more of them in future local and national events.

Back at the festival area, Fred Smith of Smithfest Events (Blizzard Blast, Panic in the Dark, Music Chairs WC and more) was on the mic all day, announcing the waves and keeping the party going (and giving me crap in the starting choral – THANKS Fred). Vendors were plentiful, there were changing tents (mens *and* womens!), hose off area’s, plentiful supply of checkin desks (although there were lines for waivers when the shuttle busses came in). It was fantastic to see the Shale Hill crew vending Icebugs, and even more fantastic to see they’d managed to get a supply of factory seconds they were shifting for 1/2 the price a normal set of Icebugs would go for. I saw lots of new Icebug boxes leaving that venue!

While there were plenty of free drink samples to be had, food was lacking, as the venue wanted to provide their own – they need to actually move down to the vendor area if FIT visits again, no one knew they were there and there were a lot of hungry people. Fortunately, having our team tents and cars close by meant we had coolers, with lots of variety, and an open fire meant there were plenty of toasty hot sausages to be eaten. 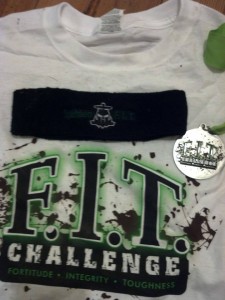 Lets talk about Wreck Bag. This is a brand new product from Lindon Fitness. They approached Robb a few weeks ago purely by change, and seeing the potential Robb immediately asked for a ton of them to use for his race. The Lindon guys have also donated a 25lb and 50lb bag to the New England Spahtens, and a review will be coming soon. They were also vending and selling the bags in the festival area, and from what I can see they pretty much sold out! I bought a 25lb bag for personal use too, and have sent it off to my local Crossfit box, Crossfit 696 to beat up on for a while, with great feedback. The bag is a proprietary woven material, with industrial stitched handles – filled with a propiatory rubber blend – this makes them heavy, and unbelievably comfortable on shoulders. They barely shift their weight around, and while they’ll get heavier in the wet, they won’t absorb water like a sandbag would. Throw that in with the price point being less than half what a sandbag from Rogue or GoRuck will run, and I think they’re onto a winning product. I saw a couple of local race directors having conversations with them … expect to see these at more OCRs and training days 🙂

FIT Challenge II provided pretty much everything you could ask for in an obstacle course race … a 5k distance course that kicked ass, at a venue that had Emu’s, with a ton of mud, great vendors and massive love for the biggest team. Family friendly, biggest team friendly, elite friendly (cash prizes – like, actual cash), fun run friendly.