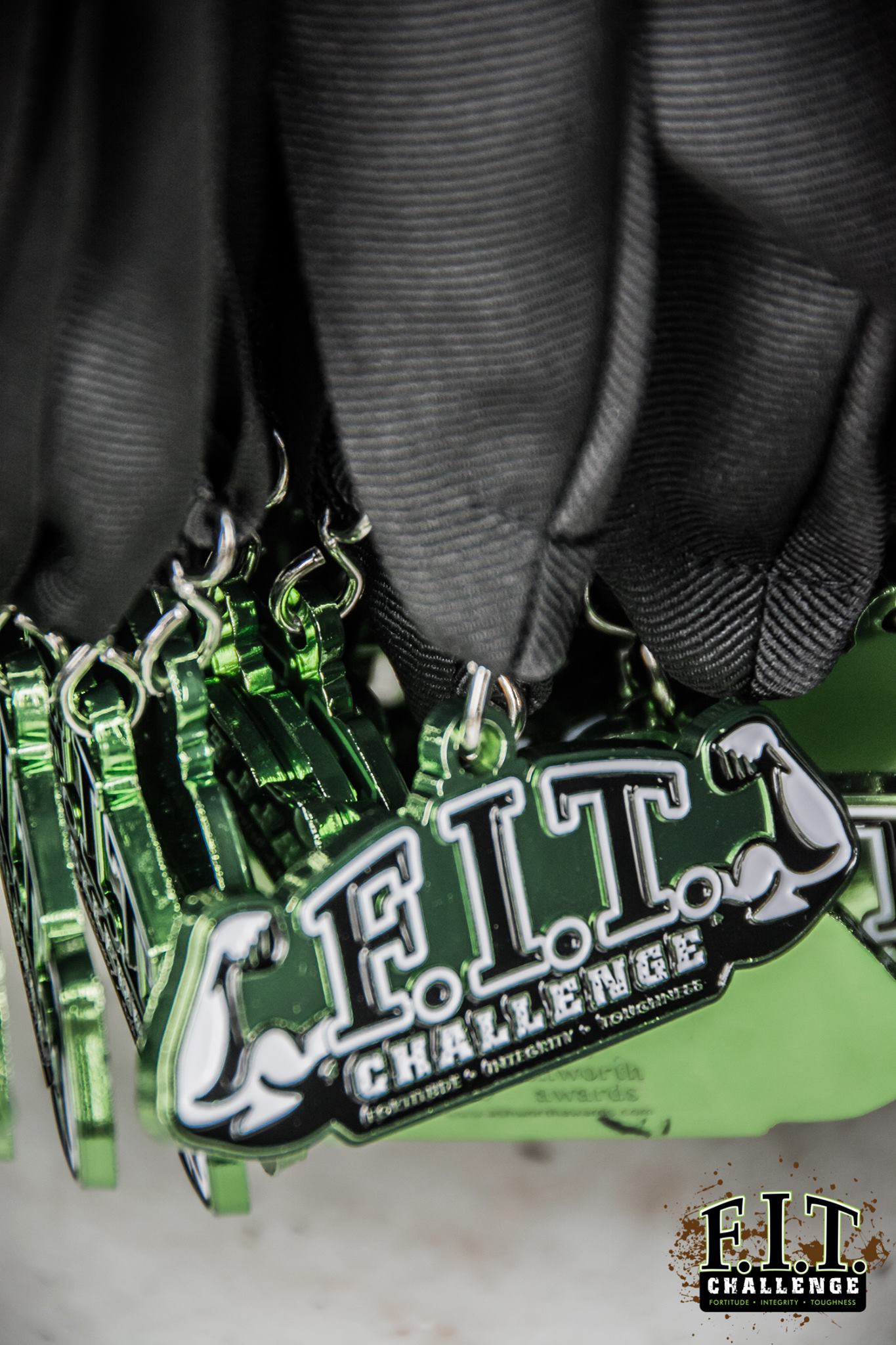 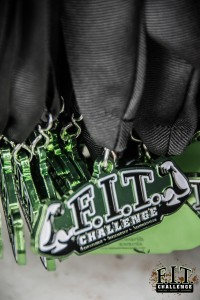 Another FIT Challenge. Another trip to Diamond Hill State Park in Rhode Island. Another glowing review.

We could be bored of this event – yet, somehow FIT Challenge manages to setup and deliver a shining example of what a locally operated OCR should be.

Here’s the deal – FIT isn’t perfect. There have been issues, and this event also saw issues, mostly around timing and results (Racewire were prompt about fixing them) – but it’s the way the FIT team operate, despite the issues that make it.

We’ll get to that.

The venue – Diamond Hill State Park is, according to Wikipedia, “a large hill”, that until the 80’s saw small ski operations operate on two slopes – all of that is gone, but FIT still manage to eek out every single possible foot of elevation gain, on every gnarly slope and climb they can, to put on what turned out to be a 3.5 mile, 1250′ of gain event that was easily the toughest FIT Challenge yet. GPS log below.

Parking is *right there*. Doesn’t get closer. Biggest team perks saw a space set aside, right next to the festival, for us to do with as we will, and FIT continues to be one of the few races in a year that I’ll bring the whole family to, because I know they will have a great time. The festival was small, but laid out in a much more cozy format – we never felt crowded, or excluded. Bathrooms were the onsite buildings as usual, which were a little out of the way, and while it’s nice to have a real building, the owners of the venue *really* need to consider cleaning them, you know, sometimes. Porta potties would have been an improvement. 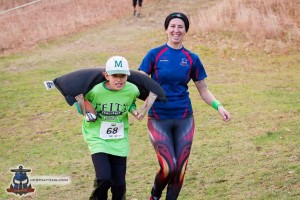 A very few vendors – including our friends at Wreck Bag, and a healthy eats truck. Weather was cold, and a bit gusty, but dry. A few popup tents went tumbling, but once you were moving it wasn’t so bad.

Start line and finish line were right alongside each other, easy to find, timing provided by Racewire. Several spots were available for spectator viewing and photography too. Seriously, it couldn’t be simpler or smoother.

The race – I’m not going to bother doing an obstacle break down – just my own thoughts. The course was excellent. Miles and miles of tape and flags marked 3.5 miles off well, with every hill, climb, trail and slope used to maximize the suck. I won’t go as far as saying we saw the worst this place has to offer, because the FIT crew will likely find more for April, but they have consistently improved and increased the difficulty of the event, and it easily ranks as one of the tougher 5k distance races on the market. 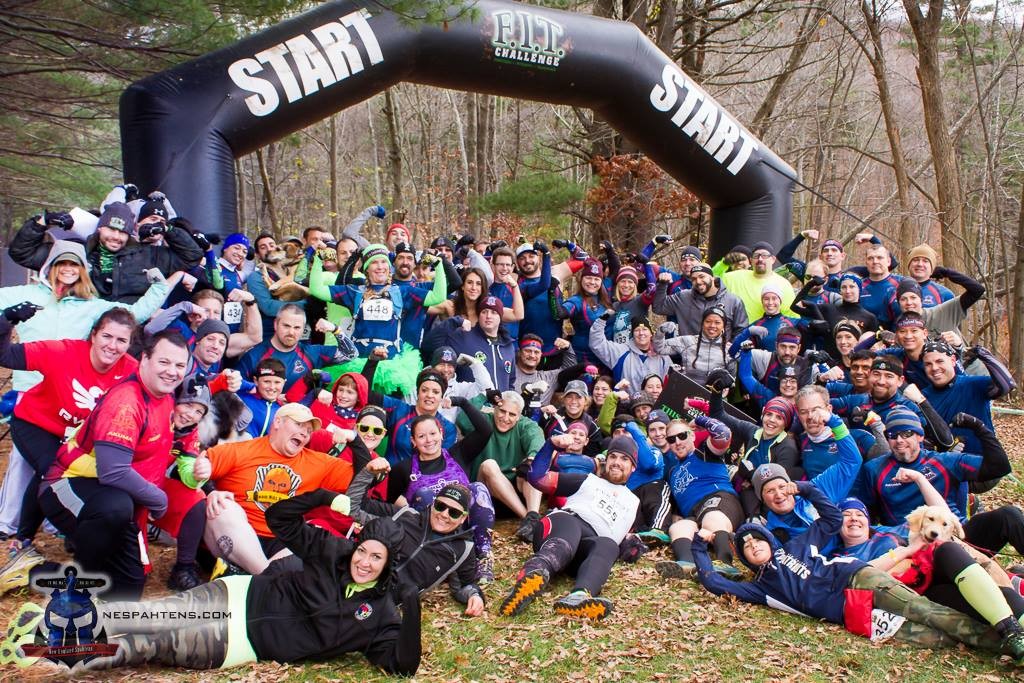 It’s worth noting – pretty much anyone can find something at FIT. If you are competitive, they have an elite division with mandatory obstacle completion and band cutting, if you run lots of miles, you can do laps – over and over for a reasonable cost – with prizes for that too. Open wavers can go out for a “fun” lap and not worry about completion or penalties – and my son loved the 1m kids wave, that covers portions of the adults course later in the day when the crowds are less. 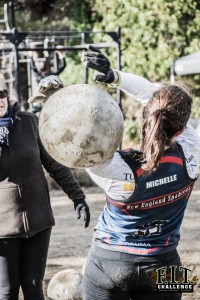 As mentioned, the course was hilly – and this did reduce the open space available for running (good, or bad – depending on how much you like running) and it did reduce the space available to put obstacles, but with careful grouping, and a relatively short distance, it didn’t feel like endless miles upon miles of gaps between obstacles, fortunately. The only real bottleneck I encountered was at a simple cargo net strung between trees, where several new runners from the previous wave were being careful about getting over. Considering it was strung between trees, it’s not possible to widen this up for better course flow, so it may need to be moved or built out as a stand alone option for future events. I heard of an abandoned attempts at a herc hoist, but never saw it, and I loved the local Crossfit gym that had setup two stations – one with 45lb bars for 30 shoulder to over-head presses, another with an atlas stone for five lift to shoulders.

The Destroyer, that I’d seen most recently at OCRWC was here, and the setup was tougher than the one used at OCRWC, and despite getting up on the single block a few times, I decided I wasn’t going to risk my ankle with a bad fall, and walked it. The peg boards on the tree’s were another obstacle I tried, but failed – and an ill timed cramp caused me to drop down on the floating wall. I also bailed on the monkey bars, making all the traditional bars, but unable to make it on the straight pipe. I truly hate the trend towards rig based obstacles in the sport right now, seeing as you asked. 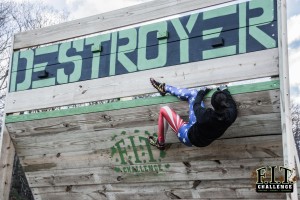 The Wreck Bag carry was neat – I took a 70lb bag and hit the slope, and using some of the recent haunted house / halloween installations was a smart move, putting more fun on the course, and removing the need to build it out.

All in? FIT nailed it – some tough obstacles, some easy. Some rigs, some climbing. Heavy carries and strength based, and agility based. For a little local event, they manage to show some big box shows up.

Where can they improve? You have to get down to niggly details to find answers to this. There was an issue with medals, so “buy more medals” is an easy fix. The swag overall was good though – I think this is my favorite T Shirt from any FIT event I’ve done – both comfortable, and tasteful enough to wear regularly. Course, obstacles and flow were near ideal for an event of this type.

But, what makes FIT so special in a competitive market in possibly the most competitive region? 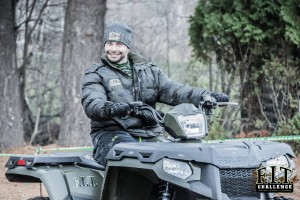 Because Robb cares, and shows it. He’s in our community and running with us, working with the individuals who can help, and doing everything he can to listen. There’s no secret sauce. People want to support their friends, and Robb and the FIT Challenge crew go to great lengths to be friends, not vendors. It’s the difference between a good event being received well, and a good event being picked to death by details.

I’ll see you at FIT Challenge in 2016 – one of our #racelocal staples.