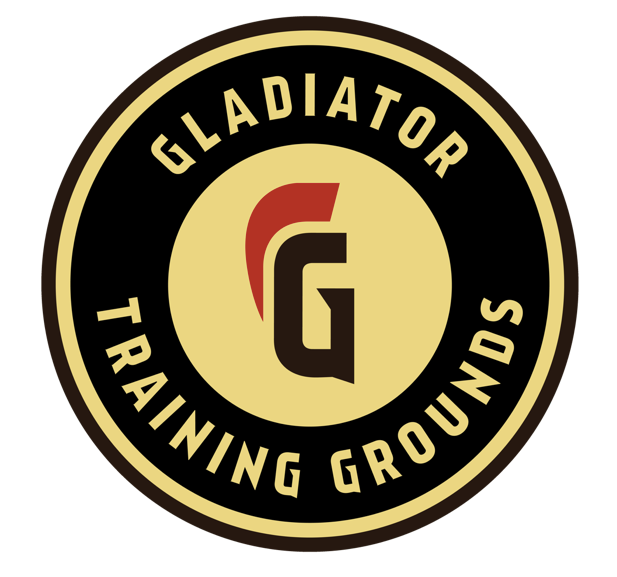 Editors note: Gladiator Training Grounds is a new series, picking up where Ruckus left off. The event owner actually purchased much of the Ruckus equipment, contacts and mailing list data, giving him a solid leg up in a competitive environment. #neselite athlete Jeff attended their first course, and provided our featured review. 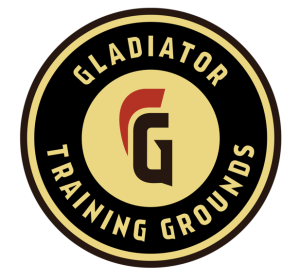 Parking/Registration
The race was held at the Marshfield Fairgrounds which is very easy to get to. As we approached the venue though there was no signage pointing us to parking. Luckily we had raced several Ruckus events and had an idea where to park. Parking was a quite expensive $10. Typically events charging that much for parking do so to cover the cost of a shuttle. Here, the lot was right across the street from the venue and no shuttle was required. I don’t mind paying for parking but $10 seemed steep in this case.

Once again there was no signage to lead us for parking to the venue. We knew the general direction we needed to travel so we made a path across the street and around a fence. As we headed towards what we assumed was the festival area, we found the registration tent.

This was a smaller event and registration was set up in a very smooth and logical way. There was a table with waivers to sign, which you then brought up to the registration table. Registration was broken up into two lines by the first letter of your last name. This process was very quick and I was handed a packet and t-shirt and sent on my way.

Festival Area
The festival area was sparse but this may have been because it was unbounded and massive. Basically anything that wasn’t part of the course was the festival area. This led to a massive open space with a few vendors. If this area was more defined, smaller, and laid out differently it wouldn’t have seemed so vacant.

There were tents for the Army and some kind of weight loss wrap thing that neither of us could figure out. Food could be found at the Be Good tent. If you haven’t had a Be Good burger you are missing out. They use all natural ingredients and make some of the tastiest burgers around. There was also a truck serving beer (Coors light and Blue Moon) and a cross-fit area hosting various competitions throughout the day.

The festival area also provided great spectator views of the course. Spectators could see the start and finish lines along with many obstacles. This allowed for a lot of photo opportunities.

Overall the festival area wasn’t bad. A few more vendors and some layout changes would have made it more welcoming and inclusive. The spectator access was fantastic and hopefully led to some great pictures.

The Race
The race itself was not timed and no official standings were kept. I can understand the reasons for this but as someone who can turn anything into a competition I was a bit sad upon finding this out. The waves went off every 30 minutes and were relatively small so I took the opportunity to run the course twice. It turned out this was a good thing because I missed a turn on my first lap, which cut about .4 miles off the course. 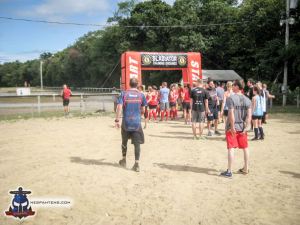 Before starting I actually had to ask a volunteer which way the course went because it wasn’t immediately apparent where we had to go. Before starting my second lap several people asked me this same question. This problem is easily solvable with a little more tape or directional arrows.

After the MC gave us the go-ahead, we were off. After a small bit of running there was a series of 4 ft walls. We then entered a sandy area that contained an 8 ft wall with steps and ropes to help with climbing, a slanted wall (also about 8 ft tall) that gave the option of using steps but could be conquered by running right up the middle with a slide down the backside, a jersey barrier, and a balance beam that was a good 20-25 feet long.

After a bit more running we had to run up, down, and around the bleachers in the “stadium” section of the fairgrounds and then back out for some more running. We then encountered more 4 ft walls, 8ft walls, and a long crawl under a net. If it wasn’t for a volunteer pointing out the net, we all would have run right over it as it wasn’t easy to see. After the net crawl we came across a cargo net climb onto a container. From there we had to roll/crawl across another cargo net onto another container and then jump off the other side. 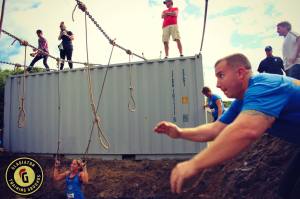 Following a bit more running, including a small section of trail, we came across a mud pit with what appeared to be the old Ruckus “air loops” obstacle hanging over the pit. There were several volunteers here but none of them explained what we were supposed to do. Some people ran through the mud, some people tried swinging from loop to loop, and some people tried putting their feet in the loops. I still have no idea what the correct method was so I just slogged through the mud and up the other side of the pit.

Editors note: The airloops were present in 2012 Ruckus, and hung low enough to stand in them all, while being sprayed by sprinklers the entire time.

The mud pit was followed by some more trail running before heading back out into a field for a pile of tires and a large collection of barrels. There were probably 100 barrels laid out so that you had to run around, between, etc. This wasn’t a huge challenge but it did a good job of slowing me down as I figured out a path through. 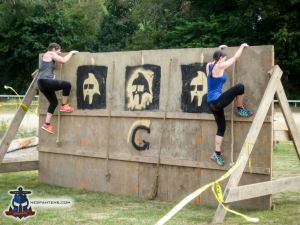 From the barrels we had to run around then up a large dirt mound. Coming down this mound is where I managed to miss a turn. We were supposed to double back and head right in the direction we just came from but the option existed to also go left. I went left towards the next obstacle on my first pass but I was supposed to go right. The correct path led us to some small inverse walls and the classic Ruckus obstacle, the “lobster traps” which are tube-like structures that force you to crawl through muck.

After more running, the course got back to where I made the wrong turn and it was time for another 8 ft wall, a dirt mound, and then another slick, A-frame wall before heading back into the festival area for the last few obstacles and the finish line. This section of the course was very obstacle heavy and these also happened to be the best obstacles. Within the last quarter of a mile we had the ranger bars, a cargo net/container/steps obstacle that required climbing up a cargo net, onto a container, over a set of steps, and down a ladder.

The final obstacle was a very large cargo net climb. This net was probably 15 ft tall and after coming down the other side, it was a short sprint to the finish. The total distance according to my GPS was 2.43 miles. 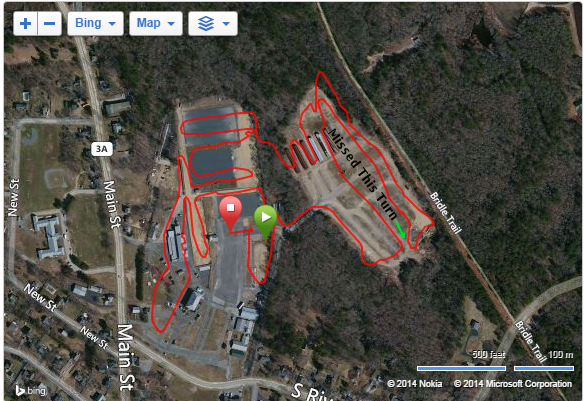 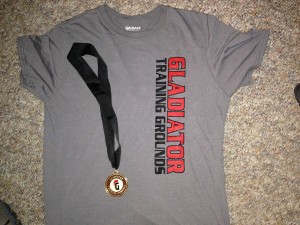 Race Swag
Upon completion we received a nice Gladiator Training Grounds medal and were offered bananas and water. When we picked up our bibs we were given our t-shirts which in my opinion are very good. Gray shirts with Gladiator Training Grounds printed vertically down one side and the title of “Athlete” on the back. This is a shirt that racers will definitely be wearing around long after the end of the race.

Suggestions For Next Time
Overall the course was fun but not incredibly challenging. Most of the course was marked well but as I mentioned earlier there were sections that were confusing. Volunteers did a good job of clearing up some of this confusion but when there were no volunteers available things did go wrong. Many runners (myself included) get completely immersed into the task of running and shouldn’t have to stop and think about where the course goes. These marking problems are solvable with simple arrows. There were a few arrows on the course but not enough to make it completely foolproof. Another course design suggestion would be to try and vary the obstacles a bit more. The 8 ft walls and A-framed slick walls are fun the first few times but when you have to do them over and over again they begin to lose some of their excitement.

If some of the suggested changes are made, this race has a great opportunity to fill in the void left when Ruckus went under in 2013. I hope this happens because having more quality local races is never a bad thing.