Grit n Wit is a brand new event on the calendar – and brought a brand new concept to the OCR scene. Combining both physical and mental obstacles, the promise of climbing over walls and getting dirty, then solving mind bending puzzles appeals to many, and being a CT based event, they filled a hole, on a quiet weekend, in a quiet region.

The owners of the event have visited with us at events like Spartan, and worked with other local race directors to get underway – they show all the signs of wanting to do it right, and be a great local event in the future – so this weekend being their first event was going to be their first step into that.

Amy Lillis, team regular lives local to the location, and helped out with both volunteering her time earlier in the week, and on race day, along with racing herself and writing us the featured review – thank you, Amy! (photos courtesy of Grit n Wit’s Facebook page) 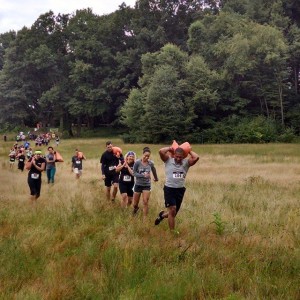 When I first learned that there would be a new obstacle course race held in Hartford, only 15 minutes from my house, I knew I had to be there. Let’s face it, there aren’t a lot of obstacle races held within an hour of Hartford, and even #racelocal events are still a pretty long drive. When I heard that there would be mental challenges as well as standard obstacles, I was definitely intrigued.

The race was held at Keney Park in Hartford, CT. This park is a little gem. It’s in the middle of a really not-so-great neighborhood, which makes getting in and out a little sketchy. There seems to tend to be a lot of trash left by the people who use the park, particularly in the football field and in the woods. However, there’s a great playground, a cute pond with ducks, and the festival area was in a beautiful field. Who knew?

Parking was fairly easy, at a lot behind some buildings across the street. When volunteers were arriving, we immediately knew that we needed more signs to direct people into the park. It took some time, but we got a couple of signs made and they seemed to help. 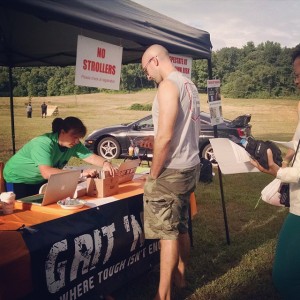 The morning was very chaotic. We arrived at 7:00 and things clearly weren’t ready for the masses. Obstacles were still being completed, registration wasn’t set up, the sound system wasn’t ready, the porta-johns hadn’t arrived yet (!), and the trash cans were just being delivered by the park staff. I mention these things because a lot of this could have been done the day before, which would make for a smoother race day. Scott Sweeney and I jumped in to help in any way we could, but there was a clear need for a volunteer director who knew what needed to be done and where to send people since the race directors, Katie Rosa and Jason Moher, were busy attending to last minute details. Luckily, Katie’s sister Chrissy was there to help move things along in the festival area.

Just at 8:00, the porta johns were set up (cue all women running to them!) and racers began to arrive. Even though it wasn’t my assigned post, I jumped in to help at registration. Things seemed to run fairly smoothly. The Grit ‘n Wit team had been set up to log in new runners and register people on site, but as of 9:15 the internet connection still wasn’t set up. It wasn’t a problem, and the few people who had registered but were not assigned a bib were helped easily. How great it is to have smartphones that can be used to pull up a registration on site? 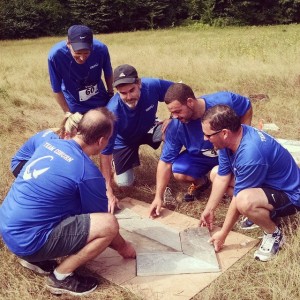 So the main event here is the race. Since this was a first year event, my expectations weren’t set too high. I wasn’t disappointed in the race. There’s a definite highlight/lowlight reel. The highlights for me were the marble maze that was done on the balance beam, the tangram puzzle – there were two options and the puzzle you did depended on how you answered the trivia question – the sandbag carry, the four foot walls, and the well-stocked water station.

There were a couple of really difficult obstacles that deserve an honorable mention. The first is the monkey bars. They were incline/decline – 6 up and 6 down. This didn’t make my highlights because I was too short to get onto them. Another step to make grabbing the first bar a safe maneuver would have made me a happy camper. The other honorable mention would be the ten foot wall. This thing was enormous with no step, no rope, nothing to help get up but your friends. It was possible, but mostly involved two volunteers or fellow racers lifting the person by their feet until they could reach the top and pull themselves over. I wasn’t a huge fan of the drop on the back side, either. I suppose we could include the log carry, too. I like to carry heavy things, but it was part of a trivia question and I still don’t know the correct answer, so just honorable mention for the logs.

The lowlight reel is probably a little bit shorter. The biggest lowlight would be the “get lost in the woods in Hartford” obstacle. We did this one twice and it was completely preventable by having better course markings. There was one puzzle that consisted of small paving stones marked with letters. I’m not sure we did this completely correctly since no volunteer was there when we first arrived, but we made 3 words and moved on. The last was a puzzle that could have been pretty good. It was 8 cinderblocks painted like dice. The goal was to make one row and one column each containing the numbers 1,2,3,4 in order. Unfortunately, the volunteer wasn’t mixing them well enough and was giving too many clues for my preference. 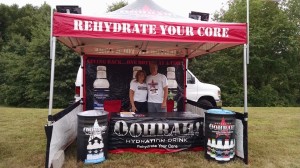 The other issue for me was that that there was no water in the festival area for the racers. While Oorah! Hydration had a bottle of their hydration drink for each racer, it was a sunny day in August and it got pretty warm out there. I found the drink to taste sugary and it really just made my mouth feel sticky. Later, I realized it was possible to buy some water from the food truck, but there should at least be water at the finish.

One major bummer that made things feel just a bit off all day was the lack of fanfare for starts and finishes. There was one start/finish line. The DJ was right there and was playing music announcing the starts; sort of; most of the time. She was just a radio DJ and was pretty good about telling people what to do for the beginning of the race, which was good since there were no signs in the field telling us where to go or what to do. But all she did was give her 30 second spiel and say go ahead. No gun, no GOOOOO!!!, no getting us pumped. When people finished, nobody was there. Nobody cared. Nobody was giving out those sunglasses that were in the box. Nobody was directing us to water or hydration or food. It felt weird and anticlimactic. 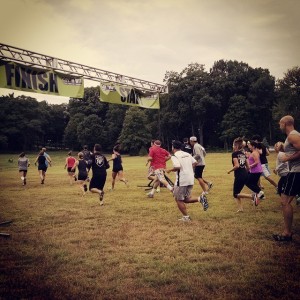 There were a several vendors in the festival area, including 2 food trucks and one ice cream truck. The main sponsor was Oorah! Hydration, who had a tent near the finish line and was giving one free drink per finisher. Half Full Brewery was giving one free beer per participant and also selling beer. Also present were Max Cure Foundation, Energize CT, and Rugged Fitness.

Bling was very simple. One pair of sunglasses per finisher, which were just in a box by the finish line and I’m 100% sure a lot of people went home without. One pint glass for a select few. A really nice, soft t-shirt. The swag bag contained a couple of samples of Banana Boat products, a sample of Speed Stick Deodorant, and a couple of flyers and coupons. 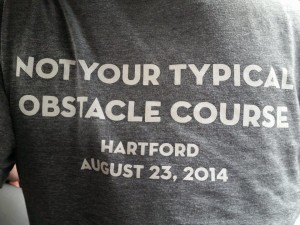 Ideas for improvement:
• Need a pre-runner who doesn’t know the course to be sure the markings are sufficient.
• A volunteer coordinator who knows which jobs need to be filled and can delegate them.
• Things like porta-johns and trash containers delivered the night before so they are available when the first volunteers arrive. DJ set up and ready to go at least 30 minutes before the first heat starts.
• Wit puzzles – need more available and need to be mixed well between racers. If the race grows, they’ll need more sections of monkey bars and tall walls to prevent major back-ups.
• If possible, more volunteers on course.
• Some sort of fanfare for start and finish.

Things that went really well:
• Obstacles were well built and felt solid.
• Wit challenges were something that are different and fun!
• Racers were found to be helping one another.
• Course was a good mix of fields, woods, and paved path. A few hills, but nothing too technical.
• Volunteers were friendly and helpful.
• Plenty of spectator access

While this race certainly has room for improvement, it seems that all of their obstacles are capable of being overcome. For a first event, it seemed like a success and I’d be happy to return next year.