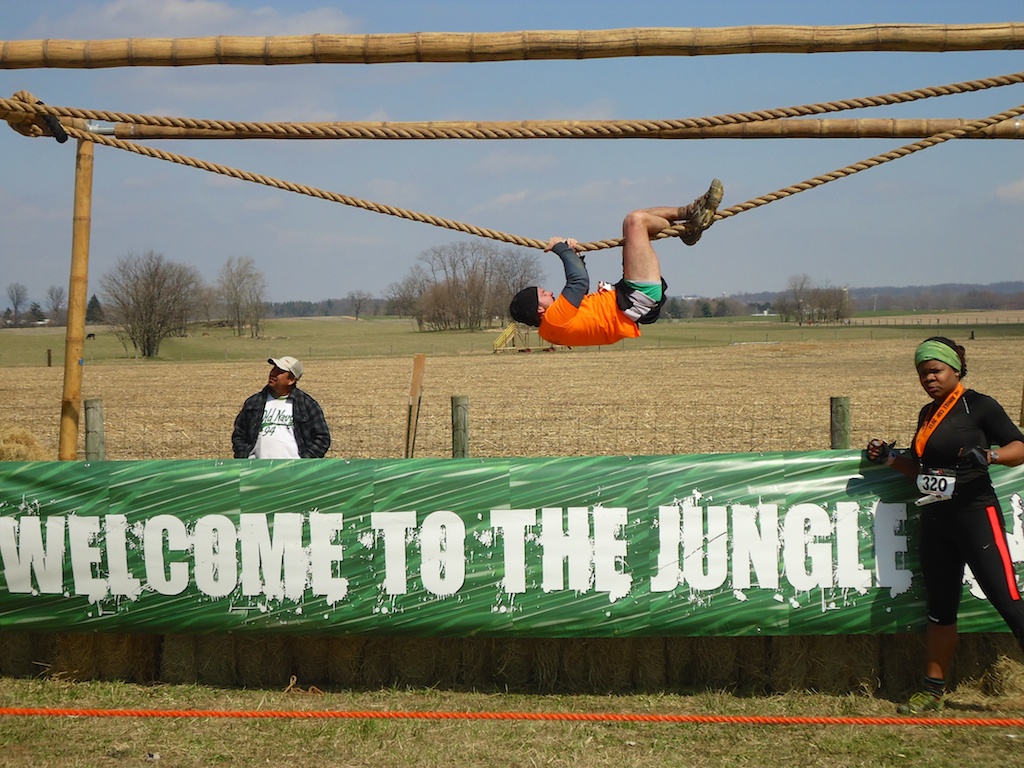 We’re all familiar with Jungle Cup by now – and if not, feel free to read the last post we had on the race series to catch up with the class. Considering our local even is the second of four total events to be canceled, the smart money was that the DC event this weekend wouldn’t happen either.

However, against all the odds, they did manage to put on an event in DC this past weekend. Of course, after Boston was “rescheduled” to a date we’ve yet to learn, we’re all REALLY interested in how DC went.

Happily, a member of the New England Spahten Facebook group was there, and agreed to give us the low down on how it went. Good info to have, considered many of us are still “owed” a race when Boston is put back on the calendar.

Over to Edy Penn

The Jungle Cup advertises itself as “not your typical mud run or average obstacle course race”  it’s a race “for warriors looking for the most challenging obstacle race of their life. Although I am new to the sport of obstacle racing, only having begun in 2012, I can easily say I’d done charity mud runs that were more challenging than this race. Where do I begin?

Directions: The event was to be held at 7612 Willow Road, in Frederick, Maryland. Thanks to an old high school friend who lives in the area, I knew that it was a farm area. But that tidbit of information would have been nice to for the race organizers to share with the participants. It was difficult to find, but we managed. And just in the nick of time.

Arrival: I was scheduled to race at 12:00 and the instructions specified that I should get there at least one hour ahead of time to pick up my packet. Unfortunately, due to massive construction on 95, I arrived at 11:40. I was terrified that I had just spent 4 hours on the road just to get there and not be permitted to run. I went immediately to the registration table to sign in, where, without showing identification, I was able to retrieve my bib number. And despite what had been previously told to the registrants, there was no chip to pick up.

Start: I warmed up as quickly as I could which was difficult because it was cold and I was very short on time. Despite the fact that the registration table was so close to the starting line, when I checked in I noticed there was no one at the starting line. No Official. No runners. So I stood there  jumping around, attempting to keep warm when all of the sudden there were runners there, (some still slowly walking to the start) and an “official.” He made no attempt to corral the 12:00 heat and just began to talk. When I got to the line, I couldn’t hear a word he was saying. I was standing not five feet from him and he couldn’t have been speaking above a whisper. The only instruction I was able to make out was, “I only have time to say follow the green. Good luck. Go!” And we were off….

Course: At the beginning, the course was pretty clearly line with green tape and arrows. It seemed like a fast course with the first 800-1200 yards containing only rickety hurdles. I’m a Spartan, so this was no biggie. I came upon a 12-15 foot incline wall which seemed simple enough. When I reached the top I realized that the other side had a rope we were to go down. The rope was suspended above a single row of four bales of hay under which there was only gravel road. I carefully descended the rope, jumping onto the bales of hay once I got close enough. I noticed however, that this obstacle (which was begging for long, hard falls and broken bones) was not manned by a race official or volunteer. I shrugged it off and moved on. There were only two additional volunteers along the way, but that was all within the first mile. After that, there were no additional volunteers and the course was also not very clearly marked. I got lost. I’m under the impression there were some last minute changes due to the cold weather, and it appeared that they made them so hastily, the clarity of the course suffered. Most of the course was a straight run, the other obstacles (save the “Jungle Jym” right before the finish line) not even worth mentioning.

The Jungle Jym, which was easily viewable by all the spectators, was a nice obstacle, easily the only place there was even a hint of difficulty.  It was the Jungle Cup’s “Gorilla ladder” (incline ladder constructed of 6 or 6 vertical bamboo about 1 1/2 feet apart) immediately followed by a rope swing (over bare ground) to a 5X5 stack of bundled hay. The stack was covered with green plastic cargo netting, allowing for people to climb the stack if they had fallen from the suspended rope. Once atop the stack of hay, there was a rope traverse, immediately followed by gorilla bars. But as great as it was, it occurred 50 yards (if that) before the finish line, itself a low hurdle obstacle.

Finish: As I crossed the finish line, a tiny little girl who couldn’t have been more than 4 years old handed me an orange-ribboned medal. Because there were no time-chips, there was an individual at the table who appeared to simply be writing down the times of the participants as they ran in. There was a computer there, so it’s possible it was a recorded finish. I received my time, but no t-shirt (and you know how we live for those). I walked over to my family, who congratulated me and then it was over. It was 12:35.

In addition to no time-chip or t-shirt,  there didn’t appear to be a Jungle Party or a Kids Course. NO grand fanfare at the beginning or at the end, and honestly, we were all disappointed with the results. I did great (I guess), but it wasn’t worth the trip, nevermind the expense of the registration. I have another race in April, which I am looking forward to and vow to never register for another Jungle Cup.