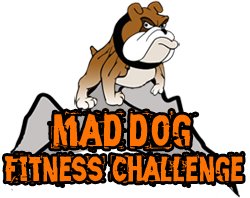 Another race held this weekend – Mad Dog Fitness Challenge was billing itself as an Urban obstacle course in NH, held in conjunction with the local town festival and beer festival. To the RD’s credit, the town had told him to reduce the number of obstacles he put up close to race date – and you can read how much that effected the event thanks to Dennis’ review.

I came across this event after Hero Rush was cancelled. It was relatively close by and price was reasonable. The website claimed the “Toughest 5k Race You’ll Ever Run”. Let’s get this out of the way right up front, it wasn’t, but as I read through the website I didn’t think it would be, so my expectations were not that high. I realize that for some, if you say the toughest, it better be. I guess I’m more forgiving of marketing exaggerations than others. I use what is the potential for fun as my guideline and this event looked like it was going to be fun, and for the most part it was. 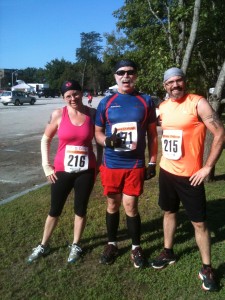 Venue: The start and registration was at the Kiwanis River Front Park in Concord. Less than five minutes from I-93. Parking was plentiful and FREE. Later in the day, parking was still plentiful, just a bit more of a hike. There was also plenty of accessible parking, very important personally. There was also NO charge for spectators. The venue was also canine friendly, although we did not take advantage of this feature this particular time. The race was being held in conjunction with Concord New Hampshire’s Weekend on the Water so there was a lot going on, including a craft beer festival and Dragon Boat races going on throughout the day. There was your nothing out of the ordinary food vendors, live music, a land only “duck” boat tour (bus painted like a duck), and a rock climbing wall. One issue was if there was a medical or emergency tent or presence at the venue, it was not readily apparent. The plan is for this to become an annual event and if it grows it could become very crowded in its present layout, but speaking only for this year plenty of room.

Registration: It was a small event so process was handled quickly. We also were able to change our start times very easily.

Course: The course was set up as an urban obstacle course. In all fairness I should point out that in the weeks leading up to the event the city of Concord required that the race director make drastic changes to the course and number of obstacles that could be placed. Within the first 10-20 yards there were hurdles and a 4-5 ft wall setup. Had the waves been larger this would have caused a major backup but with the wave sizes nothing serious.. It was then just a road course for almost 2 miles that was up a fairly long hill, a short relatively flat section and then down. At the bottom you turned into a small park and the next obstacles were a set of 2- 7ft walls, nothing out of the ordinary, well built and spaced a little close if you were a run and jump type athlete, for me, I’m a climber, this was not an issue. The next obstacle was a burpee station. We can debate if burpees are an obstacle, but considering burpees suck, it’s an obstacle in my book. 25 burpees and then back the way you came immediately uphill after burpees. Uphill, right after burpees, that was tough. It was road course again until you approached the finish area. There was the “Ramp”, not sure how to describe it other than that, and it was an obstacle that I hadn’t done before, then a cargo net to crawl under and a wall to go over. Obstacles were well built and while challenged I did not feel unsafe on any of them.

Swag: Tshirt and towel. The logo would make an AWESOME medal.

After Party: A choice of craft beers. Good craft beers. Didn’t hang out that long, a craft beer festival is not the place to hang out for a long time, if you are driving.

Overall: Needs more obstacles, I understand that this year was a challenge, but it was more a road race with a few obstacles along the way. That being said, I hope it is back next year and unless there is some totally awesome event going on at the same time, I’ll be back.