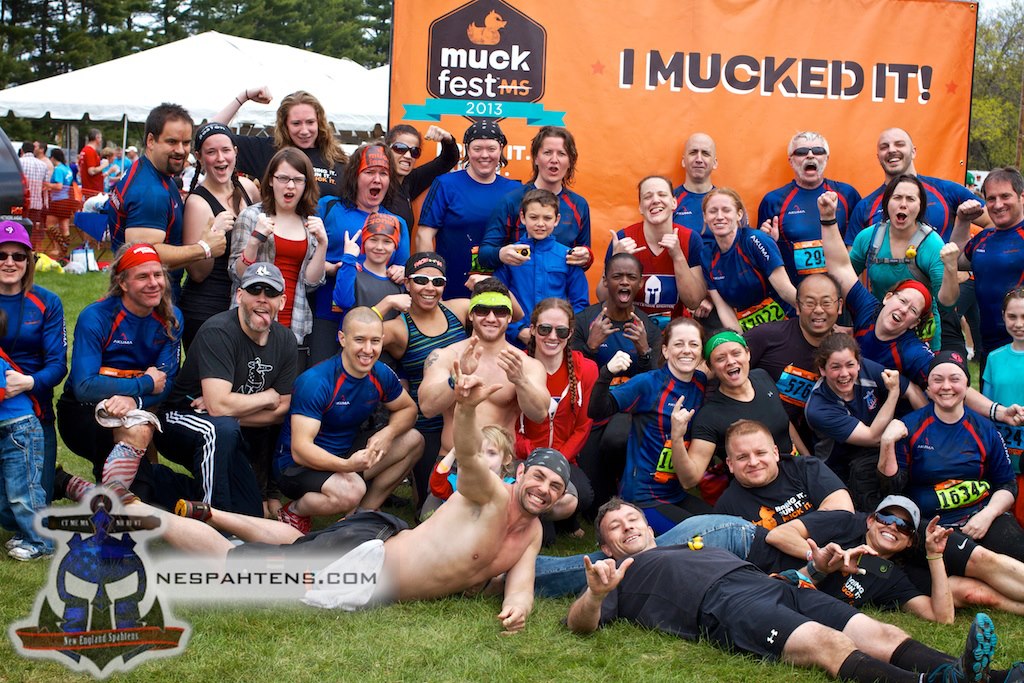 Kandice took on the roll of Race Co-Ordinator for the New England Spahtens, and was put in charge of keeping us organized, pointed in the right direction, and working with the race director along the way – and I can’t thank her enough for her hard work, dedication and efforts. Thanks to her, we were the biggest team, with VIP parking, express check-in and our own tent – she also established a great relationship with the event team behind MuckFest MS, and, she followed through post race by writing our Feature Review.

Rubber Ducky…you’re the one! This wasn’t bath time, but it sure was fun!

I first heard of MuckFest MS through an email from the National MS Society. I knew that it was an event that I wanted to do, having participated in another event run by the MS society, I had confidence that it would be well run. I posted about the event on the New England Spahten page and was immediately joined by Lisa, Jenn and James. Slowly more and more people started joining, I was thinking we would get about 25 people…but our amazing team topped the charts as the largest team at the Boston Event with 48 people, officially registered (while it counted toward the team total) and at least 1-2 others added in couple of days preceding the event. Shout out to you all for being so patient and making the day totally kick ass! The NE Spahtens are also in the top 5 for ALL of the MuckFest MS events, yahoo!

Moving on…the event was held at Ft. Devens, a former military base, easily accessible just off of Rt. 2. Since we were THE LARGEST TEAM we had some perks, including VIP parking, express check in and our own tent with some tables in the festival area. When I arrived the VIP parking was full. We were directed to a lot, that was just as close by, and free! It was a short walk to registration. When we go there there was a decent sized line for registration, that seemed to be moving fairly quickly. Fortunately, we got to go to express check in—pulled out our licenses and were given our bibs and timing chips within seconds of our arrival. We met up with the team, some had run in the competitive heat at 9 am, others were preparing to run at 10:30am and the remainder at 1:30. Since we had such a large team we did split up the heats, which I think worked out fairly well. It seems that everyone was able to run when they wanted to (it was not an issue to jump heats either…shh!).

The course was a blast!!! There were about 30 obstacles scattered over the 5 mile distance. There were familiar obstacles…cargo nets, tubes to crawl through, spider web, traverse wall, muddy trenches, slip n’ slide, traverse ropes, teeter totters, fire poles, etc.

There were numerous new (at least to me) and super FUN obstacles!

Swinging big balls : the orb style inflatable balls that were hung from cranes that you had to dodge
The Spinner: had large steel arms with a long and short rope hanging from them, grab the rope and take a ride over the mucky water…or fall in and walk through (I fell, both times)
Muck Off : Climb up a platform and jump into a man made “pool” filled with cold water
Swings: Self propelled swings that you jumped off of into, yet again, cold water

The course had a great lay out, obstacles were well spaced throughout. Obstacles were built well and at no time did I feel unsafe. There were some decent hills, some flat areas and mixed terrain (trails, grass, and pavement). There were at least four water stations and a couple port-a-potties along the course. There were many volunteers that were very friendly, encouraging and thankful for our support.

The first heat I ran there was no bottle necking, we made it through without any significant wait at any obstacle. The second time around, we started a bit further back in the pack, we did have to wait at a few of the obstacles, but not more than a minute or two for any of them.

Course Cons: Though there was plenty of (cold) water and amazing obstacles there was not quite enough mud! Additionally, there was a “short cut” that took 2 miles off the course…there was no indication of who ran what distance, so the times/places are off a bit. I wasn’t running competitively, so not as much of a concern for me. Alternately, this was a great option for those who were unable to complete the full 5(ish) miles, but wanted to go out and show their support for MS.

Included in the registration fee, each racer got a t-shirt, two beers and some food (sandwiches, wraps, chips). There were also vendors giving away free unlimited Hint water and coconut water, t-shirts, stickers, water bottles, etc. In the festival area there was food and beer for purchase. There was good music, smiling faces and an overall chill environment.
Festival cons: Some of the music had explicit lyrics (only an issue because there were a lot of kids there). The festival area was a bit small, not an issue for us, as we had a designated tent 🙂 (Have I mentioned how incredible the NE Spahtens are!?)

There was a bar code scanner, for smart phones, in which you could look up your time, place, etc immediately after finishing. The timing chip was also connected to the photos. Scan the barcode (or go to the website) type in your name or race number and voila, its all there! The photos were posted within 48 hours of the event. Cons: There were not many photos taken by the race photographers.
Never fear, we have Vince Rhee and Paul Jones looking out and snapping photos of us. Thanks guys, you truly rock!

Overall, this was probably the most fun I have ever had doing an OCR. I was certain that I smiled the entire day, that is until I saw the photos of my on the platform of the Muck Off, my face clearly indicates that I was thinking WTF, only to be followed by my mid air shot with a look of pure terror!!! With the exception of those 30 seconds, I was definitely grinning ear to ear for the vast majority of the day. This is not necessarily a challenging or competitive OCR (though there was a competitive wave) but the distance and assortment of obstacles made it suitable for nearly everyone.

The event was so well run. The obstacles were great. The distance was perfect. The festival was fun! I haven’t heard many complaints about the course, obstacles or festival (other than the short cut issue and explicit lyrics). It seems that everyone is looking forward to running it again next year, I know for sure that I am! I am very pleased with how the day turned out. Truly, it was an incredible event for a great cause.

**Just wanted to send a shout out to Samantha Williams from MuckFest MS. She was my contact person, numerous emails, phone calls, etc went into getting everyone situated on the team, arranging and rearranging the heats, etc. She answered all my questions and hooked us up as best she could. Thanks Samantha, it was a pleasure to work with you. 🙂