Michael Carr took on the duty of writing us a review for MuckFestMS 2015 – Michael has run multiple MuckFest’s and many *many* other events, from fun runs to GoRucks to endurance races – always smiling, always helping others, I can’t thank him enough for taking this duty on for the community!

As the OCR industry continues to expand, we have seen many niches form. The upside to this is that it helps grow the overall sport by reaching different types of people with different interests, abilities, and goals. For the ultra-elite athlete looking to see where they measure up to their peers, we have the OCR World Championship race, and those that lead up to it. For the obstacle hungry, we have courses like Shale Hill and BoldrDash, which feature a very high obstacle per mile density. We have themed races featuring zombies. We have winter races. We even have color runs and foam runs, on the fringe of this industry.

And then we have MuckFest. Where does it fit? Well, first, keep in mind that 100% of the proceeds go to charity (specifically, the Multiple Sclerosis Foundation). Second, know that it is not a timed race. There is no podium, no placement, no timing chips. Also, the obstacles, for most of us seasoned “hard-core” OCR athletes, are not particularly challenging. For their target demographic, however, they may be the hardest thing these people have ever done. The bottom line is MuckFest is a “fun run”, in the mud, with some really fun obstacles. If you go into it with that mindset, it is very hard not to have a blast at this race. Judging by the muddy smiles at the finish line and folks swapping stories at the beer tent, they succeeded big time, for the third year in a row.

Let’s start with the operation and venue. For the third year in a row, MuckFest Boston has been hosted at Ft. Devens, a perfect spot for a race like this. Some short hills and backwoods trail running immediately take most people that sign up for this race out of their element. Onsite parking is free and plentiful, and in no case more than 1/4-mile walk from the start. Registration is a breeze, with plenty of lanes for racers. Ample porta-potties, huge mens and womens changing tent, a merch tent, a beer & food area, and hose-type showers were all present in the infield festival area. At the 1.5-mi mark were more porta-potties and a water station. Security & staff were clearly present and visible, and there were always volunteers at every obstacle. Like most OCRs today, people were sent out in waves, every 30 minutes. Some logjam may have been prevented by using 15-minute intervals (more on this later). The start line MC was great — not the same rah-rah, testosterone pumping delivery as the well know Tough Mudder front man, but definitely more fun, and keeping in the spirit of this particular event. 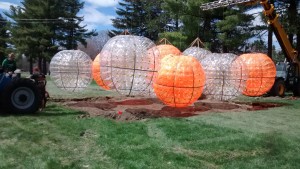 Now a little about the race itself. After the hounds are released, we immediately ran through a rain stream, so you start off out of the gate wet. It’s really fun watching the reaction of newcomers to the sport who have no idea what they are in for. Next up, a series of four muddy up and overs, each one higher than the next. A short run from there, still in the infield area visible to all guests and supporters, is one of their signature obstacles: Big Balls. Going through alone is a no challenge at all. Going through while the other 200 people in your wave are pushing and shoving their way through at the same time is surprisingly difficult. And again, listening to the laughs, giggles, and screams is just the beginning. Up next just a short distance away (still within 3-4 minutes of the start) is the first backup: the 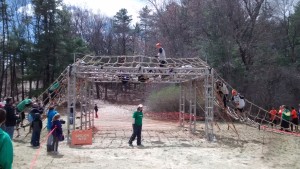 Spider Web. A take on the traditional barbed wire crawl, made with bungies. The idea is to weave between the ankle high cords and the belly-button high cords. But as 200 other participants crowd into this, it basically just turns into everyone stepping over all the cords, pushing them to the ground with each step. With 3-4 people entering this obstacle, it is challenging and passable. With the mass that descended upon it because it is so close to the start, it is impossible to do as intended. Once through, it’s a third-mile mostly uphill run to the first water obstacle, just a simple pit dug into the ground, lined with tarp, and filled with water — waist-deep water. Up and over a big mound, 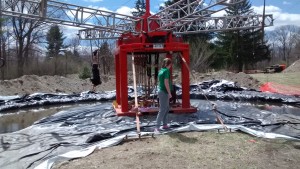 and more running. To the next signature obstacle, the Ring Swing — a rotating structure over a moat. This year, they replaced the ropes with gymnastic rings. This greatly improved the success rate over the last two years. Racers grabbed onto a ring and hung on as it spun (slowly) around in a circle, dropping them off 270deg later. After this a short run along the street and back into the woods, and the next obstacle, a twist on last year’s high-low rope traverse. This year, they added another set of ropes running perpendicular. Not only did this improve flow and prevent additional backup, it added a little more challenge to the obstacle, as you had to contend with another racer crossing your path. 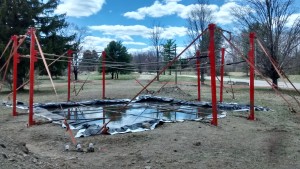 Another short run, and onto their newest obstacle, one that this racer has never seen at any race: a zip-line over a 8′ water pit. And the zip-line ended before the edge of the pit, so no matter how skillfully you handled the zip-line, you were dropping into the muck. Continuing on, shortly ahead is a favorite from previous races, the Swing Set. Stand on a giant swing and try to build up as much momentum to launch yourself as far into the water pit as possible. Regardless, you still going in up to your head and swimming out. After another short run, a new obstacle that was

really challening, the Balance Bridge. Even if you are able to keep your balance and cross without falling in, the volunteers are at the controls of water cannons that will surely get you wet (and possibly disrupt your balance). After that, anoter twist on the familiar corrugated tubes: on rollers. As you crawl through the tubes, volunteers rotate them — sometimes with great enthusiasm! This was actually one of the hardest obstacles. Next up: a platform jump into a deep water pit. Not nearly as 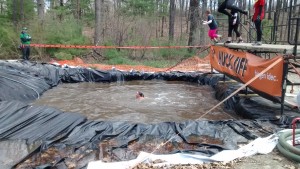 high as Tough Mudder’s Leap of Faith, but not everyone is looking for the TM experience. Coming out of the woods and back into the infield area, the next obstacle is actually the Spider-Web station, serving double duty, as a cargo net up-across-down. This was a pretty big logjam, due to the volunteers only allowing 5 climbers at a time. This was a big change over the last 2 years, in which there wasn’t really a volunteer “controlling” the station. There were 20-30 people on that obstacle at a time last year. They were certainly erring on the side of safety and caution this year. A few people grumbled about the long wait, but most people (again, keeping the target demographic in mind) were just taking the opportunity the catch their breath and share some laughs. 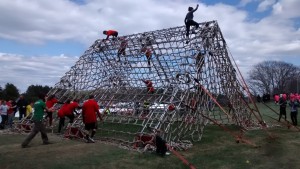 Right after that, was another cargo net obstacle, a simple (but very high) A-frame. Then on to a long grass out-and back run to another brand new obstacle, a giant air bag, and racer’s choice of low or high platform off of which to jump. Here too, was a significant backup at certain times of the day. Finally, the last two obstacles immediately before the finish, both extremely muddy: Skid Mark and Belly Crawl .

On this specific day (Saturday), temps were in the low-40s at the start, and rose to mid-50s in the early afternoon. Overnight had been upper-30s, so you can believe that the water obstacles were very cold, especially in the first few waves. The water warmed up significantly by noon, and really 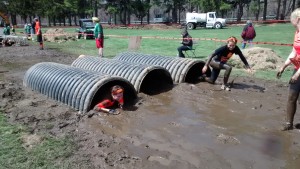 wasn’t bad at all. Most people were shocked at first, gasped maybe, caught their breath, and just moved on, warming up by running. At the end, most people spoke of it as a badge of honor, having endured something they don’t normally do in the normal lives. Your registration got you a free event-specific t-shirt, a beer, a snack bag, a really neat orange MuckFest cup (ed: this was due to being on a team of more than 10!), and a food voucher. Also in the infield area were games for adults and kids, such as a “log roll” in a raised pool, and there was also a “kid’s race” (which the writer knows nothing about).

So, all in all, the vast majority of people this writer saw and talked to during and after the race had a great time. It is true that this race would not challenge many of our elite athletes to their limits, and may not appeal to everyone, but, it certainly succeeded in appealing to their target audience. Looking around, most people were part of a small-to-medium sized team, each with unique team-specific shirts made just for this event. Participants really put a lot of time and effort (e.g., fund-raising) into this event, which is readily seen. The event was sold-out for Saturday, and nearly at capacity on Sunday as well, so they are clearly doing something right. So if beating your PR time is your goal, consider a Spartan Sprint, but if having a really fun time with a group of friends, and doing it all in the name of a really great cause, this race is a no-brainer.