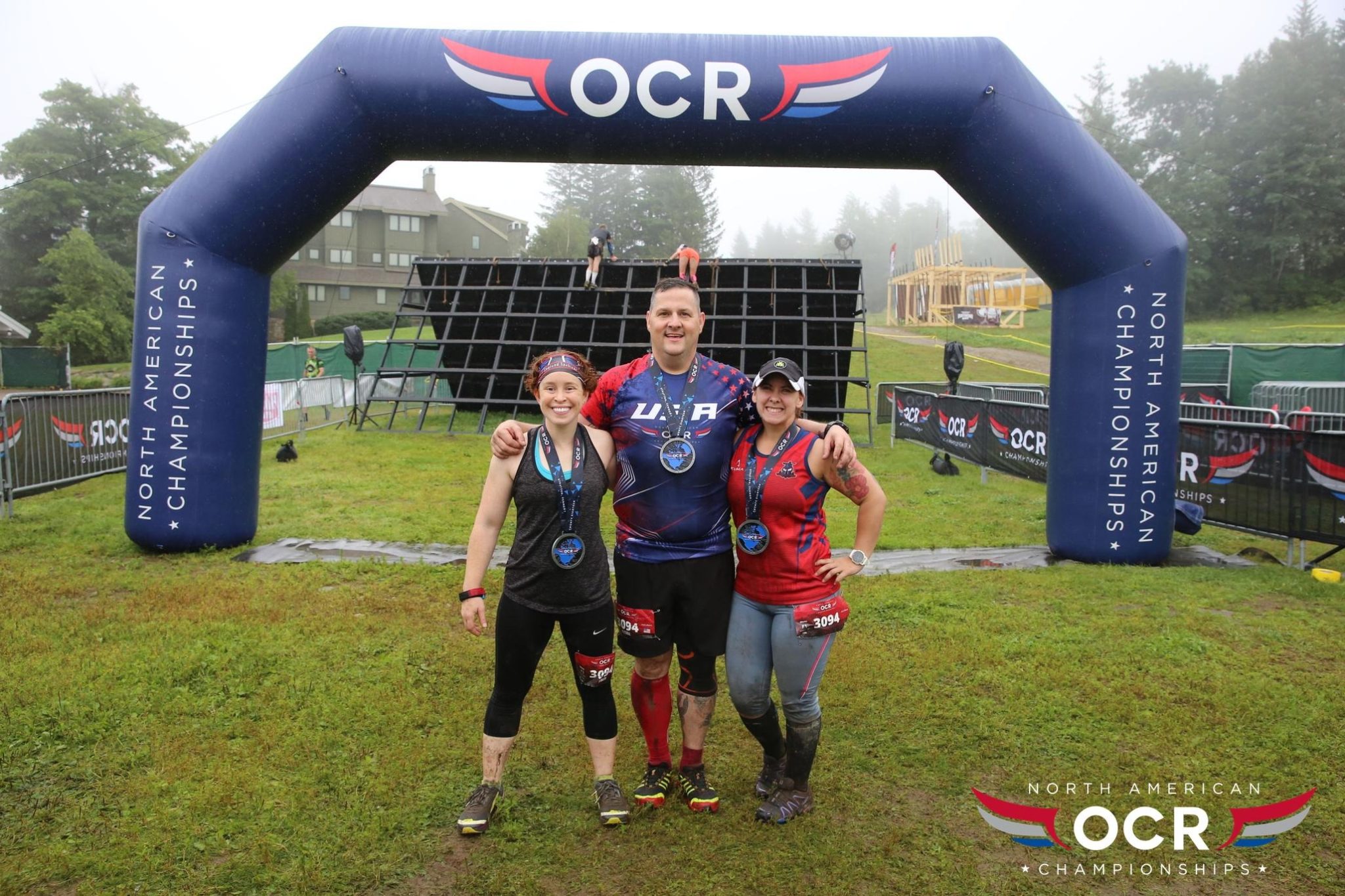 The last day of the North American OCR Championships featured two events, the Team Relay and the Charity Open 7K to benefit the Stratton Foundation. My team from OCR World Championships, Tiny^2 + 1, had once again joined forces for the team race at NorAm. Niki and Steve were good teammates from the Spahtens and excellent friends to do the team run with because we all were on the same page — camaraderie over competitiveness. After two days of racing, we weren’t “in it to win it” for the team relay. We wanted to each do our best and have a good time.

Sunday morning, I woke up to an extremely sore body. I didn’t want to move, much less run another obstacle course race. Additionally, the wet weather from the previous day had continued overnight. The rain was unabated. In a way this was a blessing; I had no notions that I would be competitive on my section of the team relay in the wet. I could focus, instead, on having fun. I find three day of sustained heavy competition to be too much for me, both physically and mentally. I like to race on Sunday at NorAm or OCRWC, but it has to be more a “fun time.”

The team race at the championship races, like NorAm and OCRWC, is designed for teams of three, where individuals can specialize in the areas of speed/endurance, strength, and technical. The speed/endurance section is the longest, and focuses on running and climbing the mountain. The racer tackling the strength portion of the relay will be doing the heavy carries and the hoists. The technical person is the obstacle specialist and does the rigs. For our team, Niki would handle speed, Steve would manage strength, and I would do technical. 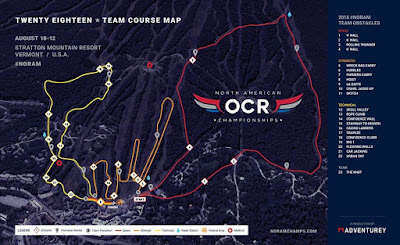 After feedback last year about the strength section, it had gotten beefed up for NorAm. There were even some technical elements — La Gaffe and Skitch — , an interesting choice, and a band cutter, considering the rain. Speed was left the most obstacle “lite” though a last minute change made runners have to tackle Dragon’s Back on the speed course, instead of Rolling Thunder. This was a challenging adjustment for sure and made me supremely happy I was not doing the speed section. The technical portion of the course, covered a little over 3K and incorporated many of the obstacles from the 3K course from Friday.

Tiny^2 + 1 was part of the mixed open wave that started at 10:15 a.m. There was light rain as we headed off to the starting line to see Niki off on course. I knew that Niki would be out for around an hour, since she had some significant elevation to cover, and Steve would be out for around 40 minutes. That meant I had plenty of time to hang out before my turn came. While Niki ran, I spent time relaxing in the athlete lounge, basically an empty (but quiet!) room. I wanted to keep warm. It was raining and in the low 60s, which was fine if you were moving, but rough if you were hanging out in just a hoodie for a few hours.

After about 50 minutes, I headed out to the transition area to wait for Niki with Steve. At around 11:40 a.m., Niki arrived, having spent quite a while trying to keep her band at Dragon’s Back, with the weather causing the challenge and, ultimately, making it not a possibility that day.

Steve was off, so Niki and I went in so I could check my bag. Steve’s portion of the race featured an endless Wreckbag climb and the farmers carry, which was all pretty easy to see from the main area, so we were able to track his progress. The rain made La Gaffe impossible — I saw almost no one make it during my wait there — so Steve moved on. I knew he just had Skitch and then it was my turn. I headed out at 12:25 p.m.

I was cold and stiff. My arms and quads were killing me but I made myself move at a light jog. It helped. The first obstacle was Skull Valley. Going into the technical section of the team relay I knew I would not keep my band. It was a function of the weather but also because Stairway to Heaven was on course. I had lost my band there during the 15K before it rained. I had no hope today. That might have been discouraging, but, in fact, for the Sunday race it was liberating. I could have fun and try my best. My arms could barely move, so I would do what I could do — no problem.

With this strategy, I climbed up to Skull Valley. I grasped the skulls and moved along. What had been easy enough on Friday with fresh arms felt like torture, as if my arms were being pulled out of my body. During the monkey bars I decided to give up my band here. I wanted to do it on my terms and not lose two to Stairway to Heaven.

Even though I had given up my band, I wanted to put in a solid race. I did the full rope climb, and made it over the Confidence Wall, where you had to climb a 12′ wall with a rope. Both of these obstacles were slippery in the rain and no joke as a result.

The course then took racers uphill to Stairway. I had thought the climb would be lengthier, like the section of the 15K that brought us to Stairway, but it was a short hike, necessitating only a brief bit of walking. I was determined to run and move along at a decent speed. I cut my losses at Stairway before moving on to the metal ladders. I like to do skinny ladder climbs like this sideways because it uses way less arm strength. It worked like a charm here.

I ran down the hill to trapeze. Just like Saturday, it was soaking wet. I made it about 3/4 of the way through before slipping off. I did a quick ladder wall before running over to the rig with the rings and low monkey bars from the 3K course. I noticed that some adjustments had been made. There were two hanging rings for you to step in under the monkey bars and a t-bar replaced the third ring on the first set of the rig. This meant, there was a section with two rings, a small ball (which you could skip) and a t-grip. Then there was a section with rings hanging below the low monkey bars, and finally there was the section with four ropes, unaltered from earlier races. I was excited to try something new at this point in the weekend — it was a nice mix-up for the mind, plus, I was approaching this from a “have fun” standpoint. I made a couple of attempts and kept slipping off the t-shaped bar, but I wanted to keep at it. If I got past that point, I thought I could do it. I persisted and managed to make it to the low monkey bars. I “walked” through, getting to the first rope, which I s-hooked around my foot and stood up. I transitioned to the next rope, where there was a knot. My arms were tired, so I took the opportunity to sit on the knot for a little and regroup before finishing the rig. Excellent! 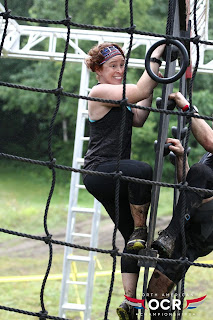 There were just a few obstacles left. I ran down to the floating walls and quickly made my way through. Urban Sky proved too much for me at this point in the weekend, and I could only make the first section. I ran on. My teammates were waiting right beyond the car obstacle. We met up and raced over to the final slip wall, The Knot. The wall was so slick at this point, I couldn’t even make it to the rope (which had, of course, been raised so that it was harder to reach). Steve ended up helping me and Niki make it to the top before heading up himself solo — nicely done, sir! We crossed the line at just around 1:10 p.m. 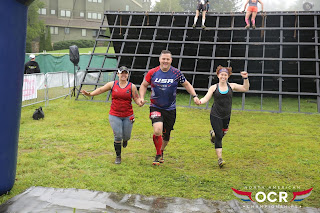 There was little time to celebrate before the charity run. Technically, the charity 7K started at 1:00 p.m., which was the time that Steve and I had registered for; however, we were promised that we could go off after that — they would release waves every 20 minutes. We grabbed our chips and bibs and headed back to the starting line. There was no one there, and the rain was coming down. It was 1:20 p.m., so we headed out on course. 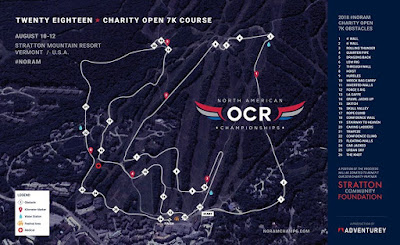 Much like at OCRWC, the charity run was a do-as-you-like fun run for us. We had covered over a half marathon’s worth of miles over the past few days, and another 7K, with a trip up the mountain wasn’t happening. Most of the charity runners I saw felt the same. This was an opportunity to play as we liked on obstacles and meander around the course.

Steve and I headed out, running into a band of other NE Spahtens mid-way. We walked with them for a while, tackling the inverted wall and watching people play on the Force 5 Rig before heading out on our own again. We goofed around on La Gaffe, which was way too wet to do anything serious on and then walked over to the rig that had been modified for the team relay. There, we ran into Josh and Molly. After playing around on the rig for a few minutes, we jogged to the finish line, having run just over a mile and spending around 35 minutes on course.

I love that the charity open exists for those individuals who are at NorAm with family and don’t want to tackle the full 15K or didn’t qualify. For those of us who are on day three of racing, it’s a fun way to donate some money to charity and have one last good time with friends. Rain and a desire for lunch kept my frolicking short, and that was just right. A nice cap to the weekend. 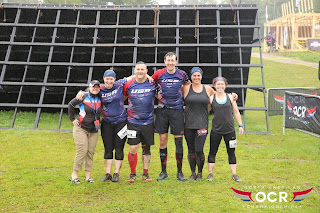 NorAm was a blast. I loved the course, which was world-class. I appreciated that it was a smaller event than OCRWC. NorAm felt more intimate and was much less stressful to navigate. Completing the 3K with my band was the culmination of almost a year of training. The progress I showed with my physical and mental strength on the 15K was encouraging and makes me want to work for next year. Running with friends during the team relay and the charity open event were a wonderful finish to a weekend spent with some pretty cool folks doing something I love.

NorAm at Stratton was the highlight of a great race season. I am super super super hoping that NorAm is at Stratton again. I thought it was a good venue (minus the pricey food — but parking was great, the mountain excellent, and lodging adequate). The course layout couldn’t have been better; even though we all hate a “death march,” the one on the 15K was at least reasonable. I was so pleased about the adjustments made so that the course was height accessible, that I ran over to race director, Adrian, when I saw him at the venue to personally thank him. In sum, NorAm delivered.

What’s next? The countdown to hear about the 2019 location for NorAm, figuring out where to make my qualification attempt (F.I.T. in November?), and then training for the big event. I hope to see you at the 2019 NorAm Champs!