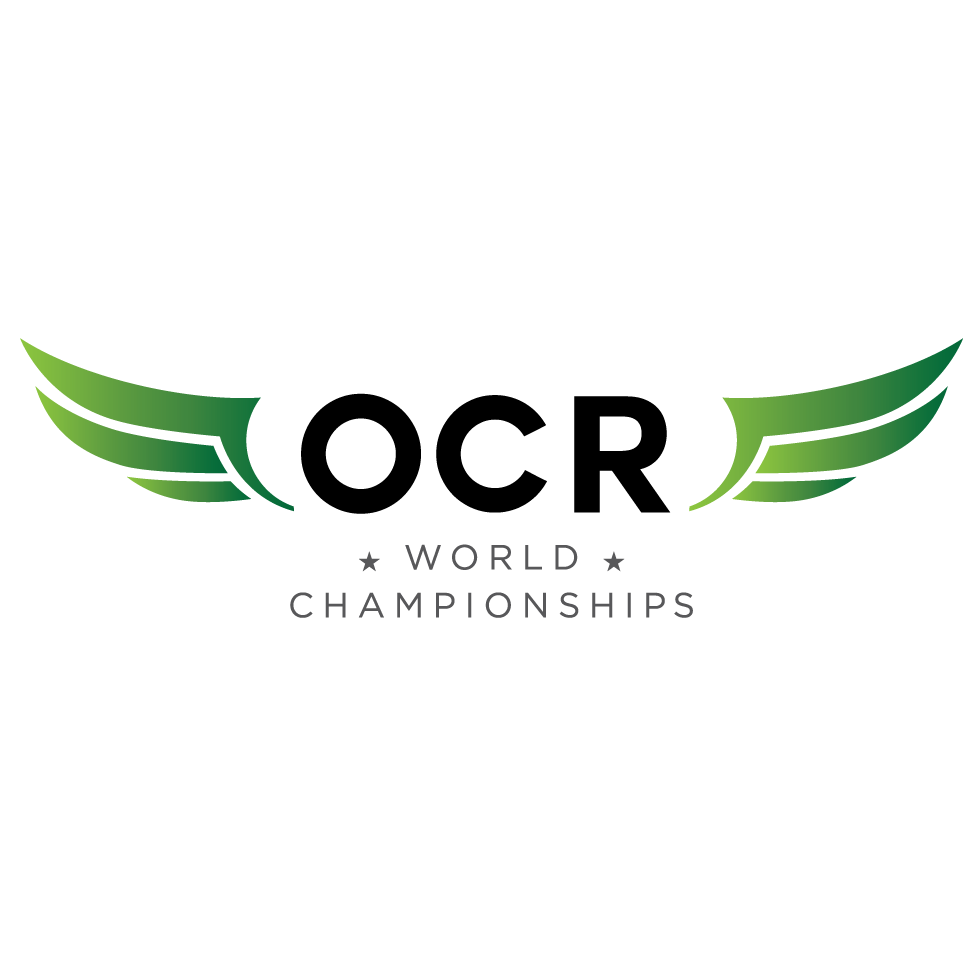 I think it was January this year, when I first heard about OCR World Championship. I wasn’t really impressed, and thought we had a company setup to do nothing but grab a chunk of the market … they claimed they would be independent, and would work with other races in a productive manner. I thought they were crazy, and suspected their motives lay more in making money than in furthering the sport.

I’m so happy to report I was wrong.

This will be a long one. Take a pee break and get a cup of coffee.

First – who was this race for?

If you are an OCR enthusiast. Someone who considers OCR “their sport” – regardless of how you place at it. This race was for you. If you just do one Spartan a year, and road run the rest, or Crossfit, or whatever – this event wasn’t for you. This was truly a race for the enthusiast.

OCRWC was held at Kings Domain in Ohio. Also the venue of fixed location event series, Mud Guts and Glory. I hadn’t really travelled this far for an OCR before, but with a work trip right afterwards, and a loving and supportive wife, I was able to make the logistics work and participate in the first event of it’s kind. 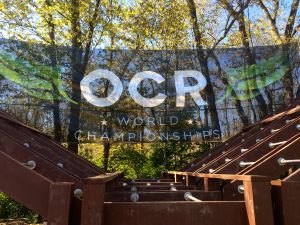 What makes a world championship *the* world championship? Prior to this weekend, we didn’t know. Spartan have their own, of course. We’re all familiar with the brutal slogfest that is Killington. Tough Mudder has their 24 hour World Toughest Mudder – another crazy endurance event. Neither of these are really OCR though. They are both endurance events with obstacles – no doubt – but the elite level of athlete podiuming these is a special breed, and they don’t really represent the thing we do every weekend. Even friendly Warrior Dash just put big money on the line to crown their own world championship – with the winners having very little OCR experience, they put on a true runners course and OCR elites faired relatively poorly.

Enter OCRWC. They turned the venue into an 8.8 mile course and they put on a TRUE obstacle course. One that featured pretty much everything we love about the sport. From technical and challenging terrain, to unique obstacles, to strength based challenges and fear based challenges. Crossing the finish line of this event reminded me why I love this sport, in a way I’ve not felt in a while. I fear it may have spoiled me …

Before I talk about my personal experience, lets talk about what this was and why it worked.

Athlete registration was taken care of on Friday night. Picking up our bib, our “completion” bracelet and our timing chip. Athlete briefing was being run on the hour, and explained the rules and regulations for the course and obstacles. 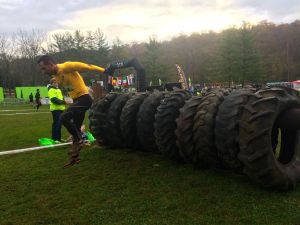 The venue provided ample spectator viewing. They got in for free, and could see tons of things – from saw tooth monkey bars, to 30′ ladder walls, the Platinum Rig and the 220′ water slide. Of course, the start and finish, and several more obstacles from the beginning and end of the course – all easy to see, easy to hang out at. Popup tents were welcome and vendors not charged a penny to be there.

They had plenty of vendors too – good, healthy food options from local food trucks, tents from visiting international teams and local communities, the ORM tent, and a well stocked merchandise tent, with X-Racewear and Icebug gear, and a Wreck Bag tent next to the beer tent.

Icebug played a major sponsorship roll, with banners and co-branded shirts, shoes being vended – and it was nice to catch up with the man from behind the company and get some insight into what they see for OCR. It was also nice to see OCR companies getting behind OCRWC, cementing it’s viewpoint that it was an independent race series – BattleFrog had a huge presence, with New England favorite BoneFrog proving their own obstacle, and ABF MudRun providing some obstacle challenges too. With Shale Hill and Atlas Race putting some teams and athletes together – representation from the community was good – but should have been better. 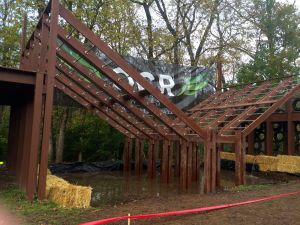 Shame on any OCR series offered space that didn’t take it! The OCR industry is only hurt by fragmentation and in fighting, and with Spartan Race choosing to hold their triple crown series the same weekend, it left the door wide open for “the little guys” to get in there, work together, and show them how it’s done. As it stands, this was left to a much smaller number of races than it should, and everyone who was there this weekend knows who represented – and who did not. Missed opportunity.

For once, the elite competition was taken seriously. Athlete briefing explained the rules and regulations.

To win prize money, you had to finish with your bracelet. Obstacle completion was mandatory, and if you failed out, you had your bracelet removed by a trained official – who then radio’d your bib number down to base camp. Well handled, well organized. Every failed obstacle also levied a 4min time penalty – meaning it always worth trying, even if you didn’t think you would make it. I saw athletes try obstacles for tens of minutes – in one case, completing the obstacle on her 12th attempt. She almost podiumed. Tenacity was key! 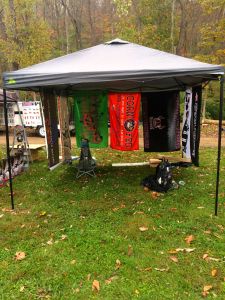 The briefing also covered another huge point – this was a “carry in, carry out” rule. Dumping your gu’s or packets on the trails was ground for DQ. Thank you! Outside of aid stations, when cups were spilling out of the trash bags, but contained to a small zone – the course was clean and beautiful.

It’s hard to understate how huge this ruling and time penalty was for the elite game – it turned what could have been a straight forward run from start to finish into an obstacle challenge. It wasn’t enough to run fast – there were lots of fast runners who didn’t place – you also had to be able to do saw tooth monkey bars, Platinum Rigs, gut checks, weavers, walls, crawls and lots lots more … lose that band on an obstacle failure and you weren’t winning any cash. With enforcement of the rules being strong, random drug testing and dummy runners on the course to look out for mid-race cheating (intentional or otherwise) – this truly was given the respect it needed.

Waves were sent out well spaced and kept small in numbers – there wasn’t a single report of bottle necking or backlogging on the course. Elites first, then age groupers based on expected speed – fasted sent out first.

Everything was professionally handled, well explained and clear. There was no room for confusion, no “poor form” penalties to debate about, and it was great to hear so many international accents from the UK, Oz, Sweden (who were amazing!) and more. Truly, a WORLD Championship. 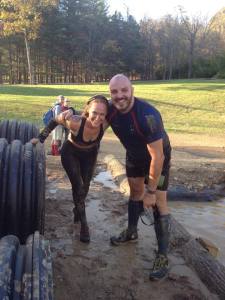 So, how about my race? 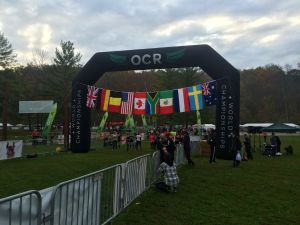 I was entered in the Journeyman category – qualifying by right of running a bucket load of participating races in 2014. From Shale Hill to CMC to Viking Challenge. The journeyman category was the last wave at 12:50pm. I buddied up with Rachelleanne of Team Sisu, figuring that between her 5’1″ stature and my 6′ stature, we could take on the world. I’m not even going to TRY and do an obstacle break down – I’ll let the GoPro’s and course map do that for me later – instead:

We were launched by Coach Pain Dewayne – we’ve met him before at Spartan’s and BattleFrogs and he knows how to work and pump a crowd. After a few minutes with him, a canon blast launched our wave.

Crawls were over technical terrain, but never gratuitously rocky and unbearable – thank you! My knees are sick to death of being sliced open because someone thought rocks were a better option than grass or sand. We had long crawls, short crawls, barbed wire crawls, crawls under tires, tunnel crawls and a normandy jack crawl from BoneFrog. 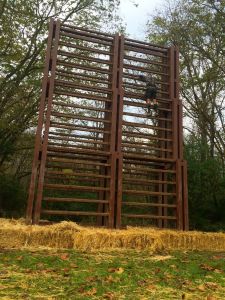 Walls were plentiful, ranging from 4′ hoppers to 10′ with step boards. Inverted walls from ABF Mud Run and traverse walls (“Tip of the Spear”) from BattleFrog. One of the biggest ladder walls (easily 30′) I’ve ever seen!

The terrain was challenging, with plenty of creek bed running, grassy trail running and steep hill running. Some of the uphills and downhills NEEDED the ropes they provided, one in particular being incredibly hairy – genuinely giving me a “what if I slip?” moment!

There were plenty of hanging obstacles too – a regular, straight monkey bar that I nailed. A huge inverted V monkey bar that cost me my bracelet, the Platinum Rig that had a massive failure rate – especially in the female crowd – and had to be dialed down for Sunday’s team racing. Two tyrolean’s – one over two lengths of rope, another on a pipe. A rope climb that I nailed – but still got penalized for because the bell didn’t ring – I touched it! I swear! Judges decision is final and I was welcome to go back up and do it again … I took the 4 minutes 🙂 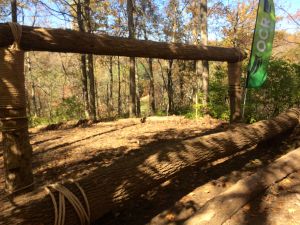 Unique obstacles – the high wire traverse was hairy! Crossing a deep deep gorge over a wire (one to stand, one to hold) was pretty nerve wracking. Two Sternum Checks (known as Gut Check to the Shale Hill crew) that I was able to nail and a Weaver (known as The Loom – -minus the rope part) that took me out. A MASSIVE slide. 220′ massive. This was truly the one obstacle I was scared of – ever since SHS 2013, slides have genuinely given me cause for concern.

We carried a bunch too – two Wreck Bag carries at 50lbs each, a pre-filled, sealed and weighed 60lb bucket carry with no handles, a double tire carry over some technical ground – this never felt gratuitous or over the top, and the terrain was always respectable, but not crazy. 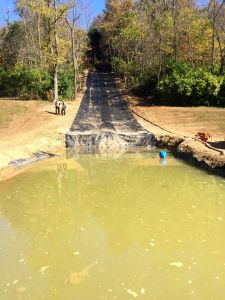 We started the race at one end of the festival and coursed through the grounds more than a few times – before a final loop back in the festival with people cheering us on and the finish line MC, Brett Stewart announcing each finisher by name for an amazing and personal touch.

Crossing the line saw Adrian, the man behind the whole thing with a huge beam on his face, putting that medal on my neck and immediately asking for feedback (my immediate feedback was “is the beer tent still open?”). It took me a long time to get through that course, and it left me scraped up and bruised up and PROUD that I was able to be at the first. 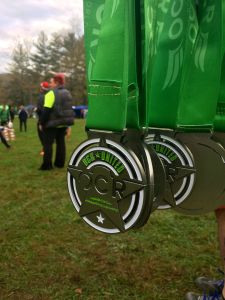 The Platinum Rig was too hard on Saturday, simply put. This was acknowledged and adjusted quickly, but leaving the Rig crew to setup their own obstacle with no guidance was a slip up.
By the time I crossed the line, there were no more XL mens finishers shirts, and that blew. The crew has committed to getting them out to us early next week.
Running in the last wave of the day, I don’t believe I saw a single professional photographer on the course – and I’m usually pretty good (read: camera whore) at spotting them. I haven’t seen the final photos yet, so hopefully I’m wrong on that!

But, if these are my only complaints – they are minor complains indeed, and fairly common to first time races. Easily fixed and immediately handled. 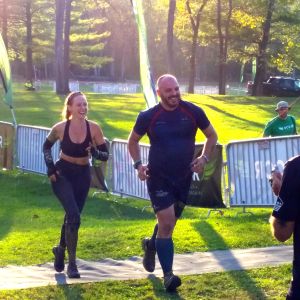 I regret not being able to stick around for the team competition (which was free), but even if I hadn’t had to hop on a flight, I’d have likely skipped going back out again!

We had a lot of expectations for OCRWC, and I believe the crew behind the weekend exceeded them, and then some. My hat is off to them. I hope they have as much success in 2015.