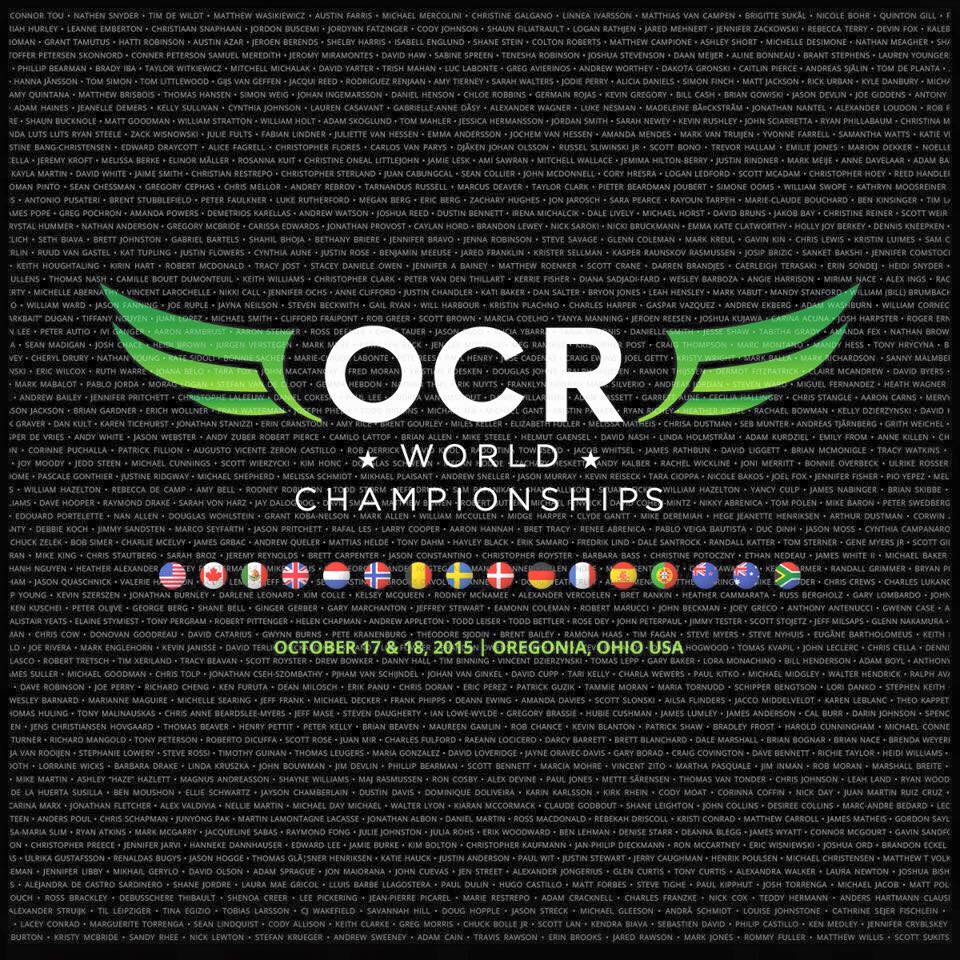 Here we go again. This is another post where I tell you all about another awesome race, that you should go to, and spend a lot of money on, and you can all yell at me for it later.

Except, this one is different.

For the unaware – OCR World Championship is a “brand independent” world championship event. This was it’s second year, and it was held in Ohio – although rumor points to it moving for 2016. Brand independent means simply, it’s not held by Spartan, or Warrior Dash, or any other event organizer – OCR World Championships exists for one reason – to hold this annual meeting of the best of the OCR pros, elites and enthusiasts in one fantastic course, and one blur of a weekend.

And man, they kill it. 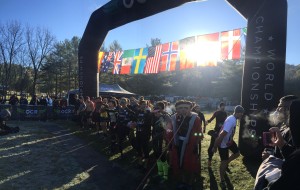 The venue for their second year was back at Kings Domain – it was the smart choice. They have infrastructure for lodging, a permanent (and good) course, amazing terrain, parking close by – everything a new world championship series needs to start out. In 2014, there were roughly 700 athletes. For 2015, that grew to 1700 athletes – and the venue is now stretched to capacity. With some traffic issues, lodging issues, even some backlog issues on the course for the busy waves – Kings Domain isn’t rumored to be the next venue. Where it’ll be, who knows. International is a real option. It’ll need to be bigger, and have more infrastructure. I’ve gotten in on the limited run pre-registration, and will try to make it work. This race is that good.

Where do you start? 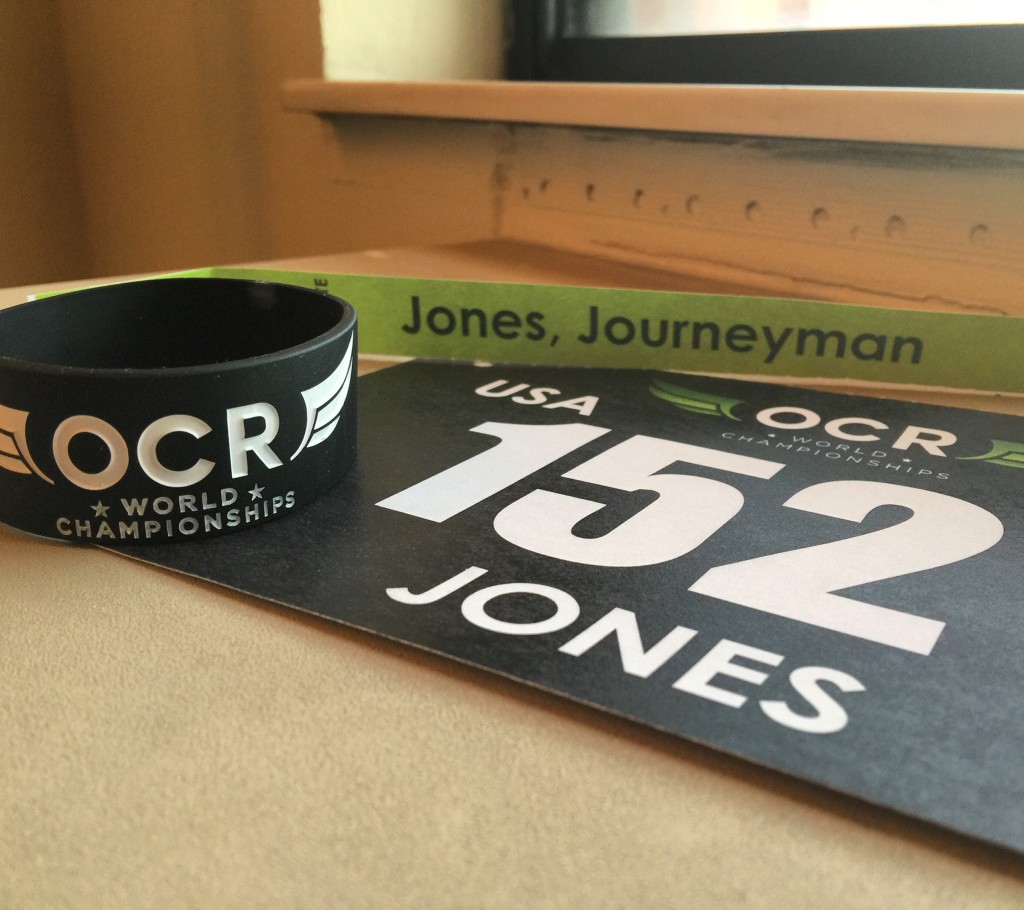 Registration is handled for the majority on Friday. After some long lines, you get a bag, with bib, chip, some bracelets, a plastic beer mug and your finisher shirt. 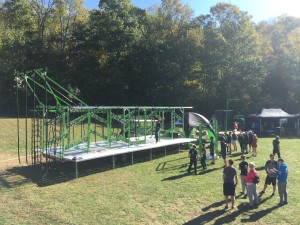 The venue is open, active and bustling. I chose to check out the Dragons Back obstacle from Toughest and the Destroyer wall from ABF Mud Run. I added our team flag to the popup Sandy had brought out and headed over to the Sinergy Sports setup. For the rest of the day, I soaked up the atmosphere. I watched people try out Band Cutter. I chatted with Brits and Swedes. I watched a few minutes of the OCR Warrior filming before a quick trip off site to check into my hotel for the weekend, then back for the gala dinner (Thanks to Joel of Inside Obstacle News for the ticket!), where we saw some awards, watched the preview of the trailer for Rise of the Sufferfest (and finally got to meet Scott), and enjoyed some pasta and several slices of cake. 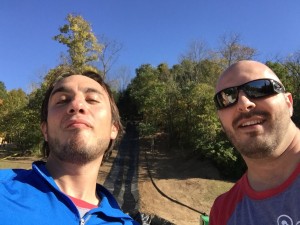 I really appreciate that registration is encouraged on Friday, and that the venue is so bustling and busy – this forces people to turn the race into an event, a full weekend – which in turn makes it way more special than simply showing up, racing, then going home. While it’s not something every every event can (or should) do, it helps add to the special feel of OCRWC, which reducing a TON of race day complexity.

After dinner, I headed back for a good nights sleep.

I showed up around 10am, to hear that the Elites suffered due to the cold, 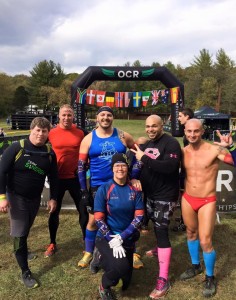 including a DNF for Pak – but running in the Journeyman entry meant I didn’t have to worry about things until 2pm – so I stayed warm, and watched people on the Band Cutter, hung with Sinergy Sports, and watched the age groupers freeze as they tried (and re-tried) the Skull Alley and Platinum Rig obstacles. The vibe of the festival at this event is incredible – people gather, cheer, celebrate and groan as athletes move through, fall off and ultimately give up their bands, or continue on through the obstacles – it’s electric, and nothing like you see at a big box event series – especially because the athletes are lycra clad swedes, or Mudstacle logo’d Brits, or a whole host of international’s – this is TRULY the World Championships.
Finally, we left at 2pm. I don’t do race recaps – courses change, obstacles are rebuilt. The highlights and lowlights are many. This course chewed me up, then spat me out. I lost my band very early – mostly due to simple frustration – when we hit the first set of monkey bars (the FIRST set, not the sawtooth set), I fell two runs before the end, and when it came to some retries – I just couldn’t get my grip back – with two way more capable battle buddies waiting, and the knowledge that I’d simply lose my band later regardless, I gave it up and took the penalty. I was beating myself up mentally for a while for that one. As the course continued, I found that this was not a good day for my grip strength – failing pretty much everything that involved hanging – from monkey bars, to Savage Race’s pipe dreams, to the “simple” wet rope climb. Lots of work needs to be done, it seems. 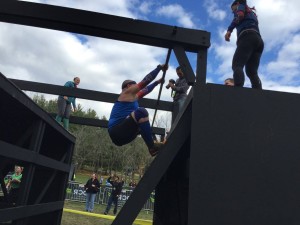 I did very much like the Dragons Back obstacle from Europe’s Toughest – this head f*ck of a leap caused many athletes to stop dead in their tracks, and freeze up. The first table was busy when I got there, so rather than psyching myself out, I waited at ground level before climbing up – then quickly got the two jumps done, before I could over think it. This is also where I strained my left ankle – again – and gave me more crap to whine about for the rest of the course. 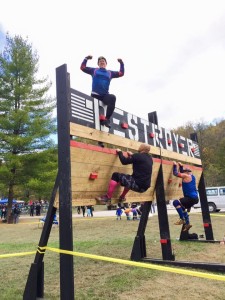 I loved the river crossing that was new for us this year – nice and cold, it felt great on my ankle and went on a nice length of time. This years big surprise was the Sternum Check obstacle – known as Gut Check to Shale Hill fans – despite being no bigger or more complicated than previous years, it seems to wipe out considerably more of the field than before – I suspect the cold made this harder than it needed to be – and in Age Group and other waves, it was backed up a bit, causing people to over think it and retry. If memories serves, in previous years if you failed it once, you could use the side support to make it – not an option this time around. Kudos to Sandy who kept her band to this point, and tried this thing dozens of times before finally giving it up – rightly choosing to lose the wrist band, and not cracking a rib, or her head! This one chewed my arm up good, and having already lost my band, I simply took the penalty and the walk of shame. 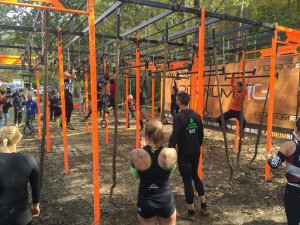 The use of two Platinum Rigs seems a bit … excessive. The rig setup in 2014 was just way too hard, so they dialed it back this year- thankfully (still way too much for me) – but to then put two in? I long for the day complex rigs are no longer “the thing” in OCR. Dragons Back and the Destroyer wall were challenging, provided massive senses of accomplishment, and were much more fun.

By the time we hit mile 8 or so, it was dark, I was getting worried about finishing in the 6 hour cut off, and more worried that despite the cold, I was no longer really feeling it – plus, we’d picked up some fellow athletes who were also up against the time, but hadn’t packed headlamps – while New England Spahtens are always happy to help – especially when Momma Hen is your battle buddy – it didn’t make me warm up any quicker. By this point, I wasn’t being particularly productive in the obstacle department – doing what I needed to do to keep moving, without mentally getting in my own way. It seemed to take forever to get to the Pinnacle Hill – and in the pitch dark, with just a headlamp, we made short order of it. Then, the damn slide. Last year, I jammed my ankle at the bottom – and knowing I’d been limping for ten miles, I may have been the only person of the entire event to walk down the side. I was cold, limping, up against time hacks and frankly, didn’t particularly care. So yes, I walked down the hill. 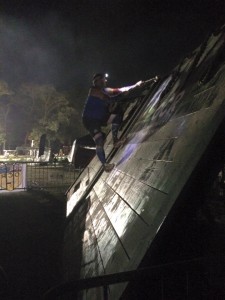 Now we were in flood lamp – ten or so minutes before the cut, and I took off. Icebug’s and my body weight made short order of the big walls, getting great traction and running right up them. Tip of the Spear wasn’t too bad, until my cold hands failed me, and skull alley was failed pretty quickly. I got right up the warped wall, rolled the cargo net, and limped up to the finish line, in the dark, to a quiet finish. The medal was placed over my neck, I grabbed water and complained more than was needed about no banana’s, and slunk off to watch Momma Hen cross.

This makes the event sound horrible – but frankly, I entered this way below any peak I’ve ever had before. I wasn’t ready, and it showed me all my weaknesses. As it should – this is the WORLD CHAMPIONSHIPS. I know I could show up to a Spartan event and make it through well – heck, I did the Killington Beast recently, with only a few penalties – this event is another class, and it SHOULD be hard. There are things I’d love to see tweaked or changed or adapted – but this should be a challenge. 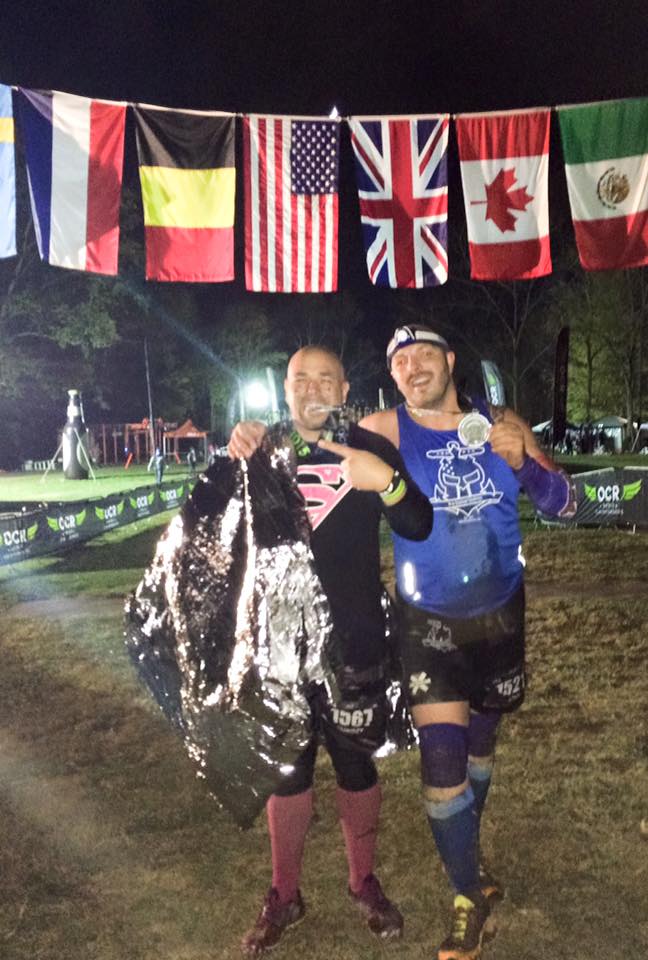 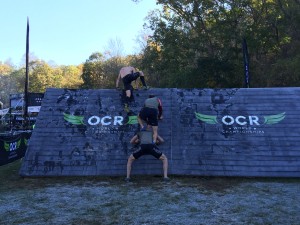 If you come to this event you owe it to yourself to stay on Sunday. Team racing made me green with envy. They split into teams of three – leaving early in the morning with a runner, who switched to an obstacle expert, who switched to the strength guy – then all three finished together. The course was adapted to incorporate them all, and the team finish times were super quick – and watching teams of three men, or three women cross that finish line all day made me wish I was out there, gimpy ankle and all. Stay around to watch these guys. Late in the morning, Operation Enduring Warrior crossed the line, flag flying, and I don’t think there was a dry eye in the place. Awesome job. 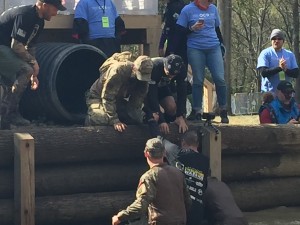 I limped around all over the place – watched the Sinergy Sports competition on Band Cutter, caught up with my friends at Wreck Bag, finally enjoyed a few free beers, before heading out to dinner later in the day and one last nights sleep before traveling home.

So, whats the big deal. It’s just another race, right? OCRs are all the same, so really, why fly somewhere just to run some event I’ll probably not win, right?

The vibe here is electric. The crowds of athletes, spectators, supporters, sponsors and vendors are amazing. The support from other race brands is unique in the sport. Even if you’re getting chewed up and spat out by the course, you’re smiling at every single athlete who achieves something they didn’t think they could do – and proud for every single person around you who still has their black band on. You *FEEL* for everyone who doesn’t have theirs. You care about the outcome in a way no other brand has touched. 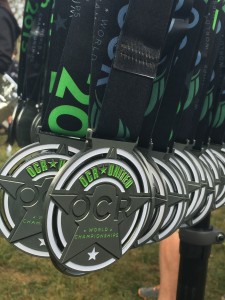 Last year, I made a throw away comment in my review “this race reminded me why I loved OCR” – and was honored when they led their intro video with that quote – but even in 2015, when I came in less prepared, less capable and was beat up hard – I still jumped on the chance to register for the 2016 event, despite not knowing where, or when – because this race reminded why I loved OCR *again*.

OCR World Championships is a shining example of community, co-operation, co-branding. Each year, they’ve adapted and changed and developed, and that’ll never stop. Agree with everything they do or not, they care about the sport, the athlete (even the journeyman division) and the outcome.