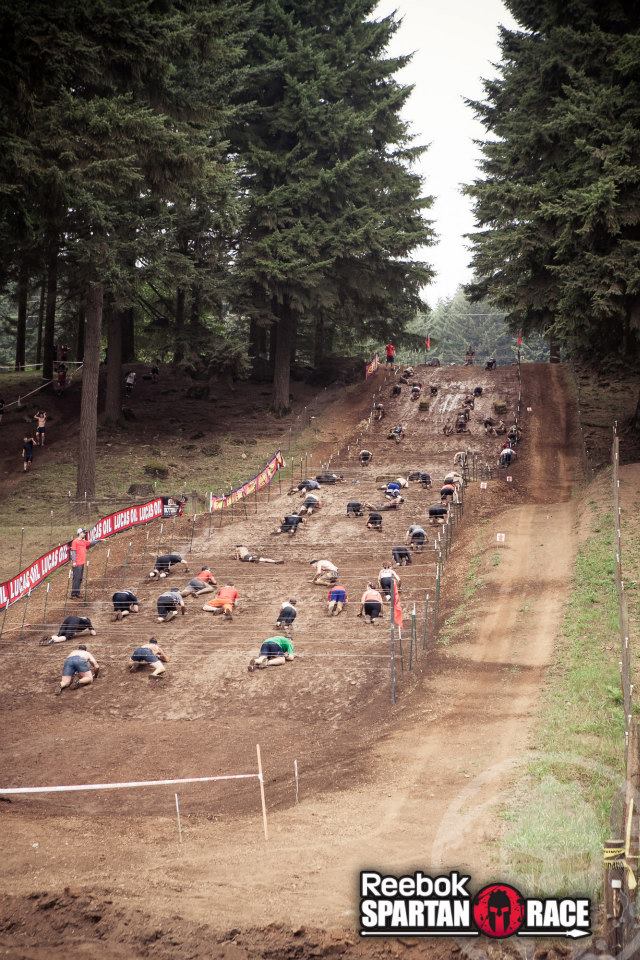 Located just 20 Miles North East of Portland Oregon, Washougal Motocross Park in Washougal Washington was the site for the Reebok Spartan Race Sprint Championships. Many well known elites were present (Hobie Call, Andi Hardy, etc) as well as the New England Spahtens. The PacNW course was a typical 3.5 mile sprint which contained 21 obstacles and three aid stations. Terrain was varied and technical, read on to see how this Sprint fares against others.

Spartan Race did a great job communicating in advance of the event as to directions, spectator requirements, limitations on parking etc. Spartan even provided two digital highway signs making sure traffic was not a disturbance to the small Washington town. The venue was in a great location, with massive on site parking ($10) which was managed by local staff who typically work the venue. 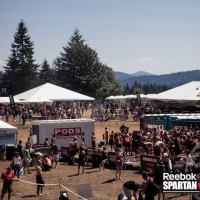 An elevated festival area provided gorgeous views of the surrounding river valley. Spartan Race stuck with a now typical festival layout. Upon entering you are presented with the “Bib Wall” to find your bib if needed. At this stage you proceed to the waiver table (again if needed) and finally on to the registration/bib pick up lanes which are sorted by bib number. Volunteers and staff were able to rapidly check in participants and spectators, it is at this time that the heat verification system is added to your registration. From here you entered into the festival area which contained food, dining tent, and a segregated beer garden. To the left you were presented with bag check, (walled off) restrooms, shower area and changing tents. Directly in front was the merchandise tent (some items differ from each coast events) the local vendors and constant sponsors, the gladiator chute, finish line, timing area, pro-team and future race registration tents. Finally, to the right was the start coral (located directly behind the finish line and timing tents, as well as the kids course. Once again Spartan Race used a hub system to allow spectators unprecedented views of the event. In the case of Washougal, being a Motocross course, numerous spectator options existed and didn’t require much planning to utilize or limit fan interaction/disregard for boundaries. These spectator areas covered all of the key obstacles that are traditionally in spectator zones, as well as some of the more unique obstacles for this location. The entire time the course was well marked (including accurate mile markers), there is no complaints as to the preparation the team put into this course. 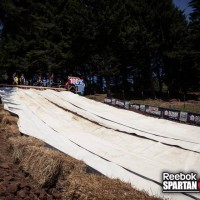 Spartan Race set out a challenging 3.5 mile course (unofficially 3.72 miles on both of my runs) which used steep long hill climbs, short hill bursts (both uphill and down hill), lots of mud, some motocross track, back woods trails, and 21 obstacles. The race started with a .5 mile uphill climb which had military hurtles at .3 miles. Due to the climate and recent weather, natural mud was not a factor on this course, but it was very dusty, which in some cases made the steep rocky descents just as slippery as if mud was present. As a competitor, almost the first 2 miles were out of spectator view, focusing on trail running, hill climbs, and some of the obstacles less likely to draw spectators, i.e. Tire Flip, Over Under Through, Inverted Wall, Tractor Pull (incidentally this had the same twist as the Mid-West Super, as it was the same build trucks present), Hercules Hoist (also same equipment as Illinois (which I failed in Illinois but completed in Washougal)), cargo net, etc. 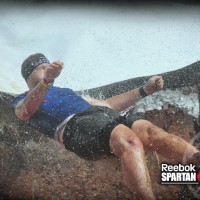 Coming out of the woods at approximately two miles, Spartan Race presented competitors with the Atlas carry, and then into one of two signature obstacles for this course, a fast 4 lane 300 foot Slip-n-Slide down the motocross course into a deep pool. Spectators had a fantastic view of this obstacle as they were able to sit at its base as well as both sides due to spectator tunnels in place for motocross events. The slip and slide was then followed by the Sand Bag Carry, which was over twice the distance of the Slip-n-Slide and immediately back to the base. 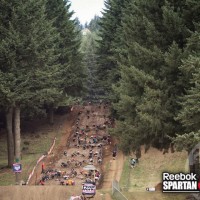 The second signature obstacle was then presented to competitors in the form of a REQUIRED (no option to “Burpee out”) quarter mile Uphill Barbed Wire Climb. As the name suggests, this was not a standard barbed wire crawl, yes the wire was about 18 inches off the ground, but this was a long slow climb (think 20-30 minutes alone) on a 40 foot wide path that was slick immediately. The Barbed Wire Climb featured multiple tiers, hey bales, ditches, fire hoses, ropes (only for the last 60 ft) and amazing spectator access in which you could very easily follow a friend or family member all the way to the summit. 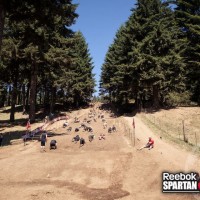 At this point in the course you were tired, but presented with the inverted wall and a moderate run down the MX course which featured ruts from competitive races (RedBull sponsors national finals at this course). Racers then confronted low barbed wire mud hills, there were approximately 20 in total, and were low, perhaps only 2 ft up and then down into a mud puddle, additional track running and then the infamous Rolling Mud. At PacNW there were 4-5 in quick succession with steep inclines and deep pools, however the hills did degrade during the day and allowed competitors to just trudge through without any climb. 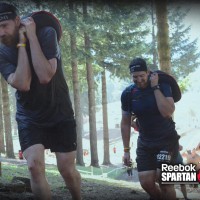 Spectators then were able to see amazing views of competitors as they faced 7 rapid fire obstacles. Rope climb was first, into the Spartan Race favorites, the Spear Man and Horizontal Traverse Walls, then into a tire drag, Rolling Mud complete with barbed wire, and low wall forcing you to go under water (this was a photo opportunity), Slippery Wall and finally down the Gladiator Chute. 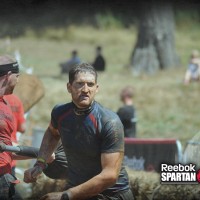 Saturday had far more competitors who were there to compete, Sunday was lower in attendance and also the more social group of runners. Obstacles did show some wear and tear on Sunday, built up mud on some, more bent spears, more ruts/trenches in the .25 mile climb but the mud was also more slick, shallower mud that was more sandy, Rolling Mud had thicker mud and less inclines to the hills, etc. Course times for me varied by 20 minutes between days, but that is not a factor of the course so much as Hurricane Heat, my two heats, and on Sunday I ran with a first timer (my brother) with my CamelBak in case he felt he needed it. Due to this, Sunday’s time was not intended to be fast, just a completion and I was more than impressed with the course and that it was challenging but not so hard as to scare off a first timer. Both days I did incur 60 Burpees due to two failed obstacles, my brother had 90, where we did not overlap on fails also added time.