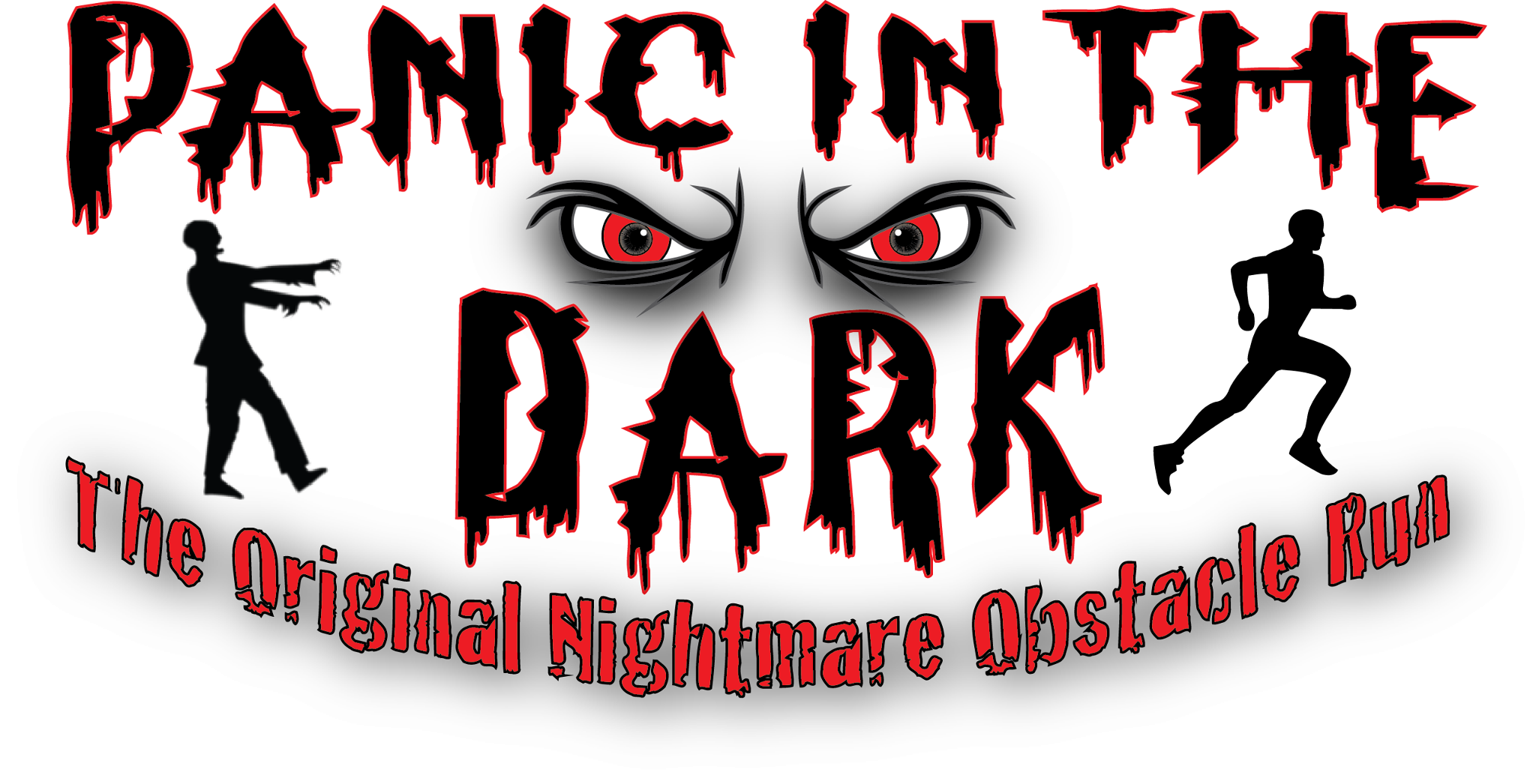 Panic in the Dark is the epitome of a local race. Hosted by Smithfest events – it’s one of several events of different kinds that they put on in a year – not all of them obstacle or race focussed, so when it comes to event logistics and co-ordination, they know their business.

Panic in the Dark, as the name suggests, is one of the few night time races on the calendar. With a zombie apocalypse theme -the obstacles and terrain would be relatively straight forward in daylight, but when you throw in the darkness, and the shock value of zombies – it changes the game entirely.

Our party had started in the afternoon – Shale Hill Adventure Farms and Icebug Shoes had made the trip down from VT with a full range of Icebugs for people to check out and try on – thanks to everyone who came out to visit, tried on some shoes and took some goodies home! This was happening just a couple of miles away from the Lowell Auditorium – the venue for Panic in the Dark, so it was a really easy drive over, and parking was just $5 in a public lot over the street. If you wanted to brave parking on the streets in Lowell, then parking was free.

Unlike most events, Panic had their entire “festival”, including check in, bag check, after party in one place, then they bussed you to the actual race course – so when we arrived at the auditorium, people were hanging out, meeting their friends and getting excited for the race – with plenty of space and plenty of room to hang out. 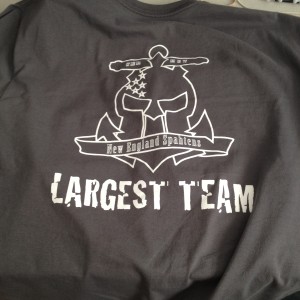 Check in was a little backed up when I arrived – but even this was only a five or so minute wait. We flashed our ID, had our name crossed off a list and got our packet with bib, wrist band and timing chip, before moving over to a shorter line to pick up our T Shirts. Surprise #1 – Smithfest had a special race shirt made up for the New England Spahtens – with the Panic logo on the front, and instead of the usual back full of sponsors, a huge Spahten logo and “Largest Team” – kudos to Smithfest Events – you just stepped the game up for all OCRs who are interested in attracting big teams to their events. I could go on at length about how different OCRs attract big teams and work with big teams – but I think thats a blog post for another day 🙂 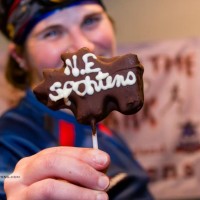 After we picked up our shirts and headed into the auditorium – another surprise – a team area set aside, with a fantastic Edible Arrangement for us to snack on, a couple of Panic / Spahten flags were pretty awesome too. 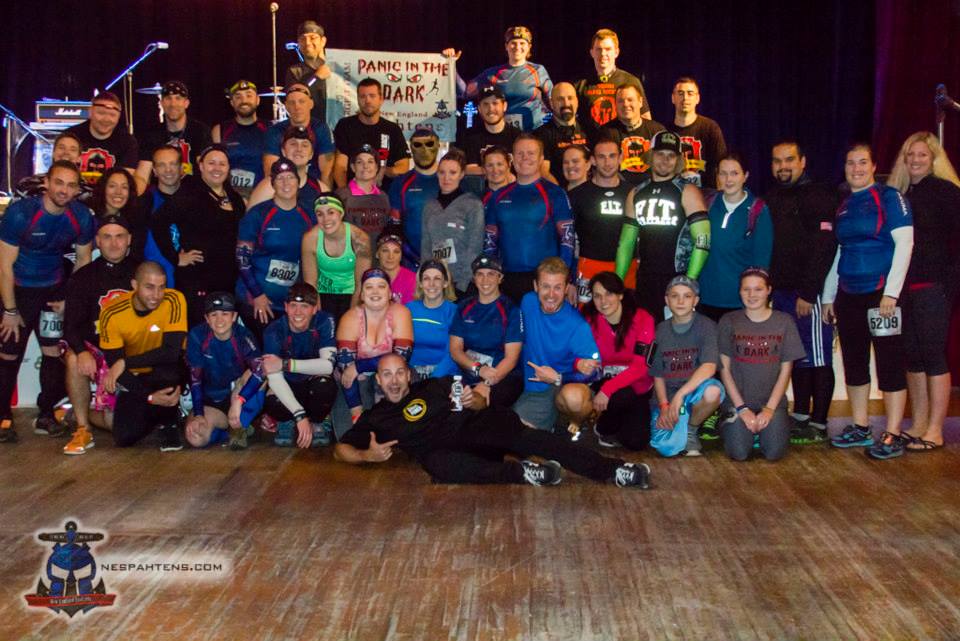 Our heat time was scheduled for 7pm, but we were a bit behind schedule and probably didn’t go out until about 7:20pm, but that was cool – we had a huge space to fill, over 60 Spahtens to hang out with, and a fun fesitval area to check out. Vendors included Core Power, a Paleo food vendor – a Panic in the Dark store and a professional makeup booth – I don’t know if the shuffling zombies in the huge cages count as vendors, but they helped to set the tone, for sure.

An announcer on the stage would call out the wave times, and when ours was called 60 odd Spahtens headed out to the corridor to line up – we were led through the corridors of the auditorium – handed head torches if needed – and led down into a staging room with a TV, and our lovely host Fred gave us a safety speech. Don’t touch the zombies, and they won’t touch you – use the flashing setting of your torch if you need aid or help at any time – and the amusing safe word – Twinkie!

Then, the horror started – the safety speech was interrupted – the zombie apocalypse had started! We were evacuated from the briefing room with zombies banging on the doors and windows – and hustled through some more corridors to the buses. Zombies in the corridors would jump out to scare you, which got the adrenaline pumping early – our military escort got us on the buses and off to the venue we went.

As a way to get large crowds onto buses for transport at an OCR, it sure beats anything we’ve seen before!

At the venue, we were escorted off the bus by a very serious looking dude who managed to stay in character the entire time – a testament to his acting, and our poor jokes, and even managed to get us to shush – we started up a pitch black road, stepping over zombies who were prone on the ground – then some shouts, screams, and the race was off.

This initial run was quite confusing – with so many people in a pack, you would find zombies lurching out of the crowds, or stepping out of the bushes at the side of the road – and for the entire race, the zombies did an excellent job of popping up at exactly the right moment, or jumping out from the bushes you weren’t expecting them to be behind.

As a course, this didn’t rank up there as a challenging obstacle course – and it’s important to point out it was never meant to. There were a few walls – a couple of 5′ and a bigger, maybe 10′ with three steps. A “through” type wall, a pumpkin carry with a crawl under wall – a couple of balance logs and some “natural terrain” style obstacles – like tennis nets to step over, kiddie play parks to climb through (including slides!) – they had even put out an inflatable kids obstacle course for us to clamber through (which explained the warning of NO SPIKES!).

The trails were a combination of tarmac and packed trail, with a few natural hills to get up – it was a fairly fast flowing course in the end. Again, worth noting that this was designed to be a SCARY course, not a challenging course – it’s debatable if it should even be timed, as the front runners blew through so fast they probably missed some of the biggest scares and fun surprises of the night.

Check out course footage from Jeff

But, timed it was, and that introduces a level of competition – as a result, there were spots that need work to improve course flow and allow fast runners to pass the slow runners – the abandoned bus was neat – but introduced a single track bottle neck that I think everyone was frustrated by – the webbing stretched across it was truly challenging, and slowed us all down to a crawl. In a similar vein, the kids inflatable obstacle introduced a two track bottleneck – although it has to be said, the scary clowns at the end were fantastic.

An especially nice touch was the run through the school. A corridor littered with mouse traps, a room full of TVs with static on the screen, and lots of zombies to jump out at you.

It’s funny – while many of the zombies didn’t really *scare* me – what was spooky was when I was running at sections of the course on my own – being so dark, and running with just a head light, even when there weren’t any zombies, you were still expecting them and waiting for them – the tension was pretty high in places! I was SO expecting zombies to jump out at me during one run down a trail that was littered with carved pumpkins and glow sticks .. it’s almost worse when they didn’t!

GPS Log – started half way in on the bus 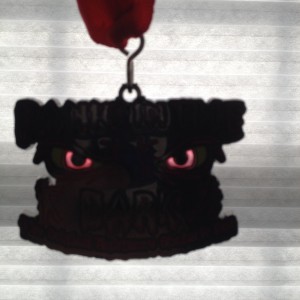 Finishing the race was a long tunnel crawl that slowed everyone down, before we crossed the finish line and were handed our sweet finishers medals. I understand the 2012 Panic medals weren’t so hot, so this year, they had glass eyes, and were pretty badass – again, way to step the game up!

Back on the bus to the auditorium, the after party was in full swing. They had a really good band playing, great local beer as a free beer, with it available for purchase at a relatively reasonable price. The paleo meatballs were amazing as a post race snack – and the company, as always, was second to none.

As a team, we took 7 or 8 of the top 10 placements, including a fantastic placement for Corrine, who won the Women’s overall spot, and several high age group placements happened. Racemenu needs to come up with a better way to secure their shoe tags – as many of us lost those during various crawls or tangled rope obstacles – not all race and trail shoes have laces to use (mine did not, and I lost my tag!)

As a team, we try to encourage people to #racelocal and support local. When local race directors are putting on events that are this much fun, and this unique, it’s not a tough thing to do. This was a high quality event – and while it wasn’t the toughest physical challenge you’ll find in your race calendar, everyone from place group winners to back markers agreed – this was a fun night out.