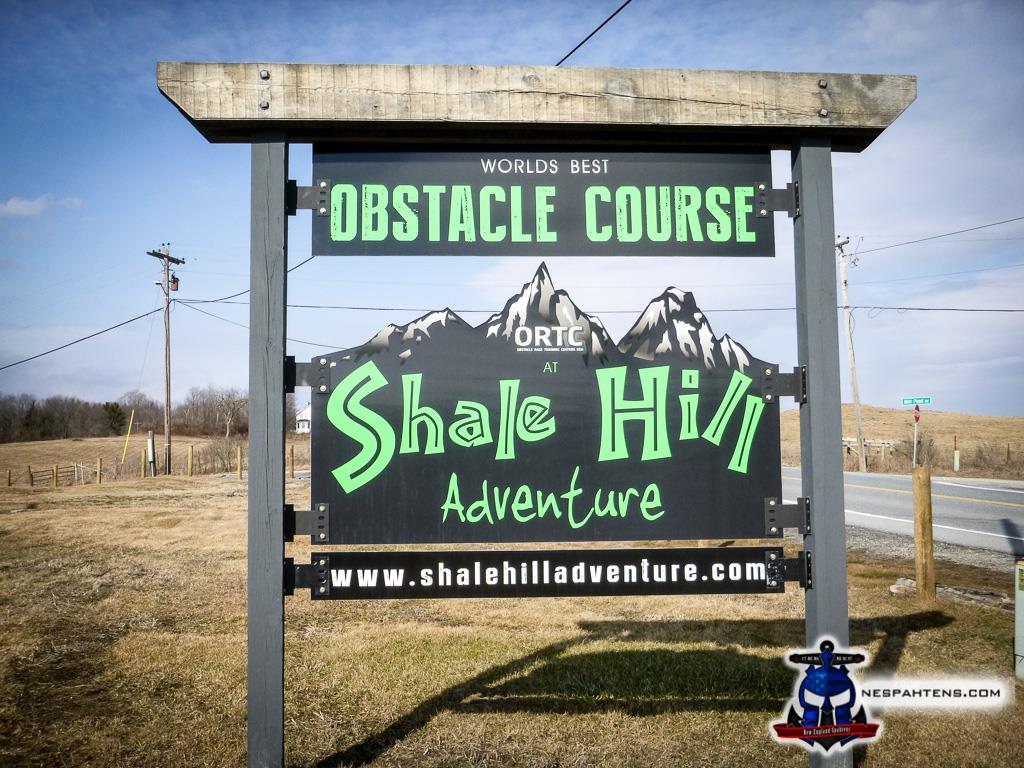 Due to some unfortunate delays with air travel, I couldn’t make my annual trip to Shale Hill to partake in the even that sits right up there with my favorite event’s ever – Polar Bear Challenge. I had no bacon. I didn’t play on The Destroyer.

Fortunately, Niki did – and has written up her experience. Over to you, Niki! 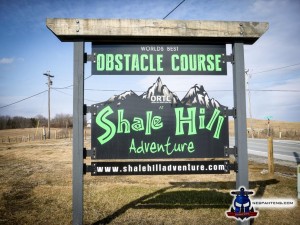 This weekend one of the largest groups yet of Spahtens headed up to Shale Hill to take on the 4th annual Polar Bear challenge, an “as many laps as you can in 8 hours” event on the 6.5 mile, 70(ish) obstacle permanent obstacle course. This year presented a whole new challenge, as ironically, while most of us left a snow storm in southern New England, arrived to a nearly snowless terrain in Benson, Vermont. With the day of weather expected to be 40f and partly cloudy, we were in for an entirely different experience than not only the past, but what was expected for a February race in Vermont.

This was my first Polar Bear Challenge at Shale Hill, although not my first race here, and I can’t deny, that the weather for this year made me incredibly happy. Knowing that Rob took advantage of his downtime between Halloween and now, adding in a number of obstacles, a.k.a. Robstacles, as well as teaming up with Larry Cooper to bring a whole new version of The Destroyer, any advantage, especially a snowless one, was incredibly welcomed. 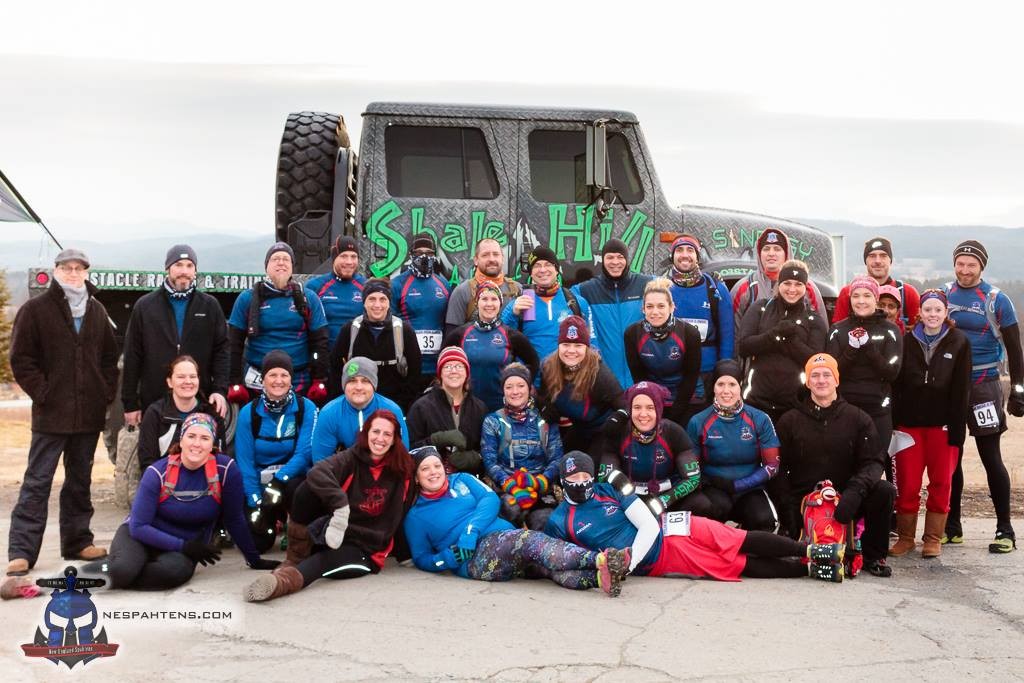 I arrived around 8:30 Friday night on one of the clearest, most star-filled nights that can only be offered in small town Vermont, to take advantage of the new offering of getting our packets the night before the race in order to make a more efficient morning for everyone. I arrived minutes after my housemates left with my packet for me, but instead was greeted with hugs from both Jill and Rob, as well as wonderful puppy love from Max and Mogul. The most wonderful part of Shale Hill is the amazing way they welcome you in like family. Running at Shale Hill isn’t just a race experience like no other, it is one of the most intimate courses you can ever visit where the owners will care to know your name. 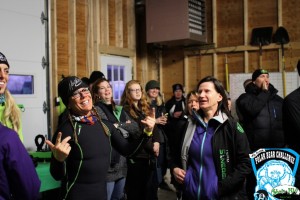 The next day, on a clear cold morning (and another one of those amazing views of the sun rising over the surrounding mountains), we gathered in the party barn, where the Wheel had a wonderful spread for the breakfast buffet, and listened to Rob once more tell us what crazy new ideas he’s thought up for the race this time, what has changed, and what to expect. The pond traverse was closed due to thin ice, but added to the course in the mean time was the Destroyer, with 4 lanes of difficulty; hardest on the far left, easiest on the far right (elites had to go to the left, of course), as well as the new “improved” version of balance alley with rising and falling height of log hops, to the garden, to the a 15′(ish) slack line, and you can’t touch the ground at all in between (thankfully, you only have to repeat the section you fail here and not go back to the beginning like the great wall, if you’re running elite/open), and the obstacle after the fireman’s pole was expanded by two lanes, adding Sinergy fat bars and Sinergy hanging bars. For Polar Bear, failed obstacles collect chips, which are then turned in at the end of your lap where you have to do the penalty listed coordinated with your chip color, as well as roll the die to see how many reps. Penalties this year included sledge hammering a car, lunges up and down the hill with giant logs, and my personal favorite, hugging Sandy Korda (I took this penalty and I was journeyman because this was the bestest penalty ever)! 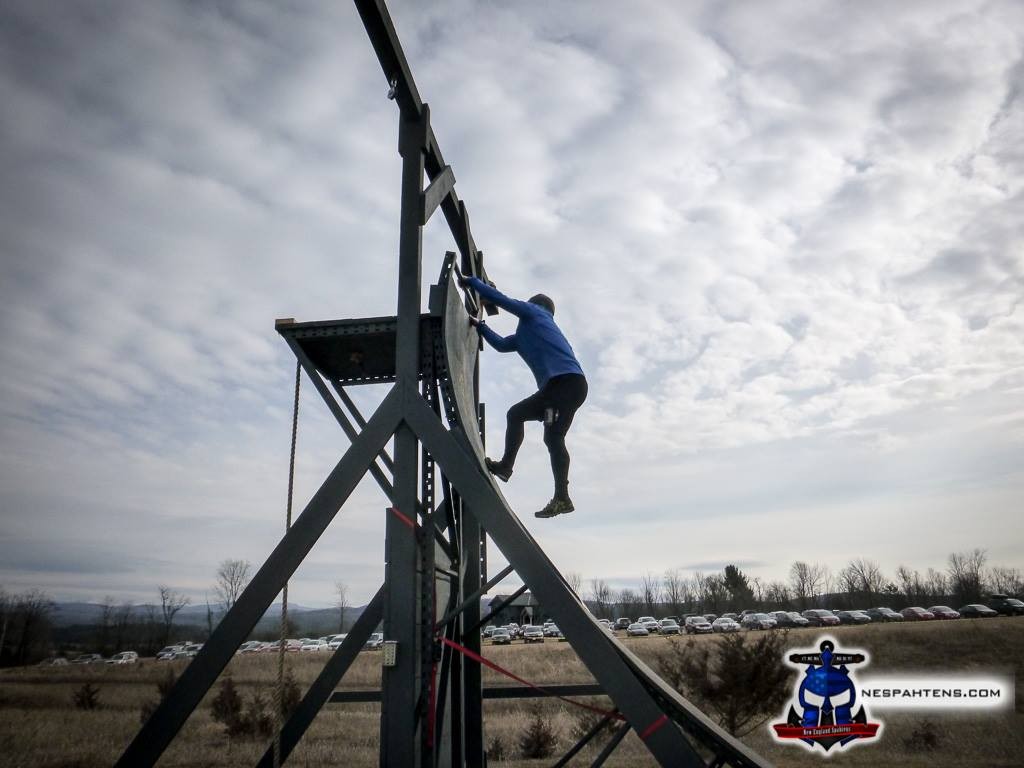 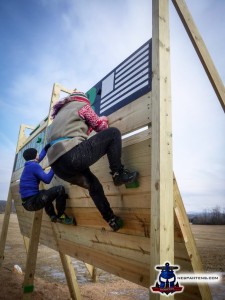 Compared to previous years, the lack of snow definitely allowed for more laps to be completed this year. The winner finished 4 laps in under 8 hours (last year won at 3 laps). While quite chilly in the morning (only about 25-30* at the start of the race), this actually played in our favor, as much of the course that had previously been mud, was frozen stiff. Also, many of the typically saturated areas on the course was ice. However, if you were one of the brave few who took on this course without Icebugs, this may not have played in your favor. There were many times throughout the day where you could hear “I love my Icebugs” being said around all the course. Seeing as that was what was on my feet, I had a VERY good race! When you finished lap one, you went and checked in with timing where your time was recorded, and you received a bracelet. Then you went out again whenever you were ready (of course you need to hit up the buffet for more bacon and other good treats before heading out again) and you would receive a different bracelet at the end of the second lap. If you were running open or elite, then you had to go to the penalty table, turn in your chips, and do your correlating penalties before you could time out that lap. All penalties had to be completed before the end of the 8 hours for the lap to be counted. 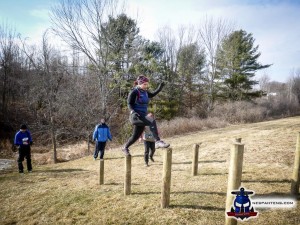 One thing you’ll find at Shale Hill that you’ll likely never find at any other race, is the sincere desire to make their course for everyone. You want a whole new experience that no other course has been able to challenge you with? Run elite. You’re still working on your upper body strength and fear you’d do too many penalties? Run journeyman and enjoy doing everything you can without crazy penalties on the obstacles you can’t. Endurance isn’t for you and 8 hours is too long? Sign up to run Polar Bear for just one lap with the 10k. For all the 8 hour runners, no matter what difficulty, a full breakfast and lunch buffet was included in your registration, provided by the delicious Wheel Inn, which also could be purchased by the 10k runners and spectators.

This year’s finishing medal was gorgeous, and the long sleeve shirts visually appealing. Included in our packet bags were also the cutest beer cozies, stickers, and other awesome goodies. The finishing touch, every NES member got a free training pass for Shale Hill for being a part of the biggest team! And let’s not forget to mention arguably the best part about doing Polar Bear (versus any other Shale Hill event) is the UNLIMITED ALL NATURAL BACON. Yes, UNLIMITED. And it is delicious with the standard (and best ever) chocolate milk received after completing a Shale Hill race.

If you love obstacle course racing, truly love it for the obstacles and the family you create along the way, and you haven’t been to Shale Hill yet, then you’re selling yourself short. You will never experience any obstacles like Robstacles at Spartan (even Norm Koch was there this weekend, and this wasn’t his first visit), and you will never experience a course where the owners want you to become family. This is a course that will help you grow strong, both inside and out. Find a way to get here, and you will never regret the experience.