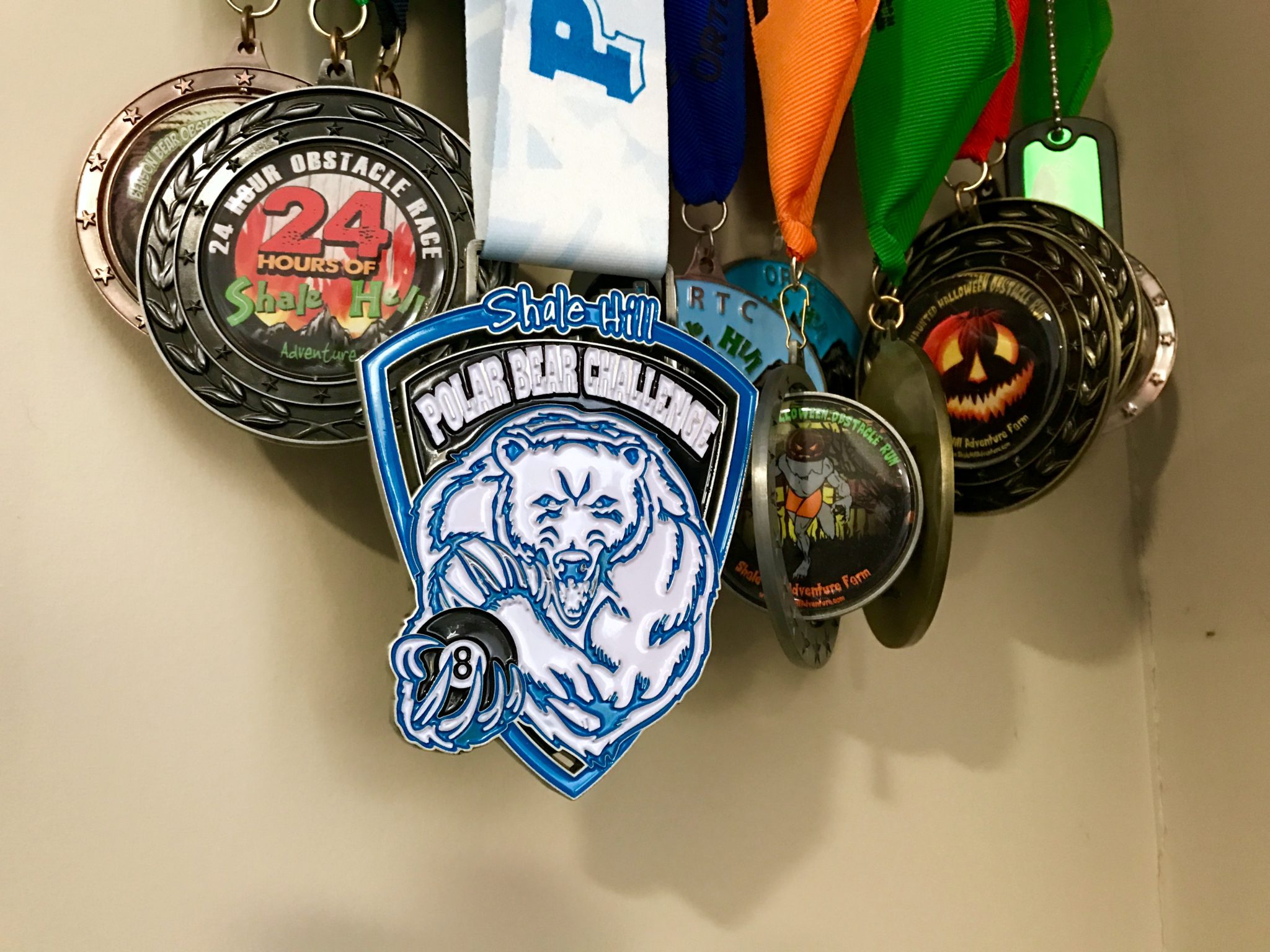 Did you participate in Polar Bear Challenge? Leave your own review here! Want to pick up a 2016 Polar Bear shirt? Shop here! 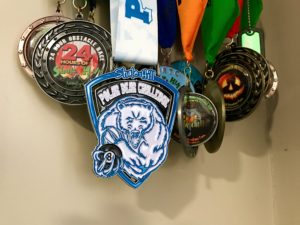 5 years ago, I took a trip up to this place in Vermont that had assured me via email that they had something worth traveling for – and this winter race they were putting on would be something really really great.

Today was the fifth year of that race – the Polar Bear Challenge at Shale Hill remains a destination event for many OCR enthusiasts, providing far far more than most events on the OCR calendar. 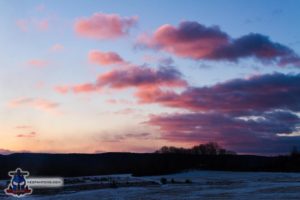 For those who have never visited Shale Hill – it is a property in Benson VT, about 30 minutes outside of Rutland. Primarily, it’s a 10k fixed trail around their property, covering everything from open field to woods – with short sharp hill climbs, a pond and some open running sections. The obstacle count grows from race to race – back in 2012, they had under 50 obstacles, but now, that is more like 75. The obstacles range from the ordinary – walls, crawls, heavy carries – to the famous Destroyer, weaver and gut check – to the wildly unique – and you will have to visit to check them all out. Also, owner Rob keeps adding to the course, with at least two totally new obstacles for this event. 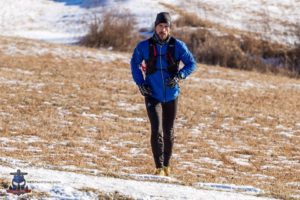 So what makes Polar Bear Challenge a different ball game? Rather than run a lap, cross the finish line, drink a beer, you run for 8 hours. That may simply be a lap, but those so inclined can push for more. Two laps, three laps – or this year it was won by the ever awesome Vincent Larochelle with 4 laps. Don’t have a competitive bone in your body? Then pick the ever popular Journeyman category, which lets you push yourself, try what you would like, and enjoy your experience with no penalties. There’s something for everyone. Including an all day buffet for racers, with rather excellent breakfast and lunch fair to keep you moving.

Of course, it’s not just the obstacles. The weather is the game changer, and the reason you do a race with the name of “Polar Bear Challenge”. We’ve had everything from 3f to 60f at this event, but for 2017 things were a cold 15f to 25f through the day. New Polar Bear sponsor DryRobe were present, and plenty of dryrobes were out and about keeping people warm and toasty when the fires on course weren’t enough (and watch this space, we’ve started talking to them about NES DryRobes …) 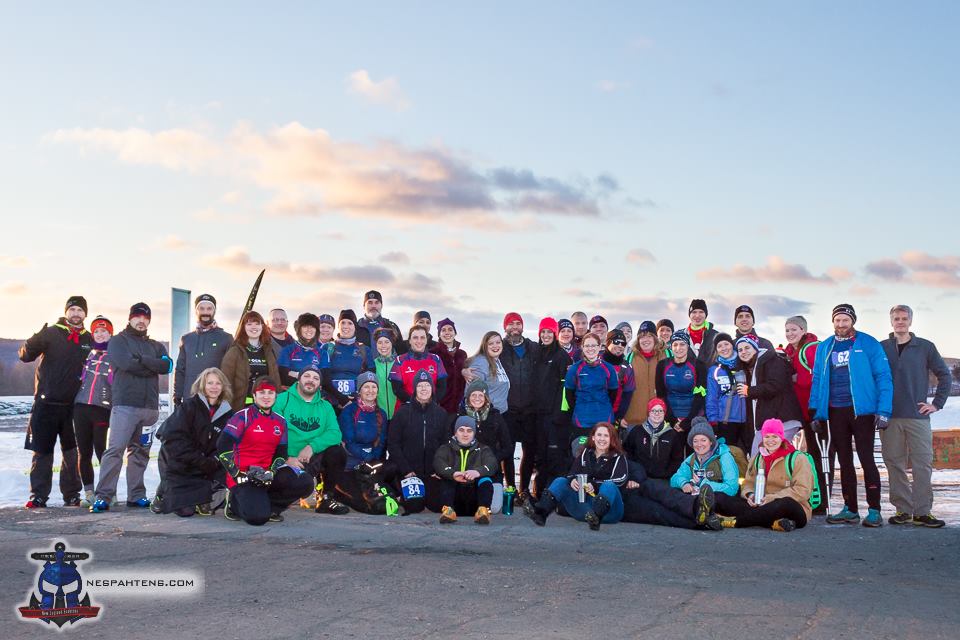 For me – I’ve ran enough laps of Shale Hill to not have anything to prove to myself and was out there for some fun, and mostly, friends. I started the lap on my own, knowing that hanging around at obstacles waiting with a large group would leave me frozen – so I set my own pace and being Journeyman, I picked my obstacles carefully. This tactic was great, until I rolled my shoulder on a simple wall (it’s fine today, but was sore for the rest of the race). The pond was frozen solid, so the traverse obstacle was open – and the ground was nice and frozen, so obstacles like tire drags were nice and simple. The Destroyer destroyed me – well, the Destroyer plus cold – and the warm boots I was wearing weren’t biting on rope obstacles – like I said, I picked my obstacles this time around, and many of the more complex ones I’ve done in summer, warmer events were attempted but ultimately bypassed, the benefit of being Journeyman.

When I hit the Great Traverse wall, I caught up with Nicole Sibley who was running in the more competitive Open category – and continued to pace each other through the rest of the race – obstacles she had to complete or attempt before picking up a chip were obstacles I would sherpa her pack through – and in between we matched pace and chatted about life, the universe and everything – as you tend to do when battle buddy’ing through an OCR. The company was appreciated! 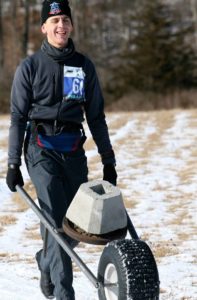 Rob’s two new obstacles – one being a large A frame with wooden “steps” that you had to hoist yourself up using your hands only (on the inside of the obstacle), before transitioning to the other “leg” and going back down was a significant challenge, and bumped the difficulty of this obstacle to a new level beyond similar setups at OCRWC or Samurai Sprint – consistent with Shale Hill’s motto – train harder than you race – if you can do this one, you are golden when you encounter the others. I simply didn’t have the grip or upper body strength for it, but appreciated the significant padding underneath, which included several twin mattresses! His second fresh obstacle, replacing the bucket carry with a new wheelbarrow – a large go-cart type type, on a metal frame, with a 45lb plate and concrete block – weighing close to 100lbs this was proving to be a real challenge for many people, but played to my strengths well and I didn’t find it too challenging, although my grip was shot at the end.

I called it a day at one lap – preferring to hang out with friends, make new friends and have some food than go back out for a second lap. 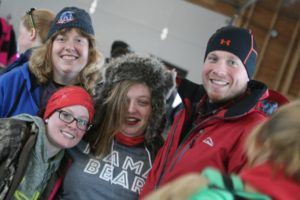 A big shout out to the volunteers! This is one race that standing around in a field or woods all day is particularly brutal – the cold sucking all the body heat from you quickly, and not being able to do much to warm back up. They faced their own endurance event, and like any race – you just can’t do it without them. It was also especially nice seeing many Spahtens out there – getting a welcome smile as you came into their “zone”. Thank you!

This particular Polar Bear seemed to get more than normal numbers of traveling athletes – OCR Nation were down from Canada, and OCR Tube was up from Miami. Amie Booth was in from South Carolina and I got to meet several people who listen to The NE Spahtens Show, including many from the Quebec region – if you are from that region, hi! If you’re French speaking, check out their podcast over at 3-Seconds.

Once again, a long weekend with Shale Hill – the race is, in many ways, simply an excuse to go to a happy place – an amazingly good looking venue, with a world leading obstacle course, where you’re always welcomed like family, surrounded by friends – both on the course, in the party barn, and wherever you go to eat or sleep. It’s like a mini vacation from the real world – one that sends you home sore and achy, with bruises in places you didn’t know could bruise.

And what more could you ask for in life?