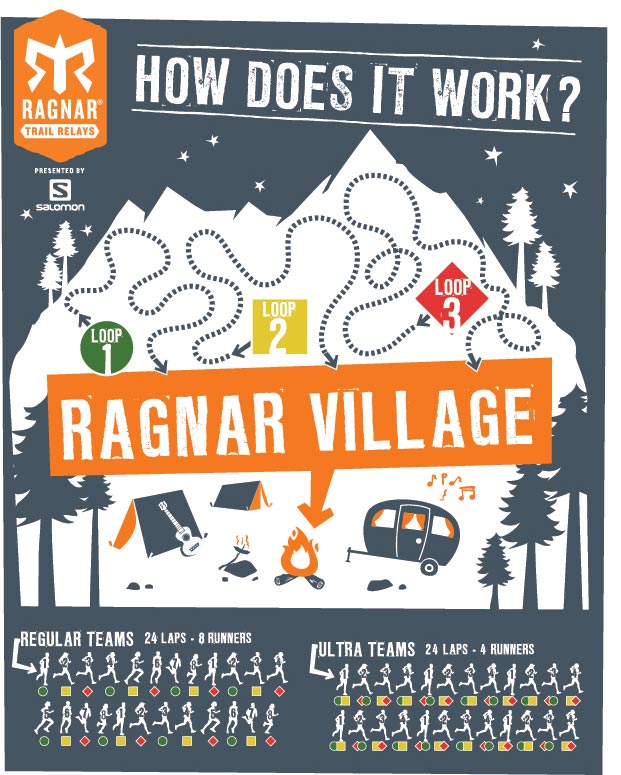 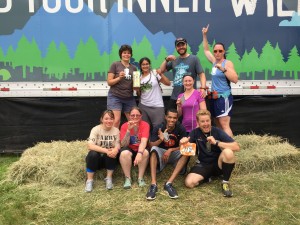 I had never really considered running a Ragnar until this year after Paul ran Cape Cod. He really had a great time, and I kind of caught the Ragnar fever from him. But not being a road runner, I opted to sign up for the New England Trail relay instead. I was picked up by a great team of fellow Spahtens, team captain Ben Milina, his nephew Jed, Aaron Farb, Aubrie, Becky Kennedy, Kelley Swanson, and Omama and together we were about to take on the challenge of Ragnar Relay at Northfield Recreation.

I will say, trail is a bit different than the road. For one, we didn’t need to rent vans (though we did need to borrow for transport) and instead of traveling together in said vans, you set up a campsite. We cordoned off several sections so most of the Spahtens teams (regular and Ultra teams) could be together and hang out. You have more gear than the road races with the tents, pop up canopies, chairs, tables, etc. What is similar is the need for a LOT of water (I’ll get to that later) and All The Food!

We set up our campsite on Friday morning. It was a bit of a scramble to get things set up, get checked in and such. We got our bib (#175) for the team and a belt that we would exchange with each other the whole time. One thing that was odd was that Ragnar seemed to put a random selection of shirts in our pile of shirts. They were excellent at exchanging the shirts however!! The shirts were a nice cotton blend, a bit on the small side, but very comfortable to wear. We watched the safety video, which unfortunately had the food vendor’s generator right outside the viewing tent which made hearing the video difficult, but you did get the general idea, including what to do if you encounter wildlife such as a bear. The video was well done and quite funny in places.

For those not familiar with the set up, there is a team of 8 runners for a regular team or 4 runners for an ultra team. For a regular team, each runner does a “loop” of the course round-robin style, cycling through a Green loop, a Yellow loop and a Red loop in a certain order. The Green loop was the easy loop of 3.5 miles and small elevation changes, the Yellow loop was the medium 4.8 mile loop, which had started with the uphill section that went about a mile and a half or so then went into a gradual descent. The Red loop was the hard loop and it was 6.2 miles. It was a lot of elevation gain followed by a short, technical descent, then back up you went, until finally another quick descent to base camp. All three loops merged about a half mile or so, then you all funneled in to the Transition area, which was a tent with colored mats. You received a slap bracelet with the color loop you were on and met your teammate in there to exchange the bib. Your team mate then returned the slap bracelet and leave the transition area to go back, rest, eat, or shop. The next teammate would then show up to the transition area roughly 15-20 minutes early and wait for the team to come up on the board. This is why pace calculations are pretty important. You have to know when to be there for your teammate and really watch (and check the tent to make sure you don’t miss them). 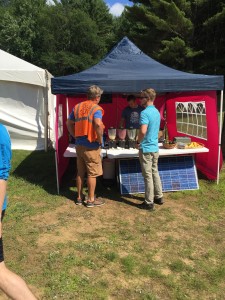 We ensured our first runner got off onto the course, then went about setting up, warming up, etc. I took the time to go around the festival and check out the vendor village. The vendor village had a great number of vendors and a very large fire pit in the middle of it. The swag was really good, and they did have a burrito/rice bowl vendor set up for food, a smoothie vendor (which seemed to be really popular), the Ragnar swag tent, and there were massage tables set up for recovery. The one thing Ragnar was trying to do was cut down on waste, so there were water stations for refilling water bottles. Unfortunately the water was really metallic in flavor and I simply couldn’t stand to drink it. (I admit I was a little suspect of the garden hoses set up from some random tankard anyway). We had lots of bottled water fortunately! It didn’t seem to bother too many people, but I for one, was grateful we had alternatives. 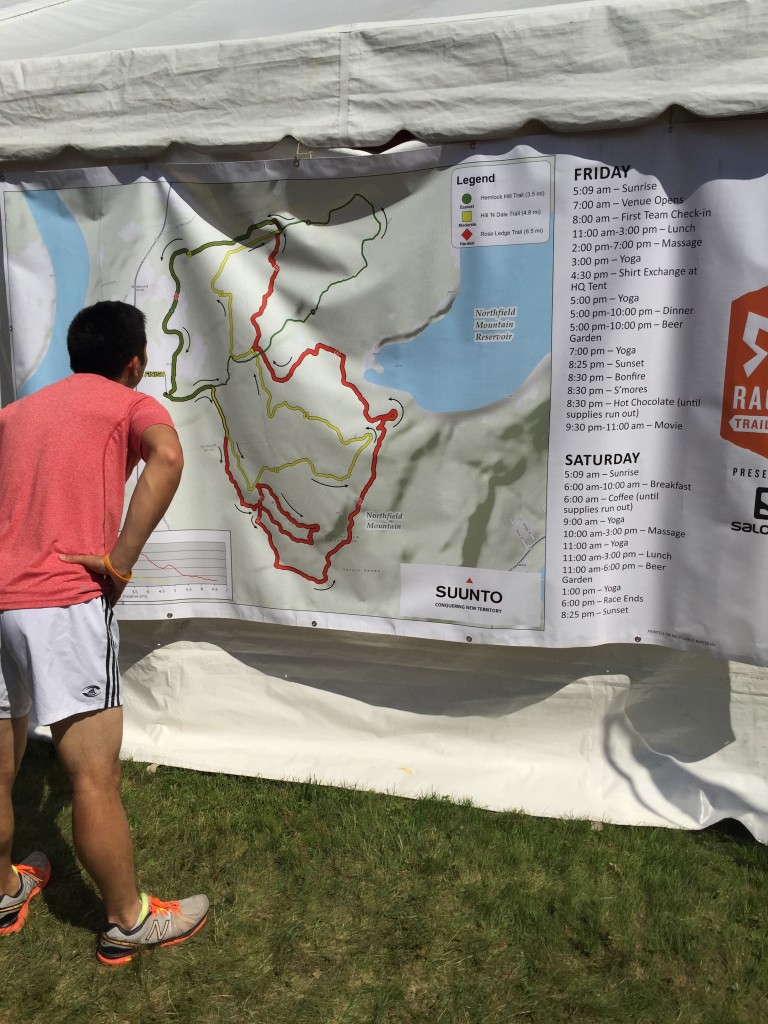 My loop order was Green, Red, Yellow. I have to say the Green loop was a fast, not extremely technical loop, that was well marked. The Red and Yellow loops weren’t as well marked. At times you could go almost a half mile and be convinced you were off trail before you saw a marker. I did very much like their trail markers with the LED lights, as they made it easy to see them in the dark. But I do know people did go off course, so perhaps a few more markers may be in order. I witnessed a guy go completely the wrong way on Yellow but was much faster than me so I couldn’t yell to him to change course. The Red/Yellow split was extremely well lit with LEDs and was frankly quite pretty when I saw it in the dark on my Red loop. The terrain on Red was reasonably technical so watching your footing was definitely encouraged. The trails were a great mix of single track, double and wide fire roads. 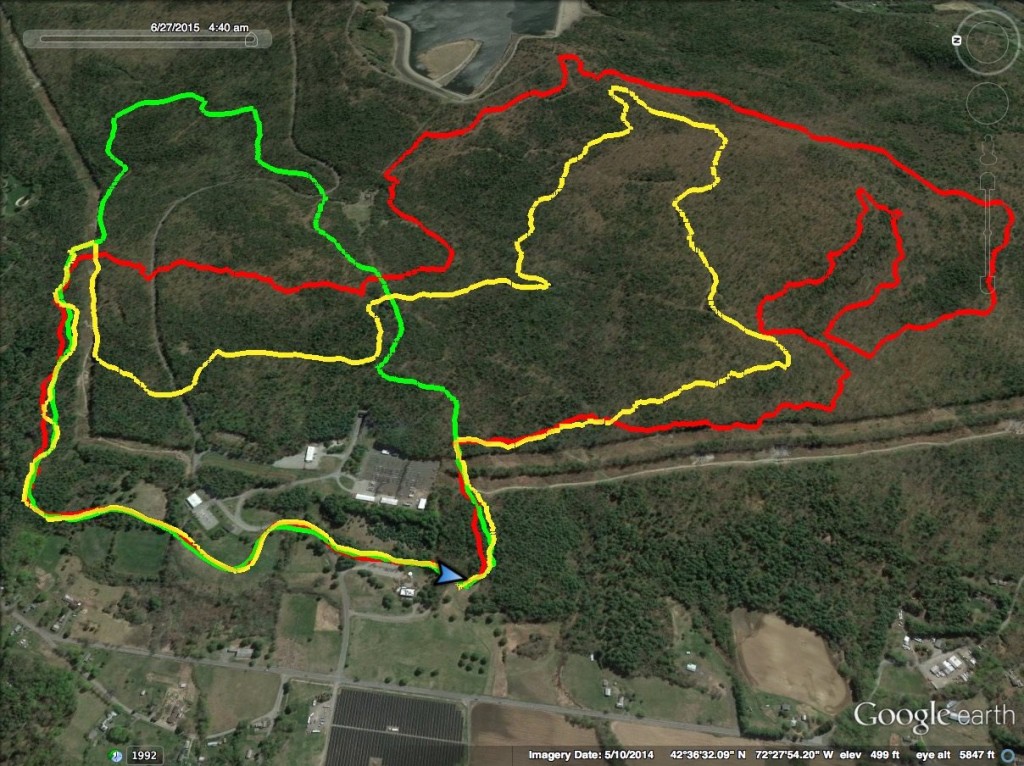 At the campsite, people were encouraged to decorate the tents and have fun. You were also given bags for trash and recycling. They also offered a compost bin for food scraps. We definitely did our part for recycling – all the water bottles ended up in there.

One thing that Ragnar seems to do well is resolve any issues that come up quickly. They had what seemed to be a good number of porta potties – 20 down by us, and another 15 or so up by the village area. There were about 225 teams they said, so in theory this should have been enough. However, it wasn’t NEARLY enough as by nightfall they were to the point of overflowing and had to be shut down. They called in emergency crews from the porta potty vendor and had them come down from New Hampshire in the middle of the night to clean them all up again and have them ready to go. I found that to be really impressive, as many races wouldn’t have done that or been on the ball enough to make a service call like that. Way to go Ragnar!

Another example of how cool the managers were – Saturday was Jed’s birthday. We were on pace to finish under the time cap, but we decided we wanted to do something special. We re-arranged the loops a bit so that Jed could run with Ben for his birthday. They were our last two runners that way and it worked out that both were slated to finish on the green loop. We got the MC to announce Jed’s birthday over the loudspeaker as well. It really made a fantastic time even moreso to see them go out together and get to run together. 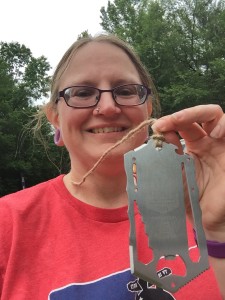 At the end, the medals were every bit up to the Ragnar standard with a big multi-tool, complete with knife and saw.

It was a great and humbling experience for me my first time out. I can see why people travel all over to run these races. There is a different atmosphere there than I see at a typical race. There’s a greater spirit of team there that I’ve only witnessed with the Spahtens. It’s not just every runner for themselves. You have to be there for the team and help finish this. Teams are all there to support each other. For the teams that were in trouble and in danger of not finishing, they let runners go out in pairs just to ensure everyone finished.

I definitely cannot wait to do it again next year!!