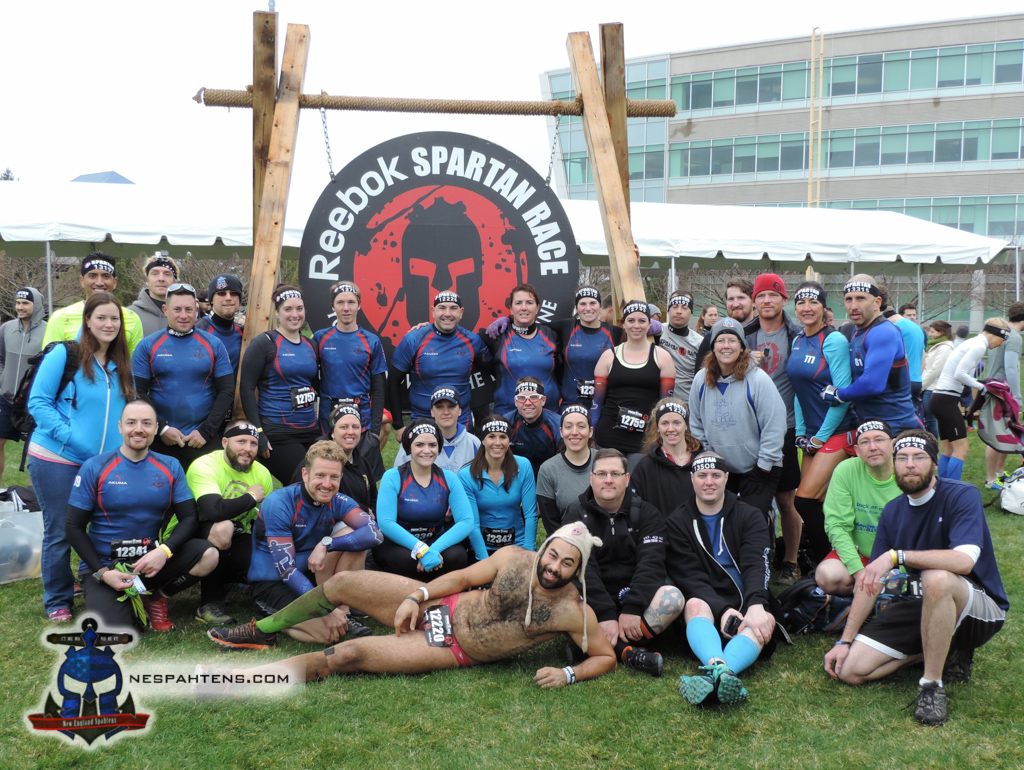 A few weeks ago, our team was afforded the opportunity to be the first made aware of the Reebok Spartan Race Invitational to be held at Reebok HQ in Canton, MA.  A mile and a half course, littered with a bunch of obstacles.  The price was $150 plus insurance and fees, which brought the cost to right around $165.  Many cringed at this price, but I gladly shelled out the money.  Why? Why not!  Canton isn’t far from my place of residence.  I’ve been trying to figure out a way to get myself out on the course that already existed on the Reebok campus, anyway.  Sign me up!  Take my money!

Let me say, I thought it was well worth the price!  It was far more than just a race, as there were a number of events happening at the same time.  More on that later.

For us Wohlens, the trip was pretty straight forward.  Take 128N off of 24 and then get on 138.  As we were turning onto 138, we already knew we were in the right place!  Obstacles were visible from the main road…um…Awesome! One additional turn and we just had to find the entrance, loop around the whole campus, and park in a garage(!!!) for free(!!!).

Registration was a little confusing.  Everyone was coming across the festival area and having to loop around the other side of the registration tents to get on the correct side, but with only 800 participants this wasn’t pandemonium.  We got registered in no time, using what might be the new checkin/registration system.  It was computerized – licenses are scanned, you initial an authorization electronically, and you get your bib and other stuffs.  (Other stuffs included: a food coupon and a 40% off coupon for any purchase made at the Reebok Store until 5pm)

All registered we gathered with some other Spahtens, to prepare for our taste of glory at 10am!  We Bag Dropped – that means yet another FREEBIE!

The corral was structured much like the stadium series.  Everyone gathered in a pack at their starting time, but only 5 athletes were allowed over the starting wall at a time with each group released approximate 60 seconds apart, with our favorite person sending us off – Dustin!

There weren’t any real surprises for obstacles, but the course was jam packed with all of our favorites and then some.  Straight away there was 5 foot wall which led to a short run through a parking garage and “through the bushes” which brought you back out to another sidewalk up over a platform with a “ladder” on either side, and then back on grass.  There was another 5 foot wall, a slight hill climb and yet another 5 foot wall at the top of the hill that I treated like a 6-8 foot wall being that it was angled on the hill.  Banging a right led to the rope climb, where I earned my first set of burpees (one day, rope climb…).  From here we had a decent “barbed wire crawl” (with rope) through a wooded area followed by several trees with rope threaded between them which required going over or through.  At the clearing was a 50# sandbag carry, if you put it down at all there were burpees!  Next was a personal favorite, the tire flip (I opted for the bigger option), followed by a box over and then down and outs requiring you get muddy by crawling under logs.  Once good and muddy, it was time for the Herc Hoist (again choosing the men’s weight)- which is probably one of the shorter ones I’ve seen.  The traverse wall was next, and many had problems with all the first handholds being fully muddy.  I failed, which I haven’t done in a while, after several attempts at trying to get a good hold and switch pattern to get beyond those first few exchanges.  Well played SR, well played! Next was the Slippery Wall.  While I didn’t find this so slippery, the masterminds added another angled piece at the top which made it just a smidge trickier.  Once over there was a variation on the inverted wall.  I had to negotiate this one, as there was an overhang to deal with and a rope on the other side.  There was a balance beam made from a log that required a slight incline balance element, then the weighted sleds.  These were followed by the log hop, which were all fairly close in diameter but varied in height. From what I could tell, all row options were solid.  We climbed under the boxes we went over earlier, looped around and then did a bear crawl through the cargo net, only to go through one more tunnel that led under the ladder platform mentioned earlier.  Next was Monkey Bars – the variation was the pegs on either side of the wood plank, then back through the garage, over an 8 foot wall, over the cargo net, hairpin turn and up over the cargo net again.  This was interesting since the net was literally being pulled in 4 directions at a any given moment.  Finally, there were 3 walls, each 5 foot, before the sprint to the finish!

Phew! See, there was a lot going on, and I know I missed a few things! 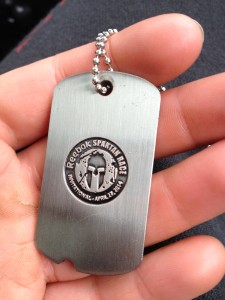 At the finish line we received an awesome dated dog tag and a dated unique Tshirt.  We also received a swag bag containing: one canister each of Spartan Fuel Energy, Recovery, and Refuel; a roll of Rock Tape; and Joe Desena’s book “Spartan (The F*ck) Up!” (I did censor the title…sorry kids!)

The race itself was really really great!  I would normally end here, but we still have a couple coupons to mention.

Food Coupon.  So there were 3 food vendors on sight, and this coupon bought you one food item from any of these 3 options.  I mainly focused on B.Good because they are so tasty!  If you were so inclined you could have requested a double chicken sandwich with lettuce, tomato, avocado, AND bacon on a bun…and you would also get water with that.  This was FREE!  I also saw a Paleo vendor (Paleo Power Meals), and then there was a 3rd vendor that honestly I have no idea what they were selling. Everyone was pretty much getting B.Good. 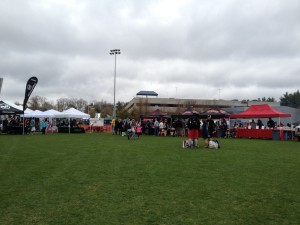 Reebok Coupon.  40% can go a long way if you play your card right.  This girl bought a new workout outfit (capris and a Tshirt) and a pair of Nanos.  Retail was just shy of $200, and I walked away spending less than the Nanos would have cost me all alone! WIN! 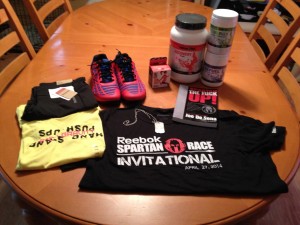 The really fun thing about this event:  SR wasn’t the only thing going on.  In addition there was a Crossfit Competition, so the festival area was geared toward both camps hence the healthy options. There was also a LesMills event going on near the Reebok Store.  It was as though Reebok was having a dance and there was mingling going on, willingly.  No event conflicted with the others, save for the loud speakers, but as long as you knew where to focus this wasn’t an issue,  everyone played nice and I enjoyed the atmosphere!