Last year, my wife and I ran this with a small contingent of Spahtens (see review here) and for the most part we really enjoyed it. There were things that needed to be worked on, but they were minimal compared to previous years. They struggled for some time with owners changing hands and all sorts of other stuff. That said, I went in with higher expectations than I should have based on last years event. 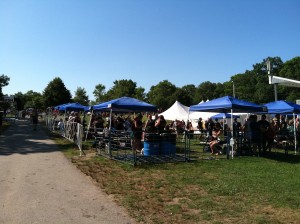 This year, owners changed hands again and there were some major issues.

PARKING: Being held at Barnstable Fairgrounds there was plenty of on-site parking and the bonus was, it was free! It was just a short walk across the street and into the race grounds.

REGISTRATION: This was pretty simple, no lines and no waiting. Sign the waiver, show your ID and get your packet. From there you walked over to get your shirt and pint glass. The shirt was tech-ish/ wicking material. I like it and will wear it out on runs. The pint glass was printed with Renegades logo and is a cool keep sake.

FESTIVAL AREA: Minus some tents for VIP’s you can’t call what they had as a festival area. There were no vendors, except our buddies over at ZooBells. I chatted with them for a bit, great guys! There was a table with some Dunkin Donuts coffee and some bagels, but that was about it. Lackluster at best. The DJ was just spinning normal race music, nothing overly awesome about that worth mentioning further. 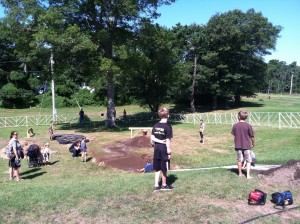 VOLUNTEERS: For the most part, there were plenty of them all over the course and they were all nice, no issues with their attitude and demeanor. But what I did see was numerous volunteers smoking cigarettes, on the course. One specifically was smoking in the corner of where the kids race/ area was. That is a huge no no!! Listen, I understand the addiction of nicotine, I really do. But if you really needed one that bad, ask for a break and go hit the parking lot or something. I coyly took photos if the RD doesn’t believe me!!

THE COURSE: Heats went off every half hour and were extremely small heats. This was great as there was no build-up at obstacles. I can’t say it was good for the race organizers, but hey I flew through the course. I didn’t expect massive elevation change or lots of hills being on the flatland of the Barnstable Fairgrounds on Cape Cod, but I think they could have used some more of the woods a bit better and got racers some diversity. Anyway, my son and I headed toward the starting line before our heat. I saw a good amount of younger kids running this, and Leah ran before us, so we decided to let Alex (10 years old) to run with me. 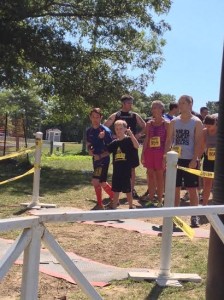 Leah had told me it was a “runners” course, the obstacles were spaced out quite a bit. The obstacles were not super challenging, and honestly, they were not creative at all. There were tons of pits dug out with dried out mud between them. It seems like they just drove a machine around and turned up the earth to call them obstacles. They put a few telephone poles between some berms, there were numerous short walls which could be vaulted with ease. Being the fairgrounds  they took some liberty with what was there and had racers weave up and down on a set of bleachers. There were tires to run though, not hanging, but just to high step through. The “coolest” obstacle was the cargo net climb at the very end of the race.

I don’t know what the distance was, but like I said, I ran it with my 10 year old and we completed it in 37 minutes. That included walking here and there because he has never gone a good distance like that. I’m confident I could have done this course in less than 30 minutes and I am not a 30 minute OCR runner!!

The bummer of all this is that I was hoping that by coming to the Cape that maybe they could have dazzled the locals and maybe, just maybe, more local races would be interested in coming out this way. Speaking with a bunch of newbies to OCR they felt that the course wasn’t too challenging and they felt like the running was overkill. Not sure if I will do a Renegade Playground again… It’s a shame, because the Loudon, NH event was so much fun.