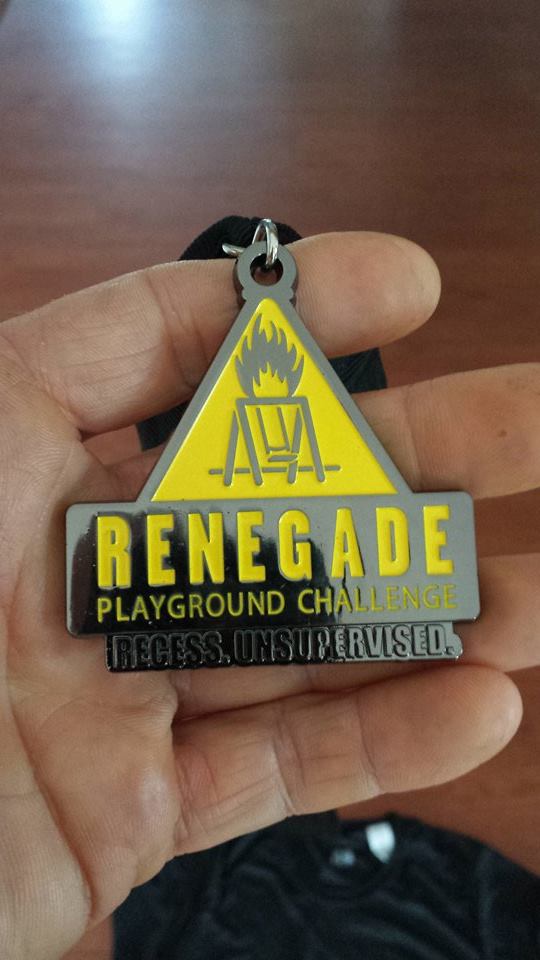 Editors Note: Robert Gagnon has ran many OCRs, both local and national, and is owner of Xtreme Fitness in Hampton, NH. He is also a member of the New England Spahtens Elite Team, and placed fifth overall at this event.

Parking: Parking was ample, well organized, on site and best of all FREE.

Facilities: The facilities were accommodating and totally adequate.

Check in: Check in was simple, organized and easy. I saw little to no lines and everyone seemed to know what they were doing.

Bag Check: They had a neat type of bag check where they had a mobile locker unit on site that was basically like the paid lockers you would see at ski resorts. Put your stuff in, put coins in, lock the door and take the key with you.

Wash Station: There was an adequate hose station for rinsing of. It was located on a paved area so once you were done hosing off, you were not stepping on muddy ground getting dirty again.

Changing station: There was a changing tent although I did not use it. I heard of no complaints about them. I do know some people used them (Dennis for one).

Bathrooms: There were not a ton of porta-potties, but I saw no lines so it seemed adequate.

Vendors: There did seem to be a couple vendors, but not many. One vendor had a corn hole game going and people seemed to be playing most of the day. 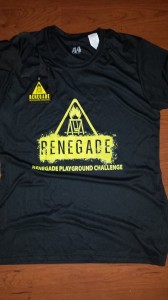 Schwag: The medals were upgraded this year and looked MUCH better than they ever have for RPC. The shirts were also upgraded to a nice tech fabric. They also gave a decent RPC pint glass. I saw a few instances of people randomly being given additional shirts, which they seemed to really like. They seemed to be pretty free with schwag so many people had no complaints about this and it was well received.

Race nutrition: Upon completing the race you were able to have bottled water and bananas and there was an ample supply

Beer: They purchased and provided Bud and Bud light, which seemed to not be too much of a hit (I don’t really drink so I didn’t care either way). Everyone was given 1 free beer. If you were on a team of 15 or more people you received 2 free beers and also got a team tent located very close to the beer garden (they called this VIP beer access).

Kids race: I was not able to check out the kids race but know they had one. I did preview the course and can say that it was designed pretty much EXACTLY as the adults course (style and difficulty level), but just on a small scale.

Volunteers: There seemed to be ample volunteers both on the course and in the “festival” area. Most o f them seemed to know what was going on and were reasonably well informed. The negative, many of them smoked cigarettes and did so while volunteering. In fact, the very first group of volunteers as you entered the event seemed to be smoking so your first impression for a running/fitness event was actually a bit of a turn off. MANY people I spoke to mentioned this and were put off by it. 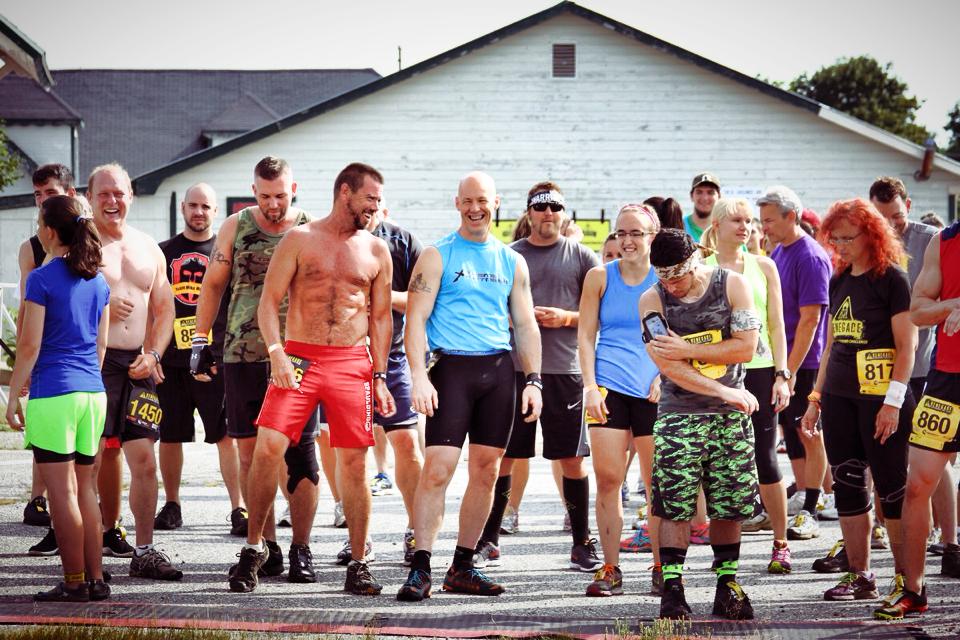 Distance: The first place finisher told me that his GPS had the race at 3.1 miles.

Terrain: Super flat. Although the race was an appropriate distance, they course designer decided not to take advantage of any of the woods that were part of the property. They elected to keep the entire race on the fairgrounds part of the property itself. The Rochester fair is technically a “state fair” so it has a very large open area that easily accommodated 3.1 miles of running, parking, and festivities area with room to spare. It IS very flat though so the running itself was basically easy which translated into a fast course (winning time was 22:30). Being a native of Rochester, I can say that there is also a fair amount of wooded property available but the course designer decided not to use them. My thoughts on why will be summarized at the end of the review.

Course marking: I found the course to be well marked and organized. I never came close to making a wrong turn and did not see or hear of anyone else having a problem either.

Difficulty: In some regards the course was difficult. It did have things that taxed you physically (soft sand and MANY mini dirt hills). From a technical stand point, the course was VERY simplistic and not difficult at all. Nothing really to mentally challenge or frighten for ANYONE. I saw a very small 7 year old boy complete the course. Shout out to you Calin! You ROCKED that course (finishing the last mile with just 1 shoe. He was so cute)!

Obstacles: There was a large A frame cargo net a bunch of 4’ & 5’ wooden walls (10 to 15 ish), 1 manmade wooden balance beam (with varying heights). 1 fixed height balance beam made by laying a telephone pole on the ground (over some dirt trenches) and 1 balance beam made from a log. There was a trench that you went down into that was filled with water and had 3 car tires hanging from ropes that you had to pass through. There were 2 large piles of hay bales that had to be navigated. There was a small wooden bridge that you went over at one part and then under at another time. This was ALL the wooden obstacles, NOTHING challenging, difficult or even really interesting. The A frame was really the best thing I guess. The ENTIRE rest of the course was comprised of MANY, MANY holes/trenches that were dug by a back hoe. The sand from the holes was piled up either at the beginning or end of the hole and required you to navigate over it. Frankly this WAS the course. This was what sucked the energy out of you. 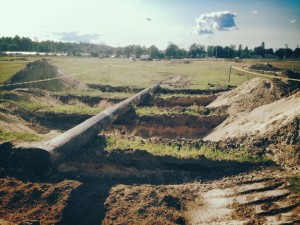 The sand/dirt was soft and required you to expend energy in order to get through it. Some of these holes had water that was about knee deep. One of the holes had a dirt pile that was about 15’ high and they put a .003 mil piece of plastic in an attempt to make a slide (with no water). I was the 2nd person going through at that point and when I stepped on the slide I ripped a HUGE hole in it and basically destroyed in immediately. I couldn’t even attempt to slide down it because it was dry and destroyed from the huge hole I put it it. So all in all, to me the course was a bit of a disappointment. I know what goes into building a course and this took very little effort when compared to other races. They could have made some tractor pulls or bucket carries but didn’t. They could have made some muddy barbed crawls but didn’t. 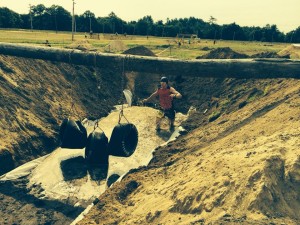 They could have used some of the more hilly, wooded terrain but didn’t. My opinion is that they didn’t do this because they didn’t want to put the effort into it as doing so does take effort. I have no doubt that all the holes were dug in about 1-2 days with a back hoe. They stuck out 10-15 pre made wooden walls and set up the A frame cargo net and the obstacles were basically complete. 2-3 days tops would be my guess. 1 day to mark the course and boom, call it good. Again, it was organized, properly staffed and well marked. It just seriously lacked effort. I cant tell you how many people expressed this opinion to me. I literally heard a 1st time OCR female say “I get dirtier running at the beach and found it to be little to no challenge”. She was scared going into this event, oops! :/

I have really mixed feelings about this. I support RPC and want to see them do well. Frankly they did a lot right here. I’ve seen many races do a worse job on many fronts. However the bottom line is that people come to race/run on a cool course and this just wasn’t it. C’mon a 7 year old did it ALONE! Even with all the things they did right, I have to unfortunately give this a below average rating. Sorry RPC!  Put more effort into your course design and build-out.  You are charging average industry prices, you need to put out an average product.  Not a bunch of holes in the ground.