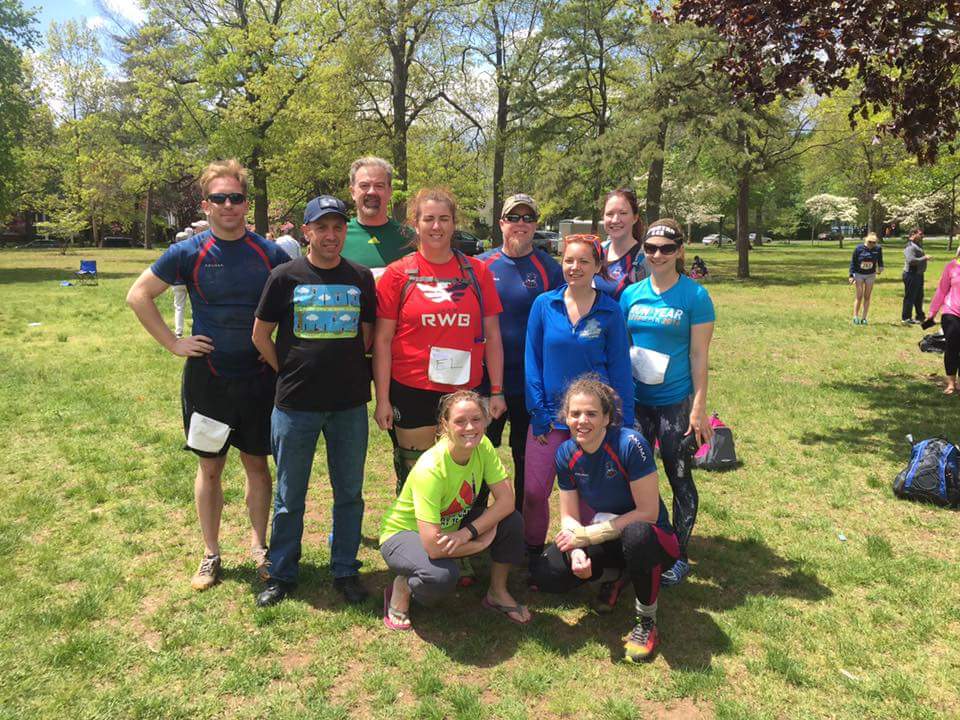 On the busiest day of the year for New England OCR, Amber Galindo pulled double duty, and sent me a review for Rock the Gauntlet also! Thank you, Amber! Photos courtesy of CT Now 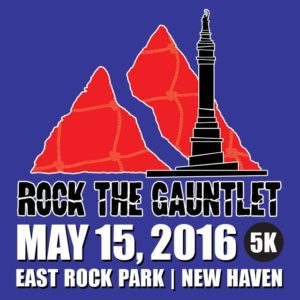 As I said in my other review of the weekend – the weekend of May 14-15, 2016 found many of us Spahtens facing the difficult choice of which race or races we wanted to choose from due to the overwhelming amount of options, not only #racelocal, but National as well. I chose Rock the Gauntlet in for my Sunday race – Part of #racelocal.
I didn’t know about Gauntlet races until I did the sister race, Run the Gauntlet in fall 2015. So this was my first time at this location.

Let’s start with the pre-event details. Communication about this race was great. I chose to use the deal to register for both races to get a discount back in March. Multi-lappers were requested far in advance (April 19) to email Amy Parulis from Denali if you were interested in multi-lapping. I emailed and asked my questions about if we could decide day of and Amy responded promptly that you could pay per lap or settle up at the end and decide day of – extra laps were a $10 donation to the Denali Foundation per lap. The initial communication said you could start with the waves which were 9, 10, and 11, so basically a limit of 3 laps. 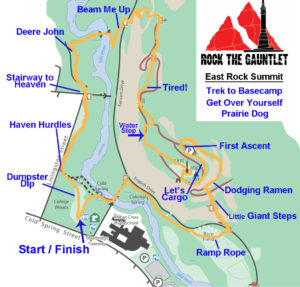 Before the race day details showed up, I couldn’t remember my registration time and since I wanted to multilap, I sent over an email. They responded very quickly and helped me out – great team over there. The race day details email showed up on May 12 with lots of details for where to park and what to expect. You could also look up your bib number in advance which helped at day of registration.

Parking was a few blocks away, but well-marked and easy to find. I walked down to the event and was able to easily find it, despite not knowing the area at all. You could hear the announcer already at 8 am and see the tents up in the event area. Registration was clearly marked and since I knew my bib number super easy. Got my bib, ankle timing chip, and my free t-shirt. Let me tell you – when it comes to t-shirts – the Gauntlet shirts are top of the line tech shirts. This event had lime green/neon yellow shirts and I can wait to wear it working out. It’s a good thing the shirts are so awesome, because for the other race bling whores like me out there (medal lovers unite!), there is no medal for this event. Kind of a bummer and the shirt makes up a little for it, but I still love me some medals. I would love for them to do it in the future. 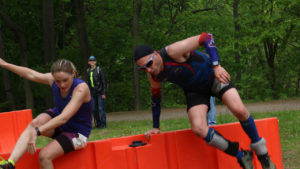 Based on the website pictures, I errantly expected a flat course. Looking back at the website, I’m literally just an idiot here, but nonetheless, when I was able to visually see the ‘hill’ we had to climb I was nervous after running Bold R Dash the day before, but met up with some fellow Spahtens who let me try on arm sleeves and drill shirts, and were crazy enough to way to multi-lap like me and very encouraging. It was a low, steady grade for the first half with a downhill back half of the course – very manageable they said.

A nice thing about Gauntlet races is they show you the course map and obstacles right on the website. It doesn’t describe the obstacles in detail, but gives you an idea, so at least I knew what to expect. 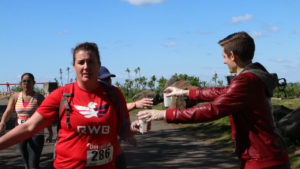 The start and finish lines are in the same place – literally – so if you are on the slow side, you might be finishing into the starting line of the next heat. However, it is a small race and has only three waves – 9 am, 10 am, and 11 am – so I’m not sure how much of a problem it truly was, but logistically it may have been easier for runners to just put them side by side. The line was also only marked with “Finish” flaps, so the announcer had to tell us where to line up.

For the multi-lappers, we were told in advance to head to the Denali tent and find Amy. To do multi-laps, we had to check in before starting out again and flip our bibs over and mark them “EL” (extra laps). We had the flexibility to pay for each lap or pay at the end. Also, Amy let multi-lappers put bags under her table since there isn’t a bag check available at this race. 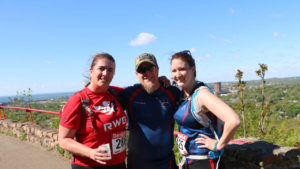 We lined up for the 9 am start time and it started a couple minutes late, but we were off. Thankfully another NE Spahten gave us the heads up that the first obstacle in the past was a climbing wall (Ramp Rope -1) that got a bit backed up, so we pushed ourselves pretty fast to try to minimize our wait. With that said, it was still a decent distance in and was found after a nice incline hill, and with the small overall race size and wave size, this did widdle down the volume a bit.

We did still have to wait. Also, this wall was about 8 feet tall, with a standard ^ shape, three cleats, and a rope – VERY easy for experienced races and easily doable for newbies. After that was more gradual uphill rail running. The next obstacle was part of the normal landscape trails called Little Big Steps (2) that involved climbing steep stone stairs up several flights worth. On subsequent laps I did experience a little back up here. You could fit two wide on the steps, you couldn’t pass those ahead of you so it could be slow going. 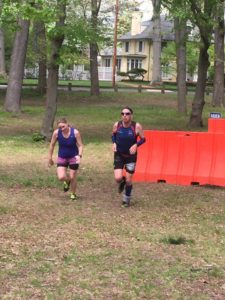 Next was a little level road running and into “Dodging Ramen” (3) which was a balance beam with pool noodles hanging over it. While not challenging, kind of fun in a goofy way. We ran on the road a bit more and then headed back into the uphill inclined trails and saw some more stone steps. They use the natural landscape again in “First Ascent” (4) which is more uphill incline, but nothing overly steep or awful and made for some nice trail scenery. It was pretty much single wide on the trail here, so it was a little slow going again.

We got out of the woods onto pavement and experienced what is labeled “Cargo Climb” (5), but was actually two wall climbs in a row with steps up to help and mats on the other side to help cushion the jump down.

The volunteers informed us we were almost to the top at this point, so we continued along the paved road until we reached the statue at the peak. Here we had to carry weighted backpacks (6) around the statue. I don’t see this listed on the obstacle map though. I believe they had multiple weighted backpacks that weren’t marked – I wouldn’t say anywhere heavy by any means, but on my 2nd lap I got an especially light pack.

Loop around the statue and then head back around to grass. Here were two more obstacles not on the map – a small climbing wall with a cleat for assistance (7) and then a tube to crawl through tube (8). 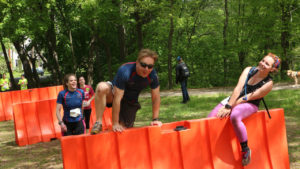 From there we were finally at the downhill and I was ecstatic. You start off on pavement and have breath taking views of the city. Here we found a water stop that was well staffed and then we went back to trails. Shortly after that was an obstacle pun-ily named “Tired” (9) that involved a span of tires laid flat on the ground to navigate. Then we were mostly back on the trail with a couple road crossings at a steady, minor decline with some switchbacks. I was able to pick up quite a bit of speed here and gain back some time. At this point the crowds were minimal too.

In the midst of the downhill we got to “Beam me up” (10) that was a straight and then angled balance beam and “Deere John” (11) that were three large tractor tires laid flat to climb over. 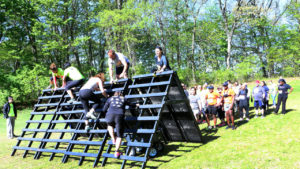 At this point were pretty much back to level ground and we were almost to the end. First was a cargo net that was probably the real “Let’s Cargo” (12), followed quickly by “Stairway to Heaven” (13) that was an inverted V shaped Jacobs ladder style obstacle, followed by “Haven Hurdles’ (14) which were orange traffic barrier style plastic, low hurdles to climb over, and culminating with my favorite obstacle of the event – “Dumpster Dip” which involved climbing into a low, long dumpster (hay bales to assist) filled with cool water and then climbing out – it was nice and refreshing on a warm day. From there it was a quick run to the finish. 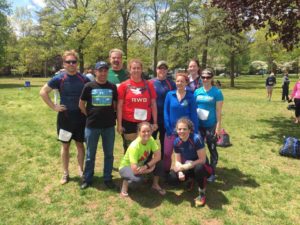 I got a personal best on lap one for a 5K obstacle course race which was exciting and surprising since I wasn’t try to – but the downhill trails helped a ton with that. My second lap still had beaten my personal best prior to this race too. We took our time by the third lap, but still finished well under an hour.

Final thoughts. This was a fun, easy race. I think it would be a great race for beginners, but it was also still fun and pleasant for experienced runners as well. While not challenging from a terrain or obstacle from for more experienced runners, the scenery and trails are still worth it – and if you are like me, you might get a PR.

Included with your registration is three slices of pizza and a beer. The pizza company that is here is awesome. Lots of choices and really good pizza. I didn’t try the beer, but didn’t hear any complaints. Our only complaint was that the beer company packed up and left pretty much at noon (1 hour after final lap) so that left some of the multi-lappers without beer. The pizza company was there still though.

I think the terrain of this course made it a little more challenging than its sister race – Run the Gauntlet – although the sand on the beach has its own challenges.

There were facilities on site for restrooms and several port-a-johns. I never had to wait for the bathroom which was nice when multilapping.

There were also lots of vendors on site – including one who makes bags out of race bibs – need to track them down – a couple shoe companies, and some others. One fun vendor that was here that was at the last Run event was a sock company that passes out number stickers to runners – if you find a runner with the matching number you each get a free pair of socks. I’m 0 for 2 here. Maybe at the Run the Gauntlet in the fall!

I would definitely do this race again – it’s great that it a #racelocal, it’s on the smaller side, and in a beautiful area. I really hope they consider medals in the future because let’s face it – I love my race bling.