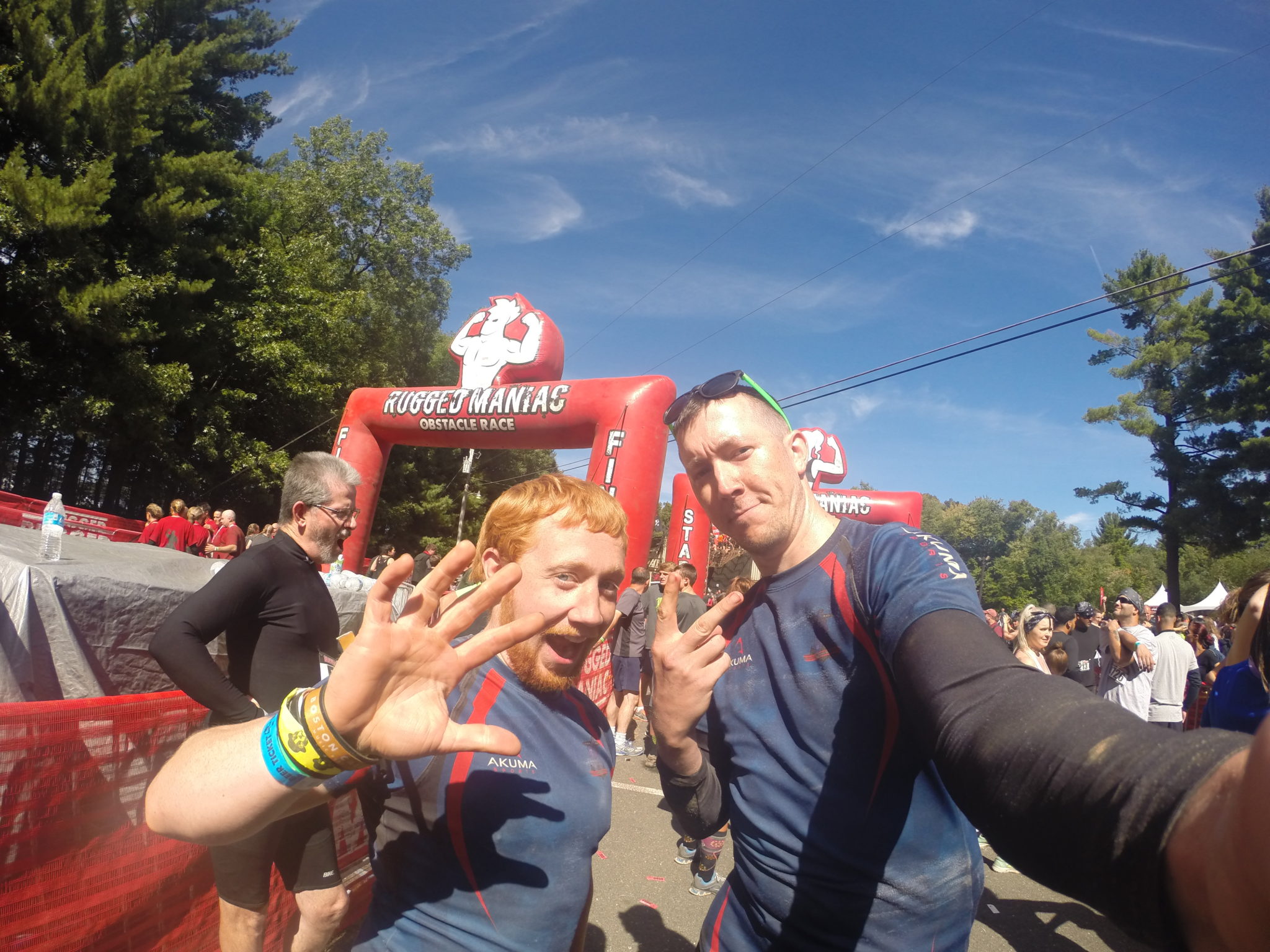 ”
Rugged Maniac is one of the staples in New England – ever since their first appearance, all the way back in 2010. With investment and high profile attention from Shark Tank, they stepped their game up massively in the last couple of years. Josh reports back on what they are like these days …”

Southwick, MA isn’t exactly a hotbed for the OCR community. The only time I’ve heard the name before was in reference to the Southwick Zoo. (editors note: they aren’t even slightly close to each other – nearly made that mistake once!) After this past weekend though, I’m thinking an annual trip to Southwick, MA may be in order as Rugged Maniac, the brainchild of Boston’s Rob Dickens and Brad Scudder, bankrolled by Shark Tank entrepreneur, Mark Cuban uses Southwick as the location for it’s flagship event. If you caught the episode of Shark Tank where the owners were pitching Rugged Maniac, they struggled to differentiate their product from the likes of Tough Mudder and Warrior Dash. I shared the same mindset but the old adage stands tall — “Don’t knock it ’til you try it.” 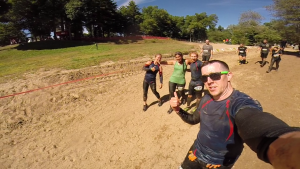 Rugged Maniac was held at Motocross 338, an outdoor motocross/ATV track and terrain course. Seemingly a perfect fit for an obstacle course event as you’ve already got a pre-carved out track, built in obstacles, and a spectator seating. Arrival was easy, as parking was right nearby, organized neatly across the nearby baseball fields (sorry for driving over your pitchers mound!) The standard $10 parking fee was.. well.. standard.

The festival area surrounded you quickly as you walked under the cargo net bridge to enter it. Crowds were gathered at the starting corral, as well as the warped wall where spectators and racers alike cheered on runners to get up that slanted beast – the mark of a good festival area is one where everyone feels like they’re part of the event, not just occupying space while they try and keep their eardrums from bursting from some local DJ’s desire to pump techno at 8am. No, Rugged had their festival area well organized, and packed in well enough to be convenient. The layout made perfect sense. Registration table and check in were well done, and here’s why. You show up and sign in, they give you the next bib number in line. No worrying about getting your bib numbers before the event or bugging your friends on Facebook about why they aren’t posted on the website yet. Timing chips on some pesky little bracelet that you need to bug Mama Hen to trim for you? Nope. A disposable timing tab that you can attach to your shoe, or slip inside your sock. Once I put it there, I immediately forgot about it, that’s the sign of a perfect piece of race gear. Once I was ready to go, I needed to stow my gear – guess what? Bag check was FREE. Self service too. Pop in to drop stuff off. Forget to put sunscreen on, white boy? That’s fine, pop back in and apply! And the best part? Rugged even gives you a clear plastic bag to store all your dirty gear in, so as not to ruin your car on the ride home. Small simple logistical choices by Rugged continued to impress, and I hadn’t even run yet.

Rugged does both timed and untimed versions of their races. For a small fee, you can run in one of the first waves of the day, and pit yourself against the other racers who paid a very easy to swallow $10, timing fee. I opted for a timed race, as I was interested to see what the competition was like at an event that wasn’t dominated by sponsored athletes and women who could curl my bodyweight. We filtered into the starting corral and were greeted with the typical hype-man intro, motivation music (props to the techno Imperial March track choice), and countdown to race time. I will also add, that your wave started EXACTLY as advertised. They had a clock right at the starting line, and they stuck to it. Punctuality is a trait lacking in this industry. Rugged nailed it. 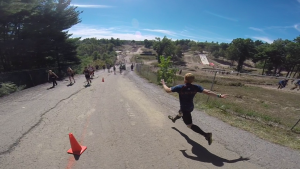 The clock struck 10:30a and we were off. Rugged boasts a 5K course, with 25 creative and fun obstacles. The course they have in Southwick is perfect for this. It’s a re-purposed motocross dirt track (it appears to be closed for those events according to their website) so you’re snaking back and forth past earlier and later runners, all while navigating some seriously fun obstacles. Rugged isn’t claiming to be Spartan Race. No huge gimmicky rigs, no giant inflatable mammoths. “Natural” obstacles like rolling hills, dirt mounds, tunnels to run and crawl under, and trails carving through the woods between open areas. Every race has one or two obstacles that others don’t. Spartan has the rope climb, Tough Mudder shocks you, but Rugged had TONS of obstacles that I loved and had never done before – obstacles that were more about having fun, than breaking you physically. Could it be that this could be a FUN OCR? Inconceivable! Or not – hold on while I jump off a ladder onto a trampoline, up to another ladder! Trampolines are fun! Or, let me run at full speed across these floating platforms! 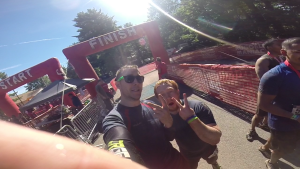 As one woman who was struggling to maintain her balance put it, “He’s like Jesus!” After that, it was jumping over a fire into a huge pool of water, then a giant slide, some barbed wire crawls, a balance beam with huge red balls to dodge, again, all super fun yet not overly taxing obstacles. There was a Wreck Bag carry that was more about proving that you could finish it, rather than questioning whether you should try or not. The hardest obstacle of the day had to be either the swinging rings over water, which claimed a few laughing bodies into the cold water below, or the slick wall, which was part of the final obstacle. Thankfully, with the good natured crowd that was at Rugged, there was always a willing helper, hoisting folks up that struggled. Myself, NES Ginger Ninja – Kevin Grant, and a few others staked out there, pulling folks up over the wall, just enjoying the atmosphere of people succeeding where they had previously had failed. 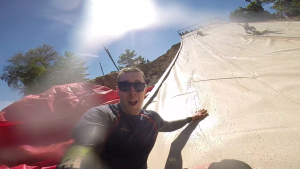 After crossing the finish line at Rugged, I found myself smiling, and compartmentalizing how truly fun the event actually was. I was ready to go again! But first – that age old tradition – post race beers! Rugged brings Harpoon beer into their festival, always a solid choice. They also compliment their festival area with great audience participation events such as, jousting, mechanical bullrides, a stein-hoisting competition (Yup – I definitely attempted that one), and all kinds of other things to keep you busy.

All in all – Rugged Maniac puts on a FUN obstacle course race. After a season of intense races, and a week removed from Killington, it was great to be reminded as to why we run these events – to have FUN. Rugged was a great time, managed by Staff who makes great racer-friendly decisions, and an atmosphere of folks who just want to have the same fun. Props to them – this Spahten will be back again. In fact, I already registered for 2016. Did I mention it only costs $39? Yup. See you there.