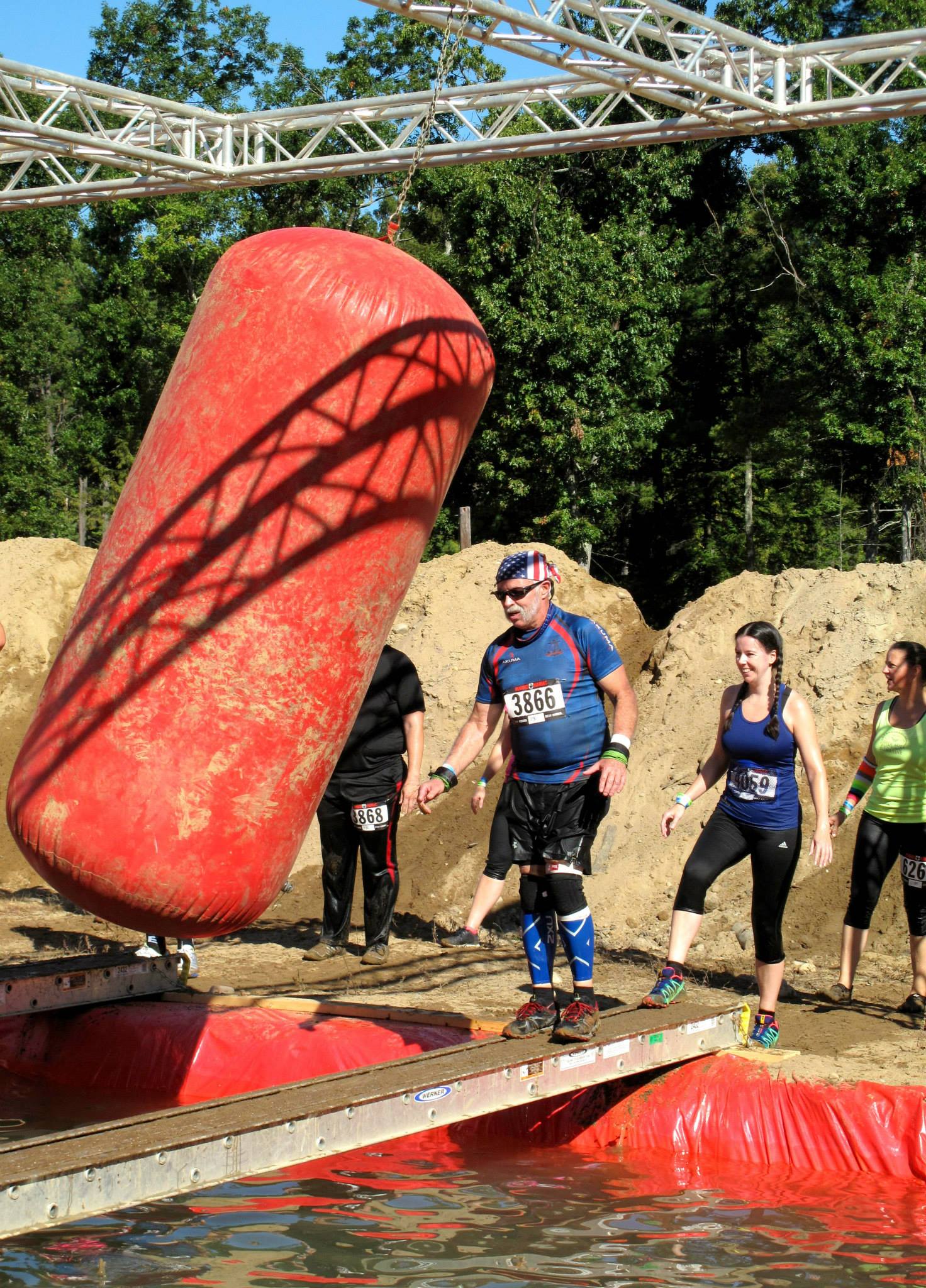 Editors Note: I ran Rugged Maniac in 2010, 2011 and 2012, skipping their 2013 and 2014 New England events as they hadn’t improved much in that time. Old Dog, Dennis tells us how they have changed in 2014, mostly due to big money from their Shark Tank influence – and now, I think they may be a great option on your calendar.

Venue/Parking/Festival/Registration
The event itself is held at a motocross track in Southwick, Massachusetts. This is a little off the beaten path, but easy to find with GPS or Google Maps. Parking is 10 dollars and this is one of the few events that I ALMOST don’t mind the parking fee. Plenty of volunteers directing traffic, plenty of porta-potties in the parking area, and there is an area they set aside for as close to “accessible” parking at event I’ve been at. Registration was handled quickly; you got your bib and a nice t-shirt; a separate table was set up to get your timing chip, if you chose to do so. Timing is an option at Rugged Maniac and if being timed is important to you, you will need to run in the first or second wave of the day. A FREE bag check which was right behind the registration area. Easy in and out, but they allow people access there area which is nice, but a word to the wise, it’s not secure, so don’t leave valuables in your bag. There is NO fee for spectators, everyone is welcome to come and watch and take part in the festival. The venue is very spectator friendly, the start/finish area of course, but there are multiple locations around the motocross track itself. The festival area itself is spacious and had a few vendors, at least one charity was setup, the military was represented, and a play area for the kids. Changing area is well set up, “showers” might be stretching the description, but hey, you can get clean enough to go drink your free Harpoon beer. Yes, Harpoon brought their IPA, Octoberfest, and White for our drinking pleasure. Food court is available, typical race food, burgers, hot dogs, etc. Merchandise tent for those folks who need more schwag and a tent where you could purchase your entry to the 2015 Rugged Maniac for less than 40 bucks. There was a beer stein holding contest at different times of the day. A mechanical bull was setup for those who cared to try their luck. I think there might be a video of someone who did so, somewhere. 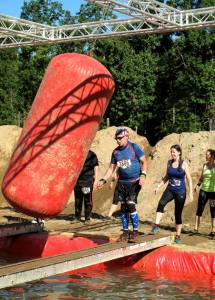 Course/Obstacles
http://www.ruggedmaniac.com/obstacles/
This is an obstacle rich course. I’m not going to list or describe all of the obstacles. Look at the map and descriptions. It’s pretty accurate as to the layout and descriptions of the obstacles. The obstacles were solidly built, with enough challenge for all but not so difficult that your average weekend warrior felt outmatched at every turn. Rugged Maniac changed the course layout somewhat this year and added some new and creative obstacles as well. The Gauntlet, Anti-Gravity, Frog Hop, Ninja Escape and the Ringer were all added this year. They also added a Warped Wall to their signature Mount Maniac finishing obstacle. The Rugged Maniac’s Particle Accelerator is one of the best slides in any of the obstacle courses I’ve done. New England’s own Wreck Bag made an appearance at the Pack Mule, 25lb or 50lb, pick your poison, or grab 2 of the 50’s if you are feeling beastly. Not much mud, but plenty of muddy water. An obstacle rich course is a two-headed sword, there were minor delays and slowdowns at about half of the obstacles, 30 seconds to a minute was the most, except for a 5 minute or so wait at the Warped Wall. You also get a simple, yet strangely elegant finisher’s medal.

Overall
If you enjoy OCR, this is one of the events that you need to put on your calendar. I signed up for next year already, and the company appears stable enough that I feel comfortable in giving them my money a year in advance. In case you aren’t aware, this is the series that Mark Cuban of Shark Tank fame, as well as the owner of the Dallas Mavericks, among other entertainment holdings has invested in. Rugged Maniac definitely stepped up their game this year and I for one cannot wait until next season. I might just have to travel to one of their events outside of New England next year.