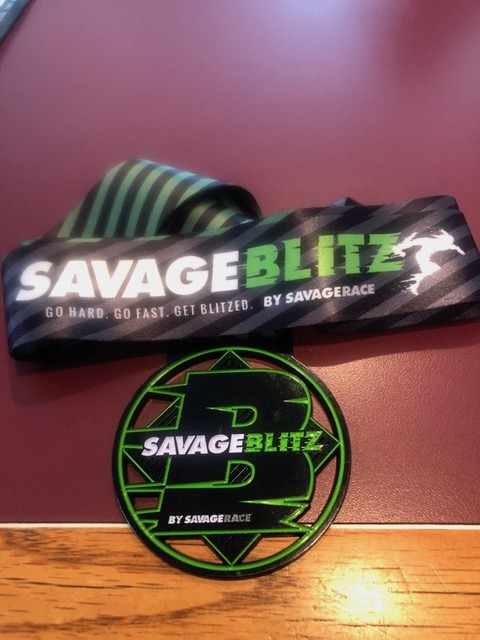 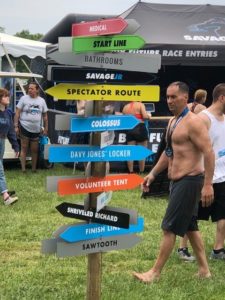 I had the opportunity to venture the 360 miles down to Savage Races Spring race two day event this past weekend at Hopkins Game Farm Kennedyville, Maryland. Location was easy to find, parking was plentiful and onsite for $10. At its farthest point the parking was about a five minute walk to the entrance/check in area. There was also a premium parking option for $20 and this got you within 100 feet or so of the entrance. Checking in was easy, with no large backups, and then you are directed through the merchandise tent to the festival area. The festival area was a perfect size for the approximate 3200 finishers and their spectators that were there throughout the day Saturday. However, it felt almost empty on Sunday with only about 650 finishers and respective spectators of the inaugural Blitz race. Looking around you had the start line, a small platinum rig, the awards stage with a DJ/emcee, and last obstacle/finish line at one end, then at the other end you had the port-o-johns, two BBQ vendors, a healthy/nutritional food truck, and a shaved ice vendor. To fill in the outer perimeter of the festival, in between these two ends, were the beer tent, an AIR FORCE table, Maryland National Guard table, a Maryland Air National Guard table, the Savage Syndicate tent, future race purchase tent, and a gear drop off tent. In the open area was found numerous round tables with chairs to sit at. The area was well thought out and funneled everyone’s attention to the far left in the direction of the start/finish and the DJ. 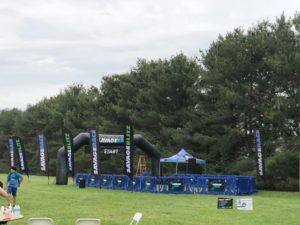 Our start time was at 10:20am, and we had three New England Spahtens make the journey to race. We were let in the starting corral about ten minutes early and they had a hype man get everyone ready for the race. After a warm-up, hyped out speech, and a 10 second countdown, we were sent off to tackle the course. The terrain is not what most from New England would expect, open flat fields, very few single tracks thru the woods. We ran for about half a mile before we encountered our first obstacle and never went that far in between after that. One thing this course does have that we do not is slow flowing river beads. These were used on several occasions. The full race clocked in at around 6.5 miles on my Garmin, just as advertised. Not too long and not too short. 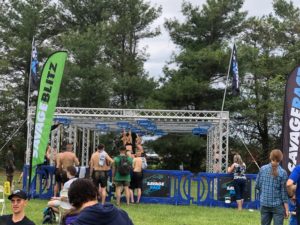 The obstacles, thirty in all, were all well built and sturdy. We got to see many of the obstacles that were in Massachusetts last year including Shriveled Richard (HEHE), Big Cheese, Saw Tooth , Twirly Bird, and Davy Jones Locker among others. We also got to experience three new obstacles just introduced this year. Holy Sheets, literally a rolled up sheet traverse to four hanging balls. Pedal to the Medal, a tire drag with a twist, you lay on your back and using only your feet you “roll” in the tire. When done drag it back out to the line. And battering ram, which was the obstacle in the finishing area, and I find this obstacle is hard to explain, but as best as I may, you are suspended from a pipe via a handle and you need to shimmy down the length of pipe to make a transition to another handle and then do it all over again to a bell (which you could kick). After completion, this brought you to crossing the finish line to get your Savage race medal, which is a new design for this year, your finisher t-shirt, water, and a Trimino protein water.

We hung around for a while watching the start line, cheering on finishers, and generally listening to the music. We cleaned up, had our beer, three options were available with your participant ticket, Coors, and for a $1 up charge you could have a Blue Moon or Dos Equis. We left with smiles on our faces, knowing we were returning the next day to participate in the first of its kind race, the Savage Blitz. 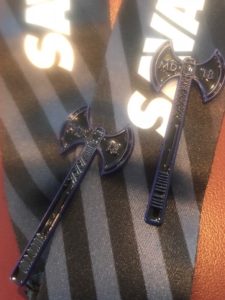 When was the last time you got to do an inaugural race? When we arrived at the venue on Sunday we got to do just that. We were two of 640 participants in Savage Races new series called the Savage Blitz, a shortened version of their course. We arrived a little later than we did on Saturday, knowing that there would be less people. While getting ready we saw the top three males and the top female cross the finish line. After that, we finished getting ready and went out with our 10am start time. The Blitz race wound us around the venue in a new way than Saturday, much to my surprise, and it was fun doing some obstacles backwards from the previous day. It made you really have to wrap your head around the technique first, at least for me. The course was just over three miles by my Garmin, and it was perfect. This being what appears to be a gateway into the full Savage Race, most of the big daunting obstacles were missing, like Colossus and Davey Jones, but you did get to run by all of them and see what could have been. The three new obstacles were still on course and fun again. 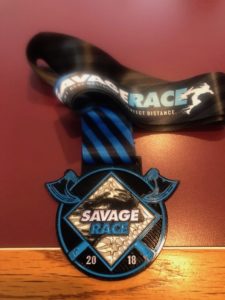 Crossing the finish line for the second time in two days was amazing. Picked up our new Savage Blitz medal, Blitz specific finishers t-shirts, a water, more Trimino, and headed over to the Syndicate tent to pick up our huge (did I mention HUGE) Syndicate medal and state Axe pins. Grabbed our beers, watched some more people finish the race with huge smiles, cleaned up and made the seven hour ride home to Massachusetts.

This was one hell of a weekend! The full course was fun, and challenging at the same time. The Blitz course was great. Hopefully they will roll this out at all venues next year. Savage Race does a great job at paying attention to what racers want. Sam Abbitt, one of the cofounders of Savage, is very active on the Syndicate facebook page and is listening. I give both Races an A+, for fun factor and quality.
So New England where will you be on July 14t​ h​? I know where I will be, at Carter and Stevens Farm, running the Savage race. I hope to see you all there.