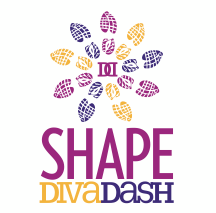 Diva Dash was yet another obstacle course race held this weekend – with the catch that it was a women’s only event. One of the better sponsored races out there, with women’s athletic clothing line, Athleta being a major sponsor, and Shape magazine being a title sponsor – they have a lot of big names behind them.

In a similar way to saying that a Warrior Dash is like a Spartan Beast – Diva Dash tends to attract people who are new to this sport, and want to have fun with their girlfriends more than they want to really test their abilities or set a good time – which isn’t inherently wrong, as long as you know what to expect going in.

Spahten Naomi took part, and provided us with some more detail on the event.

The Diva Dash was my fourth OCR.  Rebel 2012, Amesbury Sprint 2013 and of course FIT Challenge.

Diva Dash was a fun girls day out. We had a chilly 9 am wave Sat. They had some of the standard obstacles; monkey bars (for an all ladies race why the bars were not smaller in circumference and closer together is beyond me), run up and over a stack of hay bales, crawl over a stack of tires, climb three 8 foot walls (not solid walls, but walls with spaces), jump or climb over four sets of plastic jersey barriers and run up and over a seesaw. We didn’t lift or drag anything around. The biggest challenge for most was when we had to run straight for a bit, which was half on paved areas. They did not have water obstacles as stated in on the website, this was disappointing, as I knew they didn’t have mud or fire. I was hoping for some water at least.

The obstacles were safe and the event put together well. They had several vendors with free samples, always exciting to try new sports nutrition things for free. It was fairly easy, but I expected that. I had seven ladies with me who had never done anything like that before. They all finished and had fun. A few are talking about doing other OC races which is encouraging.

The course could have used a few more obstacles to break it up, I am not sure that it was a full 5K (how can you finish even any easy ORC in your road race 5K time) and the free wine at the end was a shot of wine not a glass.

Overall a fun safe day, but not really a challenge for me anyway.