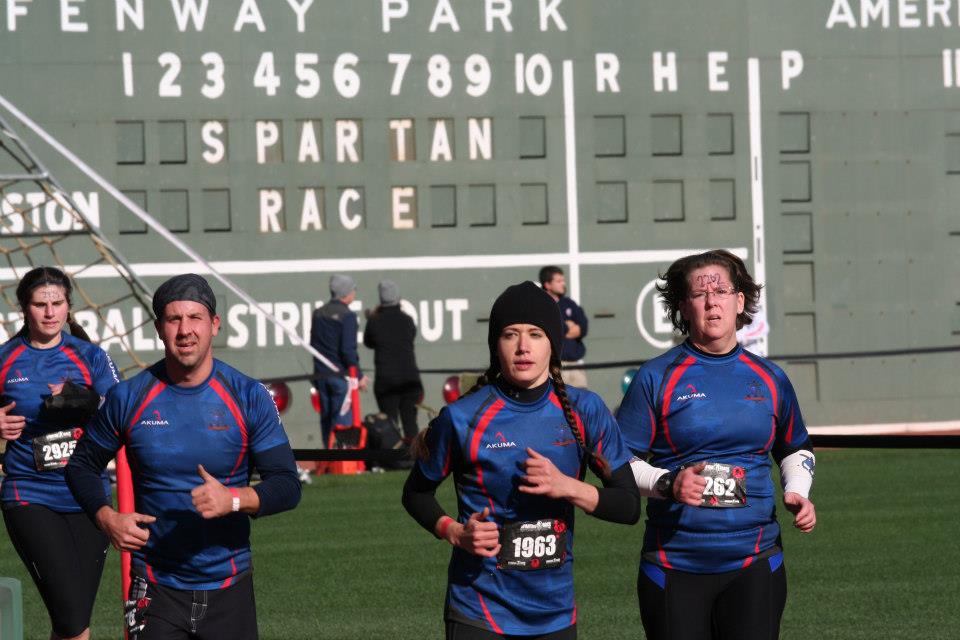 Spartan Race have been promoting and talking up the Fenway Park stadium event for some time – this was a two day “Time Trial” event, entirely contained in the confines of the oldest baseball stadium, on the year of their 100th birthday, and I’ll admit, right up until I saw the feedback coming in from the Saturday runners, I was skeptical. See, I’m an expat, and have zero relationship or history or interest in baseball, the Red Sox or Fenway – to me, it sounded cramped, busy and gimmicky.

I am happy to say, I was wrong. Spartan did this one right. I ran Sunday, and brought my wife and my dad along, and met up with a good group of New England Spahtens, both before, after and on the course. I ran 1 and three quarter laps – with my first 11:30am heat finishing with a 54min finish time, and my second 1:30pm wave ending when I rolled an ankle on the jump ropes – sending me on my first ride to the medics. Ice pack, ibuprofin, and I can walk on it today – seems to be just a sprain.

Fenway Park – clearly very easy to find. Less easy to park. We took the Riverside green line into town – and in both directions it was easy, reliable and got us where we wanted to be with far less fuss than I expected. Once you arrived at Fenway – they had the check-in booths and merchandise stand in a parking lot across from Gate D, which helped keep one of the big bottle necks of the weekend away from the event itself. For us, it was a simple process – running very smoothly. They did have the wrong names on our packets, but the bib numbers were all that mattered. Right here we also found the innov-8 stand, merch stand and race day info tent.

Once we were bibbed up, we headed over the street to Gate A – they did a bag search, tagged us, and let us into Fenway. This was my first experience in the ballpark, and my first thought was how cold it was – the concrete surrounding us had kept the ambient temperature lower than it was outside, in November, in New England. We got walking to warm up, checked out the start line, finish shoot, and a few spectator viewing spots, before heading up into the stands. It was clear immediately – Spartan had made great use of the venue. Every inch of stairs, seats, viewing platforms, warm up tracks … all working well as an OCR. They had a very professional setup with multiple wireless cameras broadcasting to the jumbotron, so they were able to cut around the different obstacles and show you plenty of live footage.

My one big “huh?!” was that they didn’t (most likely *couldn’t*) use the grass itself. This huge patch of field, the iconic “baseball stadium” landmark was half covered, fenced off and unused. I’m sure this isn’t Spartans fault – they could have easily put some low impact stuff out there that wouldn’t have torn the precious grass up badly.

Given the obvious limitations of being in a cramped venue – Spartan did a great job of utilizing the space they had and marking the course well.

We all knew going in that this wasn’t going to be a typical Spartan Race. Information in the weeks prior had been confusing / limited – likely by design. Was it going to be a one mile race, or a full 5k sprint? How would they provide mud and water obstacles? How was the time trial start going to happen?

Lining up for the start, it was already clear this would be unusual. They were pulling folks out, ten at a time and lining them up. Some burpees or jumping jacks or other PT while they got the previous wave up the ramp – then you were off. This worked fairly well, and I definitely didn’t see a single bottle neck during two laps – but one complaint would be that the first obstacle – a ramp up with some low ropes to go under – the starting MC had folks at different times of day doing different things .. sometimes he let them run up, other times I saw two person “wheel barrows” – others, bear crawls. This needs to be consistent, especially considering the competitive nature of the Spartan series.

As usual, I won’t attempt an obstacle by obstacle review here – you can watch Jeff’s GoPro footage if you need reminding.

If I had to describe the obstacles though – it was like  Crossfit met Spartan. We went from PT style stations – row 500m’s in 2mins, do 20 hand release push ups, atlas stone carries with 15 burpees in the middle, ball slams – all the way through to very recognizable Spartan obstacles, the spear throw (missed both times), traverse wall (nailed it both times! first time ever!), cargo nets, big walls, the longest herculean hoist I’ve ever seen and the shortest rope climb I’ve ever seen.

Mostly, these PT stations went really well – the volunteers did a great job explaining them to folks who didn’t know what a hand release push up is, or how the ball slams worked – but there were some sticky points. The rowers were set to all kinds of different difficulties – I don’t know how someone was expected to hit 500m in 2mins when the resistance was set to 1 or 2 – and no one was moving down the line resetting them all to a much more sensible 5 or 6 (I did that myself the second time through, and got it with TONS of spare time). The ball throw – there simply to incorporate baseballs – was a carnival game, but you didn’t win a fluffy animal. I personally got taken out by the jump ropes – and heard from the medics that a lot of other folks had joined me that day – it was probably the most casualty causing obstacle all day, purely because it was such an easy obstacle to be injured by – one mis-step and you were rolling your ankle in ways it shouldn’t go, and game over.

Of course, Spartan put on great obstacles and place them well – for those who made it through the ropes you immediately faced the most epic Hobie Hop ever – up 5 or 6 flights of stairs … there were many folks walking this one in the end! The over / under / throughs that bracketed the rope climb and hoist were really well placed, and another Spartan staple.

Of course, the obstacle I loved to hate for the day – the damned sandbag carry. These were true sandbags, not the pancakes we’ve gotten used too. The route you had to carry them was long, winding, and went through the stairs, chairs, up and down – I had to rest more than a few times when I went through. Oh, and it was placed right at the end. Nice call, Spartan. nice call.

Of course – for many folks the race is as much about what you earn at the finish line and take home. Bragging rights.

The finishers T shirt – finally, Spartan have learned from feedback and provided a race specific shirt, and it looks awesome. Quality feels nice, but my XL is a bit of a frankensize – fits great in the shoulders, fits loose everywhere else. Still, I’m wearing it to the office – my “monday after a race” tradition 🙂

One real oddity – the race bibs included a beer ticket. Usual Spartan Race stuff … except the folks at the beer counter wouldn’t honor it – saying it was illegal to give away alchohol in the state … um, it’s not being given away – Spartan are buying. Of course, I’m sure the $8:50 per beer price tag had something to do with this …

Special mention to the Race Menu team – they had booths setup with touch screens to look up your times, then print them off immediately. This was awesome. So much better than the “piece of paper on the side of a tent” method! I really hope we see more of this.

This was a very *very* well run event. The whole day was slick, the time trial format worked well, the PT stations blended in fairly well with the usual Spartan obstacles. Rumor has it that there will be a specific Stadium Series for Spartan Race in the future, and judging by this, the very first one, it’ll be a huge success. It opens up the world of OCR to a new crowd (I saw many folks only there because of the venue, who loved the OCR itself in the end). Some small changes to the operations of some stations and this will be a huge draw for Spartan, and something their competition isn’t doing (yet) …

Also, check out our Team Reviews – and submit your own!