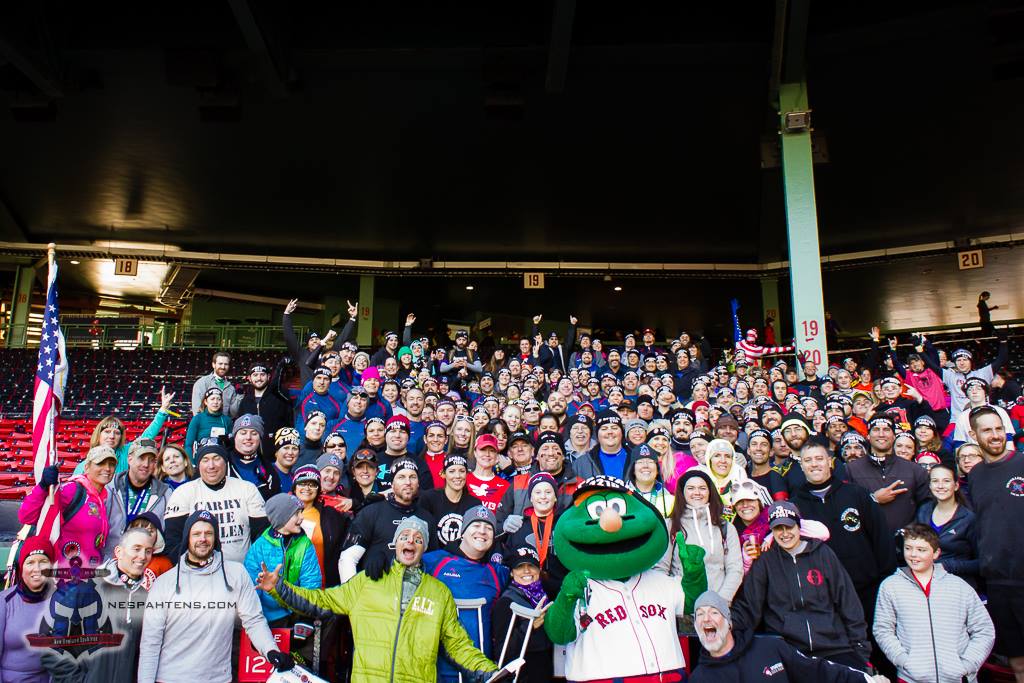 There, I said it. I’ve been the first to gripe when Spartan Race have dropped the ball up this year. I’ve had my moments when I’ve felt bored, let down, and frustrated by the series and what was the 2014 season. I’ve also been called out on it.

But, this weekend I hit the last Spartan Race of my calendar year season – the Stadium Sprint at Fenway Park – and I had a great time.

A huge part of this, as is pretty typical, is the community. The people who make up the New England Spahtens team wave, who hung out in the biggest team area, who high fived and hugged their way through the day – it’s because of YOU that Fenway was such a great experience for me.

It’s no secret that New England in November is cold. This weekend, it was especially cold – and the space that Spartan set aside for the team (the first time in three years – thank you for finally doing that for us!) was out in the seating, which had great views of the course – and screens showing several more sections of the course – but, it was exposed to the elements and in shade all day – we advised everyone to wrap up extra warm – and BIG thanks to everyone who came to spectate and didn’t get to run the course to warm up! 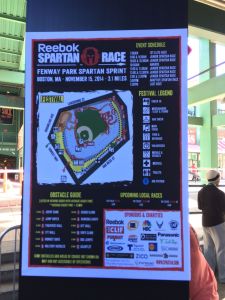 Also a first, Spartan had taken over the street outside – all of registration and check in was done in the road, instead of crammed into a parking lot – and it was nicely spread out, and SUPER smooth. I pre-signed my wavers and was through with my packet in minutes. No hassle, no sweat, no lines. Fenway security bag check was quick and effortless and we were into the crowded concourse. No fuss, no hassle.

Spartan merchandise was wisely vending outside, but the Panasonic booth, some local vendors – and 13,000 people made the concourse difficult to navigate at times. I used the Fenway food vendor once, and appreciated the warm, easy to grab fries prior to my wave, even if they were still charging ball park prices. It is what it is – heats were going all day, literally – 7am to 7:30pm – and at peak times there were a lot of people milling around.

After spending time hanging out with the best team in the world, 12:45 came around for our team wave. As is usual at a stadium race, they line you up based on your wave time, then filter you through in groups of 15 – sending you out every couple of minutes. I understand why they do this (course flow, space reasons), but when the “team wave” is mixed up with the earlier waves and later waves – random folks end up surrounded by NES members, generally very confused by whats going on.

And we were off!

As usual, I’m not going to try and map the course out – I’ll include the course map, and GoPro footage for that. 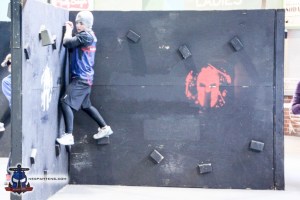 Stadium staples like the slam ball, hand release pushups, heavy jump ropes were present. The rowers were missing, which is a blessing or a curse (I liked them), and the spear throw is now tethered, which I consider a necessary modification, even if it’s not a popular one. Box jumps at the finish line and several good walls, including a seemingly 10’ version I made it up solo, thankfully!

We did see some innovation. The traverse wall is now built into three shorter pieces set at an angle with each other – something that is certainly tougher, but not new. The monkey bars were the usual tiered bars we’ve seen at the mud races, missing the slightly odd version from previous events. The new cargo net up the green walls into the stands was pretty awesome – I’ve always wondered why that hadn’t happened at Fenway – despite being caught in a pretty severe backlog at that point, and frankly a touch nervous with so many people on the net, it was a fun way to make more use in the stadium. 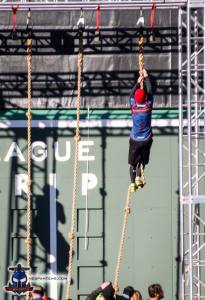 Finishing out the course with the “heavy” bags to replace the gladiator gauntlet – I say “heavy”, because my first experience of these at Citi Field, they truly were heavy bags and awesome, here they were just straw filled and presented little to no challenge as you ran to the finish line, and not particularly epic photos either – at least, I got none.

The distance felt a touch shorter than previous years, but we can’t really confirm that as GPS units fail miserably at stadium events – but you know, who cares if it was 2.8 or 3.2 miles in length? It was what it was, and we had a good time out there. Winning times were in the sub 30min range, and I was happy enough to break the 1h mark, considering how little training and gym time I’ve spent recently.

So, Fenway’s course ended up being a blast, the event was fantastic – but the key reason we had so much fun, is that it’s one of the few events that has a ton of social opportunities, as people don’t need to rush off and clean up, or go home, or go back to their car – and with so many places to eat, even when we had enough of the cold we still had the very best of company to hang out with.

And really – isn’t that why we do these races? 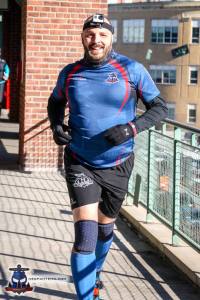 In 2010, I ran my first Spartan Race because I wanted an athletic, physical pursuit. In 2014 I ran my third Fenway because of the people I’ve met along that road – and even in this time when Spartan is facing somewhat of a reinvention of itself – it’s still the place we see the biggest congregation of the best people – and for that, I can’t thank the people who make the events happen enough – because it’s all about the people, really.

Spartan faces increasing competition from other parts of the OCR world, and has a delicate balance to meet – putting on innovative, challenging events that can still draw the huge crowds they need to stay in business and support themselves. It’s a daunting task that very few other events out there have to do, and certainly not week in week out.