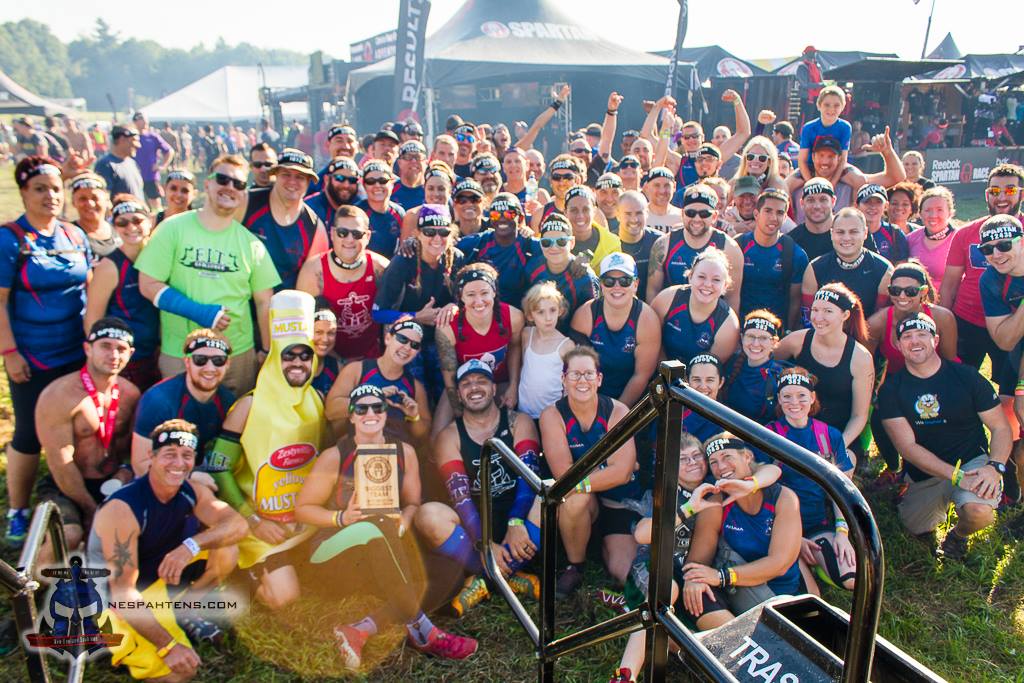 Editors note: Thank you to Sandy for handling this featured review for us! 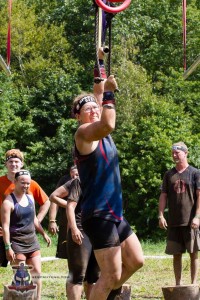 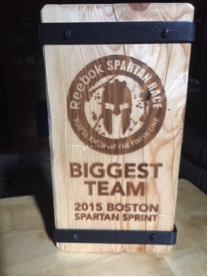 It’s always interesting to have different events at the same location. After the Spartan Super was held at Carter & Stevens Farm back in June, we heard a lot of complaints about the venue. Many thought it was no good because there isn’t much elevation change. Others thought it was too short. Some complained about the inevitable animal smells. Amazing what a difference can be made, at the same location, and even by the same company! Whereas the Super was a foul out, the Sprint comes in as a grand slam.
The New England Spahtens came out in force for the Spartan Sprint at Barre, MA. Between the two days, we had almost 450 registered with the team, plus countless volunteers who raced the same weekend and therefore didn’t hit the 14 day cut-off to be included in the biggest team numbers. 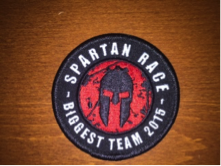 All told, I’m sure we were over 500 strong. Spartan has been taking care of their biggest teams this year and we were awarded the beautiful Biggest Team block both Saturday and Sunday. In addition, each person on the list was entitled to free bag check, one free spectator entry, and a Biggest Team patch. The ceremony at the sound stage was pretty lackluster, but that may have been due to some last minute changes in the staff. Either way, we received our prize and had our picture taken and it was time to race. 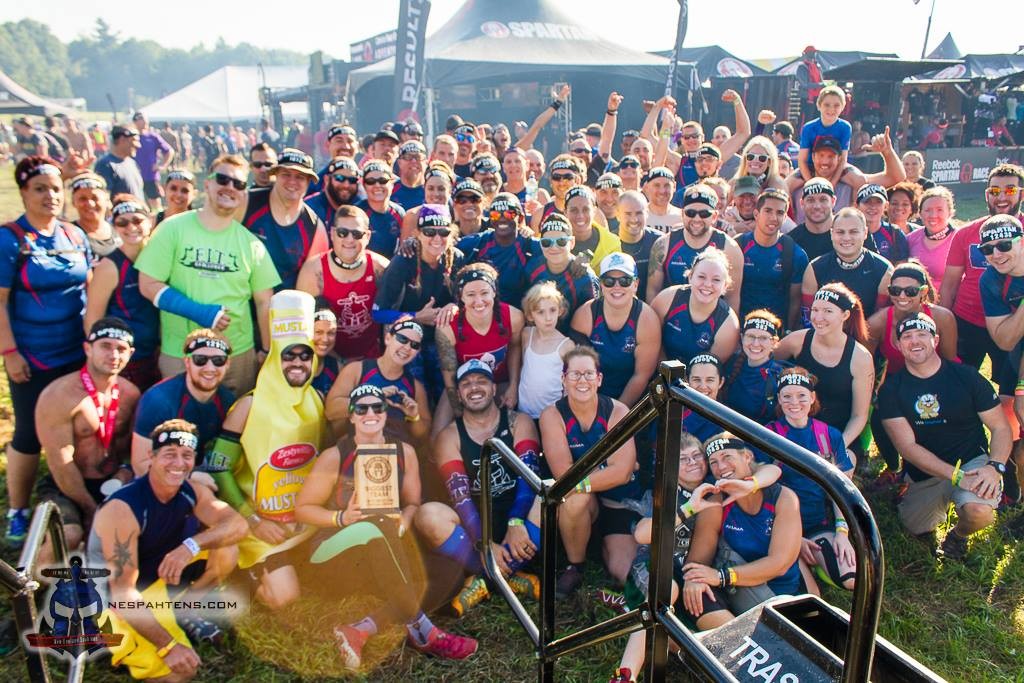 Carter & Stevens Farm is perfect for a Sprint distance event. This one showed up on most GPS trackers between 5.3 and 5.6 miles. Spartan hinted at 4.8 prior, so the total distance sounds about right once you factor in Spartan miles (they don’t tend to add the distances of carries, only the distances between obstacles.) 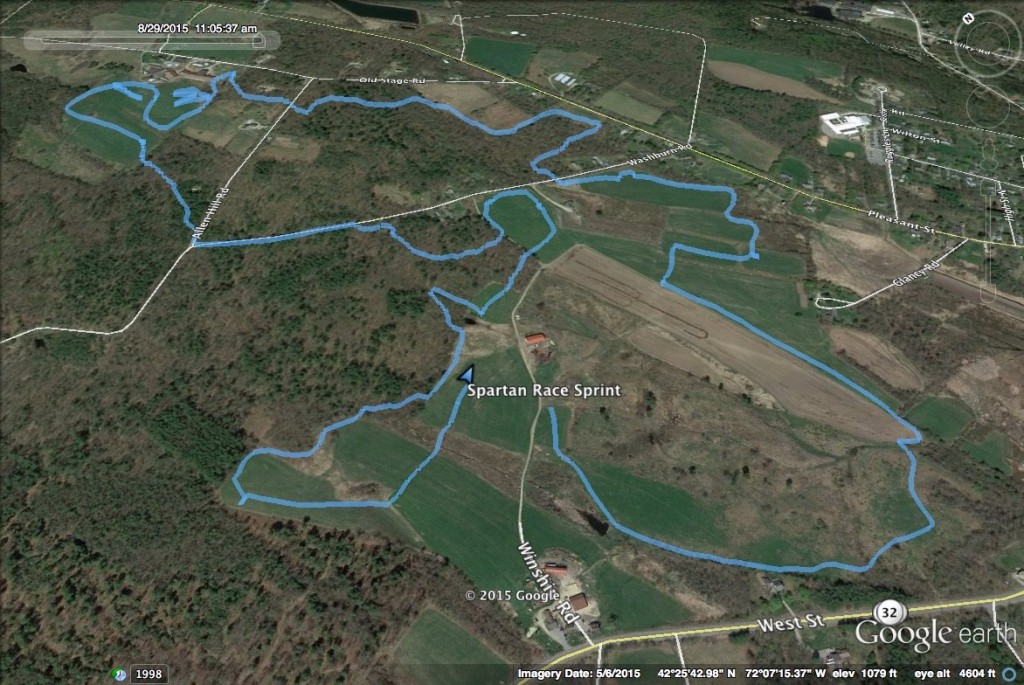 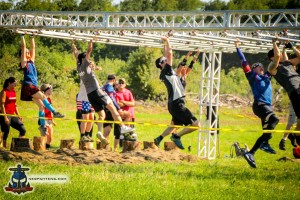 As far as obstacles go, I counted 25. If you treat the O-U-T (over, under, through) walls and the wall series (8’, 7’, 6’) individually, that count jumps to 29. Personally, I’m all about the obstacles, so this was wonderful for me. All their standard obstacles were there, including walls, atlas stone, monkey bars, pancake and bucket carries, and the slip wall. In addition, they had the Clif Multi-Bar Rig, a Farmer’s Log Carry, and the new interpretation of the Traverse Wall called the Z Wall. My favorite innovation of the day was on The Bridge. Instead of walking across planks at the top, they had stretched a cargo net made of strapping over the void. Personally, I LOVED that! I was able to walk across while some others I saw chose to crawl or roll. It allowed you to approach the obstacle at a different level than others around you. 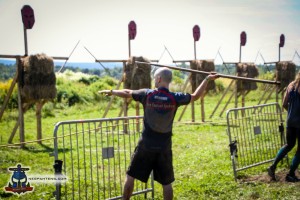 Every obstacle I saw was extremely well built. I saw nothing loose, nothing wobbly, etc. By late Sunday, the hay bales of the spear throw were starting to fall apart, but short of replacing them with new ones, I don’t think there was anything to be done about that. I heard after the fact that one of the ropes on the slip wall was loose, but this was not something I actually witnessed. The obstacles were a good mix of strength and technique. The carries and weighted obstacles such as the hoist trended on the heavy side. Many were relegated to burpees at the hoist because they just couldn’t get the bag to move. I like it when there is a balance between athletes – heavier athletes tend to do well on the hoist and heavy carries, while lighter athletes tend to breeze through the monkey bars and the rope climb. It’s difficult to be good at both without working really hard and that’s the way it should be in my opinion. 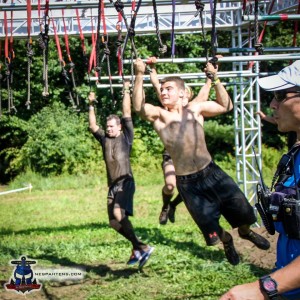 The only obstacle that I take any umbrage with is the Rig. This is a difficult obstacle for the majority of the field. In this race, it was a long pole followed by three knotted ropes followed by five rings – not easy for the vast majority of the 13,000 racers during the weekend. My disappointment comes because they decided that this already difficult obstacle needed to be made even more difficult by making the third rope significantly shorter and higher up than the other two. I may be wrong, but this seems a lot like Spartan laughing in the faces of many who are strong, but not quite strong enough. I do realize that it is the athletes’ responsibility to train harder, but would it have been so terrible to just make all three ropes the same length?   On the course, Spartan did a good job of keeping you guessing. Even though the course passed itself several times, you could never see it, only hear that people were just on the other side of a stand of trees or some such. This kept everything fresh and exciting. They could have just done switchbacks in a large field, but they didn’t. I appreciate that. It takes a lot better planning to accomplish, but the end result is worth it.
Spartan did well on the logistics of the race as well. I did not ride the shuttle bus, but heard from many that it was smooth with little to no waiting and friendly efficient drivers. Apparently, the seats were dirty on the ride back, but I think that is to be expected! Registration was easy and smooth, as was the free spectator sign in. I also did not use the bag check, but heard that it was also painless. Go up, give your name, free bag check for those on the Biggest Team list, $5 for everyone else. I heard that the showers ran out of water on Saturday afternoon for a while and that Spartan had to get another truck delivery of water. Unfortunately, this negatively affected a chunk of racers. Whereas I believe that Spartan should have back up water standing by in case, I also think that some people treat the water as infinitely available and waste a lot washing their clothes and shoes. I think we should educate people that it is a rinse station, not a shower station and they should be conservative with their use. I also think there should be a back up just in case. 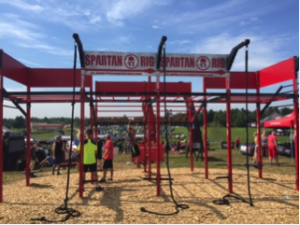 The festival area for this race was top notch. Never have I seen so many different things to do at a race. For the athletic, they had a Spartan Rig set up with contests periodically, a slack line, a couple of pull up bars, a few ropes to climb, and a company called Mobile Fitness Equipment who basically had a full gym in a small shipping container. For those looking to purchase stuff, Panasonic, TomTom, Trigger-Pin, and the Spartan Merchandise tents were all there. Food was offered from three different vendors – Carter & Stevens had their own stand open with sandwiches, corn on the cob, and ice cream; Firefly’s was there with BBQ, burgers, salads, and fresh fruit; and Heal Thee Smoothees had, you guessed it, smoothies. 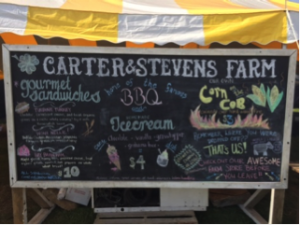 It was great to see the healthy options available! Spartan had Shock Top beer available for the free bear tickets, but there also was water, Gatorade, lemonade, mint lemonade, basil lemonade, and ice tea available for non-drinkers and those underage. Finally, Organic Valley had their milk protein recovery shakes. Each runner got their choice of vanilla or chocolate at the finish line along with water, a banana, and a Clif Builder Bar. For those wanting more, they could visit the Organic Valley booth and pick up drinks and coupons for $1.25 off. The Mobile Locker Co was onsite to offer everyone an alternative to the once in/once out bag check. You could rent a locker for the day and have unlimited access to your belongings. Lockers were available in four sizes for varying costs.

Overall, I think Spartan knocked this one out of the park. The course was good. The obstacles were varied and well built. The logistics ran smoothly.

We’d love to hear your opinion. Please take a few minutes to complete your own review at http://www.newenglandspahtens.com/submit-a-race-review/.