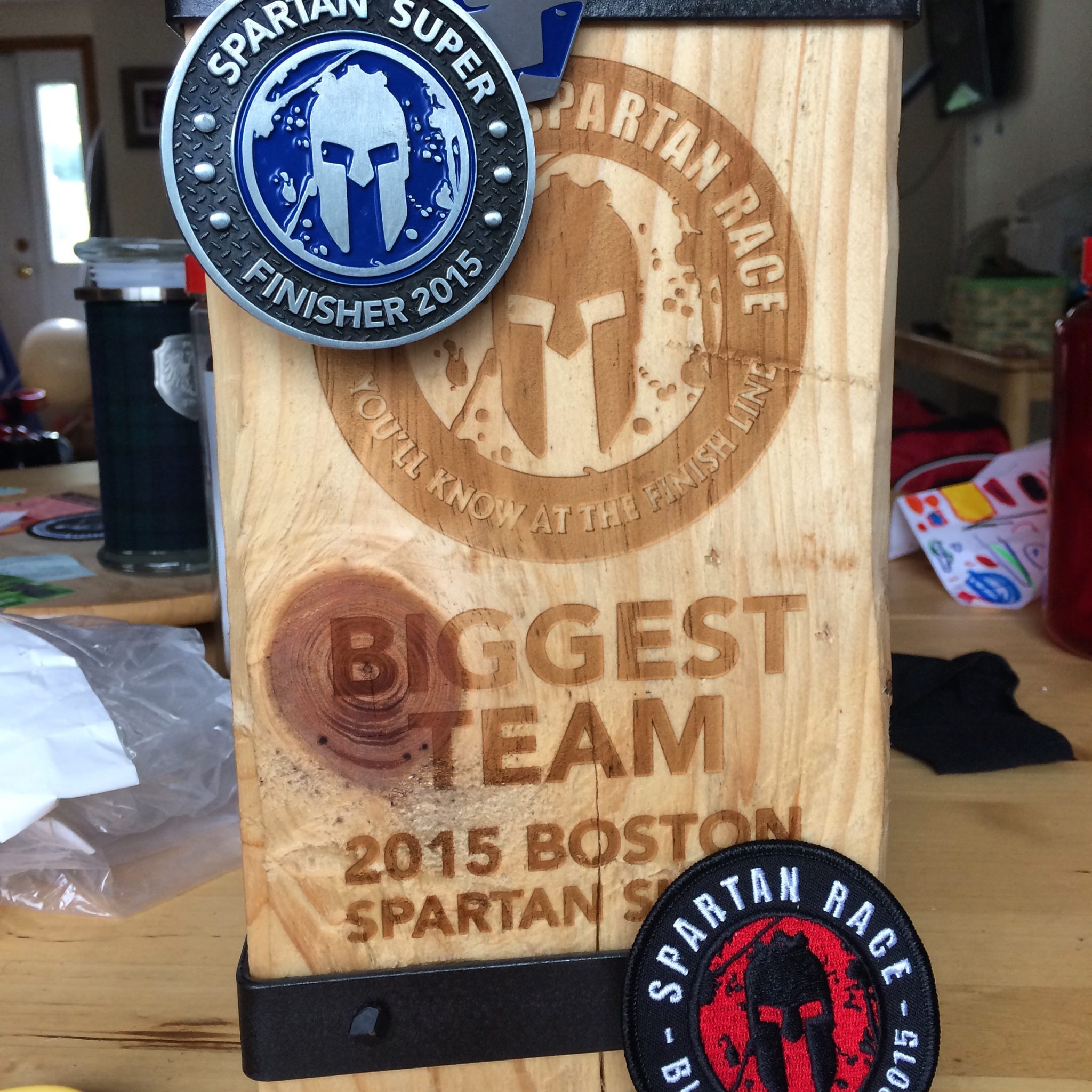 I can’t call it the Boston Super. I just can’t. Events that are nearly an hour and a half from the city are not in the metro area – so, this is the MA Super.

And about time too – we’ve been waiting for our own Super for years now, and for 2015, Spartan finally brought one! No more driving to New Jersey!

The venue, Carter and Stevens farm is in Barre – right in central MA and tricky to get to from any highway. Fortunately for me, it’s ten miles from my house, so of course, I think the venue is AHMAHZING and want every race, ever, to be here. Like, all of them, so if you Race Director types could get on that, it would be swell.

Being so close, I’d actually taken a day off work earlier in the week to help with festival build – spending the whole day with some cool peeps putting up tents and installing the bag check racks (which tried to kill me) – and if you ever want to get an idea of just how HUGE the production that is Spartan Race really is, go and do a build day. The sheer scale of work to be done, and people on staff to do it will blow you away and certainly gave me a new appreciation for what goes on behind a race the size of Spartan.

As is common these days, parking was handled off site, a short drive by school bus away, and $10. The field was perfectly fine and accessible on Saturday with the sun out, but I hear it was a boggy messy sloppy train wreck on Sunday with the rains. To be expected! I was arriving early and had zero wait time for parking or to get a bus. Very well handled. Potties in the parking lot were appreciated by those with longer drives, I’m sure!

Once shuttled across Barre, and dropped off at the venue, the walk to registration was short, and checkin was smooth. Without any fuss, I was in the venue and heading over to the Biggest Team tent to hang with my New England Spahtens 🙂

The festival was a very standard Spartan Race festival – bag check, merchandise trailer, sound stage, start and finish lines, several tents for shade and a handful of sponsors – well laid out, rarely felt crowded and I had very few points where I had to wait for anything. By now, Spartan have the logistics of this stuff pretty much nailed, and barring any major catastrophe, it goes smooth and pleasant. We put banners and flags up on the team tent to stake our claim and settled into a hand shaking and meeting new folks mode – I know I met SO MANY new people, and I hope no one is offended when I don’t remember your names and faces in the future – I lost count how many people said “we met at …” and nope, nothing. Sorry!!

Carter and Stevens farm is a huge working cow farm. So despite having huge amounts of space, it has little in the way of elevation change – this was not to be a challenging, hilly race. Coming into the weekend, the reports from volunteers told of incredibly uneven ground, tall grass and lots of ticks. After a while, it started to feel like the biggest obstacle we’d face would be ticks … the farm was also vending food, which I loved to see. Locally sourced food options, health eating options – the “Whoa Nellie” wrap was fantastic – after four years of fried everything at the Sports Park, I very much enjoyed that we could get everything from grass fed local burgers, to wheat wraps, to punnets of hand picked strawberries. Very nice touch!

Biggest Team perk meant we could put our bags into the VIP bag check, for free – which removed any wait time, and I knew my bag was secure. I also picked up my first Biggest Team patch, and with very little time to spare, the MC announced us as biggest team – Sandy gave an awesome speech, we received our Biggest Team block, and had some pro-photos taken. We then had to high tail it to the start line to make our wave – some people missing it, even.

One comment for HQ – PLEASE get better at scheduling this. On Saturday, we barely managed to get it done before our AM wave time – but on Sunday, for some inexplicable reason, despite being asked more than once, this award didn’t happen until much later in the afternoon, after almost everyone was on course for the PM wave, or had already gone home. We couldn’t even pick up the patches for distribution. It’s a really REALLY small adjustment to get this done as early in the day as feasibly possible, and one that directly affects hundreds of people. We want this to happen – we appreciate the shout out and the acknowledgment, but please help us out!

You’ve conquered the Super. Time to dominate the Sprint: http://sprtn.im/BostonSprint!

The course – this is the piece that we’re here for, naturally. Like any review, I can only compare it to my past experiences of running the New Jersey Super for the past three years, my only Super experiences – and comparing it to similar distance events from other series – it’s worth pointing out that for many, this was the hardest thing they’ve ever done, and if you ran in the rain and soupy mud on Sunday, you had an entirely different experience. Regardless of what *I* think, congratulations to anyone and everyone who pushed themselves to a new level, earned the blue medal and is proud of their experience! Big shout out to Shouty Ninja for being my Battle Buddy!

The usual start line wall jump, “who am I?” speech, and charge over the timing matts will never get old – and we were off into the course. I never try to do an obstacle by obstacle break down, so I’ll touch on what I thought were highs, and lows.

Everything has been redesigned. In the past, walls were always constructed with wooden uprights, and volunteers would have to holler to keep people off them – this year, they switched them out for some strapping – no standing on these suckers, which the shorter people weren’t too impressed, but I liked it. I did not like the wider lip though – forearm bruises for days.

In general, there were no surprises on the course. A sandbag carry (remember the days when those pancakes felt incredibly heavy?) and a heavy bucket carry that didn’t have too much enforcement going on around the fill level. Some over/under/through walls and a long grassy wire crawl that bit me on the head. Rolling mud was sloppy on Saturday (I can only imagine Sunday!) and the dunk wall had about a 1’ gap I could get through without submersion – I VERY much appreciate that, considering the nature of the kind of mud at this venue (remember: working cow farm!). The rope climb was from super deep water, and I failed it for the first time I can recall – but I made the spear throw, so I’m fine with that 🙂

Elsewhere, a new “stairway to Sparta” wall to ladder climb was nice, and some high cargo nets – long boggy stretches of trail and a very heavy herculean hoist before a jump over the fire pit to the finish line – and free beer!

I’ll say it again – I REALLY enjoyed this. Not because it was close to my house, but because they used the venue – for what it was – really well. I do think the venue is probably better suited to a shorter distance race – but counter that with the fact we’ve waited four years for a Super distance, and I’m not complaining too much.

Some people have complained that it was “too easy” – to which I can only say “run faster”. The obstacles were there, and very typical Spartan Race obstacles they were too. If I want *REALLY* hard obstacles, I’ll go to Shale Hill (which intact, I did that very night – more on that in my next review).

This race was firmly in the “we did what we needed to do to get a Super”, and a very fun course it was too. Thank you, Spartan Race for bringing your middle distance event to your busiest region! See you soon for the Sprint.

Special Note: The night before the race, I issued a challenge to the team – help collect trash from the course. For everyone who came off with at least a gallon zip lock bag full of course trash, they would get a code for $5 to our team store. At the most recent count, members of the New England Spahtens were responsible for 12 gallons of trash, collected from course – so much was picked up on Saturday that Sunday’s runners couldn’t fill a gallon during the team wave! Amazing job team! We’ll be doing that again 🙂