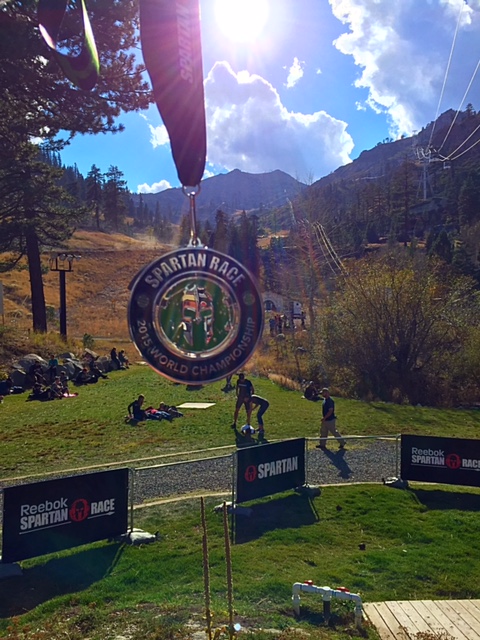 Tony Martinez attended the Spartan Race, World Championships in Tahoe recently, and offered to give us the run down on the experience. #spartanwc15 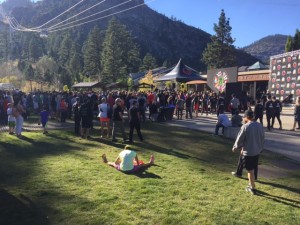 Let me first just say this – this race was not Killington! Tahoe challenged you in many different ways, both physically and mentally. Every race I’ve competed in has been different, be it terrain, elevation, obstacles, or even port-a-potty placement. Point is, each and every race brings it’s own unique challenges in it’s own way. I like to think of these as all awesome little pieces to a much bigger medal that we put together and store in the best metal holder…. Our memories

Squaw Valley is a huge ski resort with an elevation of near 9000 feet and site of the 1960 Winter Olympics. Right as you pull up you get a feeling that this place was meant to hold a championship style event. I was lucky to stay only walking distance away from The Village at Squaw Valley, so getting in and out was very easy and convenient. The Village is the large center point of the resort filled with shops, restaurants, bars, and more. This was a awesome feature to have at a race of this scale. The locals who worked here were all super friendly and very helpful recommending places to visit in the Tahoe area and just overall happy to have the activities that this race was bringing in. The base of Squaw sits at about 6200 feet and you almost forgot that because of the monster terrain that looks down at you from all around. The festival area was well set up and spread across the back side of the village buildings right at the mountains base. All the normal activities were there, SGX Rig, Panasonic, Fit Aid, etc. nothing really new. The main stage area was large and had a “jumbo-tron” style background that was pretty neat. My one negative was there was no fire jump before the finish, California has been in a drought for a long time and no fires were allowed, so that was a bit weird not to see. Overall I think this was one of the better set ups I’ve seen for a large scale event, it felt alive and fun – just what you want to experience in a festival area. 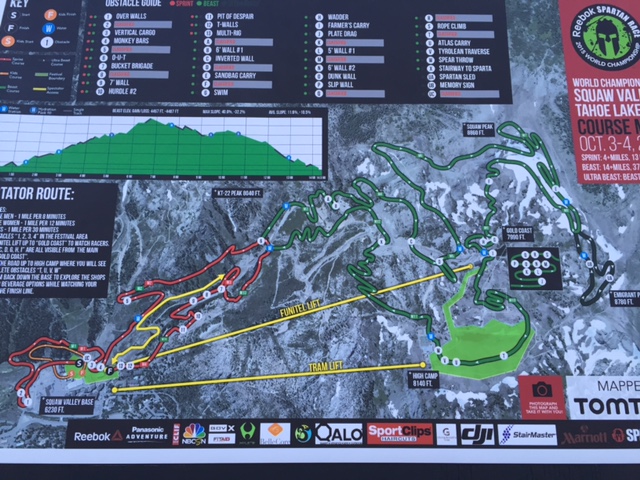 Squaw Valley is simply amazing! The beauty in it’s terrain is breathtaking (wait maybe that was the elevation 😉 The race was a ultimate mental and physical challenge that was truly a test on any level of racer. I ran the elite non coin holder wave on Saturday that went out after the Woman’s Championship (coin holder) wave at about 8:15am after some slight delays due to NBC and the “start” arch deflating.

It was a very cold start temps were only in the low to mid 30’s as we took off. The course was described to us as pretty much a straight up to straight down style of race with lots of single track running and about 38 obstacles. After about 2 miles of some mixed trail and downhill single track running it was all up from there. The climb were long with some walls, over/under/through type obstacles to mix it up. We peaked at about mile 7 at about 8000+ feet right to the sandbag carry.

The carry was steep and long on one of the high test peaks, it was cold, very windy and for me it felt like someone was standing on my chest while I was trying to breathe. I felt that my breathing was good considering the elevation, however, as I hiked I was moving at about a 13.5 – 14.5 per mile pace, I never had a second gear, you know, that one little extra push. My mind wanted to go but the body did not, was a totally new experience for me.

After the carry, we started our descent to what would be the single most challenging obstacle I personally have ever faced….. The Swim! This took a lot of good racers out due to the 40-45 degree water temp and the wind whipping around, “hyperthermic” was a word I heard a lot. The swim had a mandatory life vest wear and it was a good thing cause as soon as I hit that water it took my breath away. In only about 10 feet into the swim my body was numb and it took everything to make the 120-150 yards out. Once I got out it was the coldest I’ve ever felt.. Ever! Only option I had was to keep moving and get the blood flowing. 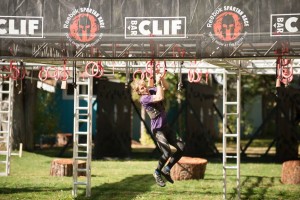 The open wave did have a “burpee out” option of 60 burpees if wanted no part of the water. At mile 8-10 was a really fun but challenging part of the race. It included the farmers carry x2, plate drag, barbed wire x4, walls x4, dunk wall, rope climb, A frame cargo, atlas carry, tyrolese traverse, and spear throw. I heard the barb wire crawls being called the snake, Aww hell no, fu&k this, and grrrrrrrrrr, it was a pretty hard challenge being so cold then getting wet again at the dunk wall. Lots of cramping all around. 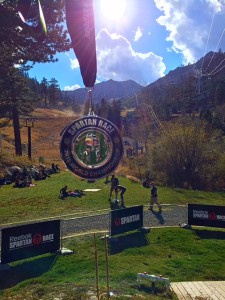 From there it was a good descent run down to about mile 13.5 to the bucket carry. This was tough! The buckets had to be filled with a mixture of wet dirt and mud, you really had to pack it all in there because the dirt settled much lower than stone. I heard reports that a bunch of runners had to do it twice because of this. From there, another short descent to the finish but first you had to complete the “t” wall and then a double length multi rig (pipe-rings-rope-pipe-rings-rope-burpee) wait – I mean Bell. There was a large crowd at the rig and it was really awesome hearing them cheer all the racers on as we attempted the rig. At one point in the race, I passed an elite female and she noticed my NES sleeve and yelled out “Go Spahten, you guys are everywhere!” That was pretty cool. The finisher tee and medal are awesome with a new “worldwide” style logo on the tee and the center of the medal spins… Awesome!!

Finally, Tahoe was an epic race at an amazing venue and I know there will be comparisons to Killington. Was Tahoe VT? No! Was VT Tahoe? No! For those who ran both I’m sure you feel the same. Tahoe truly tested all aspects of Spartan Racing, running, strength, endurance, and pure will. Tahoe’s terrain vs. VT can’t be compared, with one not being better than the other. Each race brings different factors/challenges at every start. Where finishing times faster in Tahoe then VT… Sure were, but hey this was the World Championships you’re supposed to go fast 😉 I will totally go back in 2016 if Worlds are held there and I fully recommend this race to all. 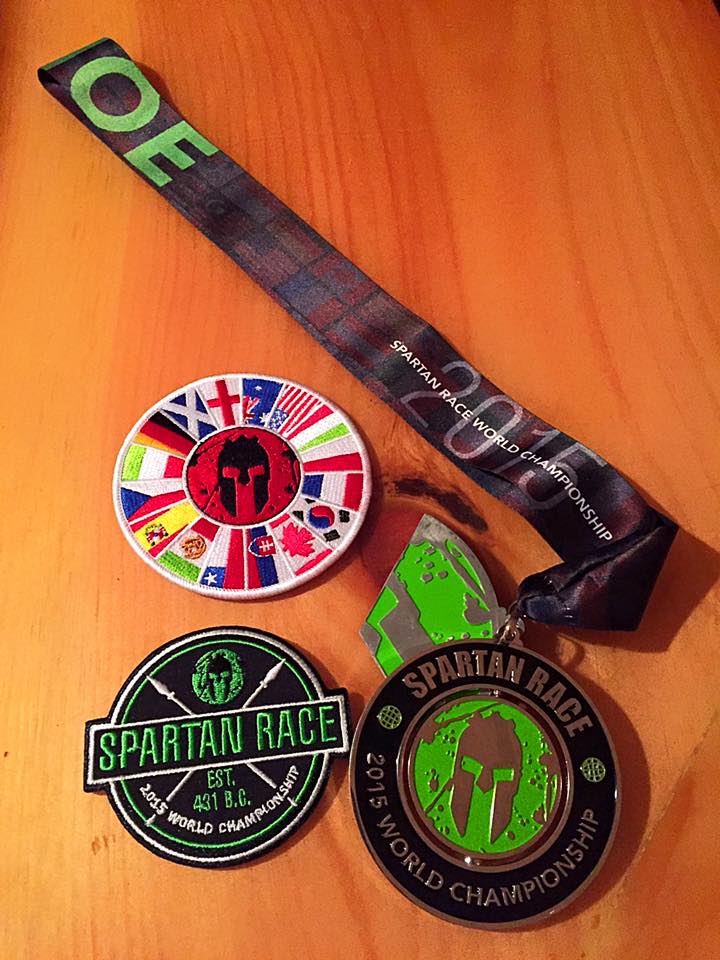